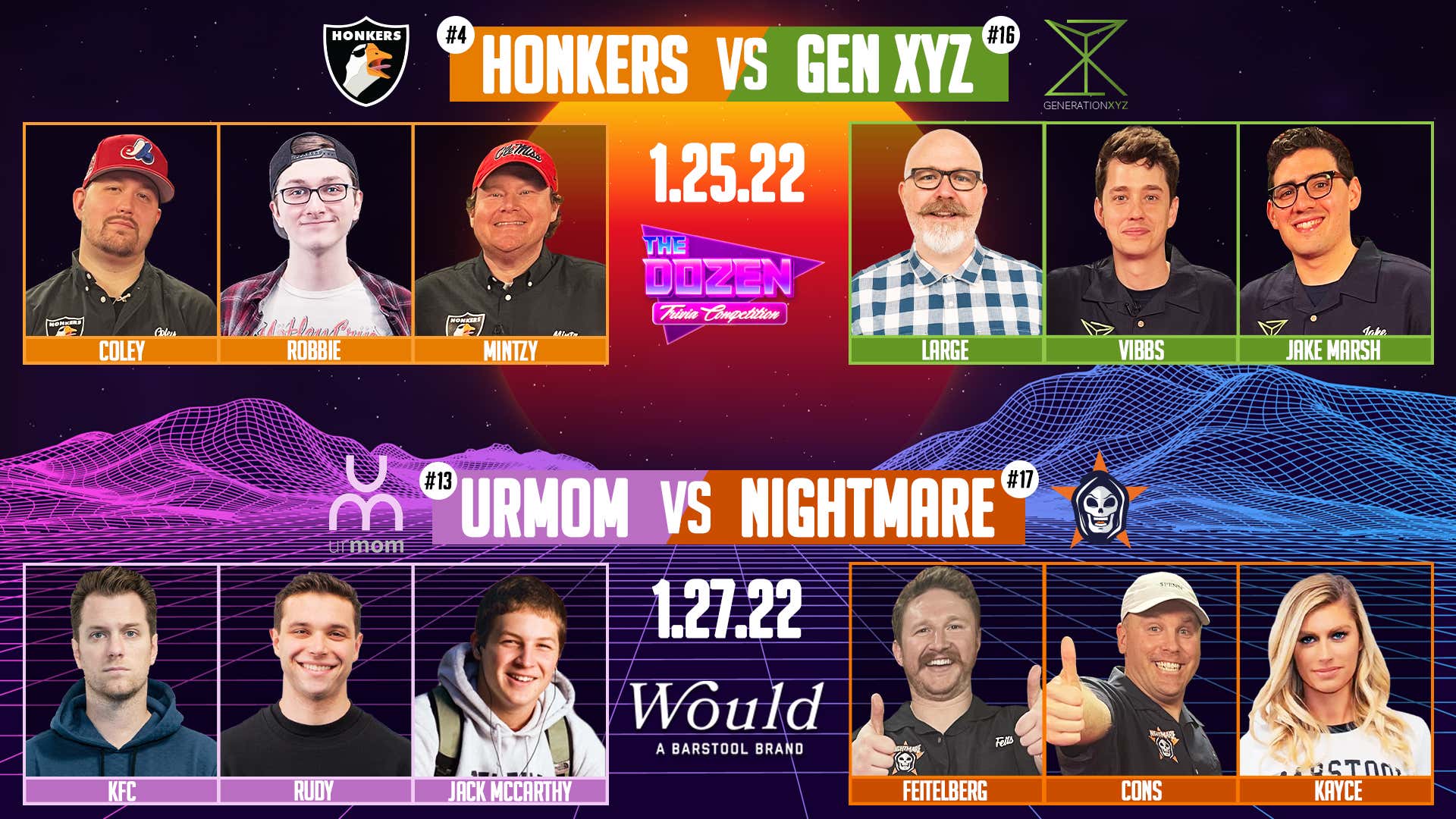 Every other week we drop our new rankings (half voted on by fans, half a combination of a bunch of nonsense algorithms, strength of schedules, records, points scored, etc). Here is where we stand going into Week 27… 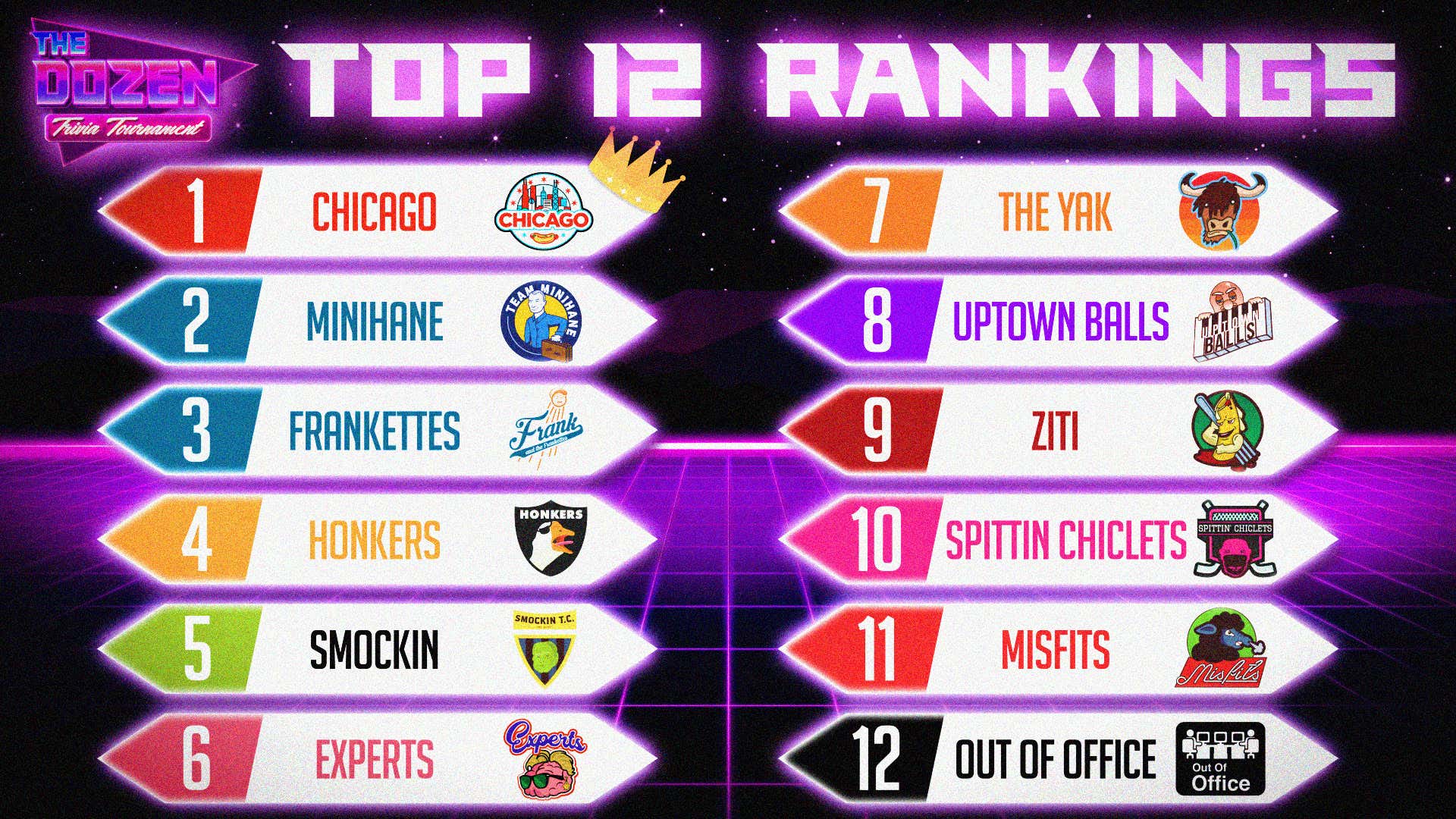 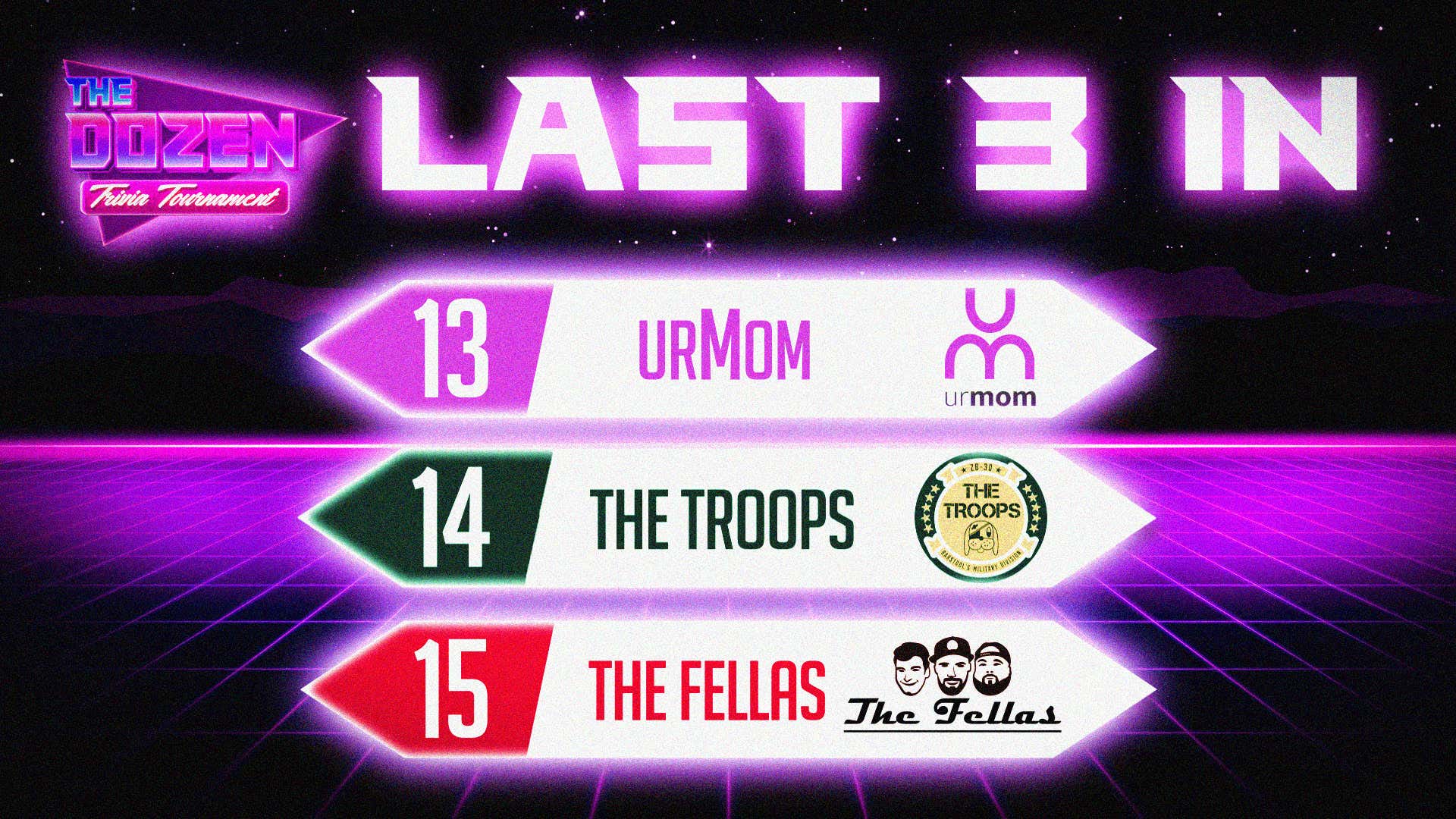 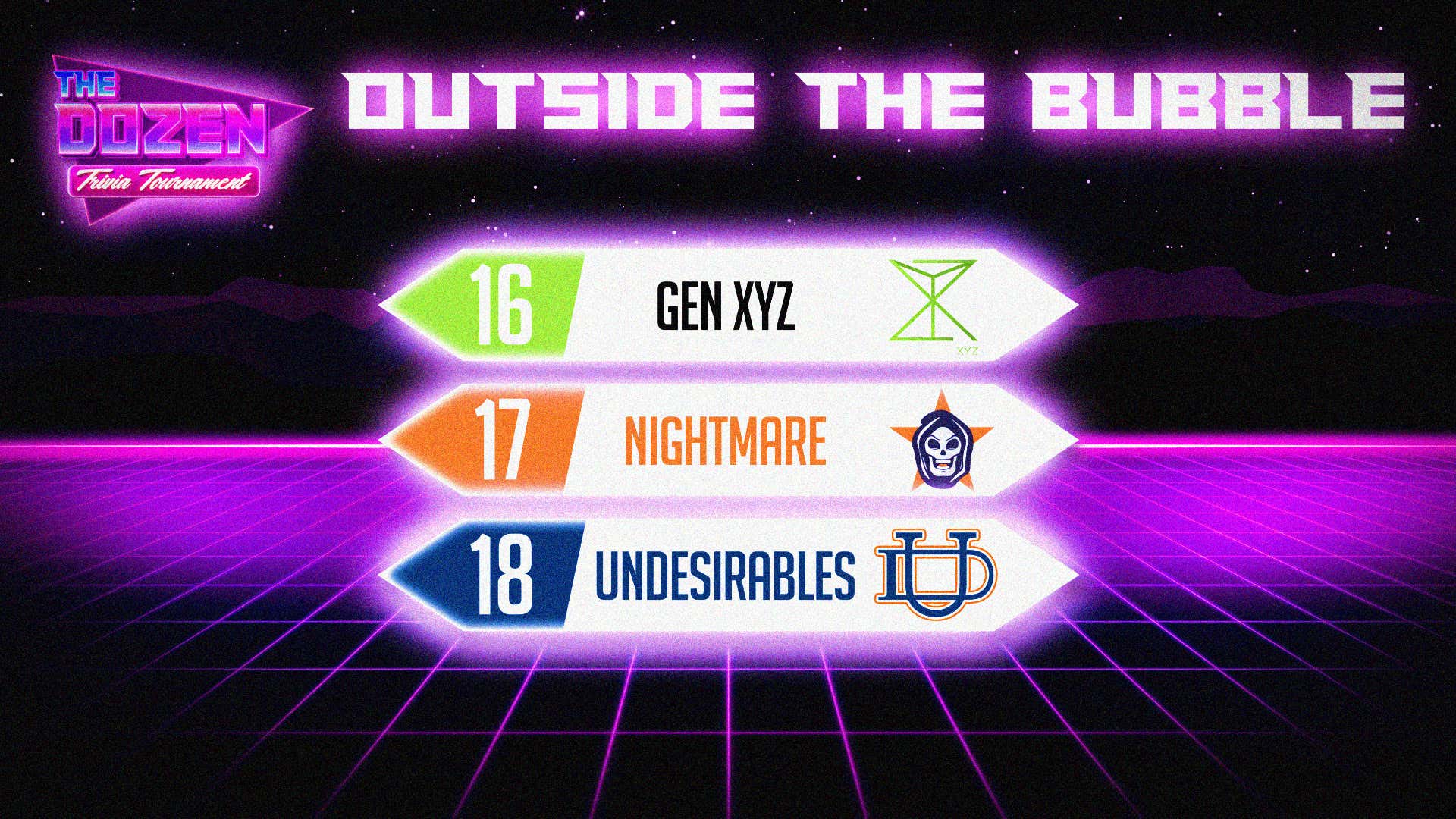 Here is the bracket if the season ended today… 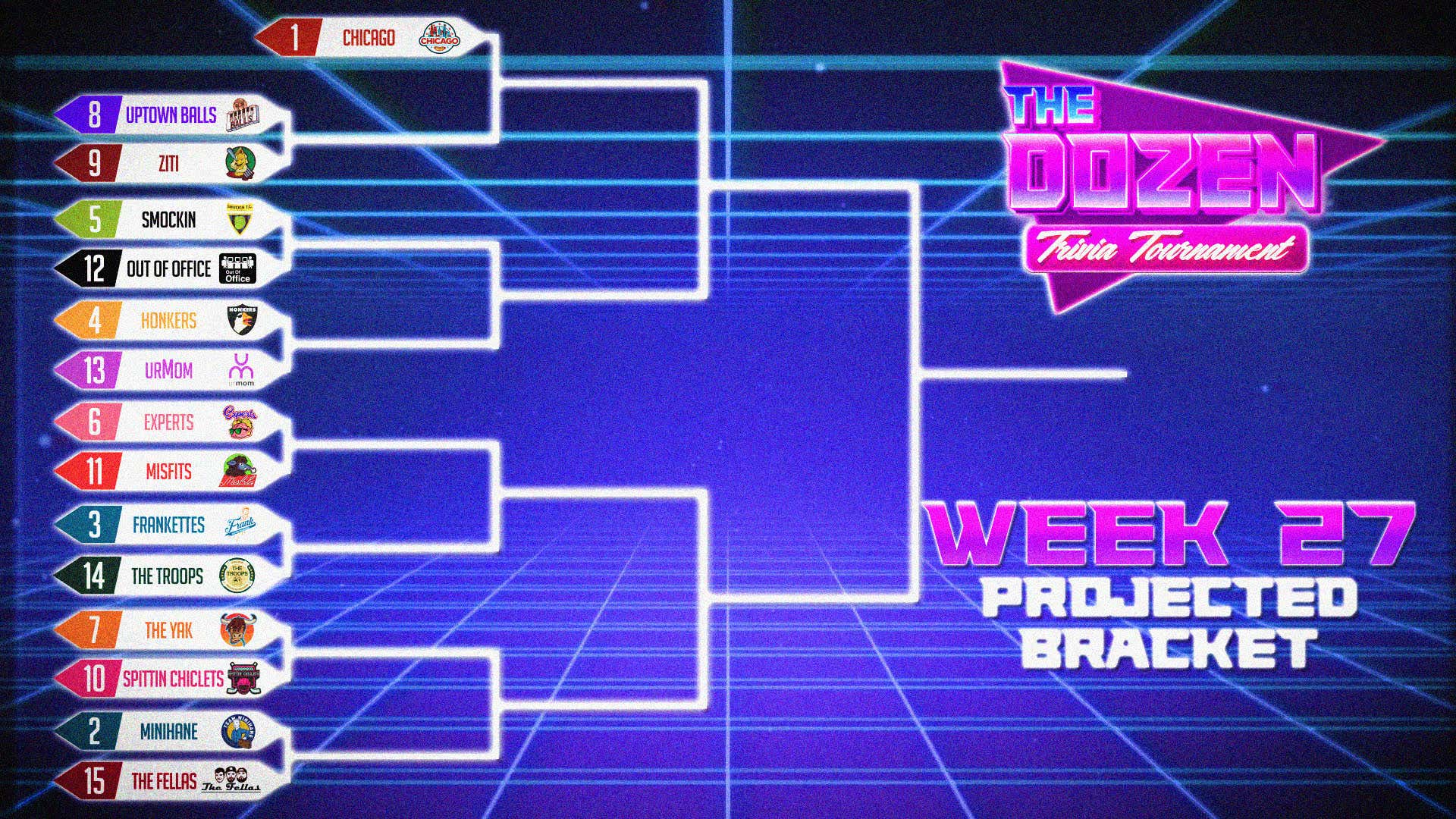 We are a long way from crowning a champion for Season 2, but the tournament is going to be absolutely wild.

The week opens with a rematch of last year’s tournament semifinals! After taking out Spittin Chiclets and the Frankettes in the tourney, Gen XYZ had their season ended by the eventual champions, the Big Screamin’ Honkers. These two teams have gone in way different directions since their tournament encounter. Following their title win, the Honkers have maintained their success during Season 2, having held the Crown this season and setting the record for most points scored in a single Dozen game. Meanwhile, Gen XYZ has dropped five out of their last six games, and there have been rumors that Jake Marsh might have gotten offered up in potential trades.

When you look at the numbers, all three players on Gen XYZ are solid, can contribute in random categories, and have some mastery areas (College Basketball, History, Food). Hell, Large is one of the best players in the Dozen. So what are they lacking? Maybe it’s just luck. XYZ is one of the streakiest teams in the league. During their tournament run, XYZ put up points in spurts; even this season, their one win was a 17-point outing. Going against a juggernaut squad in the Honkers, XYZ better hope luck is on their side.

Some key categories to look out for are Movies, Music, & College Basketball. Even though College Basketball is one of Jake Marsh’s specialty categories, XYZ should not double it because if the question is outside his year range, Coley could easily steal, just like he did to Mark Titus in the Honkers game against Team Smockin earlier this season. Coley & Robbie usually are a formidable squad in Music and Movies, except Large & Vibbs can hold their own in those subjects as well; these are the battleground swing points that could determine the game.

Nobody in the league needs a win more than Team Nightmare. They’ve lost five straight games dating back to the tournament, have gotten blown out in three of them, and currently average more original questions stolen from them than they get correct per game. Another loss for Team Nightmare and their tournament dreams could be out the window. Lost among all their failure is that Feitelberg has been a decent player this season, specifically elite in the Television category. Feits watches all the B-TNT and USA Network Dramas that have you asking, “Who the hell watches Rizzoli & Isles?” John Feitelberg, that’s who. If Nightmare fails to make the tournament, a team weak in Pop Culture categories (Movies/TV/Snacks) should look to make a trade/acquisition for Feits.

urMom could use a win after losing four of their last five games. They are a good team who have been a victim of a strong strength of schedule. Their previous two losses were close battles against the second-ranked Team Minihane and the third-ranked Frankettes. One of the main reasons why urMom has not been able to pull out wins against some of the elite teams in this league is they struggle with the major sports (Baseball, Basketball, and the NFL). Where they beat up on teams is in Movies, Television, and general Pop Culture. While Rudy has been the break-out star for their team, don’t sleep on KFC, he’s consistently put up points in random categories and been an excellent glue-guy for his team. A win this week should get urMom back on track and in the Top 12. Although, a loss to Nightmare would get them in a scary territory in terms of the rankings.

Looking at the match-up, urMom is easily the favorite. For Nightmare to win, they’ll need to pull out the Bonus Round, their niche question, and hit their questions in key categories (NFL, College Football, and Television).

Here is the most recent match…