I’m not calling it must watch, but for all my intramural diehards out there it’s still kind of a must watch. A retired minor league baseball player has quite literally made his life all about hitting bombs, throwing gas, and just generally being awesome at anything that even remotely requires explosive athletic ability. His name is Eric Sim and he's quite possibly my favorite non Barstool content guy on the internet. I cannot recommend his stuff enough.

You might think I'm joking, but literally all this guy wants to do is break the radar gun. Think Domingo Ayala or Kent Murphy but like an actual real 33 year old guy who played pro ball for a number of years and now just hangs out doing cool shit with his friends. Like crashing 12-inch softball games with Trevor Bauer or taking live AB's off Eric Gagne. His YouTube page is littered with preposterous shit and it's all he does. One of my personal favorites is when he just drives around paying cash to strangers to see their four seam fastball. Kinda like the Bangbros Bangbus except it's this massive Korean dude with a radar gun and bag of baseballs. It's downright electric.

If I can (at a minimum) bring awareness to what he's doing then that's a very good thing. Guys like Sim make the internet a special place. I know of Sim from college days (story below) but got to know him personally this summer at the Field of Dreams game. If you remember it's the game that Red Line Radio came back and won in utterly dramatic fashion.

And now that I've introduced you to Sim, I can now share one of my favorite baseball stories. We played against each other in college. He was the catcher for USF and was a name you were aware of because he hit tanks and was gigantic. Although to be fair I remember our contest for a completely different reason. It's nothing to do with him going 0-4 (but still getting intentionally walked.) No. I remember because your boy Carl manufactured an out from the bench when I caught Sim's asshole teammates batting out of order in the 7th inning.

I have the following framed over my bed:

Coach didn't believe me that Kosco hit in front of Falla. I had to show him the lineup card. 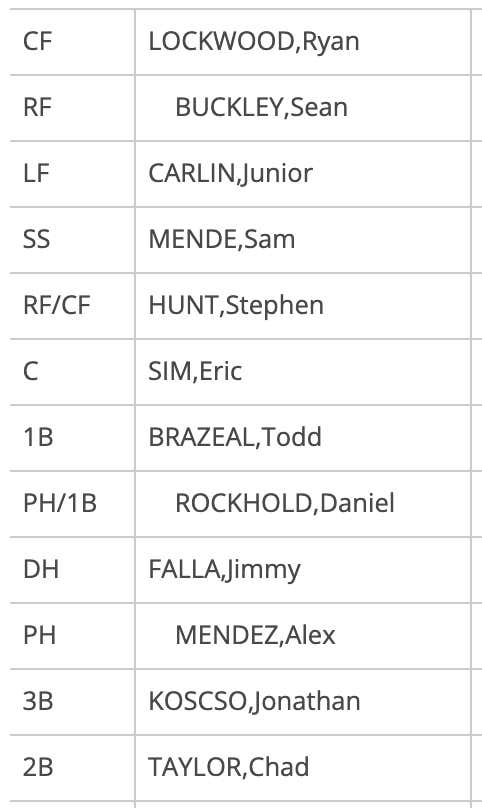 Koscso was hitting 8th all game and then he just jumps DH Jimmy Falla in the 7th inning? Not on my motherfucking watch. We may have gotten our dicks smashed in but that never stopped me from hawking the game. Truthfully it never will.

PPS - I was unavailable that game after throwing 3 scoreless in relief against Notre Dame the night before. Otherwise we probably beat USF. Let the record show.

PPPS - go follow Sim. He literally is the King of JUCO