By now, as much as maybe want to believe that "caring about the lives of celebrities is stupid and meaningless," you have at the very least seen the news of Megan Fox and Machine Gun Kelly's engagement. As a girl who has seen no less than one million engagement rings over the years, both celebrity and in real life, I regret to inform you all, that this one is a Top 3, maybe Top 1 ring.

Was the engagement itself good? Sure. Multiple camera angles, Megan looks hot, MGK looks like Beetlejuice, all seems on brand for them. But the ring...it has meaning behind it, it fits their vibes perfectly, its different, and its stunning.

"But Kelly! What about Indy Blue's ring!! It's basically the same! This isn't original!"

Yes, I've seen all of your messages. To which I reply - who is Indy Blue? Answer: she's a Youtuber/Influencer with a little over 300k followers on instagram, and a little over 100k followers on YouTube. Sadly I had never heard of her before, she seems cool, but…you guys have to get a grip. There's not a chance in hell that MGK got his idea from this ring. To be fair, the "two stone" ring has been very popular since EmRata got one:

The difference here, is that the stones in Megan's ring represent birth stones. April, is a diamond (MGK) and May is an emerald (Megan.) Case closed, it belongs to them. Can I say, even the bands are perfect? They've said nothing about snakes, but don't they kind of look like snakes? It just…really really good. Turns out, I'm not the only one who thinks so:

Even my girl Fran agrees: 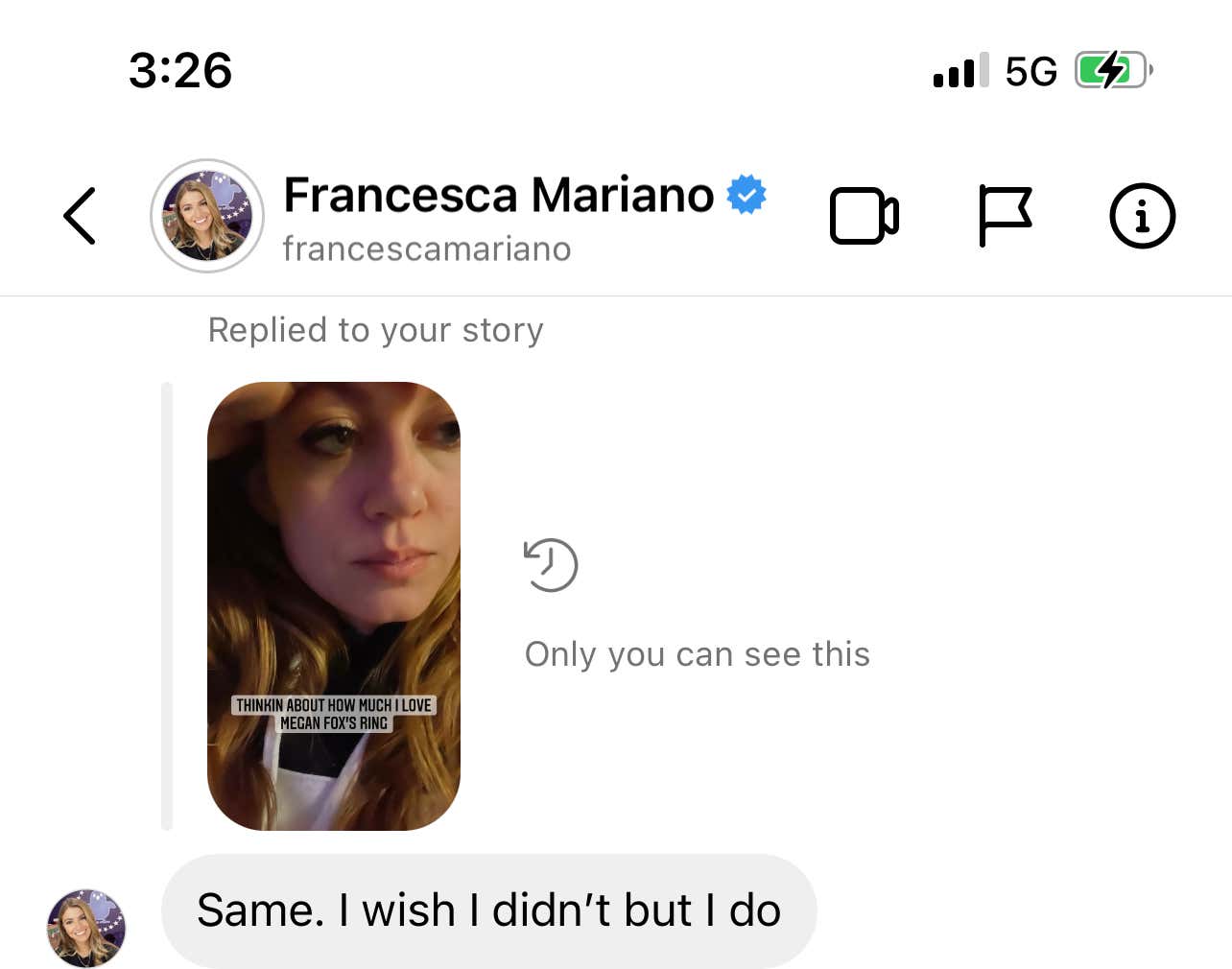 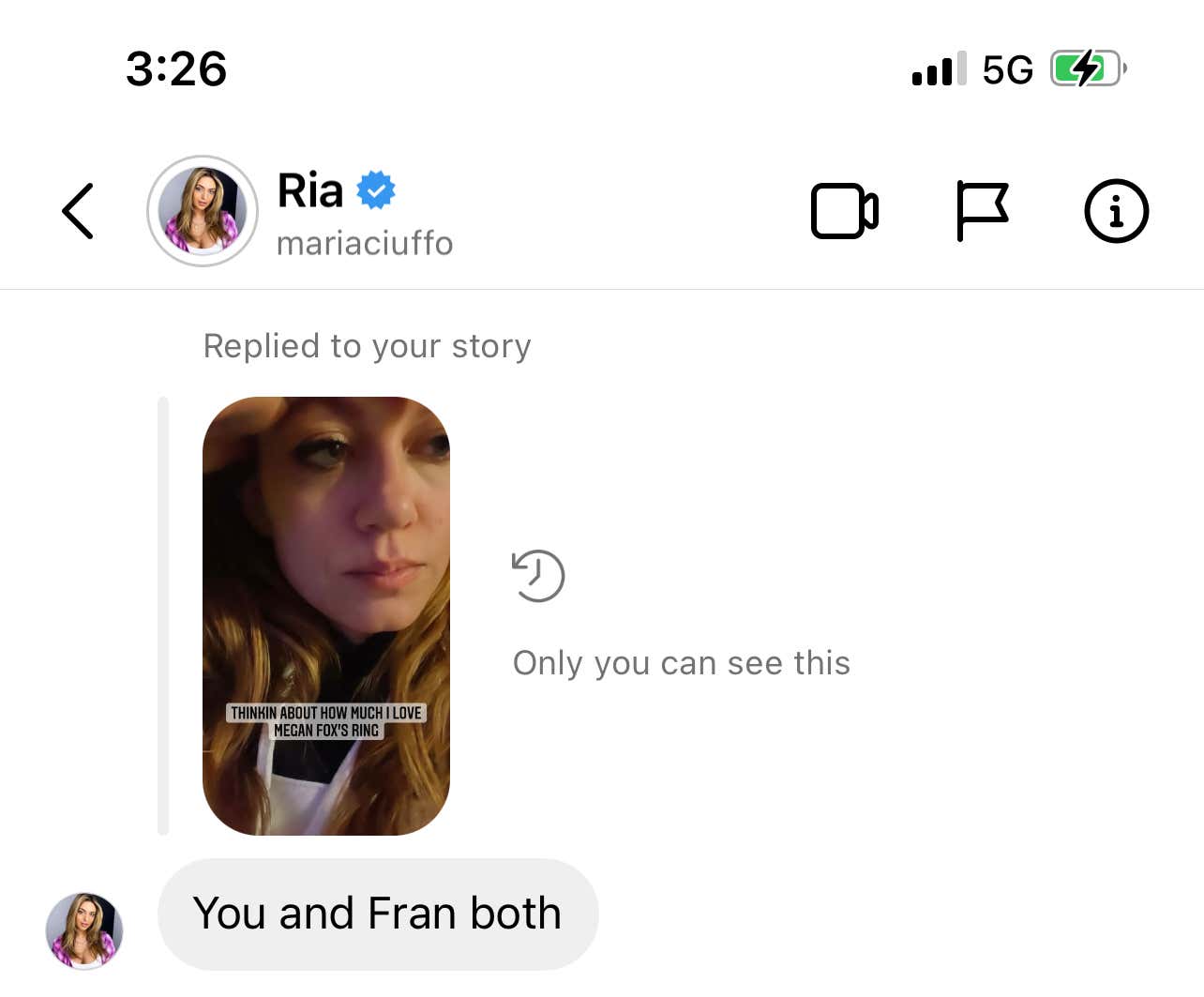 Why do we care so much? Why are we mesmerized by this? Why are we setting back independent women thousands of years by screaming OOOOO and AHHHHH over this celebrity engagement? Thanks to this article, I think we've figured it out:

As a woman who has been dating her boyfriend for the past 7 years, bought a home and moved in together for the past 1.5 years, my perspective on an engagement ring is simple.

I think I just want one.

I’m not trying to sound desperate but it does cross my mind sometimes.  The ring symbolizes a lot in our culture and our society. Whether we like it or not, the engagement ring and weddings are symbols of life transitions and moving from one area (young adulthood) into another area of your life (cohabitation and possibly children). These symbolic meanings can’t be easily brushed aside, especially when you have your parents, your grandparents, your siblings, your cousins, your friends all breathing down your neck and wondering when he is going to propose and when you are going to get married. It also symbolizes that someone wants you enough to want to settle down with you and get married. I know that I sound like an hypocrite feminist out there, but things like these are so ingrained in us even while growing up that it’s hard to just shake off.

We just want one. We want the security it brings, we love anything involving symbolism and a little bit of extra thought, we want something that is OURS. It's like a talisman to shove in everyone's face that says "yea, read it and weep, bitch, I'M WANTED." It's absurd, but its true. And Megan, who has seemingly accomplished the task of wrapping a rock star around her finger (literally), has set the new bar. Like it or not, MGK is one romantic motherfucker. Their love is real, pure and selfless (so it seems.) We now officially buy this love story, and we can't wait to watch it unfold. I'll also say this - I am VERY pessimistic about celebrity marriages, considering they almost always end in a spectacular fashion, but something about this one makes me think these two crazy kids are in it for the long haul.

Congrats to the happy couple!!