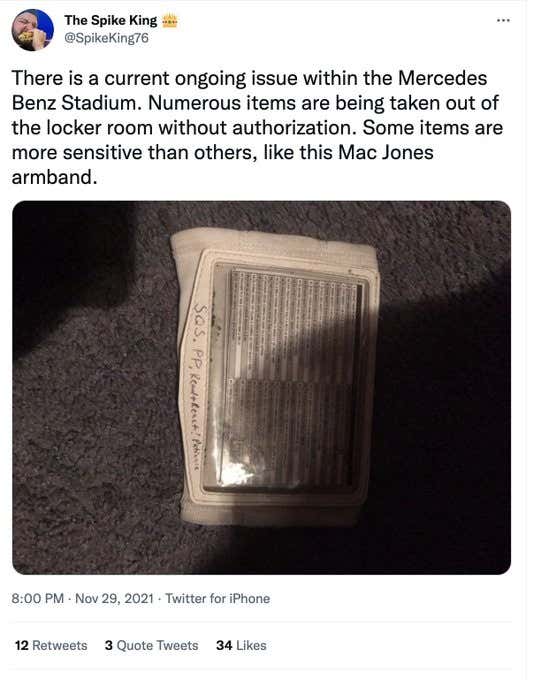 I take a back seat to no man when it comes to my enjoyment of a good Patriots cheating scandal, particularly when they are the victims in the arrangement. No one spent more time on, say, the Jets tampering with Darrelle Revis or the NFL's subsequent slap on the wrist. Or the Ravens using the very same ineligible receiver formations they got the league to ban when the Pats sprung on them to win a playoff game. Not to mention all the various incidences of dome teams piping in crowd noise and coaches being caught using phones on the sidelines. And what ultimately was Deflategate than the Pats being victims of collusion between the Colts, Ravens and the league?

Which is why, as much as recent Do Your Pod guest The Spike King has done a great job staying on top of this matter of Mac Jones playsheet wristband ending up in the possession of the Falcons and Billy has been posting about it:

… and I'm glad the Patriots are demanding an investigation, I'm not worried.

In fact, while I have no doubt the Falcons have been passing this thing around and deserve to be punished for possessing it, the whole issue is a Quarter Pounder Nothingburger with Cheese. I promise you.

Because you know who has seen this wristband before? Everyone. Which is to say, everyone with the 10 bucks it takes to get into the Hall at Patriots Place. I know, because I've been there and seen this very thing. In fact, USA Today wrote about it five years ago:

See for yourself. Just because you find a piece of paper with "0 ON SLOT R-136 Y FLAG BUNKER TRAIL" on it doesn't mean you can stop it. Or execute it. Your classroom might have the Periodic Table, but that doesn't make you J. Robert Oppenheimer and there's about to be mushroom clouds over the Science building. You can buy the sheet music to "Eine Kleine Nacht Muzik," but you're not going to play it like Mozart. Here, let me give you Newton's Law of Gravitation: F=Gm1/m2d. Got it? Good. Now go build me a rocket to Mars.

If Bill Belichick was worried about this secret code falling into enemy hands, he would've walked the 100 feet from the door under the bridge at Gillette, took this think off the Tom Brady mannequin and set fire to it on the plaza. But it doesn't matter what the words and numbers are. What matters is being able to process it. Understand the concepts and execute them. And rare is the man who can. Leave us not forget Cam Newton is a 10-year NFL veteran who won and MVP, had this thing on his muscular forearm for an entire season, and by his second training camp, reportedly had Mac Jones explaining some of it to him.

In fact, if you want to dig deeper, I've had this PDF of Charlie Weis' 2004 offensive playbook saved to my bookmarks practically since I started writing for Barstool. And still peruse it sometimes to pass those long, lazy summer days. But that doesn't mean I can line up over David Andrews and tell 10 other guys what Mac Jones is about to do with the ball.

So go ahead, Falcons. And any other foreign governments you want to share this proprietary information with. See what good it'll do you. In fact, I hope the Bills, Colts and Jaguars (the Dolphins are also on the schedule, but Brian Flores has all this information already) are trying to use this as actionable intelligence. Because it will distract them from doing any actually useful game planning and waste their time.

I'll go so far as to say Belichick probably had it left in Jones' locker at Mercedes Benz as a disinformation campaign. The way the Allies put fake invasion plans in the pocket of a soldier who was KIA and let him wash ashore in France to fool the Nazis into pulling troops away from Normandy. Either way, neither he, nor Mac Jones nor Josh McDaniels should squander a precious second of their season worrying about it. And neither should we. Let's instead hope the Pats end up with a Falcons' draft pick over this. But knowing Roger Goodell, it's more likely he'll take one away from New England for violating some rule against littering or something.