"From what I gained ... from sources inside the actual building, from everything I understand now, Mac [Jones] was basically helping Cam [Newton] learn the playbook. ...

"Because Mac was having less M.E.s, that's mental errors ... and having a better understanding of the offense. We didn't see Cam running any two minute, we didn't see him run any no huddle. You have to run no huddle. That's vital."

I can honestly say this, without fear of contradiction, that when Ninkovich says he's hearing this directly from sources inside the Patriots organization, you can take it to the bank. Or buy cryptocurrency with it. Or NFTs. Or whatever the cliche is supposed to be right now. And I make this assertion not just because he and I have that friendship that come from that one time I interviewed him in WEEI's Fenway Park studio: 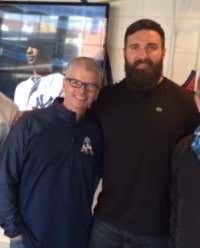 … but because when a guy who played in 123 games with 101 starts over eight seasons in Foxboro and won two rings tells you he's got inside sources telling you a thing, it's gospel. Ninkovich is Patriots royalty. And no one would steer him wrong.

So this, to say the least, comes as a bit of a shock. To quote Clark Griswold, "If I woke up tomorrow with my head sewn to the carpet, I wouldn't be any more surprised than I am right now." To have a raw recruit who first got his hands on the playbook in May explaining it to a 10-year veteran with a season of experience like a kid showing her grandma how to use the DVR has to be the rarest thing that's ever happened in football.

Now, a cynical man who's motivated by negativity might take this as an indictment of Newton. But I am not that man. The final boarding call for Cam Airlines was days ago. He served his vital role as the Man Who Had to Replace the Irreplaceable Man with dignity and honor. And it would be a disservice to dwell on the past. What's done cannot be undone

Instead, I choose to focus on what this says about Mac Jones. About his ability to absorb the Patriots complex system of formations, blocking assignments, pre-snap reads, route combinations, audibles, check-with-mes, play kills and nomenclature in the few months he's been given. And master it to the point he was able to unseat a former MVP and take the wheel of the precision engineered driving machine Bill Belichick just spent a quarter of a billion KraftBucks to upgrade.

And that is something I'm not surprised by. It's what I'd expected back in mid-March when I said, "I have to admit I've had Jones on the brain for months. Every since the losses piled up in New England and it became clear a middle 1st round pick was becoming a reality. While Jones just kept coming up with huge performances against the NFL's minor league, showed poise, command of the Tide's offense, maturity and - dare I say this without those good, moral folks at the NCAA having one of their episodes - professionalism. He's shown all the traits the Patriots seem to prioritize." And what was more or less confirmed a few days ago by the coach for whom Jones threw 57 touchdowns to just seven interceptions for at Alabama: 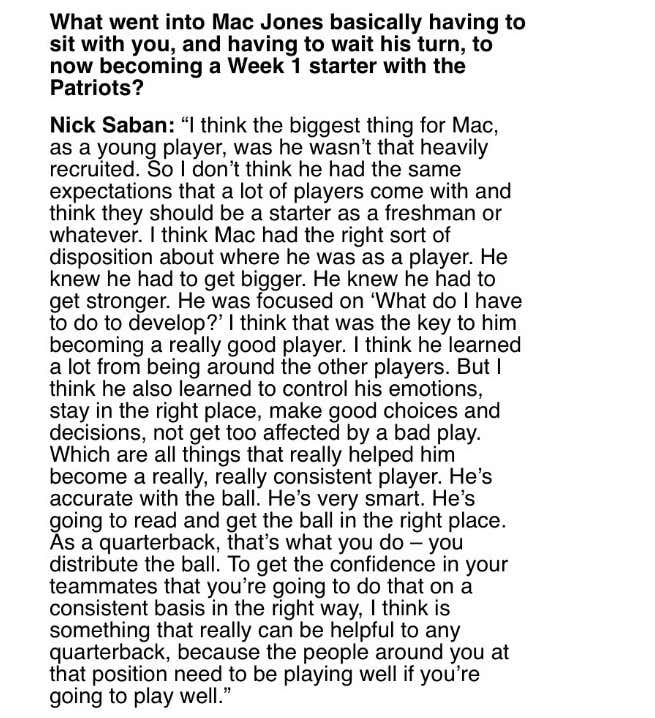 Let there be no question that the Mac Attack has some bad Sundays in his future. They all do. Leave us not forget that the first category Peyton Manning led the league in was interceptions, with 28. It would be his career high. The point for the here and now is that he won the starter's job while Newton was playing the best ball he had in a Patriots uniform. He did so by showing a command of the system and applying it in practice and preseason games and by limiting his M.E.s. And that is all you can ask of your Franchise QB.

Well, that and this:

Now if you'll excuse me, I've got to get back to my Saturday. Which will be spent with a lot of "alone time" listening to Ninko say this over and over again.