There are two things in life that are guaranteed to give me goosebumps. One is the "banner yet wave" part of the National Anthem at a live sporting event. The other is a huge Survivor blindside. Well, last night gave me a ton of goosebumps and I was not listening to the Star Spangled Banner. That was the best Survivor episode of the season by far. It was everything Survivor should be. No twists and gimmicks. A reward challenge. An immunity challenge. Social relationships. Strategy. Cut throat gameplay. A ruthless blindside. Just classic Survivor.

Instead of doing my full recap today, I'm just going to bullet point some key takeaways from the episode. If you want to hear our full recap, me and Jeff D Lowe did a great one last night that will have you covered. You can listen to that above and subscribe to Snuffing Torches on Apple and Spotify.

Here are some key takeaways I had from last night:

-Ricard is an unbelievable Survivor player. He is a cold-blooded assassin who doesn't let any emotions cloud his judgement. He's level-headed, strategic, and a stone cold killer. Let's think about a couple key moments that happened in this episode which highlight that. First, you had Shan coming to him and telling him that Deshawn and Danny were gunning for him before the immunity challenge. He calmly said, "Let me process that." He was actually surprised Shan told him because the two of them had an understood agreement that they'd eventually need to come for each other's throats (as I've predicted all season). A lot of people freak out in that situation when hearing their name is on the chopping block. Not Ricard. Then after he wins immunity and is safe, he doesn't target Deshawn or Danny who wanted him out. No. He actually targets the person he's closest to who told him the plan! This is ruthless but exactly how Survivor should be played. So many Survivor players would've just said "Oh I have to get Deshawn out because he targeted me." But Ricard realized this was actually his best chance to make a play against the biggest threat in this game: Shan. That is cold, emotionless Survivor. And that's the Survivor I love.

-Now while I do say that, I also think last night highlighted that at the end of the day, Survivor is truly a social game. Ricard is the exception, not the norm. You saw Deshawn and Shan wrestling with the decision of keeping their all black alliance versus looking out for themselves as individuals. You saw Liana run and tell Shan the Danny/Deshawn plan to blindside Ricard because she felt the most connected to Shan of everyone in this game. That's how a LOT of Survivor players operate. They let their emotions and personal relationships dictate their decisions. But then you occasionally get a player like Ricard who can play the game emotionless, and that's a huge advantage. But you also need to be able to build those relationships with people to get allies. You can't be too much of a "gamebot." But when the time comes, you have to be able to break them. If you have the ability to build genuine relationships, and then break those genuine relationships, that is the sign of a truly great Survivor player. Tony was the best at that. Ricard is pretty damn good too.

-Shan is a great case of peaking too early. She dominated the pre-merge part of the show. It felt like she had winner written all over her. For a lot of this season, it felt like it was "The Shan Show" and we were seeing the game through her eyes. But she screwed herself. She was a horrible alliance member and didn't listen enough to her allies. She was too set in her ways. It started with the Ricard extra vote fiasco and continued with Deshawn and others at the merge. She just got very annoying. I still think she has the potential to be a good player in a returnee season if she can fix some of her flaws.

-Shan did Ricard NO favors on her way out. Saying "Ricard you have my million dollar vote. Deshawn, you're a snake." That paints a huge target on Ricard's back. Not sure he can survive it for all these votes down the stretch. Maybe Shan did this as revenge on the way out? But I doubt she was thinking that diabolically seconds after being blindsided.

-I was surprised they didn't think to use Ricard's extra vote to get Shan out. It was Ricard, Heather, Erika, and Xander and they needed to flip one more to get a majority. It seemed like the idea of using Xander's extra vote to make it 5-4 was never seriously considered. Maybe he was just adamant that he didn't want to use it, and we didn't see that. Seemed like the perfect time to do it though. But it was no matter since they were able to flip Deshawn and Danny and split the vote anyway. Erika almost screwed herself by coming up with the split vote plan and exhibiting what a strategic player she is. But they stuck to the plan and executed it flawlessly.

-Xander is now at Final 7 with the only advantages in the game: an idol and an extra vote. He's also not so clearly on the bottom anymore. He may be able to pull this off. Although I'll again say I think he's more of a golden boy/underdog 4th place finisher than a winner.

-Speaking of advantages, will we see another idol put back into the game next week? Two people in a row have now been voted out with idols in their pockets in Naseer and Shan. I think we might see something put back in the game.

-The teaser for next week showed a huge twist. There's rumors circling on Survivor Reddit about what it could be. Here's what I've been told. It's a slight spoiler so only read if you wish. 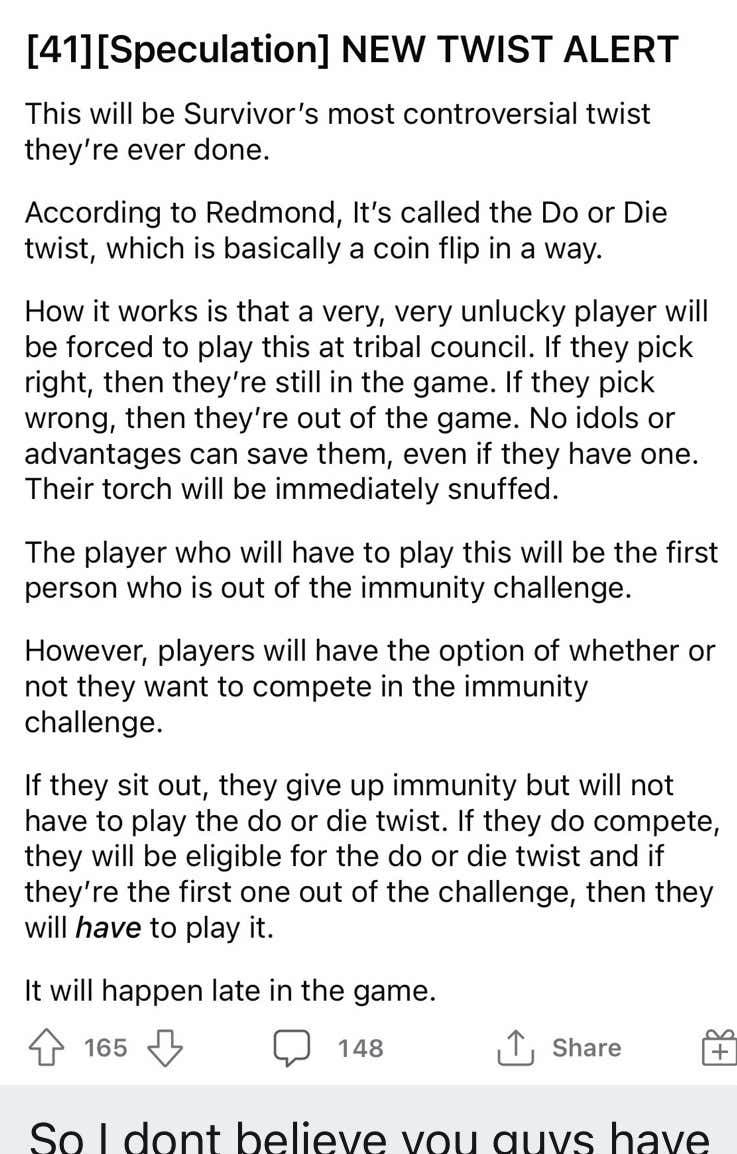 That twist SUCKS. The speculation is that it could be Heather who falls victim to it. There has to be a reason she's this under edited. She either pissed production off or goes home in brutal fashion. This would fit that bill. Survivor isn't going to build someone up as a fan favorite and then have them go home on a stupid twist. So she's a candidate in my book.

-I miss seeing the jury walk in at the start of tribal council. Another thing they took away for no reason whatsoever.

-I would never try in an individual reward challenge like that. You're just going to piss people off with your selections and put a target on your back (like Ricard did). Also that pizza was probably horrible. And by the way, I thought it was very funny when Shan and Ricard were having their deep conversation on reward and then the camera zoomed out and Xander and Heather were just sitting right next to them.

-I do like that classic immunity challenge they had, but it feels like that's now 3 or 4 challenges in a row of very similar ilk. Line everyone up at a station and have it be an endurance challenge of some sort. Wonder if we see a shake up next week.

-Again, just want to reiterate what a great episode this was. The editing and storytelling was phenomenal. They did a great job all season building up the Shan and Ricard relationship and you knew it was going to come to a head eventually. And it did last night in spectacular fashion. Well done.

1. Ricard - the clear favorite right now. He's the best player. Great edit. Would get jury votes. The question is if he peaked too soon. Can he survive with this target on his back?

2. Deshawn - I have liked Deshawn as a potential winner all season. He was my preseason pick and stayed high all season long. He's smart and has a good edit. But will he be labeled too much of a snake like Shan said?

3. Xander - He is all of a sudden in a very good position. An idol. An extra vote. Not clearly on the bottom. Plus a massive challenge threat. If he gets to the end, he probably wins. But can they let him get there?

4. Erika - She is a smart player but has been way too under the radar. In this age of Survivor, I doubt they would under-edit a minority woman winner so severely.

5. Liana - Her stock has taken a serious tumble since the merge. Her closest ally is now out. She'd have a hard time getting jury votes too.

6. Danny - He's just been so under-edited that it's hard to imagine him as the winner. And I think people suspect he's a former pro athlete which will hurt his million dollar chances.

And that's a wrap for the recap. A reminder that the entire Barstool store will be 20% tomorrow for Black Friday. And we have this awesome Survivor Ugly Sweater available.

Happy Thanksgiving everyone. I'm thankful for the greatest show on TV.