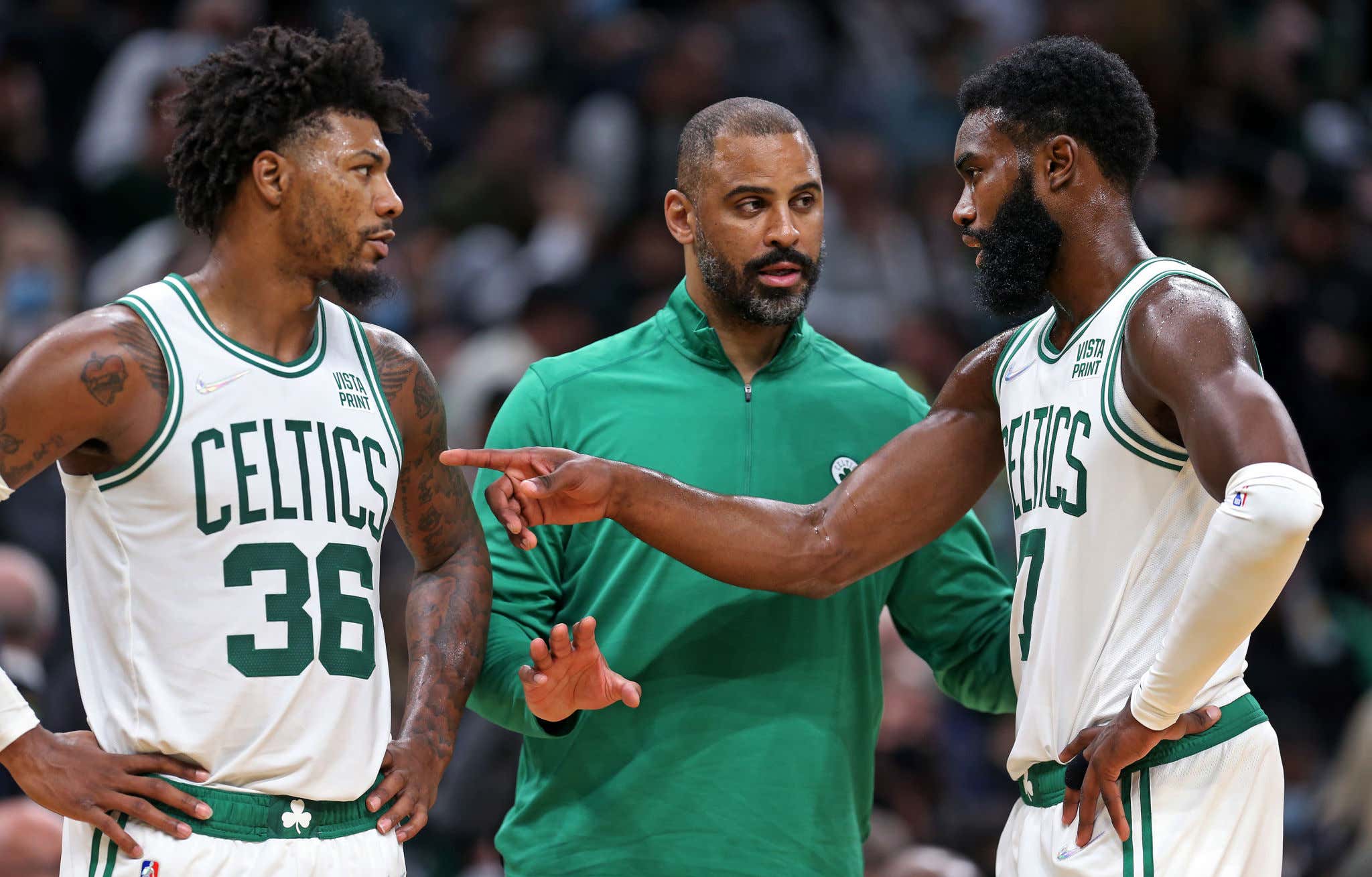 One of the most infuriating parts of the Celts 2-5 start was the fact that it didn't matter who they played, they couldn't stop a nosebleed. They were giving up points like they were destined for the high lottery. Ime's switch everything defense was not exactly the most lock down approach we've ever seen. They were 25th in the league in defense, giving up 119.7 points a night (30th). As you can expect, their record was pathetic.

A combination of guys getting more comfortable in his system and some tweaks in terms of not switching 1-5 every single goddamn possession has been a godsend for this team defensively. Since that 2-5 start, the Celts are 1st in the NBA defensively (100) and are giving up just 96.5 points a night which is also 1st in the entire NBA. It should be no surprise that their 8-3 record trail only the Suns (13 Ws in a row), Warriors (best team in the NBA right now), and Nets (superteam) have more wins over that span. Now, of course when talking about that stuff you should also acknowledge that their schedule does help that cause. Games against the Magic, Thunder, Rockets, Bucks w/o Giannis and Middleton are going to help you look pretty good. But there are also wins over MIA/LAL/CLE/DAL where we saw this team be just as nails defensively.

What I found interesting is that so far this season, it doesn't really matter what lineup combination Ime uses, those guys are defending at a high level. Look at the group of lineups that have played at least 19 minutes together this season. Everywhere you look you see elite defensive numbers 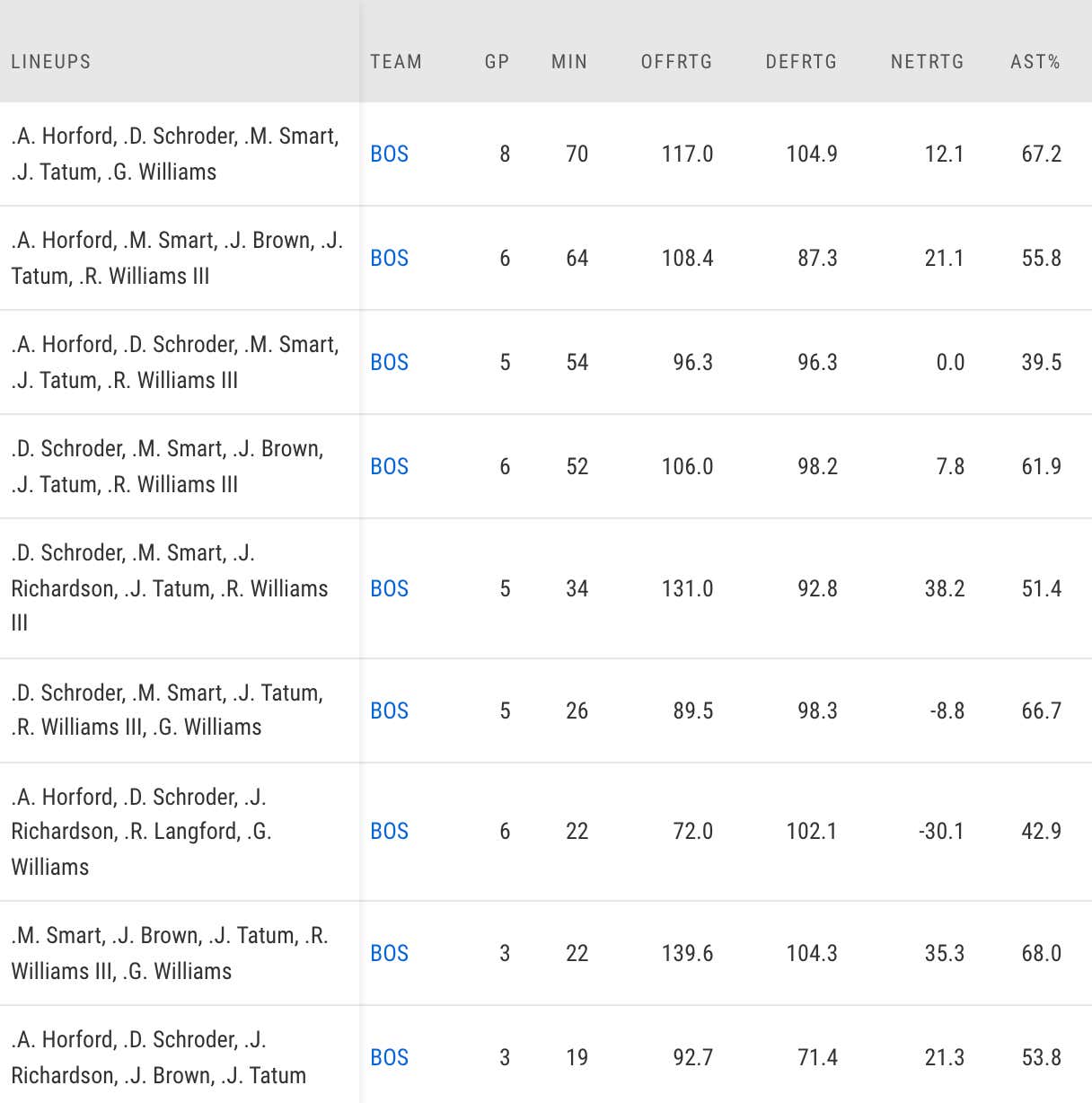 For reference, the Warriors on the season have the best Drtg in the league at 100. We'll see how they look tomorrow against BKN, but I think it's OK to say that a big early season problem has been addressed and vastly improved.

In looking at their roster, this shouldn't really surprise you. We knew they could defend. Last year was the first year basically in Brad's entire Celtics tenure that they didn't. Injuries, covid, player regression, effort, it all played a factor. None of that seems to be an issue so far which is a relief. The backbone of this team will always be their ability to defend.

But for them to truly get over the hump and reach their potential, Ime has to tackle a bigger challenge.

The Celts offense this season has been mid at best. In fact, I'd say it's been mostly terrible. Even during this 8-3 run, their offense is just 17th in the NBA. They are 22nd in 3P% and 18th in TOs. In terms of scoring, they're 20th. They are winning right now because of their defense above all else, and it's fair to say that things might change as they play tougher teams. Yes, not having Jaylen for 8 of those games is pretty important, but you have to remember the Celts only had the 19th ranked offense before Jaylen got hurt.

I keep going back to what we heard Ime say before the season started once he was hired. Remember when he basically told Brad to his face that his offense was pathetic?

It was everything we wanted to hear at the time. Well, nearly 20 games into the season, how's that going? In terms of assists, they've elevated to currently be 18th in the NBA at 22.7. Good right? Going from 25th last year to 18th this year is progress you could say? Not exactly. That 22.7 number is actually lower than the 23.5 they averaged last year. Their AST% this year of 57.0% is 20th in the NBA. Last year they were 27th in AST% at 56.6%. That feels pretty similar to me, the difference being every team in the league seems to be shooting worse this year. Maybe it's the new ball, maybe it's the new rule changes, but from a sheer production standpoint, things haven't really turned around on the offensive end like we've seen on the defensive side. Even during this 8-3 run, they are 23rd in AST% (56.2%) and 24th in AST per game (21.7).

This is a situation where you have to use a combination of the eye test and the raw data. While the averages/percentages leave more to be desired, watching the team actually play does feel a little different especially when you get back to this idea that Ime wants more team basketball.

The Celts are currently 7th in the NBA in total passes. They are 12th in passes per game. Last year those numbers were 16th and 16th. A portion of their offensive struggle is due to the fact that this team has really struggled shooting the ball to kick off the year. Making the right passes is great, but this is a results business. If guys are going to miss their open looks, the assist numbers are going to suffer. On the whole, we are watching a team that seems to be much more willing to pass the ball.

And yet, they haven't found a way to consistently avoid their bad habits. As a team, they still iso way more than most of us would like and the results are gross. They have the 2nd highest isolation rate in the league yet shoot 38% in those sets and rank in the 41st percentile. They are 21st in P&R ball handler offense frequency and 19th in cutting offense despite being in the 86th percentile off cuts. It's why Smart had to say what he did, their late game offense is still way too predictable and it's why they still have one of the worst fourth quarter offenses (29th) and net ratings (30th) in the league.

I would say for the most part, every Celts offensive possession is the same. Someone sets a high screen for the ball handler and that's pretty much it. There's still not enough consistent off ball movement for my liking, most certainly not enough cutting to the rim, and way too much standing around watching. Just look at some of the best offenses in the league right now. The Jazz, Warriors, Heat etc all do a fantastic job with constant movement. When is the last time you watched a game from those teams and said to yourself "man, everyone is just standing around". I'd say you could probably count it on one hand and not even use all your fingers. The part that annoys me is it's not just this over-reliance on everyone watching Tatum iso. We're seeing guys stand around even when they run that high screen to start a possession. With how many good passers this roster has, that's something that should in theory be corrected, but it's an approach thing. This is where Ime can make his impact. He can't force guys to pass, but he can put them in positions to succeed. He can run actual sets that involve movement.

When we saw this Celts team live in the top 3 seeds, they were elite on both ends. They had a legit mix of top 10 or better offense with a top 10 or better defense. Look around the league right now and that's what it takes. Teams like MIA/GS/PHX are the only three that are top 10 in both. Naturally, they are 15-2, 11-6, and 11-6. All three live in the top 3 of their conference. That's the path.

The Celts offense being a work in progress is one of the main reasons I'm not going to declare that they've saved their season after that 2-5 start. I need to see that get a whole lot better for a prolonged stretch before we can truly exhale. The encouraging part is Ime was able to do it on the defensive end, and as long as his best players truly buy in, the offensive improvement should follow.