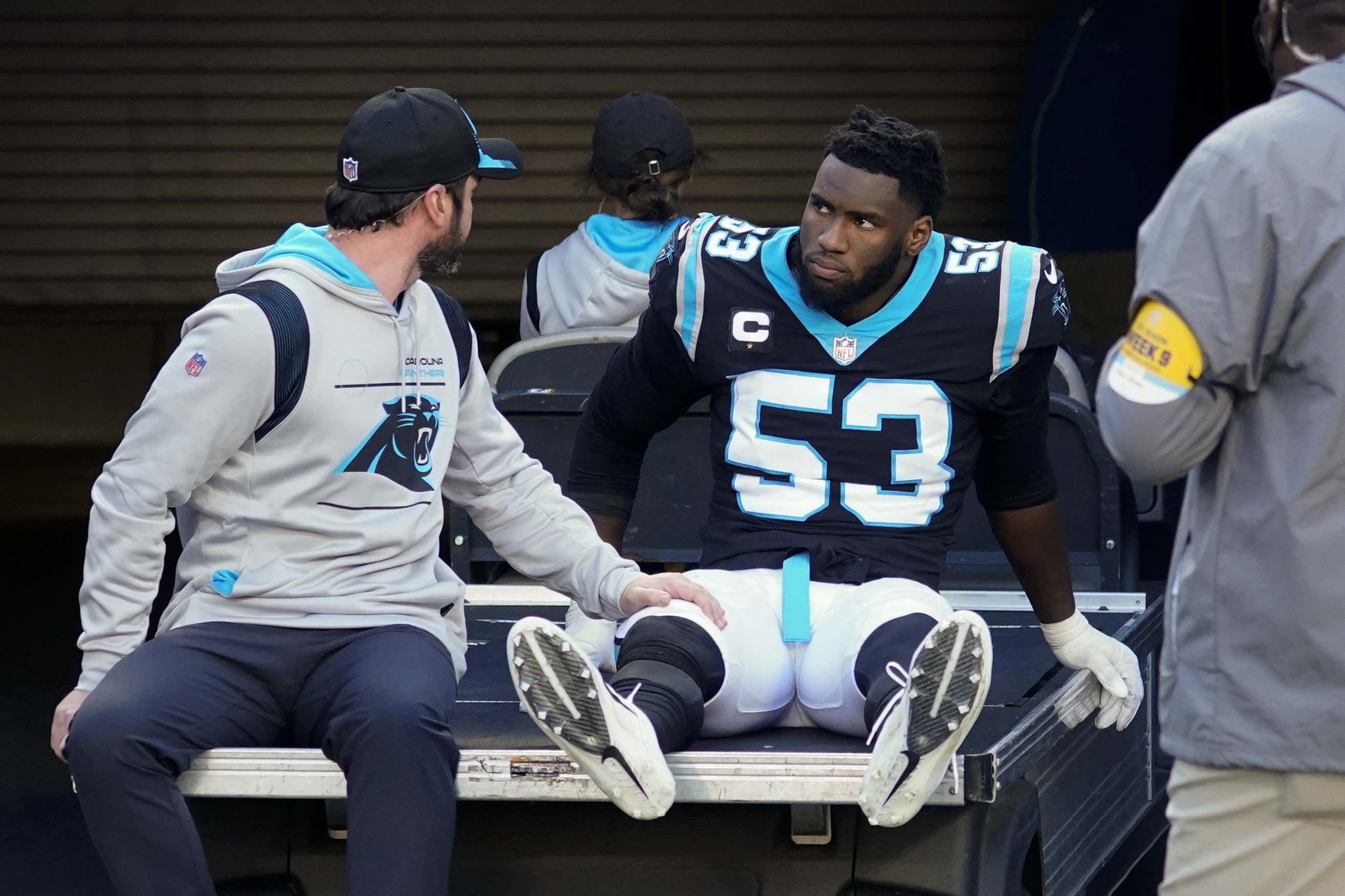 You have to feel bad for Brian Burns, you really do. He posts one of the highlights of his career Sunday, a strip sack of the best young quarterback in football. Unaware that Mac Jones is 210 pounds of menace. A football goon. A full tilt/full time enforcer who doesn't ever stop playing to the whistle and will beat you to the ground if you cross him:

But then again, how could he know? Jones hardly turns the ball over. So his willingness to do whatever it takes to stop a defense from scoring on him probably never showed up on the Panthers coaches' film. But it's a lesson Stephon Gilmore had literally drilled into him a couple of drives later:

Turnovers make Jones' Bruce Banner into the Hulk. That much we've established. So you have to sympathize with Burns, who had to find out the hard way not to underestimate the rookie's strength and power when the huge, green rage monster within has been awakened.

And if you do, then you can also empathize when Burns asks for Jones to say he's sorry:

"It would be nice to have an apology, but it's not going to happen. However the NFL handles it, it's on them. I would just like to play them again. I wish all my fellow D-end brothers happy hunting. That's all."

Ouch. You can see where the lack of remorse from Jones would hurt the most. I mean, that and the fact he got pulled to the ground by a much smaller guy who dropped to the middle of the 1st round in the draft because he's "not athletic enough." That hurts the most. But the lack of remorse hurts the second most. And maybe an admission of wrongdoing from Jones might help bring some closure.

But then again, that "happy hunting" thing is problematic. It's a bit much to expect a sincere outpouring of sympathy when you're basically declaring open season on a guy.

And if Burns had the remotest chance of getting said apology (spoiler: he didn't), that "happy hunting" line would've no doubt killed the deal. Any apology at that point would've come with all the sincerity of Winston Wolf saying "please":

For his part, when Jones was asked about Burns request, he gave it a good leaving alone:

“I already addressed that situation. I'm just looking forward to playing in this game with the guys we have on our team this week. We're already moving forward and getting ready to play this week.”

While reasonable people can differ on whether Jones ankle grab was dirty or him just simply thinking Burns had the ball and trying to make the tackle like he says, no less an authority on playing football with a killer instinct than Rodney Harrison basically told Burns he can take his request for an "I'm sorry" and go piss up a rope with it.

WEEI -  "I wouldn't apologize to that dude," he said. "At the end of the day, the Patriots kicked their butt up and down the field and you have to live with it. It’s something you have to live with. But Mac, he showed me some toughness, too -- the fact that he’s not responding. The fact he’s not walking up there with his tail between his legs, man Mac Jones has some heart. I like it.”

Harrison added: “I think it was one of those plays where he just reacted as a football player. … Trust me, I’ve done worse than that. OK, I’ve done worse than that. I’m not the only one. There’s thousands of football players that have done a lot worse than that. I hate the fact that he did it. You have to be careful grabbing somebody’s ankle and twisting and doing things like that, but he’ll learn from it. I don’t think it was intentional. I think he was just doing whatever he could to restrict that guy from making a play.”

So there you have it. One of the baddest ass players to ever strap up not only doesn't think an apology is in order, he admires Jones' toughness and heart. And admits he and thousands of others have done far worse. Yes, you hate to see a guy get his ankle twisted. That's where the sympathy for Burns comes in. But it wasn't intentional. It was just a guy playing to the whistle. And Jones will learn from it.

The question that remains is when these defensive players are going to learn that Mac Jones is a vicious, bloodthirst beast and is not to be fucked with? "Happy hunting"? Sure. Sounds good. You just better as yourself who's the hunter and who's the hunted.