FINALLY. We've been waiting for Survivor 41 to get going with some gameplay and big moments, and that finally happened last night. We had our first true "moment" with the Xander idol fake-out, a live tribal, and a ton of strategy. It was by far the best episode of the season. The twists and advantages finally came into play and ended up mattering. I'm still against them overall, but at least they finally led to some entertainment last night.

Before we get into the full recap, make sure you subscribe to Snuffing Torches on Apple and Spotify to hear our full episode breakdown.

We start off on Exile Island with Erika making her HUGE decision. Do you want immunity or not want immunity? In a shocking turn of events, she chose immunity.

When she arrived at the challenge, her decision was revealed. It was funny when Jeff said "Erika had the chance to change the course of history." A little strong there. She gave herself immunity, she didn't stop the Kennedy assassination. But alas. Erika, Tiffany, Xander, Liana, Shantel, and Heather were now safe. Ricard, Deshawn, Danny, Sydney, Naseer, and Evvie had to battle for immunity.

I liked Deshawn's response to Jeff when he was asked about this twist and he said, "It's not the game I'm used to. Nothing is the same." You have to think all the players wanted to say, "What is all this bullshit this season? Come on." Danny after the challenge also was saying how being a former pro athlete, he's not used to winning a competition and then having it taken away from him.

But this is Survivor 41 and anything can happen.

As for the challenge itself, it was a dream for anyone with a foot fetish.

It looked like it was coming down to Sydney and Evvie, but Ricard came out of nowhere to win the first individual immunity and join the six others who were safe.

This was a mad dash. It always is before the first merge tribal council, but this one felt even crazier given all the new advantages at play. It's hard to keep track of who is with who. But one alliance that seems the strongest is Liana, Shantel, Danny, and Deshawn. Then Liana's former tribe of Xander, Tiffany, and Evvie thought Liana was with them originally, but lost faith in her after finding out she hid the Knowledge Is Power advantage from them (thanks to Shantel's slip up in front of Tiffany last week).

There's a lot of chaos with a lot of different names being thrown out, but the consensus from the majority alliance of the original blue tribe + Liana, Shantel, and Ricard seemed to be voting Evvie. Xander tries to cause some chaos by telling Danny that he's going to give his idol to protect Evvie. At first, I thought this was stupid and he had loose lips, but spoiler alert it seems like it was all part of a carefully concocted plan to fake everyone out.

Xander, Tiffany, and Evvie seemingly pull in Sydney and want to target Deshawn (remember the only people eligible to get votes are him, Danny, Naseer, Sydney, and Evvie). They pretty much know they can't trust Liana but tell her that Xander is holding onto the idol himself and will get up to play it on Evvie. Liana, meanwhile, is planning to use her advantage at tribal to take the idol from Xander before he can give it to Evvie and then vote her out with the rest of new, majority alliance.

When tribal started at 8:35, you know some shit was about to go down. And shit did indeed go down. First up, we had Deshawn throwing some more shade at Jeff saying how he wishes his social game mattered more but it doesn't in a season like this. Keep taking those shots! But then we had our big moment.

Jeff asked Evvie if she was in trouble and she said that her "jungle bro" will protect her. Xander then pulled out his "idol" and said "It's no secret I have it" and that he was playing it on Evvie to protect her. Deshawn tries to stop it by saying Evvie told him about Xander's idol when they were on the Advantage Island together and he shouldn't actually trust her, but it was too little too late. The whole thing seemed TOO obvious where you knew something had to be up. They couldn't be that stupid. And they weren't. When Liana asks Xander for his idol, he reveals that it's merely a fake.

After a flashback edit, we see that Xander had actually given his idol and extra vote to Tiffany before tribal. This was the smart move (predicted by me on Twitter nbd). It was clear that their attention was on Xander and Evvie. And they KNEW Liana had that advantage. And they KNEW they couldn't actually trust her. So you knew they had to have something up their sleeve. I actually thought they almost made it too obvious. Sort of a bad look for Liana that she couldn't sniff something out. She was also proven to be untrustworthy and a liar to Evvie. And lost her advantage without getting the idol. A huge L for her overall.

It then becomes a LIVE TRIBAL. Everyone stood up, scrambled, whispered and made new plans. I wish there was a rule where everyone had to stay seated and couldn't whisper. I think that would make things a lot more interesting and chaotic in a situation like last night. For awhile, it was very unclear who the votes were going on. But then the sides formed clearly.

Sydney, Evvie, Xander, and Tiffany were on the outs. With that 8-4 majority, they could just split the vote on Sydney and Evvie, which is exactly what they did. Deshawn even used his extra vote just in case to put on Sydney. I like that move from him. He knew his name was getting written down and with how chaotic votes split can be, he needed to pull out all the stops to ensure his safety.

Sydney uses her Shot In The Dark, but it was not successful so she lost her vote and got sent home with a 5-4-3 vote. The 5 Sydney and 4 Evvie votes came from the majority 8 plus Deshawn's extra vote. Evvie, Xander, and Tiffany voted Deshawn. At first, Sydney was upset she lost her vote but it wouldn't have mattered unless she used it on Evvie and forced a tie, but she was never going to do that. She really was just a victim of bad luck.

She also did not make the jury. She could've been a great jury and final speech villain.

-For sure the best episode of the season so far. I still don't know if the rest of the season can be saved because there seems to be a clear 8 vs. 3. I want more chaos. But this episode gave us everything we could've asked for and more.

-We wondered why Sydney hated Heather so much. Well here is some context.

-Also a very interesting quote from TVLine that apparently Danny really got into it with Jeff at tribal over the stupid twist. 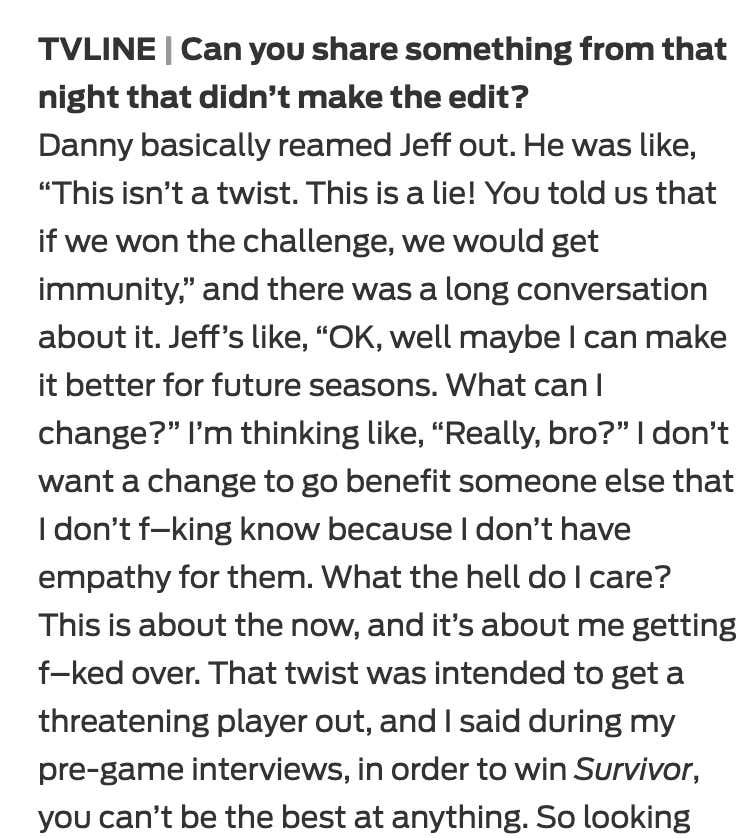 -Liana did have a good winner's quote last night with "I came out here to make my own decisions and hopefully win this game.” Something I could see in a winner's montage. But overall, I thought last night was a really tough look for her and she is moving down my winner rankings. She can definitely recover though.