In honor of Vikings Cowboys today, there's been a lot of classic matchup highlights from when these teams battled in the 2000's.

Of those, the ones that have been the most eye catching are the ones of Randy Eugene Moss.

Namely because Dallas so famously passed on drafting him.

The Cowboys entered the 1998 NFL draft with a clear need at wide receiver. Armed with the eighth overall pick, Dallas seemed destined to replace one Hall of Famer with a supremely talented and younger version. But Dallas, and its owner Jerry Jones, are high character. As everybody knows they value personal character and integrity over winning. With rumors and a few disciplinary actions pointing the Randy liking to smoke marijuana, they decided he was not Dallas Cowboy material...

(Sidebar - was TV picture quality seriously that bad 20 years ago? I know it wasn't 8k UHD like we have today, but sheesh.)

I think people forget, watching him sitting behind the desk talking into the camera on ESPN, looking even more trim than he was when on the field, that Randy Moss was the most talented wide receiver ever to play the game.

Argue that take all you want. I didn't say greatest ever, I said most talented.

Take this 1998 Thanksgiving Day game that is trending for example.

The man scored every time he caught the ball.

Look at his career stats

Now take into account this man played in a time right before defenders were no longer allowed to play defense. They could still get physical, and take your head off. He also played with a decent to good Daunte Culpepper, before going to some terrible Oakland teams and wasting the prime of his career. Then Bill Belichick rescued him, and we saw the kind of stat line he (and Tom Brady) were capable of if they had had somebody on their own level to have throwing them the ball. 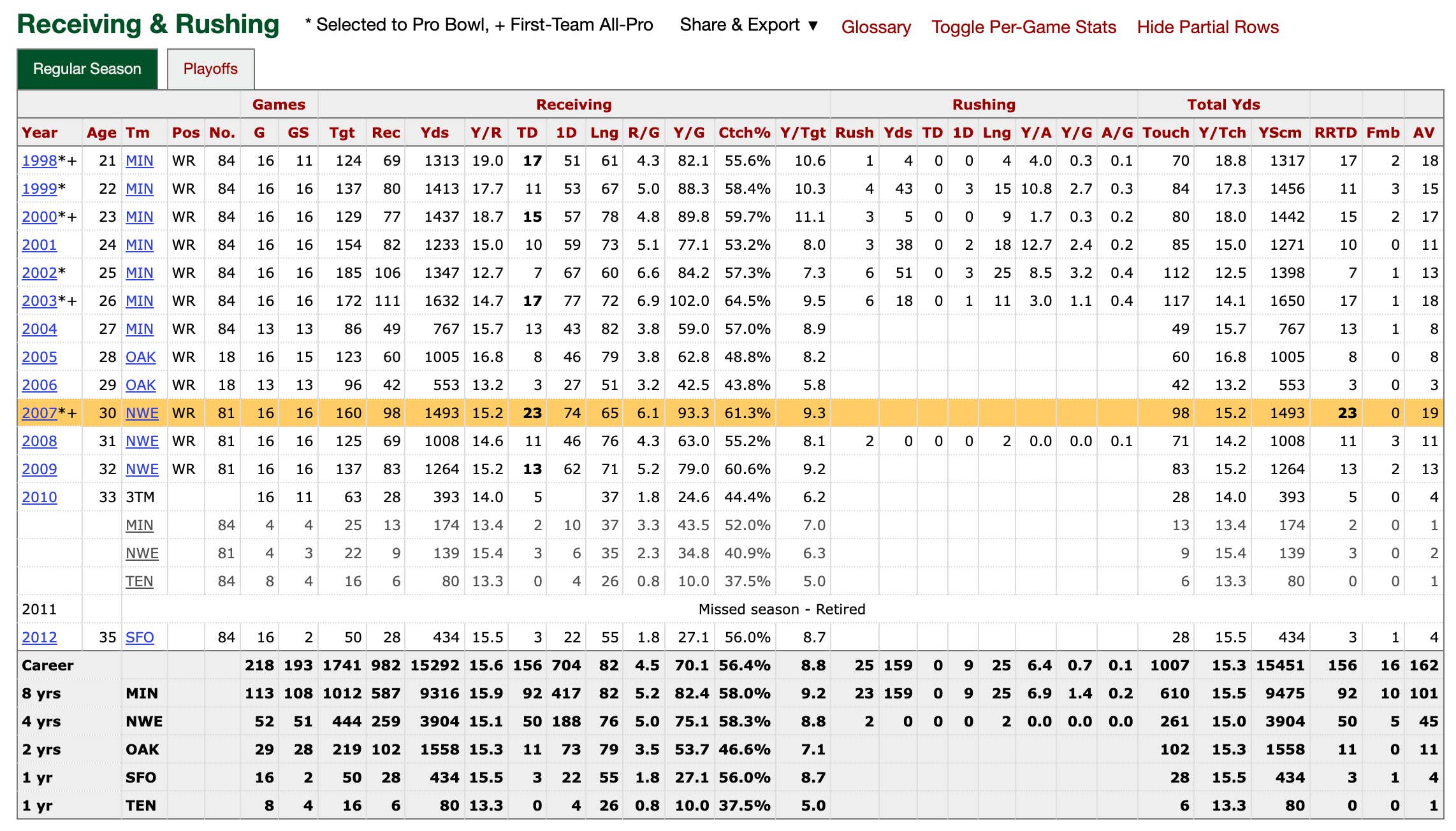 He did this all with a shitty agent, and little to no attention paid to his mental health.

In New England, Moss set a single-season record in 2007 for touchdown receptions with 23. The Patriots went 16-0 during the regular-season before suffering a heartbreaking loss to the New York Giants in the Super Bowl. His next two seasons in New England, Moss had strong numbers, with more than 2,200 yards to go with 24 touchdowns. However, the Patriots did not win the Super Bowl and Moss began to sulk that his contract was expiring and he did not feel wanted. After an alleged blow-up with several teammates and coaches during and after a win against Miami, the Patriots traded Moss back to the team that drafted him - the Minnesota Vikings.

The Vikings, already in the midst of another season of the Brett Favre soap opera, thought this might have been the spark they needed. Instead, things went from bad to worse, culminating in a bizarre press conference after a Vikings loss to the Patriots where Moss praised everything about the New England organization, from the owners to the coaches to the players. He called Bill Belichick the best coach in the world, and hurled a not-so-subtle jab at his own coach, Brad Childress.

He was a must-watch on and off the field, and a must listen to sound byte always.

And he was a grade a shit talker and jokester on the field.

p.s. - it's Halloween. You KNOW I wouldn't not tie in this classic.