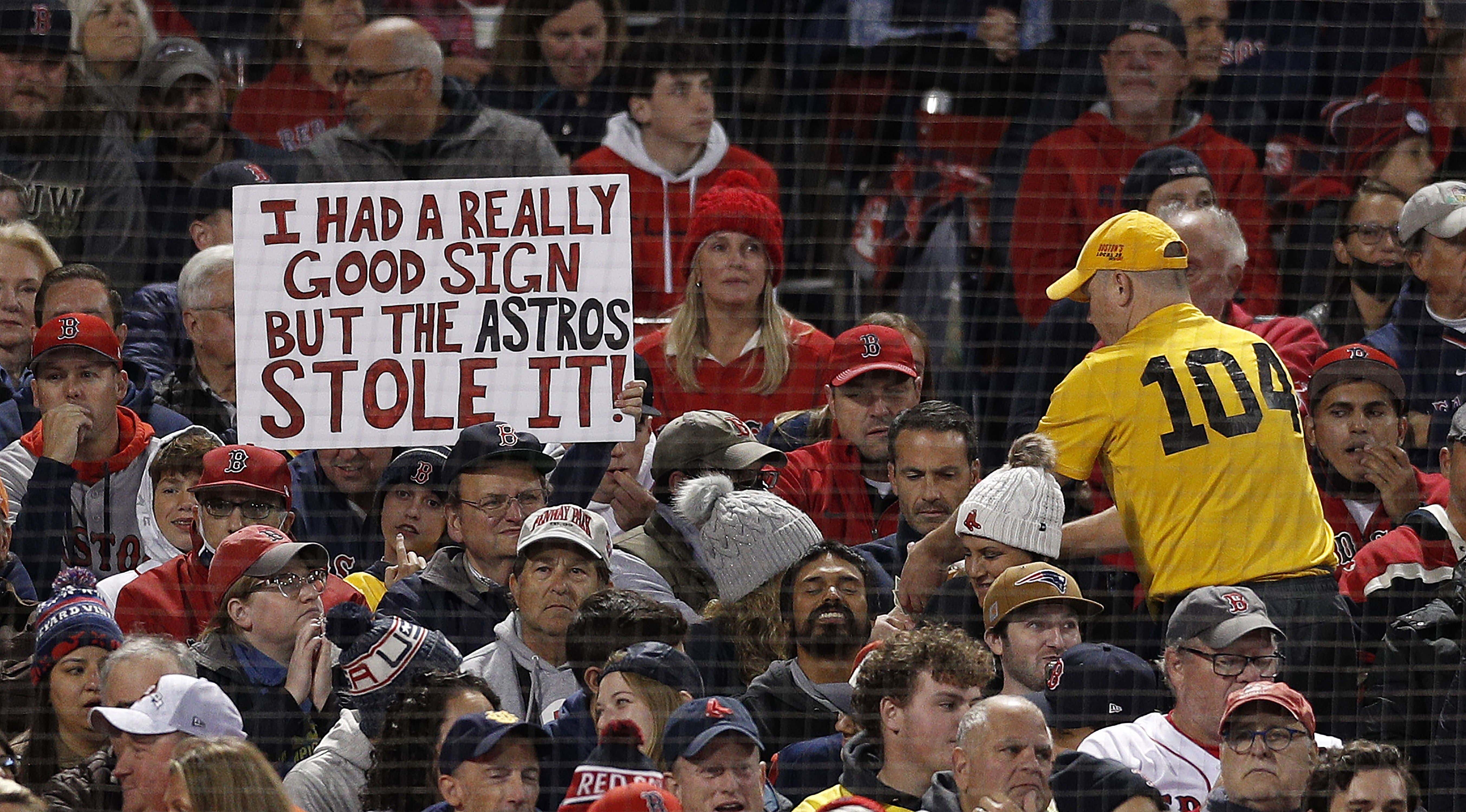 To be fair, just because the Astros went from being down two games to one in the ALCS to winning two games at Fenway by a combined score of 18-3, does not mean they're back to their old cheating ways. Yes, they won a World Series by cheating. But that was 2017. Ancient history. I mean, how many people in Houston's organization then are still there now? Or even still alive, for that matter. To just assume they're cheating again would mean you're guilty of what in Debate is referred to as "the questionable-cause logical fallacy." In Latin, cum hoc ergo propter hoc ("with this, therefore because of this").

But while it's wrong to simply assume it, that doesn't mean you're wrong if you can prove it. This morning on The Sports Hub's "Toucher and Rich" show, recent "Do Your Pod" guest Rich Shertenlieb was taking calls and Tweets from people who detected a pattern of whistles that seemed to be tipping Red Sox pitches, which has been the Astros' modus operandi in the past.

This video explains the The Whistle Code and how it was used to tip pitches:

And the Yankees has suspicions of their own after the 2019 ALCS:

SNY -  After the Yankees asked Major League Baseball to investigate the Houston Astros for whistling to convey signs in this year's American League Championship Series, the league announced that it found no evidence of wrongdoing, and left it at that.

As it turns out, the reality of the situation was a bit more complex. …

The Yankees' suspicion arose during Game 1, as SNY first reported. Third base coach Phil Nevin and others on the Yankee bench accused Astros hitting coach Alex Cintron of whistling to give batters pitch selection.

Which brings us to this series. Listen for the whistle just before Jose' Altuve takes Garrett Whitlock's 8th inning fastball deep:

And again in last night's Game 5, as  Yordan Alvarez tees off on a Chris Sale in the 2nd:

And some sleuths have detected what they think is Alvarez gesturing to the Houston dugout that he appreciates the intel:

As well as a double whistle, just before a breaking pitch gets taken the opposite way for runs:

And here's where the rabbit hole goes deeper. Dusty Baker was blatantly sporting a Fitbit, which is one of the wrist-worn smart devices that is explicitly banned by MLB.

Is all of this proof that the Houston Astros are once again blatantly defying baseball's sacrosanct rules against using nefarious means to steal signs? That they found themselves getting dangerously close to elimination so they went to their default setting of cheating in order to stay alive, despite all the breaks they've been given by MLB after past transgressions?

Who am I to say I come from New England. Our teams don't cheat. So I'm not familiar with how these things are done.

All we can say for sure is there's a pattern here. Or at the very least, it's a hell of a coincidence that Houston's biggest hits have been preceded by the very pattern of sounds that preceded their biggest hit in past Octobers. And while their manager is wearing a device he's not allowed to wear.

The bottom line is that I don't know if the Astros are guilty or not. Just that I am getting on my knees right now and praying to my Heavenly Father that it's true. That this time MLB finally decides they've crossed a line, looks into it for real instead of just covering it up, and that we see them get the true public humiliation they've avoided for the last four years. Please, please, please, make this so.