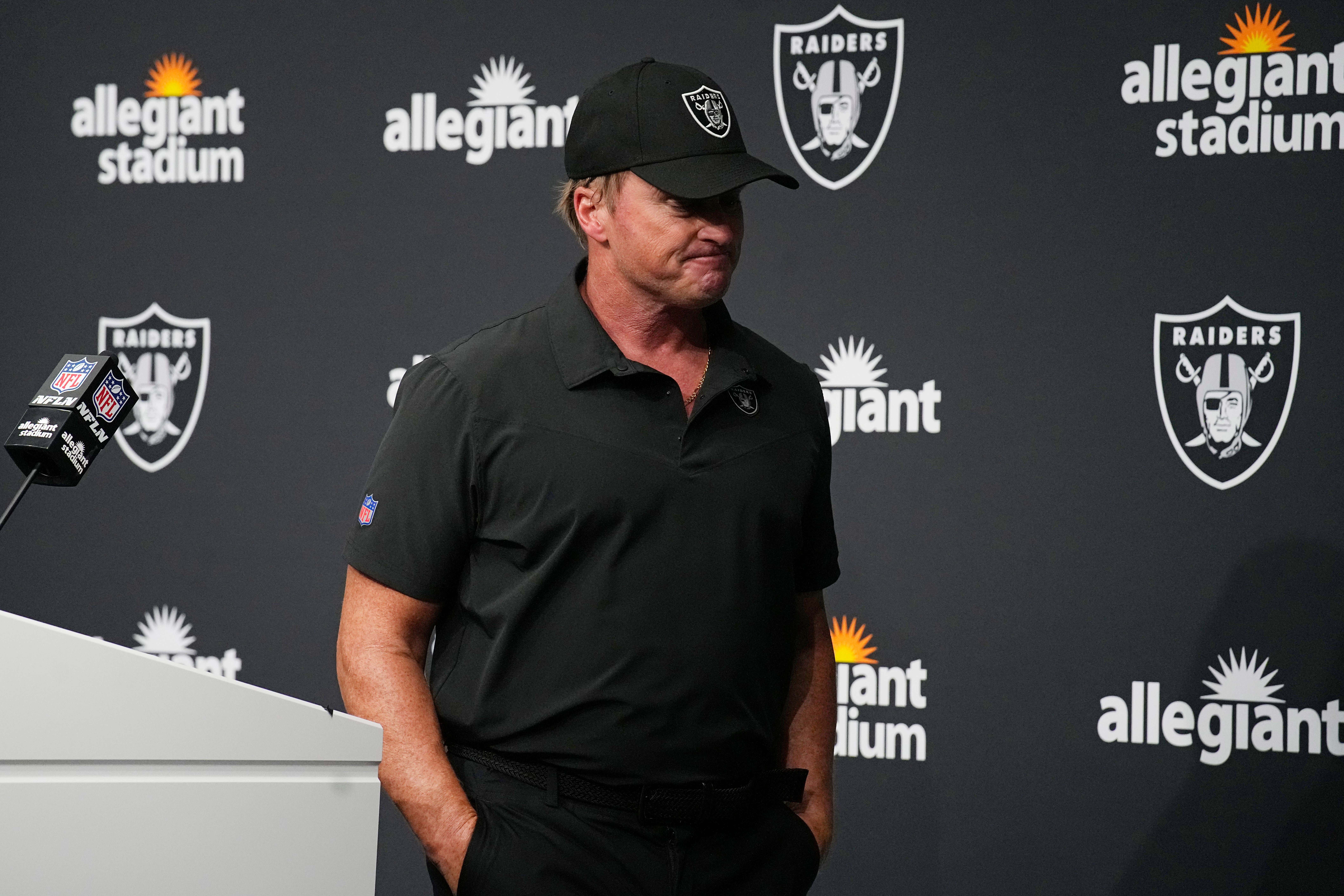 Not 24 hours ago we were sitting here, sifting through the wreckage of Jon Gruden's decades long, high profile pro football career and wondering what the cause of the crash was:

And, as expected, we're learning more and more. Not so much about the hows and whys of Gruden emptying a can of gas over his professional head, but about who struck the match. As is so often the case, after the initial shock of a scandal wears off, the real buzz ends up being generated by a deeper dive into the investigation.

By way of example, consider the Ray Rice elevator assault on his fiancé. There wasn't a reasonable person in the country who saw the security camera footage of Rice dragging his unconscious future wife out of those doors like a load of laundry and bought the NFL's official narrative about there being wrong done on both sides causing a freakish accident and whatareyagonnado, he's a great guy let's all get back to football. Only after the footage from inside the elevator showing him smashing her head off the hand rail was leaked did we get the full picture. How Rice was the spokesman for M&T Bank who had sunk umpteen million dollars into the naming rights of the Ravens stadium, Roger Goodell was a regular guest of owner Steve Biscotti at Augusta National, and the victim admitted she was told to apologize for her "part" in the incident. Then we all understood the whole thing was the league's attempt to spike a story because it would do damage to Biscotti - who is a Made Man in the Goodell Crime Family - and one of his team's major business partners.

That is how the NFL operates when things surface that are a bad look for the league. They either spin it, bury it, or distract from it. Like a hack magician on a cruise ship, throwing a flash-bang to get you to look away from his breast-enhanced assistant coming out of the hidden door in the back of the cabinet. In the case of the Gruden emails, if you thought the goons from Der Kommisar's Ministry of Truth were at all interested in uncovering insidious racism and pernicious homophobia among their coaching ranks, you truly haven't been paying attention to how they operate. Based on what this Wall Street Journal report says, it goes way beyond that.

Source (paywall) - [T]he problem for Gruden wasn’t just the offensive language he used. It was where he sent the emails: to the work address of a former Washington Football Team executive, Bruce Allen. …

In June, at the end of the investigation by an attorney retained by the NFL, the league learned of a bombshell stash of emails from Allen’s inbox, according to people familiar with the matter. Shortly thereafter, the NFL received more than 650,000 of them. The offensive emails between Gruden and Allen—who previously worked together at the Tampa Bay Buccaneers—were part of the trove, these people said.

League officials found the emails troubling, but it was determined that they were outside the scope of the original probe of the Washington Football Team. …

By last week, however, the league had not yet acted on what it found in the emails. NFL commissioner Roger Goodell was briefed on the email investigation findings last week. The league planned to present its findings to the Raiders at an in person meeting that had not yet been scheduled, people familiar with the matter said.

Those plans were disrupted when The Wall Street Journal reported last Friday that Gruden had sent Allen an email in which he used a racial trope to mock NFL Players’ Association executive director DeMaurice Smith. …

The NFL said last Friday that the email about Smith, and others pertaining to Gruden, would be shared with the Raiders. Still, Gruden coached his team’s game two days after that first email’s revelation. The NFL hadn’t yet disciplined him. Neither had the team.

Then the contents of a new batch of emails emerged Monday night. Those contained pictures of topless women, a reference to commissioner Roger Goodell as a “faggot” and a note that Goodell should not have pressured then-St. Louis Rams coach Jeff Fisher to draft “queers,” an allusion to the team’s 2014 draft choice of Michael Sam. In these additional emails, Gruden also sent an email to Allen that included an antigay remark about Bryan Glazer, co-owner of the Tampa Bay Buccaneers.

So to review: The league is so appalled by the series of allegations directed at the dysfunctional goatfuck that is Dan Snyder's team, that Nate has done incredible work chronicling, that it launches an investigation. One that, last June, reveals a former Monday Night Football analyst saying all sorts of egregious things. Since that ex-ESPN employee now coaches the Raiders, they plan to take it up with the Raiders. But don't. Somehow, they never get around to it. (Maybe because so many of the investigators were taking summer vacations, they couldn't get it together. But I'm speculating.) Instead, they sit on it for months and then in October, leak some of the information. Then let him coach a game. Then talk to the Commissioner who, for some strange reason, has been kept in the dark about it until now. Then more damaging Gruden quotes get leaked. And before any more comes out, he quits in disgrace.

Does that more or less paint the picture? And does it add up in any way whatsoever?

I mean, Gruden didn't shout this stuff out his window. He didn't write this stuff down, roll the note into a bottle and toss it into the tide. He exchanged these thoughts with Bruce Allen, who was part of the cabal running the Washington R-words. Ostensibly with Allen's endorsement, since he sent Gruden tittay pics of Snyder's cheerleaders in return.

But do we get to see Allen's responses? Nope. They're not relevant. Though we can be sure if an NFL team executive came back at Gruden with, "What?! How dare you?!? I find your characterizations deeply offensive and against our policy of inclusion and tolerance and I object to them in the strongest possible terms. For shame! Good day to you, sir!" those would be all over the internet by now.

Instead, nothing. Not a word. And no one from the Football Team is being made to answer for it, least of all Snyder. Not even a statement from WFT's lawyers, never mind anyone being asked to explain themselves. And Gruden is the only one in all of this who's lost his job. A fact that is not lost on a large group of former WFT employees, who are demanding someone besides the Raiders' ex-coach be held accountable.

Yeah, good luck with that. Ginger Satan will be asked about this by some friendly access journalist months from now and answer with some word soup filled with references to "transparency" and "getting to the truth" and that will be the last you'll ever hear about it. But transparency and truth are the last things anyone wants when it involves Snyder, who's on the business end of the puppet strings here.

And as far as Gruden, what he said is indefensible. But he'd still have a job if only he'd taken Goodell golfing at Augusta.