Boy howdy, do things ever change quick sometimes. I mean, here I was just a few hours ago bemoaning the fact the Patriots went and gave an outright release to not only the most successful free agent signing in franchise history, but arguably the most talented man on their roster. One who happens to play the most high leverage position on any defense. Why, I was complaining, couldn't they get anything in return for the 2019 DPOTY?

Oh, ye of little faith. I should've known better. I should've seen right through the ruse and understood Gilmore's release was just all part of GM Bill's master plan. And that once it was announced, other GM's would come running to his door offering a king's ransom of treasure to pry this lockdown corner away.

So Carolina it is. The Panthers get a major upgrade to the second ranked defense in the NFL.. Gilmore gets to go home:

And the Patriots get ... a 6th rounder. In two years. Just what we were all hoping for. So it looks like everybody wins, right? Somebody please tell me that's right because this feels only marginally better than the nothingburger they seemed to be getting this morning. This is still a nothinburger, but with cheese. Government surplus cheese at that.

Look, I can question the move and how this situation has been managed since the end of 2019. But I'm going to stop short of believing that all of a sudden GM has forgotten all about how to generally manage. That he woke up this morning in a panic realizing he'd forgotten all about Gilmore and ran around in circles waving jazz hands going, "Ohmagawd Ohmagawd Ohmagawd! What am I gonna do???" while Nike the dog barked excitedly.

After all this time, the front office and the way they manage personnel has earned a level of trust higher than, "They don't know what they're doing and Tom Brady made up for all their incompetency for 20 years." Which has the default setting of a lot of people during this Dynasty.

So trying to go through the flight data in the black box that is this particular plane crash to figure out how it happened, the best I can figure is that all this was an old fashioned Patriots-style disagreement on what a player is worth.

Coming off his DPOTY season, when he led the NFL's best defense, Gilmore tried to parlay that into an extension and a major pay increase. The team kicked him $7 million extra, paid for by Future Gilmore. Meaning they took it from his 2020 salary and tried to work out a better deal under more favorable circumstances than when the player has all the leverage. Then what leverage Gilmore had was lost with an undeniable drop off from one year to the Covid- and injury-plagued next.

Take all that and do with it as you will. Personally, I've been ready to give Gilmore the Covid Year mulligan and move on. Or at the very least get him in the lineup, let him be an asset to a unit that has seen a massive amount of turnover since that Super Bowl he helped us win, and then let 2021 take care of itself.

But then, I'm not the one having to make a major long term commitment to a player who may or may not be on the decline at the age of 31. There are people in the organization whose occupation depends on determining if that's a "may" or a "may not." And the logical conclusion is that they decided it's enough of a "may" that Gilmore is worth something, just not what he's demanding. So after almost two years of trying to work out a compromise, they realized the two sides are too far off to keep this going on any longer and got what they could.

Which is not to say they got a decent return. They didn't. They'd have been better off trading him for one of those gift baskets you find at the youth hockey raffle with all the scratchies in it, in hopes they'd hit a big one. So it feels like once again, they decided to do a solid for a guy who's been a good soldier here, like when they sent Jimmy Garoppolo to play for Kyle Shanahan. But at least in that deal, they got back Brian Hoyer. This is just a giveaway. And a favor to Gilmore. It's a Gilmoreway. (Feel free to high-5 your screen for that clever wordplay.)

At the very least, by sending Gilmore to the NFC South instead of letting him pick his own destination, they kept him off a conference rival. And made it so he'll have the chance to bother the guy I assumed he'd be rejoining. 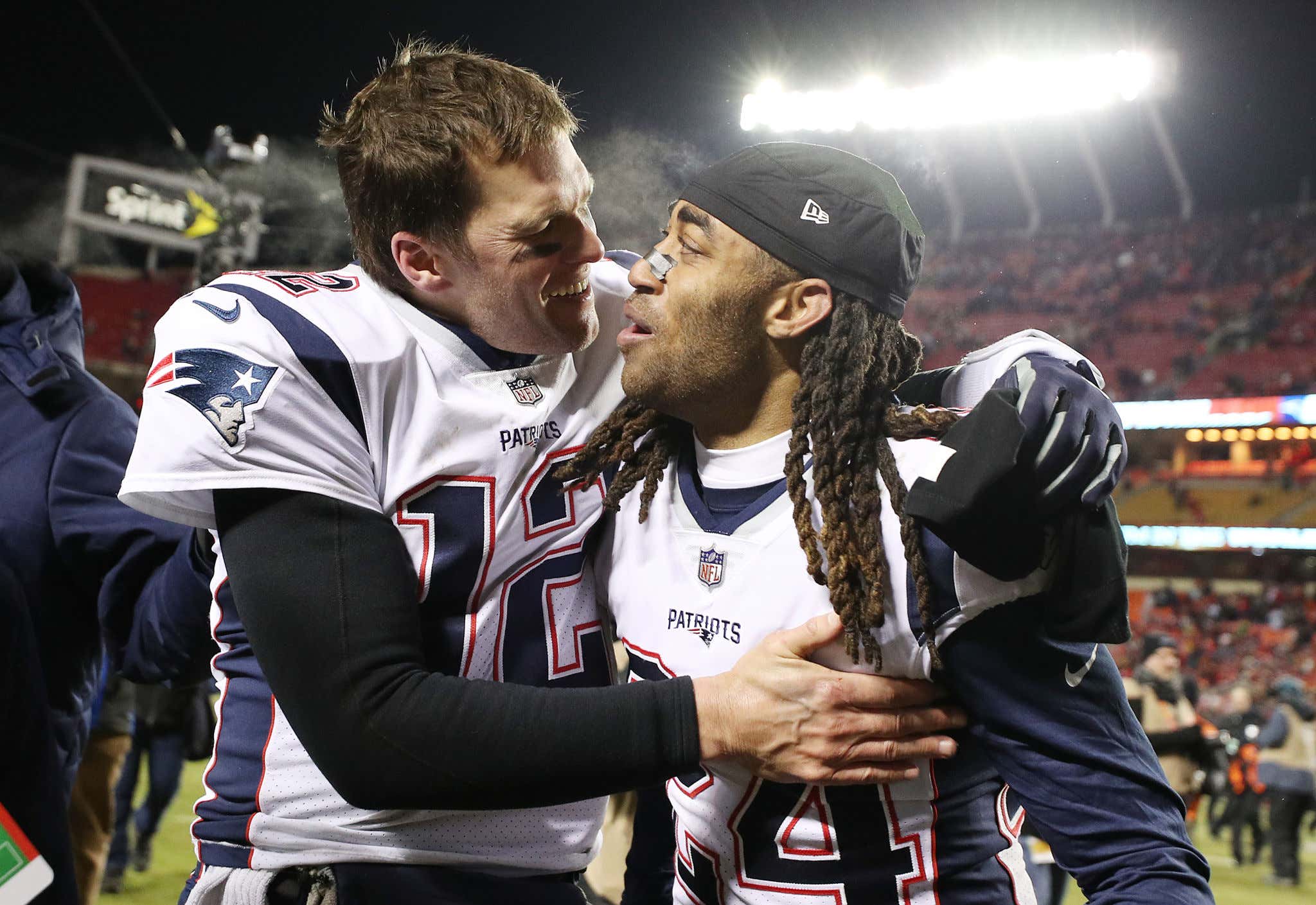 The Patriots face Carolina on November 7th, but there's no telling if Gilmore will be off PUP by then. Tom Brady gets him twice in a three week span after Christmas. Good luck with that.