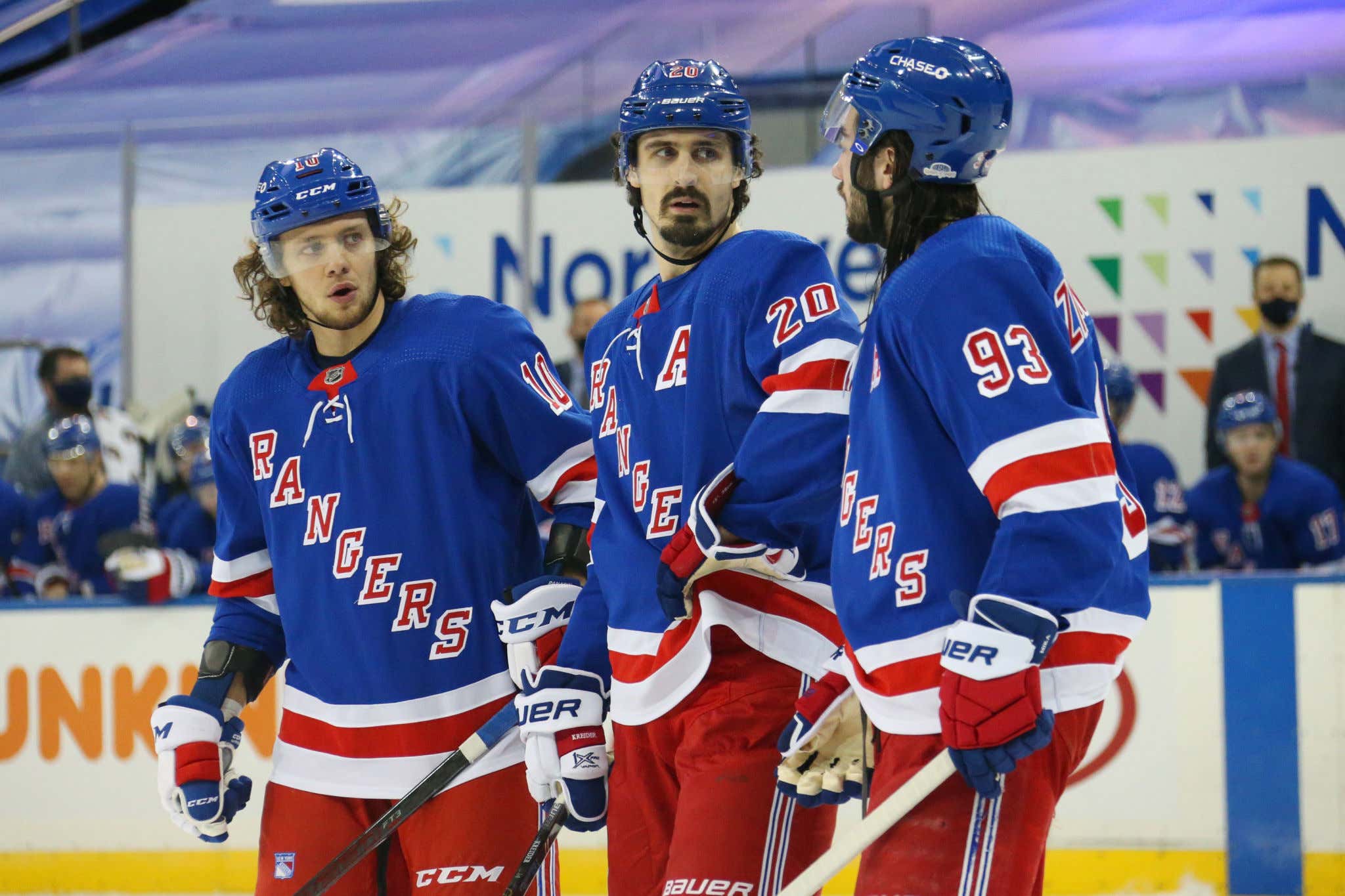 Last week I covered the Rangers' defense and goaltending heading into the 2021-22 NHL season and, while there are a couple new names in the mix to round out the back end, there doesn't seem to be any significant question marks as to who will be paired with who & where. What Gerard Gallant plans to do with his forward group & expectations they have is a much bigger mystery. A reliable core is surrounded by newly-acquired sandpaper and elite prospect talent we're patiently waiting on to reach their potential. The sky's the limit, but the floor? Who knows…

YOU KNOW WHAT YOU'RE GONNA GET

Artemi Panarin is one of the league's true elite offensive weapons. Although he missed 14 games last season, in large part due to despicable evil (hard to say who's worse, Putin or Wilson), he racked up points at the same exact per-game pace as his Hart finalist Rangers debut. With Breadman in the lineup his squad was 22-14-6 while a hapless 5-9 without. Just like any other superstar, his presence in the lineup is integral to the Blueshirts' success because he's flat-out unstoppable on the ice. Over an 82-game schedule, triple-digit points is a stone cold lock.

Mika Zibanejad scared the shit out of all of us for the first six weeks of last year with a paltry 2G/4A start through his first 19 games and it was no coincidence the Rangers followed suit (7-9-3). While everyone knew Covid caught him just before training camp it seemed like an excessively long time for that to be the sole reason. Fans were wondering if Zib was cooked. Nah. DJ ZBad bounced back in a big way over the final 37 tilts. His 44 points over that span were 6th-most leaguewide while his 22 goals were only bested by Matthews' 23 as the Blueshirts finished 20-14-3 - a full-season pace that could've kept them in striking distance for that last playoff spot instead of fighting such an uphill battle all year. With a huge UFA payday on the horizon combined with the spark of a new regime & new expectations, Zibanejad should flirt with triple-digits too.

Not sure too many expected Ryan Strome to still be here with all the hype around names like Eichel and other long-term C upgrades - but he's back, in a contract year, after doubling down on his 19-20 offensive resurrection. Strome finished a tick behind elite company in overall points-per-60 (2.87 compared to 2.93 for Bergeron, 2.94 for Tavares & Stamkos) and was runner-up only to Panarin on the Rangers. While his future is a huge question mark, he's proven to be a reliable source of secondary scoring even without the Breadman on his flank.

Ah, Chris Kreider. The once bright, young future of the organization enters his 30 year-old season as an elder statesman ushering in a new crop of promise. Although the speedster regularly leaves fans wanting more, he always gets his respectable goal totals despite always having gaps of invisibility. This past season was no different as Kreids buried 9 of his 20 goals in a 6-game span while tallying just one over a crucial 12-game stretch towards the end of the year. He had his worst 5x5 showing of his career due to an uncharacteristically low shot rate, but his skillset is right up Gallant's alley. Maybe this is the coach to finally get Kreider to be the consistent, physically dominant power forward he's shown glimpses of over a full slate. Hell I wouldn't be surprised if he's named the next captain. Still, even if it's the "same old Chris" we all know exactly what that is.

Two-time Cup champ Barclay Goodrow comes to New York with a lot of pressure after inking a 6-year/$3.6M per deal to recreate the relentless & talented third line that was the difference between prior Bolts squads falling short & TB now celebrating back-to-back banners. He won't have the tenacity of Gourde and the physicality of Coleman, but he'll certainly have high-caliber skating & skill in Chytil and (most likely) Kravtsov - can Goodrow's motor rub off? Will his heavy game open up more opportunity for his linemates to capitalize on their talent? Only time will tell. He'll certainly provide insurance at the pivot if Chytil doesn't start holding his own at the dot and will also be a PK staple, absorbing Buchnevich's team-leading shorthanded minutes.

Sammy Blais, Ryan Reaves, Dryden Hunt & Morgan Barron are all in the fourth line mix around Kevin Rooney for one reason - to bang. Whoever is in the lineup on any particular night will be tasked with mimicking the Islanders "Identity Line" as best they can. While that doesn't mean they've gotta become the best fourth line in hockey it does mean they'll need to be an option Gallant can deploy willingly, not begrudgingly, to dictate a heavy & uncomfortable style of play on their opponents. These 10 minutes a night are critical in helping the Rangers shed their "pushover" reputation.

Alexis Lafreniere had a "meh" rookie season for a first overall pick but showed unquestioned signs of growth and confidence down the stretch. After a lone goal to his credit after 15 games, Lafreniere accumulated 20 points over the final 41. All his points were at even strength and his 5x5 production over that 41-game stretch was a tick behind Panarin, Zib & Buchnevich. With Buch gone, a top-six spot is a lock for Laf whether it be on the left or right side. More quality minutes and expected PP2 contributions have his sophomore projections pushing 50 points with the potential for a true breakout.

Perhaps the most intriguing Rangers player this season is Kaapo Kakko. After a dismal rookie campaign, Kakko somehow manifested himself into one of the better defensive wingers across the league - but the scoring was still lacking, on pace for a 29-point 82-game season. Not exactly what you're looking for out of a kid selected 2nd overall. With Buchnevich gone though, he'll have every opportunity to put together an all-around season as a top-six staple. If the offense still isn't coming though and the Rangers struggle early, don't be surprised to see Kakko relegated to checking line duties & Kravtsov (or even Chytil) get their shot on a top-six wing.

22 year-old Filip Chytil is coming off a very underrated season - one that could've been even better had a hand injury not shelved him for over a month just five games in. 22 points in 42 games for a bottom-six center playing barely 13 minutes a night with essentially zero powerplay time is exceptional. Plus, when together with Kakko, they gave the Rangers a third line that could more than hold their own in both ends as evidenced by their 11-4 5x5 goals advantage & solid possession numbers. It wouldn't be the worst idea to keep those two together along with newcomer Barclay Goodrow, but I'll get into my (unlikely) line combos later.

Vitali Kravtsov is finally here. Plenty of fans had written off the 2018 #9 pick, but while superstar hopes may not be realistic anymore, Kravtsov certainly got fans attention in his better-late-than-never NHL debut towards the end of last season. It's hard to believe he's just a couple months younger than Chytil who's going into his fourth full year, but at least from a physical standpoint he's mature enough to contribute as a middle-sixer. Where his game and effort level is over the course of a full season is a true wildcard though and it's fair to wonder if a checking line spot, which is where he's projected as camp opens, is one he'll thrive in.

Lines are fluid for a lot of teams, but with so many new young pieces under a new coaching staff there are endless combinations that can start off the year. Here's a bit of an outside-the-box lineup I'd love to see take shape:

I simply have to see #10 & #93 together. Have to. I don't like the idea of putting a kid like Kravtsov in a potential checking line role although he'll obviously need to contribute at all areas of the ice. Instead, put him in a spot where it's seemingly impossible to fail & see how much of his offensive potential can be brought out playing alongside a pair of stars.

This is the ultimate "prove it" line. Kreider is looking to bounce back from a season I'm sure he views as a disappointment. Strome is playing for a payday & potentially making NY home. Lafreniere is on a mission to prove why he was the unquestioned #1 pick. Kreider plays a straight-line game, Strome is the facilitator, Lafreniere the combo. This can work.

This is where I'll meet the most resistance. My lack of trust in Chytil as a long-term center is nothing new, and now the Rangers have a legitimate replacement in Goodrow. Pinning Kakko on the third line may seem like I'm giving up on him, but that's not the case at all. He and Chytil played well together last season, especially defensively. Keep that chemistry brewing. The trio has the potential to chip in offensively while keeping the opposition off the scoreboard.

I like Sammy Blais. I don't have to like the Buchnevich trade, but I do like the player. High-energy, physical, in your face style the Rangers were looking for to help give their fourth line an identity other than "go out there and try not fuck up while our guys get a breather". Morgan Barron is a big, strong kid looking to be a similar type of player to get his foot in the door before finding a way to climb a little higher in the future. Rooney is an ideal, responsible 4th center. Ryan Reaves, Dryden Hunt and maybe even Julien Gauthier will make appearances as well but this is the trio I'd want to see most nights.

Regardless of who slots where, this is a critical season for virtually everyone. Whether they're playing for a payday, a roster spot, significant ice time or to prove themselves to a new fanbase almost all the names listed have a dangling carrot in front of them. Who steps up to grab theirs despite obvious organizational pressure for success under a new leadership regime remains to be seen - but there's no doubt the pieces are in place for the Rangers to crash the postseason party.