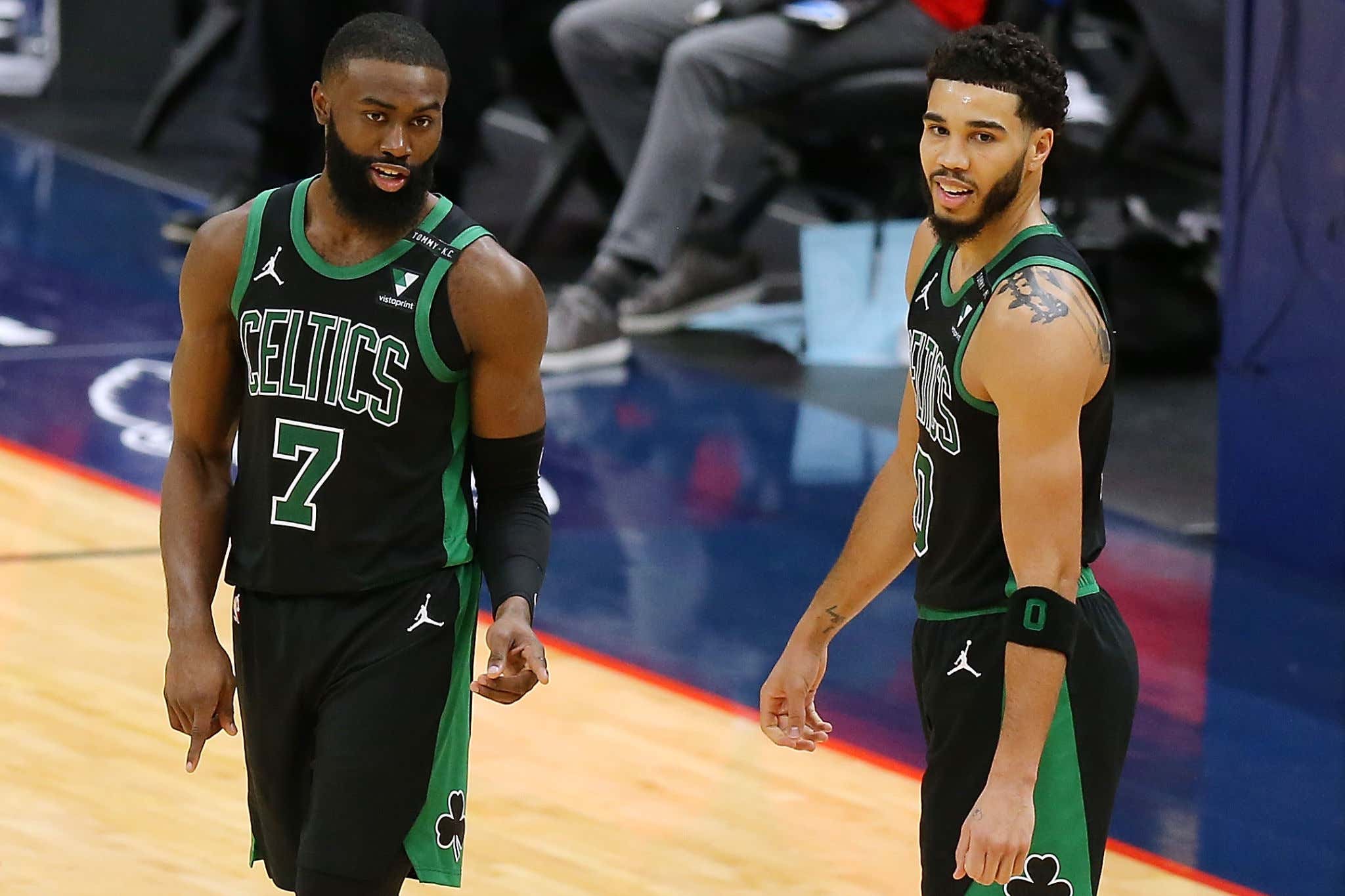 Maximizing Jayson Tatum and Jaylen Brown. That's been the goal and focus of this entire offseason since Brad took over. Every decision they make, every signing/trade/extension they pull off, all have one goal in mind. Maximize the Jays. While on paper the Celts have raised their floor with improved depth, their ceiling ultimately comes down to Tatum and Brown. That's not exactly a bad problem to have since ya know, both are really fucking good, but never before in either of their tenures have we seen the keys to the franchise been given to both. There is no 3rd All Star at the moment. No Kemba or Kyrie or Hayward to worry about shots or role or any of that. The boss and the new coach are all in

As good as both were last season, there is still room to improve. If the Celts want to prove that last season was the exception and not the rule, it starts at the top. The good news is that when you look at both players individually, for the most part they've improved in each season they've been in the league

Leaps were taken. Skillsets were added. Accolades followed. You sometimes forget how young these guys still are, and to be this good this early is exciting. But there's also the other side of this reality that is just as legitimate. Tatum and Brown shared the floor together in 51 games and 1,263 minutes. Outside of Tatum's battle with covid and Jaylen's season ending wrist injury, these guys were out there a whole lot. As we know, the team wasn't what we hoped. In fact they stunk for large portions of the season. Is it their fault? Not solely. While I think the hope is with a better supporting cast even if you get the exact same versions of both Tatum and Brown the team should be better, in my opinion they still need to go up a few levels for this team to truly get back to contending.

There's really no wrong answer to this question, more a personal preference. For example, there were a decent amount of responses that talked about their averages. Stuff like 30/8/6 and 26/6/6 for both guys. There were also responses around All NBA and All Star appearances. Then came answers mostly around team success. I think those are all valid. When I think of what this question means for me, I tend to go in a little different of a direction. Let's start with Jaylen.

The development of Jaylen Brown has been incredible to watch. The player he was in 2016 compared to the player he is in 2021 could not be more different. What I love about Jaylen's progression is that every year he seems to come back with something new. Early in his career, it was his shooting. Then came the muchhhhhhhh improved ball handling which helped unlock his entire offensive arsenal. Then came the automatic midrange game (50%). So it's safe to assume that Jaylen will bring an improved area(s) to his game into next season. For me, this is what I'm hoping for.

It starts with continuing to improve his playmaking. This is one area where Jaylen still needs to grow, and it'll be interesting to see how Ime's system enhances it. Jaylen is a guy who had a 29.7% usage rate last year and with that we saw a drastic improvement in his AST%. He went from 9.7% in 2019 to 16.5% in 2020. This progression was pretty evident

It's a large part of why he averaged a career high in assists at 3.4 a night. When I see Jaylen play though, I know he can continue to grow in this area. When it comes to playmaking, it's not always about making the pass that ends in an assist. Sometimes it's about reading a defense and creating the hockey assist. It's about being able to pass both our of P&R and isolation. It's about improving your ability to read defenses and know where the weaknesses are before they present themselves. With Jaylen having more and more ball handling responsibility, a leap as a passer is imperative. If you ask me to put a number on it? I'd love for him to bump that up to around 5 a game. A 26/6/5 season on his continued efficient splits would go a long way. But we'll know if he makes a leap in this department just by watching him. What type of passes does he make? Is he making quick decisions and also finding the right reads? Making others better is the responsibility of a team's best players, and that's now part of Jaylen's responsibility.

Maybe more important than his playmaking, I want to see Jaylen take a leap defensively, primarily off ball. We're in Year 6 (Year 5 of actually playing), and too often are we still seeing Jaylen still fall asleep off ball. Being late on rotations, straight up losing his man to cuts, if Jaylen takes a leap in this area I believe it'll make a larger impact than anything he can do offensively. His ability to jump a level really depends on him developing into that legit shut down two way player. Look at all the cream of the crop at his position. They can play both ends at a high level. The points are great, but mean shit if you're giving it up as soon as you get to the other end.

Since the first day Jayson Tatum stepped on the parquet floor, it was pretty clear he was a franchise guy. His ascension has been both quick and loud. Much like Jaylen, Tatum has improved pretty much every year of his career, adding something new each offseason. His handles, his body, his offensive arsenal, side step threes, defense, it's been the type of progression that you hope to see from your franchise guy. But also like Jaylen, Tatum is not done and has some similar areas I'd like to see him make improvements in. The first is playmaking as well

We really saw a change in Tatum's playmaking ability back in the bubble. The way he was able to read defenses was noticeably different. Much like Jaylen, we saw Tatum's usage bump to 30.8% and with it came a nice bump in AST% from 14.5% to 20.3%. He also had a career high in assists. Here's why it's so important that he continue to grow in this area. Entire defenses are going to be focused on stopping him. We saw how he struggled at times when teams trapped him. His ability to pass out of the post when teams send doubles will be crucial. Just like with Jaylen, it's on Tatum to find ways to elevate those around him. At his size, he can kill you as a passer in a wide variety of ways, so there's no reason to think that with Ime stressing more ball movement that Tatum finds a way to get even better.

I'd also like to see Tatum improve in terms of finishing at the rim and getting to the line more. Ready to be excited? It sounds like that's exactly what he's working on

When it comes to finishing at the rim, we saw Tatum jump from 59.3% in 2019 to 68% in 2020. Are we surprised he had a career year scoring the ball? Here's the thing though. He shot just 55% on layups last year (91% on dunks). I think that number can get higher as he continues to get stronger. Tatum finished at 48% on layups in 2019, so you can see he's already trending in that direction.

Then there's the FT issue. This is the one thing that I think will propel Tatum into that top 10 range. When he gets to the line, he's virtually unstoppable. It's a guaranteed 40 spot. The thing is, his FTA rate is still pretty dogshit. Just 25.8% last year. He's been under 30% in every season since his rookie year. The FTA numbers have been on the rise which is good, but I would ideally love to see him live in the 7-9 FTA a night range. Just look historically at all the beasts at his position, that's where they live. Durant is a career 7.6 FTA guy. Kawhi routinely averages around 7 FTA. LeBron is a career 7.9 guy. That's all not an accident. Part of this though will be Tatum's willingness to play through contact rather than avoid it once he gets to the rim. Tatum had 791 drives last season and just 128 FTA. That's…..not great. With Ime preaching to play more "bully ball", I'm excited to see what this does for Tatum's development. You want him to average 30 or more? Get to the line. You want to maybe avoid those 2-18 performances? Get to the line to help build confidence. We all saw the pictures, Tatum is fucking jacked now. He has the size to withstand a more physical offensive approach, so I hope we see it.

So when it comes to these guys taking a leap, that's what matters to me. I wouldn't exactly pin it on All NBA or shit like that. We just saw both take a legit leap last year and neither made it. It's more about what your eyes tell you. These are things we'll be able to tell pretty quickly once the season rolls around. If both make jumps in the areas I discussed, I see no reason why this team can't right the ship. It's not a guarantee, but it's not something that's unattainable.

I cannot wait to see it.