I personally choose to believe that animals on a farm are friends that can all secretly talk to each other like they do in cartoons and children's movies. So I hope this goat and rooster are being thrown the nicest compliments in the world by all the lollygaggers that watched one of their own almost be turned into the namesake of a bird of prey.

Now the goat is going to get the fair share of love for the save in this video and rightfully so because that crazed son of a bitch was throwing his body and horns around with the worst of intentions. However, I am giving my MVP vote to the rooster. He hopped into the scrum first despite being very much on the short end of the food chain, kept the hawk at bay long enough for the goat to realize what was happening, and never left once reinforcements arrived because he didn't want his feathered friend to end up a chicken dinner. Real deal hero shit.

Then you have this yellow belly. 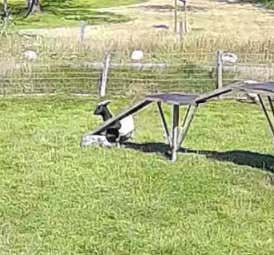 Chumps like this are how goats became synonymous with coming up short in a big spot, no matter how much the GOAT debates and emoji have spun the narrative in the other direction. But hiding like a little bitch while two chickens AKA the other animal associated with being sissies, fight off the talons, beak, and predatory will of a hawk is downright embarrassing. The other animals better be calling this goat all sorts of names at the feeding trough if/when this video makes its way onto the farm.

P.S. Not to steal Carl's wonderful (FULL) movie franchise, but I had to include Charlotte's Web just because this type of camaraderie amongst farm animals reminded me of this lovely story that makes me cry every single time. Fuck Templeton though. He's a piece of shit cut from the same cloth of that coward goat.