I know this is supposed to be the heat of Ryder Cup szn and this company has enough Benedict Arnolds running around.... but this was a mistake. A BIG one. As much as I want to throw on my red, white, and blue and go to bat for Patrick Cantlay here, I simply cannot. There's just no way that he had a better year than the world's #1. Sorry.

Let's look at some top level numbers for a sec:

You look at those numbers and you can draw some conclusions, most of which would probably lead you to believe Cantlay was the rightful POY. The W's definitely jump off the page. But let's add some context here.

Patrick Cantlay may have raised 4 trophies, but let's be real. Jon Rahm was going to win the Memorial going away. It was an absolute romp thru 3 rounds before the most shocking bomb of the year was dropped on his head. He was up by 6 strokes on one of the strongest fields of the year. SIX! Rahm missed out on a fat paycheck there ($1.675M to be exact) but let's at least be fair and give him his proper W there, which takes one off the board for Cantlay. Just like that W's are 3-2 Cantlay.

Hmm, but let's take that a step further. If Rahm gets his W at the Memorial, then he's got 550 more FedEx Cup points to his name. Those 550 points launch him from 4th to 2nd going into the Tour Championship, which means he would have started at -8 instead of -6. Those 2 strokes are the difference between Rahm losing to Cantlay by a stroke, and him beating out Cantlay by a stroke. Which, by the way, is a $10 MILLION DOLLAR DIFFERENCE in their FedEx Cup payout. Straight up, Rahm beat Cantlay at East Lake by 3 strokes and nobody in the 30 man field shot lower than his 266. As far as I'm concerned, this is just another W Cantlay stole out from under Rahm, and he should be sending him a fat wad too.

So now that we've got some context to those numbers, Rahm should have had 3 wins - the Memorial, the US Open, and the Tour Championship. Three BIG TIME heavy hitters. Cantlay should have had 2 wins - the Zozo (yawn) and the BMW (respect).

This PGA "Superseason" also featured 6 majors due to COVID reschedulings. Their results in those:

This is an obliteration. Rahm showed up to play in nearly every single one of those tournaments. Cantlay was never even a factor. Rahm even ran up the score by notching a Top 10 at THE PLAYERS while Cantlay trunk slammed.

The difference in consistency in both of these guys' play really jumps out when you look at their Official World Golf Ranking pages: 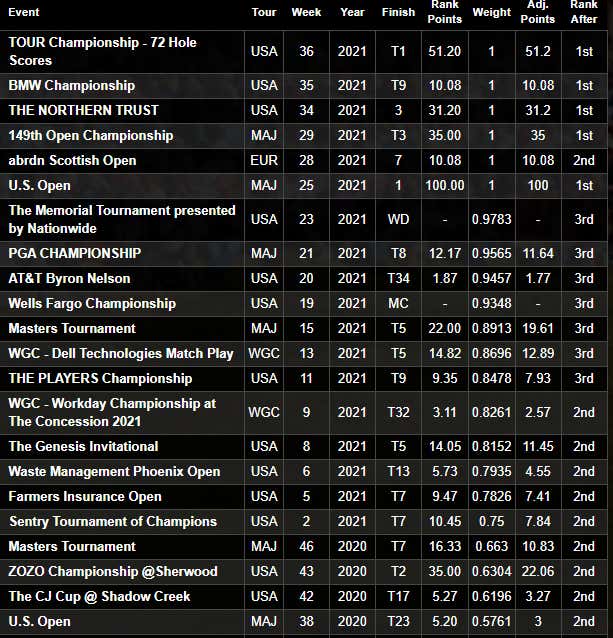 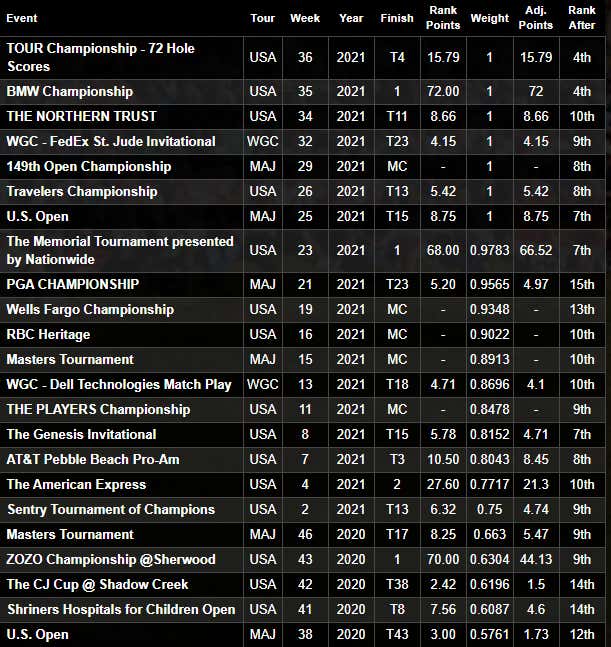 By the way, Rahm has a commanding lead at the top of the OWGR board. 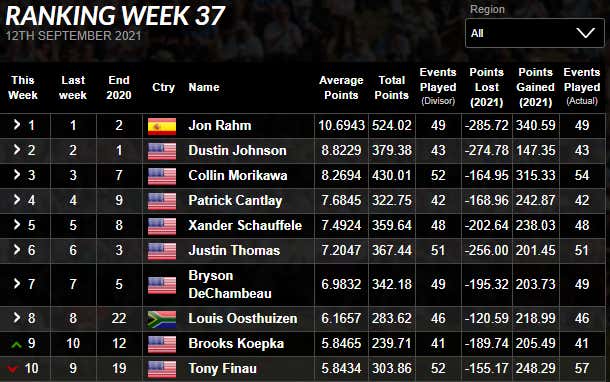 The gap between him and DJ at #2 is almost as large as the gap between DJ and #7. Guy is dominating his peers and only getting better. Should I keep going? He was #1 on Tour in total strokes gained and the only player to average more than 2 strokes gained on the field per round. 15/22 on Top 10's is some peak Tiger shit. And on and on it goes.

I know Jon Rahm tested positive for COVID. A lot of my case is based on the what-if if he hadn't. He paid a big price for it, namely in his wallet. I'll leave the argument to somebody else on whether that's fair or not. But the Player of the Year award should be reserved for the player who was the best on Tour all year. Patrick Cantlay wasn't that guy. He had a good year, sure, but he mostly just played 3 great weeks of golf at the end of the year. If you're just gonna give the POY to the guy who wins the FedEx Cup, why even have the award?

Again, gives me no pleasure to soapbox for Jon Rahm here. Especially right before the Ryder Cup. But this should have been no contest. Jon Rahm had a dominant year. Give the man his damn roses.