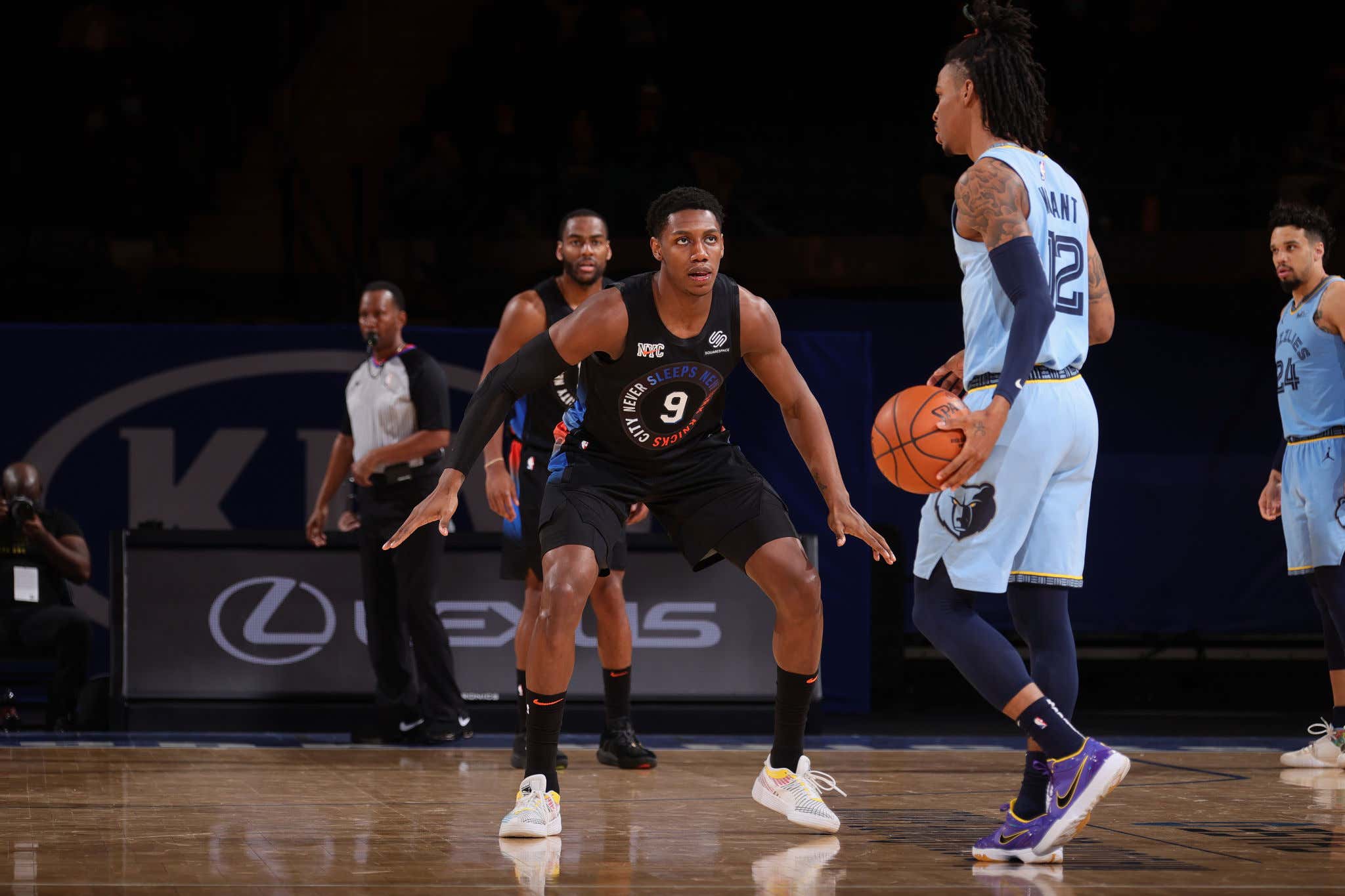 Throughout NBA history, there are certain benchmarks you look for when it comes to young players taking a leap. When you look over some of the best players in the league, you see them really starting to round into form around Year 3-4. That jump from Year 2 to Year 3 is pretty important, especially when it comes to franchise guys. Guys like Dame took his leap in Year 4 as did Steph and Giannis. Donovan Mitchell/Jayson Tatum/Bam/SGA took theirs in Year 3. Luka/Trae were unique in that they had jumps in Year 2 and 3. You get the idea. This is generally a widely accepted timeline benchmark to look out for when thinking about the young talent on your favorite team. So I wanted to take a look at some guys that I feel are positioned to take this type of leap. Some of the names are obvious given how good they already are, but others I found to be a surprise once I dove into the numbers. This could always flop, but when you have the right mix of talent + opportunity, chances are you're going to take that all important leap. Let's dive in.

You already know Ja Morant is awesome, well at least you should by now. But what if I told you we haven't even seen his leap yet? We saw initial signs that a leap was on the horizon after his Year 2 season where he had career highs in 3PM, REB, AST, and PTS and then averaged 30 in the playoffs. That alone should tell you a 21 year old is on the verge of breaking out. Then I decided to look at his comps around the league and compared their situations from Year 2 to Year 3.

Despite an increase in Usage, Morant only finished at 27.2%. I don't think it's crazy to suggest that he's following the same sort of path as Donovan Mitchell had in UTA. Came in and started right away. Saw career highs all over the place in Year 2 while increasing his points per game by around 3 points, just like Morant. We saw Mitchell's usage hit 30% in Year 3, and that was his breakout season. He made his first all Star team. Morant only took 15 FGA a game last year, and I don't think it's a stretch to suggest that he gets that number to the 18 FGA range. That in theory should get him well over 20 a game. We also saw Morant bump up his FTA rate to 38.2%, which is higher than someone like Mitchell has ever had in his career. Another good comp for this would be what happened with Collin Sexton. He took a leap in Year 3 after having career highs across the board in Year 2, got his FGA up to 18.4 last year and then had the best season of his career (24.3). The big thing for Morant will be if he can figure out his efficiency, but if he continues to attack the rim at a high level, that should happen.

Barrett is another guy that showed signs of a pre-leap last year. You'll notice a common theme here, but Barrett also had career highs across the board last year with his biggest development coming with his outside shooting. He jumped from 32 to 40% on 4.3 3PA a night. It'll be interesting to see how his usage is impacted with the additions of Kemba and Fournier who are going to need their shots, but Barrett is an easy choice for a legit Year 3 jump. This is a unique situation where it's not just about the talent development, but also about the opportunity and role. Barrett's situation sort of reminds me of Jaylen Brown's situation heading into his Year 4 (3rd as a regular rotation player). The 2019-20 Celts had plenty of mouths to feed with Kemba/Hayward/Tatum etc on the roster. He hovered around 23-24% usage rate from 2018-20 just like Barrett currently is doing with the Knicks. It's my thinking that with these additional scorers now around Barrett and Randle, that will open up space for both. If Barrett's shooting proves to be for real, his leap is coming. Remember, he shot over 41% on catch & shoot threes last year on over 4.0 attempts a game.

With Barrett though, I think a big part of his leap will also be due to his improvement on defense. He made real strides in Year 1 under Thibs in almost every advanced defensive metric you can find. Defensive win shares, DBPM, Drtg, etc all got better. That's not exactly a surprise as he got more experience and played for a defensive minded coach, and I would expect that to continue to improve. The key to Barrett's leap is becoming a legit two way guy, just like Jaylen has developed into.

Hachimura is interesting because his overall numbers didn't really jump from Year 1 to Year 2. His points, rebounds, assists, steals and blocks were all virtually identical. So why am I including him as a Year 3 jump guy? Simple, opportunity. The Wizards heading into this season look completely different than the version we've seen these last two years. Something tells me Rui is going to be getting more than 11 FGA a night. Beal will get his shots, Dinwiddie will get his, but after that? It's time to give Rui more of an offensive load. He's yet to have a usage% over 19%, and I think this is the year it happens. His efficiency improved last year to 47/32% splits in his 57 games, and I certainly don't think someone like Kyle Kuzma is going to steal his shots. It wouldn't surprise me if we see his FGA jump to around 15ish a game and he could easily be the #2 guy on this roster. I know people will think that might be Dinwiddie, but I see a Rui jump on the horizon.

I'm almost positive that unless you're a Spurs fan, you are not spending a lot of time thinking about Lonnie Walker. I'm here to tell you that maybe you should. He's a player that has improved in each of his first 3 seasons, took a mini leap last year where he nearly doubled his scoring average and now he's on a team that no longer has DeMar DeRozan. Walker looks like a prime candidate to be someone who takes that Year 4 leap, mostly because it took a little while for him to get on the floor. He only played in 17 games in Year 1 and then played only 16 minutes a night in Year 2. Last year that jumped to 25mpg and he had the best year of his career. I think this season we see him become a full time starter. In his 38 starts last year he was solid at 12/3/2 on 42/36% with a 20% usage rate. Someone is going to have to fill DeRozan's shoes and his 26% usage rate last year as well as 15 FGA a night, so why can't that be Walker?

There's also this to consider. This is a contract year for Walker. He needs to have a big season if he wants a big contract this summer as a RFA. The Spurs have shifted towards the youth movement, and if he stays healthy I think we see a breakout year for Walker.

I know it's been a rough summer for PJ Washington, but I do think that things are going to start to turn around for him once the season starts. He's in a very similiar situation as Rui in that his numbers from Year 1 to Year 2 were basically identical. He stayed at 30 mpg, his efficiency was similar as was his scoring, rebounding, and playmaking. So why do I think we see a Year 3 leap? Again, for a lot of the same reasons I think we see it with Rui. Opportunity.

Last year Washington was only taking 10 FGA a night, a few behind Devonte Graham. They replaced him by drafting James Bouknight, but I think it's fair to expect his FGA will be limited as a rookie. Kelly Oubre is in the mix, but in terms of their frontcourt they are super young. Remember, Cody Zeller isn't around anymore and he was taking just under 7 FGA a night. Now that Washington proved his outside shooting is for real and a lot of the other bigs on this roster being super young, the opportunity is there for him to have an increased workload. We should see his usage% get over 20% for the first time in his career, and for him the jump will come if he's able to improve his midrange game. He shot just 28% from 10-16ft and 23% from 16-3P. He doesn't take a lot from that area but he has shown the ability to stretch the floor, so if he improves in that area offensively, the sky is the limit.

Who knows what the hell is going on with the Cavs guard rotation, but one thing I do know is that Darius Garland is a prime candidate for a Year 3 jump. He checks almost all the boxes. Signs of a pre-leap year in Year 2 with career highs across the board. A great opportunity as a starter, and a rebuilding team that is going to give him (and Sexton) the keys moving forward offensively. His jump in efficiency despite increasing his FGA is what would have me most excited as a Cavs fan. Went from 11 to 15 FGA and saw his shooting go from 40/35% to 45/39%. That's legit. His playmaking made a huge jump as well from 3.9 to 6.1. Even his usage rate lines up with those who took a Year 3 jump. He started at 20% as a rookie and finished 24% last year. Why shouldn't that continue to increase? I wouldn't be too concerned about Sexton being their either mostly because both were able to take legit steps forward last season despite both being on the roster. I am not someone who thinks they can't coexist.

Garland has the perfect mix of pre-leap production, usage, and opportunity. Very rarely do we see guys with those three things NOT take a Year 3 leap. I don't think it should shock anyone if we see Garland become a 20/6 player with good shooting splits, that's certainly where it looks like he's headed.

We could go on and on because there are a ton of Year 3+4 players that intrigue me as we enter the 2021-22 season, but this feels like a good place to stop. I'll now open it up to you, the fine reader of this blog. Who is a Year 3+4 guy that you anticipate takes a leap?

Credit to me for not including any Celtics in this list despite my thoughts on the matter. It's OK to give other fanbases a little shine because the young talent in the NBA keeps getting better and better. It's coming though.