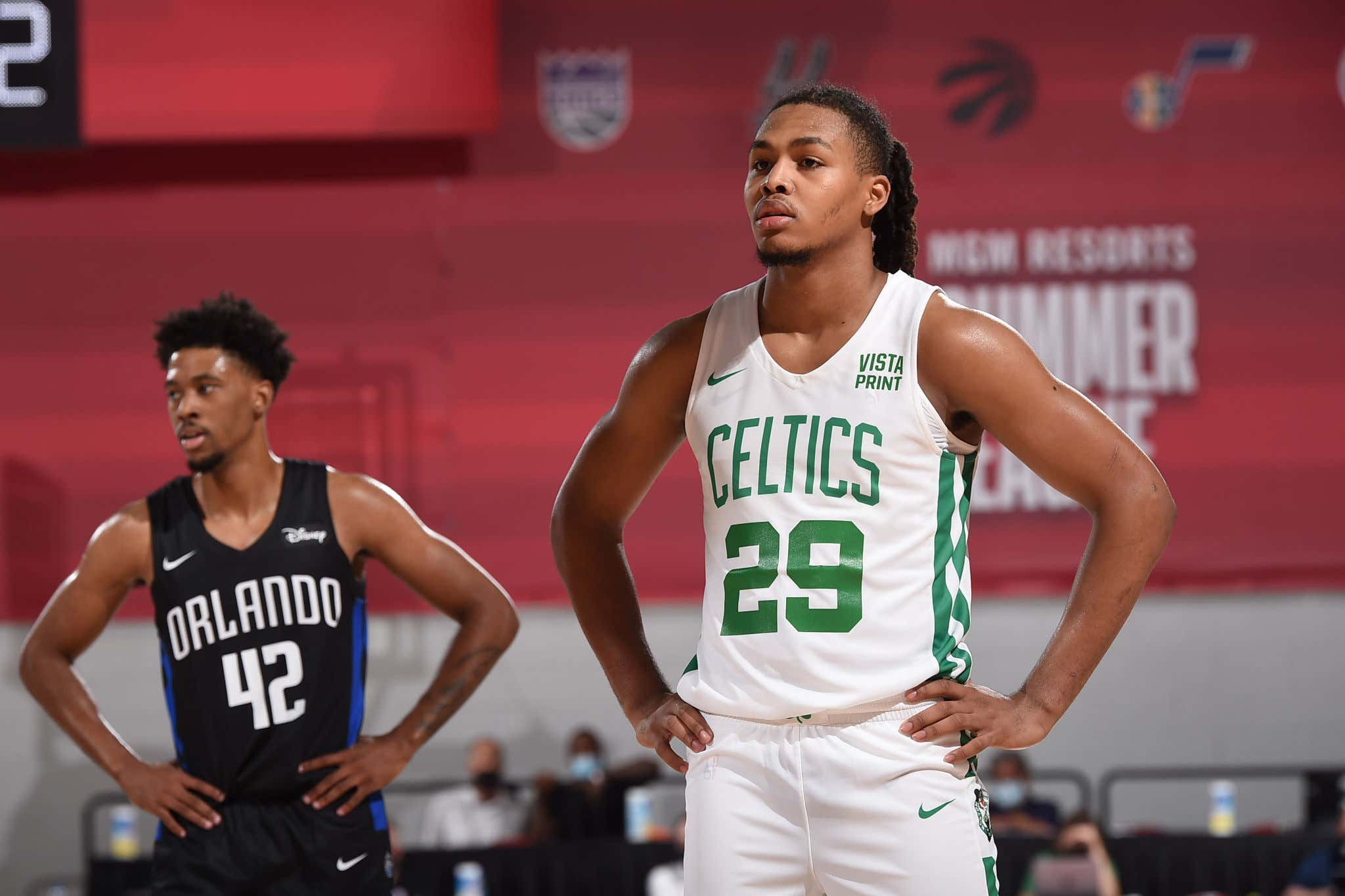 What did I tell you? After Tuesday's complete and utter domination of the Nuggets I titled that blog "The Summer Celtics Are Dominating In Vegas And Show No Signs Of Slowing Down". I dare you, no, I double dog dare you to find the lie in that statement because here we are. Another massive Summer Celts blowout, a game where at one point you wondered if they would actually win by 50 points. That is not a typo. It got to the low 40s with plenty of time left. So let me ask, does this look like a team slowing down to you? Sure doesn't. As of this morning they are the only 3-0 team in Vegas and they have the highest point differential at +21.3. The next closest is the Pelicans at +16.0. They are destroying people at the moment and every game seems to be better than the last. It's incredible to watch. I would argue that nearly every single thing we hoped to see in Vegas is currently happening. I think we all understand that this is Summer League and not the NBA Finals. But like I wrote yesterday, these games matter more for this roster. The players we're seeing play well and take steps forward in their development are going to be heavy rotation players next season once the real games start up. So don't let anyone try and make you feel bad or weird for enjoying watching your favorite basketball team wipe the floor with the competition. Call me crazy but as long as they keep score, I would like to win and I will enjoy when the team plays well.

And with Thursday being their best performance to date, you know the drill by now. It's time to talk about it.

- Watching Payton Pritchard dominate these games almost feels a little unfair. He's WAY too quick for everyone and his range looks better than ever

I don't care if this is Summer League, preseason, the regular season or the playoffs. Making it rain from 30+ feet is making it rain from 30+ feet. This is not a "once in a while" thing with Pritchard either. This is his normal range. These aren't prayers for him, they're layups. When you thought to yourself what you hoped to see out of Pritchard, hasn't it been exactly what he's done? The shooting, the poise he plays with, and my personal favorite is the playmaking. Another 9 assists last night after 12 on Tuesday, he's without a doubt been the best player on the roster. Shit, maybe even in all of Vegas

His assist to turnover ratio is something insane like 42:4. The man only took 9 FGA last night and ended up with the second most points of any starter. I think we can all agree that he is way too good to be playing in these games yet at the same time I am thoroughly enjoying watching him destroy teams. Then you hear what he had to say postgame and I don't know how you couldn't be on cloud nine

Looks like maybe that Danny Ainge fella knew what he was doing? Imagine that.

- The beauty of the Summer Celts start is as solid as Pritchard has been, Aaron Nesmith has been right there with him and last night was no exception.

After his flamethrower of a performance on Tuesday, last night we saw Nesmith mix it up. There was more scoring off the dribble, we even saw a little bit of a floater game which was new and beautiful. The defense was improved as well and he led the team in rebounds while shooting over 50% from the floor. The biggest difference I noticed is that Nesmith appears to be more comfortable and confident putting the ball on the floor. He doesn't look like that same guy who just ran to the perimeter and hoped someone would pass him the ball. He's way more assertive offensively as he should be because he too is way too good for Summer League. He, like Pritchard, have shown to be a cut above. That's exactly what we were hoping for.

- Now I don't know about you, but I find it pretty awesome when we see the Celts set records. It's even better when it's this type of record

Remember when Ime basically called Brad's old offense dogshit right to his face? That he wanted to play with more ball movement? Well, so far so good. To the point where no team in the history of the Summer League has had a better performance when it comes to sharing the basketball and creating for others. It wasn't just Pritchard either. Juhann had himself 8 assists, same Hauser had 7 off the bench and he's not even a playmaker. He's a catch & shoot guy and he was still creating for others. There's pretty much two areas we need to see this team improve on. Defense, and playmaking. So far, that's what we're seeing

- Defensively they held the Magic to 37/27% with 15 TOs. Only 1 player on their roster finished in double digits. Offensively the Celts finished an absurd 54/43% with 19 3PM. They never had a quarter under 25 points, and remember these are only 10 minute quarters.

- I think we can all agree that Brad has had himself a pretty decent offseason so far. The man simply keeps on winning, this time with the signing of Sam Hauser to a Two Way deal. The guy can flat out shoot the basketball

He saw one drop and that was that. Hauser barely hit the rim no matter where he shot it from. The thing with him will be how he improves defensively once he's actually playing real NBA speed, but remember this is a Two Way guy. He's not going to be perfect right now, but he does possess a skillset that this team desperately needs. You combine that shooting ability with the development of Pritchard/Nesmith and then the already elite offensive game of the Jays, and you have something interesting.

- Last night was also a nice bounce back effort for Juhann after he struggled against the Nuggets. He was way more active, he flashed that defensive potential and the 8 assists were a pleasant surprise. His shot is still a work in progress and you have to remember he's just 18 years old, but you can see the potential. I'll take 7/7/8 and a +21 while he continues to figure things out at this level. We just have to cut his TOs down (5), then we'll really be cooking with gas.

- It took a while for Carsen to really get going and then once he did start to build some momentum he collided with Cole Anthony and had to leave the game. He's running out of opportunities to show Brad he deserves that roster spot, and I didn't think he played all that well in his 15 minutes. His speed looks a cut above which is nice, but he's there to get buckets and he only finished 33/25%. That has to be better.

- I know it was a planned off day, but I still was bummed to see Romeo not play. He needs all the reps he can get in my opinion. He hasn't exactly flashed the same type of leap yet that Pritchard/Nesmith are making, and you're only going to get there by actually playing. He's a guy that could find himself with a great opportunity once the regular season rolls around, and given the fact that he hasn't even really played all that much in his NBA career, I want him getting as much time as he possibly can on the court so he's comfortable and confident once the real games start.

- I couldn't tell for sure, but I think Yam might have pulled his quad. He only played 15 minutes, didn't come back in even with the blowout, and I saw him working on his leg while sitting on the bench. He was better in this game with a nice 6/3 on 50% shooting in those 15 minutes, but I fear we might see him take Saturday off if he in fact did tweak something.

- Someone is going to have to explain to me why Zach Auguste has so much trouble catching the ball after he rolls to the rim. I'd say it happens no fewer than 4 times a game we see someone make a nice pass to him cutting to the rim only for him to fumble it. Just catch it.

- It was a bummer Jalen Suggs hurt his hand and sat out the second half. I wanted to see more of him against Pritchard because that dude is legit and I feel like he was the only one who was putting any sort of pressure on Pritchard as a ball handler. Not that it mattered because Pritchard could not be stopped, but I want him getting those reps against good defenders.

- I honestly have no idea what to even put in this section. They won by 37 and it was only that low because they basically stopped trying towards the end. I guess its a little concerning that Juhann has hit the side of the backboard on threes pretty much at least once every game, but that feels like I'm just trying to force something here. With the team playing like they are right now, there realyl isn't anything to complain about.

From here we move onto the Sixers on Saturday who have also looked pretty good so far in Vegas. Tyrese Maxey is having himself a hell of a Summer League as well (he had 31 last night) and essentially a spot in the title game is on the line. If the Celts win tomorrow, they pretty much punch their ticket.

That's what I'm talking about. Let's see how they look with some actual stakes on the line. Hopefully we don't see Pritchard/Nesmith get a planned rest day or anything, because tomorrow has the chance to be their best test yet. The Sixers are 2-0 with a +15 point differential. They're playing well also, so let's see both teams go at it at full strength. Should be fun.