This week was supposed to be the calm before the storm. The USMNT just got done dropping #TheDanglies on Mexico for the second time this summer and we still got just over a week until the Premier League gets balls deep in our brainboxes. So I figured we had a couple of days to chill out.

The closest thing these eyes have ever seen to a living god is up and leaving Barcelona just like that. As of yesterday they were supposedly inches away from finalizing a deal. After all the club had elected a president that Messi likes in Joan Laporta and they had even acquired his best friend to come play with him.

Then all of a sudden the deal collapsed and Messi is (allegedly) leaving Barcelona.

Now what? Where does the greatest player most of us have ever seen – and possibly anyone has ever seen – go now??

This is what the oddsmakers suspect at the moment: 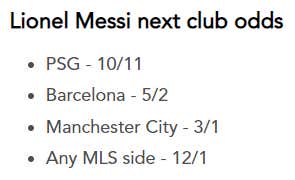 PSG are obviously the early favorites because they have been after him forever, have incredibly deep pockets and (unlike Man City) are not on the verge of making multiple $100-million-plus deals.

Barcelona are still in the running because (a) there is a possibility Barcelona's social media got hacked and (b) until he signs with somebody else I don't honestly think my brain is willing to accept the possibility he might play somewhere other than with the Catalan club that he has played for and dominated with since age 13.

(Note: there is a legit chance this is a power play by Barcelona to force La Liga – which is demanding the club cut it's wage bill but also needs to keep Messi in Spain almost as bad as Barcelona itself – to let it skirt league's internal version of financial fair play. But enough of that boring stuff. Let's just take the club at their word [dumb as that may be] and assume he is actually leaving for now…)

I am returning to what I said in a blog almost precisely one year ago: why not MLS?

Messi has nothing left to prove to anybody. He's won La Ligas. He's won Champions Leagues. He's (finally) won a trophy for Argentina. Time to start thinking about himself. And what better way than by ditching the Old World, moving the family to the US, and becoming a god amongst wo/men in the New World?

OPTION 1: Messi signs with Miami because we all know he's probably gonna end up there in a couple years anyway. Just accelerate the process. Easy peasy.

OPTION 2: MLS owners get together, all chip in on a slush fund and make it happen. Seriously, what is a couple hundred milly among billionaires??? That's chump change, fellas/ladies! It doesn’t even matter which team he plays for. In fact, don’t even assign him to one team since you might as well just hand them the Supporters Shield and MLS Cup right along with him. Instead just pass Messi around and let him play a game or two for every team in the league. The world’s greatest, most expensive “All-time offense” player in history.

I don’t care. Just do it. Bring Messi to MLS. Suck it haters. The league already shocked the world once. Time for Beckham 2.0 - bigger, better, maybe not quite as pretty but just as transformational. 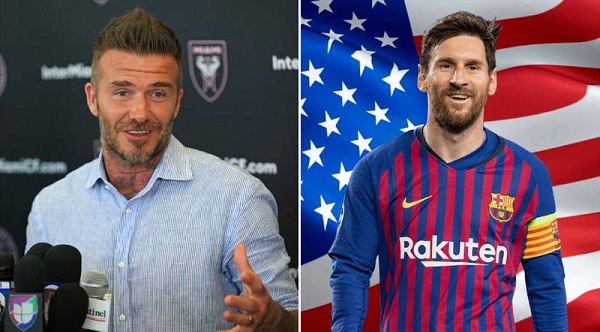 That’s all I got for now. Love and miss you guys. Lots of incredible soccer coming soon. Might if pinch off a Premier League and Guide to Picking a Club if people are interested in that kinda thing.