Source - The man who got duct taped to his seat aboard a Frontier plane was incoherently rambling and yelling shortly before he got his trap shut for him ... and it's truly a sight to see.

TMZ has obtained new video showing a different angle of Max Berry getting restrained on his weekend flight from Philly to Miami ... and it captures much of what was happening right before a male flight attendant wrapped him up in tape, and the moments thereafter.

Fan-tastic. I loved the first angle, but this one is a thousand times better. There's something about seeing his face as he's getting his mouth duct-taped that just does it for me. I think it's the defeat. Skip to 2:44 if you wanna see it. Here's a screen grab... 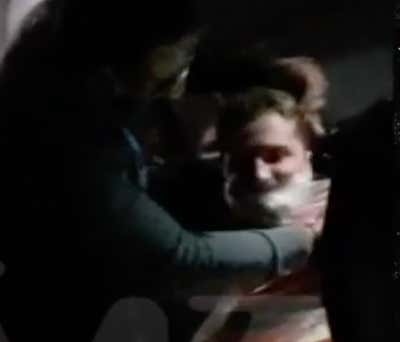 Extremely Morgan Freeman voice - "It was at this moment that Max realized he fucked up." Coley blogged the entire story yesterday. You can check that out HERE. Oh and here's the original angle…

He was arrested on "several charges" once the flight landed and was later released after posting $4500 bail. People also said they saw him consume not one, not two, but THREE alcoholic drinks during the flight. Something tells me he had a few cocktails before the flight as well, but that's neither here nor there. To quote the great Coley Mick, "He (the man) should have to stay on the plane until he gets out of the tape. It keeps making flights all around the continental US and he's stuck there for as long as that duck tape holds. Which, if you know anything about duck tape, means he's gonna be living in a puddle of his own piss and shit for months." Well said, boss. Well said. The moral of the story? Don't get blacked out before a flight and if you do, it's better to pass out than throw a tantrum. Just sayin'.