*SPOILERS FOR TODAY'S DOZEN EPISODE AHEAD*

(The main spoiler is that Trysta cheated).

One of the most controversial episodes in Dozen history aired this morning. It was the new Team Minihane with Kirk, Pat, and Trysta against my Uptown Balls squad with Smitty and Glenny. We got out to a commanding 7-0 lead, but Team Minihane then went on a 10-0 run behind well known college football fanatic and US history buff Trysta Krick, ultimately beating us 13-11.

Anyone with eyeballs who watched today's episode has come to the conclusion that Trysta obviously cheated. Clicking keyboard and mouse sounds. Wandering eyes. Screen flashes in her eyes. Clearly reading names off a screen. Confirming her teammates answers with an "it is" because she just googled it. Pulling suspicious answers out at the very last second. Being a trivia powerhouse when her hands are nowhere to be found. Getting zero questions right with her hands in plain sight. You name the suspicion and she's guilty of it.

But hey maybe it's just all a coincidence. Innocent until proven guilty. Commissioner Jeff D Lowe and head of the player's union White Sox Dave have announced that an official decision on a possible punishment is coming after all the evidence is reviewed. Just like Trysta is a company woman by saying she is "driving buzz to The Dozen," I will be a company man by putting all the evidence of her cheating in one place to make life easier for the committee and Stoolies.

And here's an up close look at just her.

We will start with the most egregious example of cheating there is. Honestly this alone should be an open and shut case. She doesn't know the answer immediately and isn't throwing out any possible options. Not thinking "Oh it could be this person or this person." Just darting eyes for 30 seconds as she frantically types in "2019 Heisman Voting" and then pulls out Hubbard after looking at her screen.

Kirk then asks for the first name, and you can see her literally look at the screen again to confirm it and say "Chub-ba." Now I'll be honest, I don't know college football well and didn't know this answer, but everyone who knows CFB says that anyone who would know the last name is Hubbard would know his first name right away and say it immediately. It's a name you pronounce in full like Jeff D Lowe. It would be like her answering "James" when the answer is LeBron. And you can see her trying to read it off the screen. It wasn't like a “what was his name again?” type of way. It was a “how do I say this word I’m reading off my screen” type of way.

She then was able to immediately steal our answer of JK Dobbins, presumably because he was on the list she was already looking at. Although to be fair this was definitely gettable and something me, Balls, or Smitty should have got. I knew it was Ohio State but couldn't think of the name, that happens sometimes under the bright lights of trivia when you're not allowed to just use Google.

It was at this point that I really was suspicious and you can hear me start to say "That kind of feels like she was just reading off a list" but nobody else was saying anything so I thought maybe I was the crazy one. I also didn't want Kirk to think I was accusing him of cheating because quite frankly he scares me and my issue wasn't with him (or Pat) at all.

You can very clearly hear her typing and her mouse clicking. I think she's even mouthing to herself "Kroy Biermann and Tyler Starr Hard Knocks" as she types it in at the beginning. She then immediately becomes very confident that it's the Falcons. To be fair, I'd be that confident too if I was reading the answer off a computer screen. 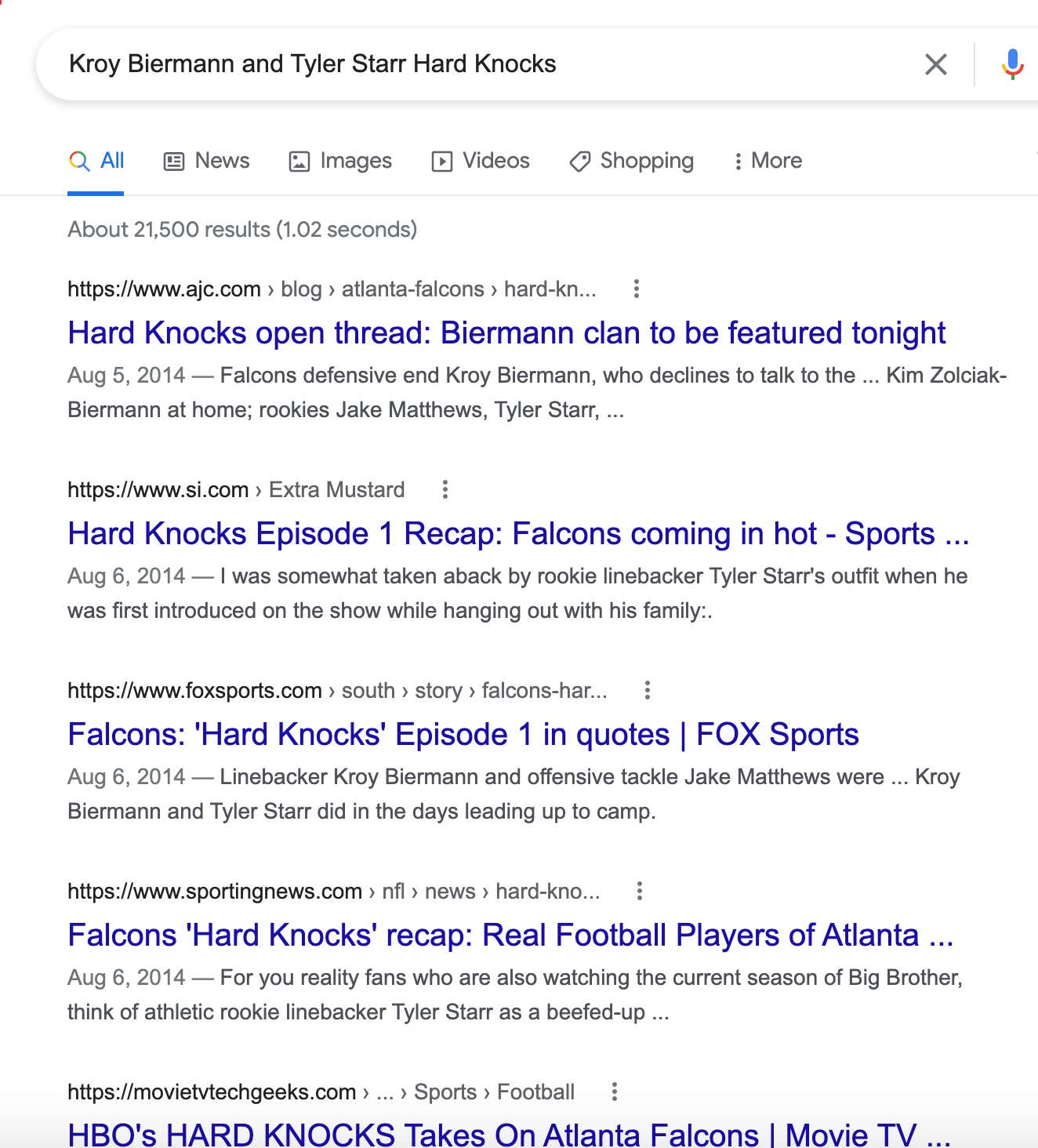 Some are saying this is actually the most egregious cheating example. There's so many that it's honestly hard to choose. Like picking a favorite kid. Just impossible. Anyway, this was a very hard US trivia question. Kirk and Smitty both know their history well and neither had this. Trysta had zero idea of who this could be early on. Didn't throw out a single name. Then miraculously, at the very last second, after looking off to the side as she pretends to rack her brain, she throws out "Dulles" out of NOWHERE. Ah yes. Who amongst us hasn't pulled Josh Foster Dulles out of their ass at the very last second?

Her excuse was that she used to live in Washington DC and the airport there is Dulles. Quite a leap. Maybe the airport has a subtitle "Dulles International Airport: He was the US Secretary of State from from 1953 to 1959 and pioneered the strategies of massive retaliation and brinksmanship."

Also today in the office, she was unable to name one single other Secretary of State ever. In history. It just so happens the one she knows was the answer to last night's question. What a coincidence.

You can hear her re-read the question out loud and literally ask "How many seconds do we have left?" so she could stall time to Google it. Kirk knew it right away and Trysta had no clue. Didn't throw out a single name of other players from that 1998 draft or any Michigan big men from the 1990s. You'd think the host of our NBA podcast would maybe have a few guesses? After a long silence, she confirms to Kirk "It is." Not "Yeah I think that's it." But "It is because I just googled it." Same exact thing with the "it is" on the steal of our question, where she had plenty of time to Google it herself. And yet Kirk still knew the answer before her without cheating.

I didn't isolate the clip for this but it's the very first question of the match. She says she knows Ashton Eaton is a track and field athlete because he went to Oregon. Believable for sure. But she doesn't know the event. At first she says decathlon, before randomly switching her answer to heptathlon in a very confident manner. Weird considering nobody knows what the fuck a heptathlon is.

Just out of curiosity, what happens if you google Ashton Eaton? 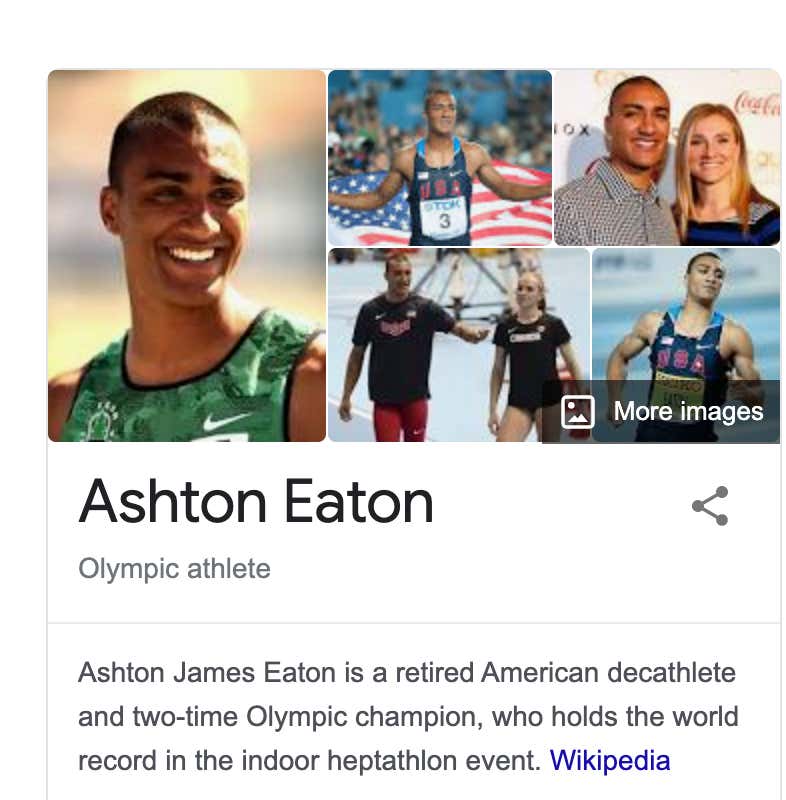 Oh it says decathlon and then says heptathlon. Very interesting.

Again not going to isolate this clip but you can watch it in the full episode. It was to name the top 20 free (non game) apps on the Apple app store in 2020. They were up first so Trysta didn't have time to Google the list, as they wrongly guessed Twitter. Then after more time passes for her to look a list up, she's unconscious! TikTok. Snapchat. Amazon. Zoom. She couldn't miss! Just confidently said every correct answer. Amazing!

There's some rounds in The Dozen that aren't easy to Google. Let's go through them and see how Trysta faired there.

World Map: Nobody gets it

Music: She doesn't get either question

Snacks and Candy: She's told to have hands visible entire time. Doesn't get either question right

But hey maybe this is all just a coincidence. Maybe Trysta is just a great trivia player and knows all these things on her own. 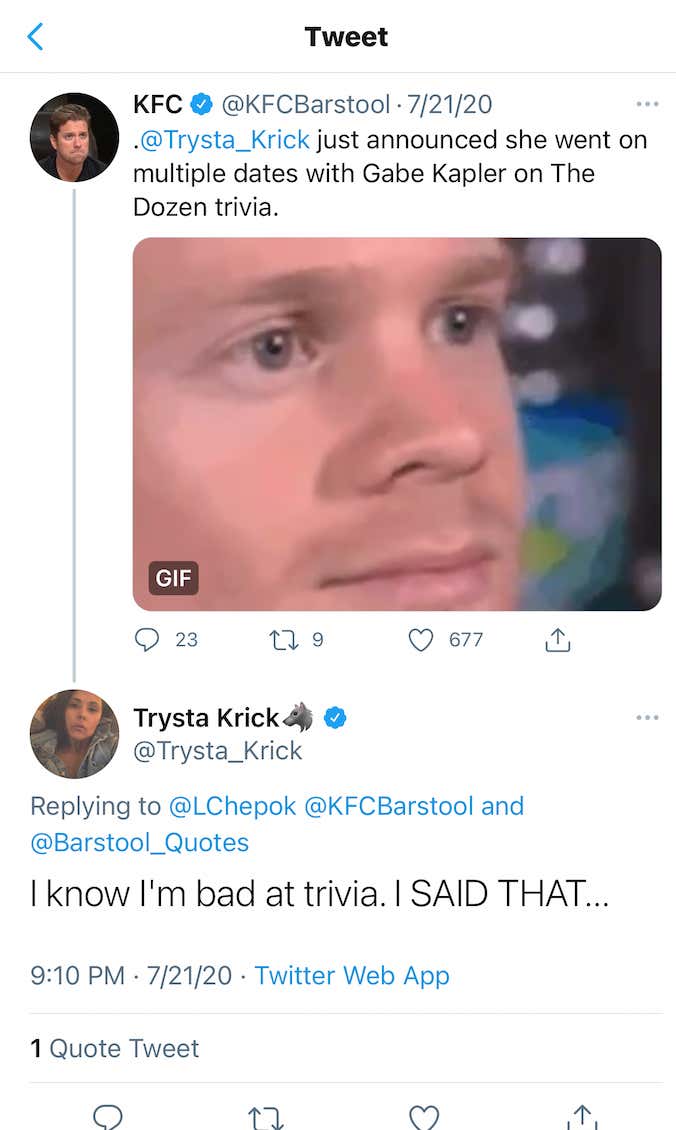 Alright maybe today she can clear up the misunderstandings in person. She'll probably be able to prove that she actually knows a lot of things. Surely she'll be able to name one single Secretary of State in history or one single Heisman finalist from this past season. She has to be able to right? RIGHT?!?

Wow. Crazy how hard trivia can be when you're not allowed to Google the answers.

But you know what? I'm biased. I was on the losing team. Let's turn to an independent auditor and see what he thinks.

I love this guy. He basically takes all the evidence I listed above and puts in a cohesive video outlining all the cheating. Worth a watch!

Now you may be wondering, what possesses a grown, adult woman to cheat at a fun trivia game that ultimately has zero consequences?

She's just a company woman that wants eyes on The Dozen. That was her excuse this morning at least. Because we all know nobody was watching The Dozen before this. It wasn't one of the largest shows on our YouTube. We didn't just have a whole tournament two months ago that was the talk of the office for weeks. Nope. It needed Trysta Krick to come on and Google answers so this show could finally get the recognition and attention it deserves (the most disliked YouTube video in show history).

But hey, we'll see what the committee has to say. Commissioner Jeff D Lowe and the player's union, led by White Sox Dave, will come to their decision, and I'll accept whatever it is.

Regardless, this was still a great match. It's a shame that this controversy has taken over the entire episode to overshadow a great performance from Kirk, excellent questions by Jeff D Lowe, and some other funny moments. Personally, I'd love to do a rematch with Kirk and Pat. Kirk is an all-time great trivia player and Pat is cool too. If they're paired up with the IBM Watson supercomputer again, it might be another loss for us. But with a new teammate, perhaps we'll stand a chance. We still probably could've won this one, but we choked it away in classic Uptown Balls chaotic fashion. Oh and Trysta was Googling all the answers too. That didn't help either.