I can't believe I have to do this, but the Yermin Mercedes/ Tony LaRussa hot takes are coming in PIPING hot from a bunch of people who have no idea what they're talking about and aren't balls deep into this team and its culture right now. I'm going to start this blog with Keith Law. Here's his cheap, low rent, garbage tweet on Yermin & TLR:

Now, I hold Keith Law's baseball opinion in the highest regard. He's been around the block in front offices, as a scout, and really knows the game inside and out. That said, he's a noted asshole. Constantly virtue signaling on the internet, talking down on people, and will NOT have conversation with anyone he feels is beneath him or has a different opinion than him... which is a lot of people. He's smug and has his nose in the air. Simply put, the guy stinks and I've heard he stinks from people who have worked with him too.

Let's break down his tweet: "Thanks Tony"??? How in the FUCK is this Tony's fault? I have been FAR from a TLR truther. I just look at each move and situation of his objectively and without bias. Here's a tweet of mine from a few months back, a tweet that I'd LOVE to walk back right now:

But I'll defend him to the death if I feel like he's getting bamboozled for poor reason, and that's exactly what this is. Tony LaRussa has nothing, NOTHING at all to do with Yermin Mercede's demise and now retirement. It's simple:

1. If a pro athlete can't handle his coach (very poorly) calling him out and goes into a mental tailspin because of it, he isn't going to be a pro athlete for too long.
2. Yermin was statistically luckier than shit for weeks on end prior to Tony calling him out. The 3-0 bomb happened on happened on May 17th. He had a .406 BABIP in spite of swinging at literally EVERYTHING. He swung at everything and the chart below shows that: 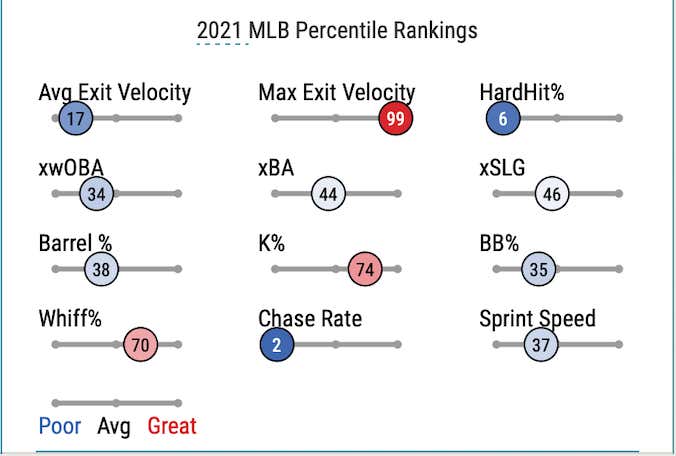 Obviously big league pitchers will adjust. When you have the ability to piss on the ball when it's over the player, you're going to stop getting balls over the plate to piss on. That's just a fact that anybody with elementary knowledge of the game can figure out. But nope… it was Tony's fault the league adjusted. Thanks Tony!!! You old racist bastard!!!

I'll reiterate that I vehemently disagree with how Tony handled that situation, but the players are adults and professionals too and can disagree with each other without simultaneously wanting to kill each other or setting the clubhouse ablaze. To say that Tony ruined the clubhouse or caused Yerm's free fall is lunacy. Nobody caused Yermin's free fall but Yermin. The league adjusted and he failed to adjust back. That's why he was sent down to Charlotte, to learn how to adjust. That doesn't even begin to describe his defensive abilities. Yermin is NOT a big league catcher. If people think Collins struggles defensively, they'd think he's Pudge Rodriguez compared to Yerm.

So Keith Law… do your homework, like I said in my response to you that you conveniently ignored. You're an advanced stats guy, go and look at the numbers and tell me TLR is responsible for Yerm's demise with a straight face. You'd be lying to yourself and your following.

Let's move on to Ben Verlander:

I don't know Ben Verlander well. I've had a few interactions with him on Twitter but I don't know the guy on a personal level whatsoever. What I do know is that he's beating this "Tony caused Yerm's downhill spiral" story into the ground. Giolito did his podcast today and I would assume he set the record straight with him.

I'll say it again, if a disagreement with a coach causes a player to completely lose it mentally, then that player doesn't belong anyways. Doesn't have the mental chops to make it in a game that features a LOT more failure than success.

Then we get to that virtue signaling LOSER Jesse Spector, that stinky butthole. If you don't know Jesse Spector, it could be argued that he's on the starting 5 of the "Barstool is the devil" team. He's got everyone who's ever uttered the words "Barstool Sports" blocked, so I had to dig up this screen shot: 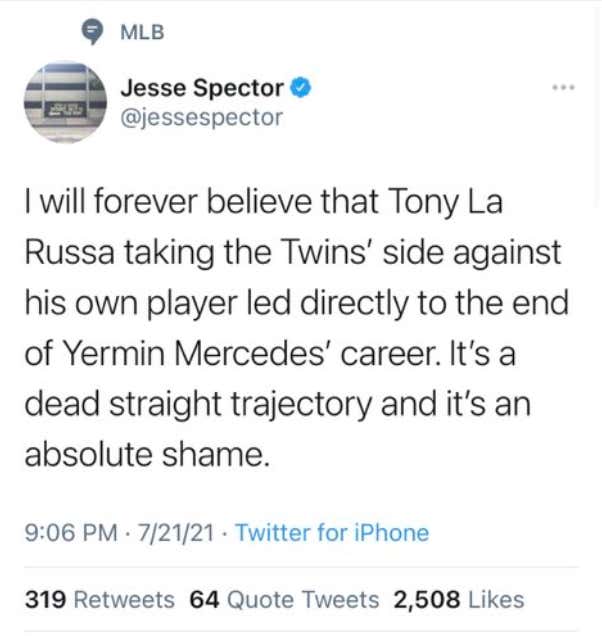 I'd like to give ol' Jesse here an impromptu quiz on the White Sox and see what he REALLY knows about this team and TLR. I'd wager he hasn't watched a White Sox game all season. I don't think he deserves the benefit of the doubt and just assume he saw the anti-kneeling quote of TLR's from 2016 or w/e and has had it out for him ever since. Doesn't matter what TA7 said at the all star break about loving TLR, that Yerm and TLR had been seen hugging it out multiple times after wins that happened after the 3-0 bomb, or that Adam Engel said the team loves playing for him yesterday on Red Line Radio.

Then we get to this guy:

I'll be gentle with this guy because he isn't really a figurehead of any sort, but he's a blue check nonetheless. I don't know him or his takes. But this is a bad take. It shows his ignorance because both Chuck an Ozzie have called out Tony MANY times on their postgame for tactical decisions they've disagreed with. Instead, this guy just jumps to conclusions and assumes that Chuck and Ozzie are a vehicle of propaganda that would make Joseph Goebbels blush.

He doesn't take into account that perhaps Yermin Mercedes shouldn't have been swinging at literally every pitch thrown to him and that THAT might have caused his demise.

I don't know Christina either, but here's the thing: even when Yerm was RED hot, he had negative trade value. He was a 28 year old positionless rookie that couldn't possibly keep that torrid pace. So no, you're not trading him for a Hall of Famer or for anyone else, for that matter. I know she's speaking in jest, but again, if anyone has watched Tony operate, taken a moment to look at how tight knit this clubhouse is, and soaked in all of the magical moments that have led to the Sox being 20 games over .500, you wouldn't trade Tony LaRussa for anyone at all. Do NOT mess with the juju right now. Too many good things going down with or without Yermin Mercedes.

Simple as that. There were many more perpetrators too, but to avoid redundancy, I left them off the blog.

So to all of these people trying to say TLR is responsible for Yerm's demise? Seriously, get a grip. The players have had Tony's back ad nauseam for months now. Yermin was a positionless DH that was struggling mightily and clogging up a roster spot. The DH spot has rotated between Sheets, Burger, Abreu, Collins, and Vaughn recently. There's NO ROOM for Yermin anymore. He had a great April and one we should thank him for as fans, but to up and quit because he was struggling and sent down to AAA like what happens to other struggling rookies? That's not on the coach, that's on the player and is a total diva move, look at me move. It was an immature, selfish "look at me" move.

I'd personally be shocked if we ever see Yerm again in Chicago. Good riddance.