So I've seen a million different pieces of content about the Bucks following last night's championship, yet somehow nobody has paid homage to the man that made it all possible. Bucks In 6 Guy.

I get that everyone is happy someone as humble as Giannis FINALLY won a championship at the ripe old age of *checks notes* 26 and Brandon Jennings actually came up with the Bucks In 6 mantra years ago before getting smoked by the Heat. However, the large man above helped inspire this year's team to take down the Hawks in 6 and called the Finals result back when we thought Giannis was actually hurt instead of being the healthiest person in the universe.

Can you imagine if the Suns had won the Finals in 4 games? The #SunsIn4 guy got his own Barstool clothing line, private parties, and his dick proverbially (and maybe literally) sucked a million times for what was a legitimate Hall of Fame viral video in the Western Semifinals. Yet somehow our chonky god doesn't get any sort of acknowledgement for calling the Eastern Finals AND NBA Finals? For shame! 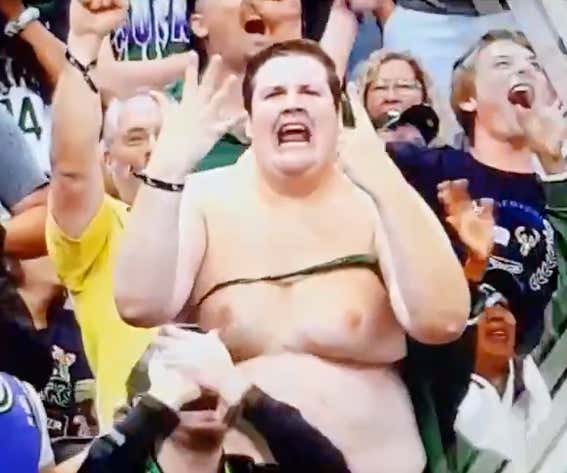 I sense great vulnerability. A man-child crying out for love. An innocent orphan in the post-modern world. I see a parasite. A sexually depraved miscreant who is seeking only to gratify his basest and most immediate urges. His struggle (with ripping his shirt) is man's struggle. He lifts my spirit. He is a loathsome, offensive brute. Yet I can’t look away. He transcends time and space. Bucks In motherfucking 6 Guy.

Get that man on a parade float along with a 30 pack of Miller Lite and a bunch of championship shirts from the Barstool Sports store for him to rip through like it's a Hulk Hogan Greatest Hits video.

Congrats to all Bucks fans but especially the ones from Oshkosh.