The first problem with Jon Stewart is that the Mets are trying to kill him (but that's neither here nor there).

The second Problem With Jon Stewart looks like it's going to be top notch.

Jason Alexander channeling Jeff Bezos' chode energy, a mop playing Richard Branson eerily well & an appearance by Mark Zuckerberg in the form of an easily sunburned cat is a strong start. Excited that after a six year hiatus from TV following The Daily Show, Stewart is returning to his host seat & live audience for Apple TV's The Problem With Jon Stewart. Print the hats, Dana B… one of the best in the biz is BACK.

The Problem will be an hour-long series that takes an in-depth look at one topic per episode, including issues that are “currently part of the national conversation” and subjects relevant to Stewart’s advocacy work. Stewart will host and executive-produce the show, and each season will also feature a companion podcast that furthers the discussion on each topic.

Lest anyone forget I'm a huge fan of his. At The Daily Show he (and his incredible staff) ran a program for post 9/11 veterans interested in media that I was lucky to be part of before his final season. The writers, producers & other vets I met there inspired me to step out of my comfort zone to try sketch, improv & stand up, and more importantly got me writing & believing it really was possible to have a career in creative media. Lo & behold, though it took a wonky path & many years after that, I wound up in my dream job. Plus, Jon & I were basically best friends & I was an integral part of the show and you can read more about that HERE.

: Narrator voice - He would not recognize her in any capacity & he likely had no idea she was lurking behind him in this photo : 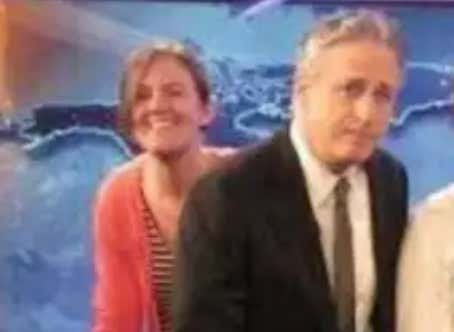 He's someone who walks the talk, genuinely cares about people in an industry often just out for views, and he can get you interested in even the most difficult of topics with a brilliance that breaks it down Barney-style & even gets you laughing. (Yes, Kate, we're all well aware of the guy.) Looking forward to it, I'll be tuning in.

the problem with jon stewart+ 3 Tags