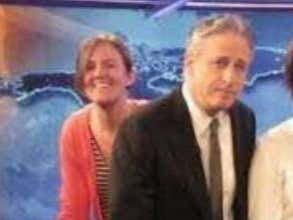 Stick with me; swear I’ll explain that awkward, fuzzy photo of me lurking behind Jon Stewart from the thumbnail (still a weird move though, Kate) but first, and most important.. 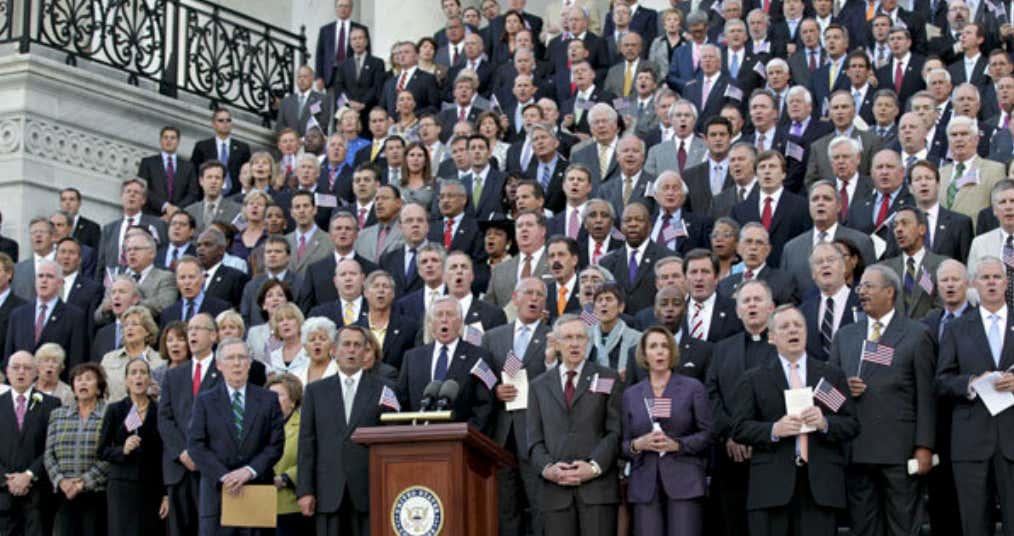 In the months after the attacks of September 11th, those on Capital Hill united & donned flag pins, gave moving speeches, & joined a massive civilian response praising first responders in the FDNY & NYPD, with promises to support them no matter what.

In a move that should surprise no one, they have not followed through on those promises as its faded from the limelight. Time & time again, those stricken with cancer & other debilitating illnesses resulting from the recovery efforts have been left to fight for help.

The 9/11 Victims Compensation Fund (VCF) was created after 9/11 to help pay for medical and economic losses as a result of the terrorist attacks — 18 years later, it’s running out of money and has to make steep cuts to its payments unless it’s reauthorized.

Many feel its a slap in the face that Congress hasn’t moved to permanently reauthorize the fund, and that they’ve had to be provoked to do something about it in the first place.

Thankfully, they have an ally who refuses to let them be ignored.

Behind me, a filled room of 9/11 first responders and in front of me a nearly empty Congress… Sick and dying, they brought themselves down here to speak… to no one. Shameful.

It is an embarrassment to the country and it is a stain on this institution. You should be ashamed of yourselves for those that aren’t here, but you won’t be. Because accountability doesn’t appear to be something that occurs in this chamber.

Lou’s gonna go back for his 69th chemo. The great **Ray Pfeifer would come down here, his body riddled with cancer and pain, where he couldn’t walk. And the disrespect shown to him, and the other lobbyists on this bill… is utterly unacceptable.

I teared up watching this because I could see the passion and the anger radiating from one of my heroes, Jon Stewart, as he pleads on behalf of our nation’s heroes. We should all feel that anger. Those who worked tirelessly in the dust & twisted metal of the towers’ shells for years after the fall put themselves on the line for people like us. It’s not surprising to see Stewart putting himself on the line for them, yet again.

Jon Stewart is best known for his time at The Daily Show from 1999 to 2015, and was a huge influence in my interest in comedy. A big fan from the start, I had no clue I’d ever wind up sitting in his writer’s room after my time in the Marines, and that it would lead to where I am today.

My final year at Fordham I had a fellowship with The Mission Continues that links veterans up with volunteer opportunities in their communities, and The Daily Show had reached out to that organization to see if any vets in NYC had interest in film or TV. Finishing up an illustrious communications degree, I was so lost & felt clueless about what path to take, but knew I loved that realm & jumped at the chance. Next thing you know, for a few months that Spring, I found myself checking in at the studio on 11th & 52nd and getting the opportunity to explore all the jobs TV production had to offer.

From the camera guys, to the producers, to the person who ran the teleprompter, they all took the time to answer questions, give advice, & help veterans in the program feel out what they might be most interested in. Stewart himself would walk in with pizzas & chat you up in a casual, genuine way that made you feel like the most important person in the room. Admiration aside, the most valuable part for me was listening to brilliant writers as they watched the news & tossed out headlines & jokes. It was a revelation…

Speaking with them, it was clear this wasn’t a job that’s easily landed. Most did standup in their free time & constantly worked at growing their comedy skills. I started doing standup, sketch, improv, working on my social media, whatever I could to get my feet wet, & fell in love with it all. With the knowledge they imparted, I started to believe in myself a little bit.

After that, The Daily Show held a job fair for us right there in the studio where they filmed the show & I interviewed with several major networks for a variety of jobs. A month later, Comedy Central called & I got a job in the production department. It wasn’t a perfect path from there, but it changed my life and it’s a huge part of why I’m here doing things I used to think were never possible for a late bloomer in this field. 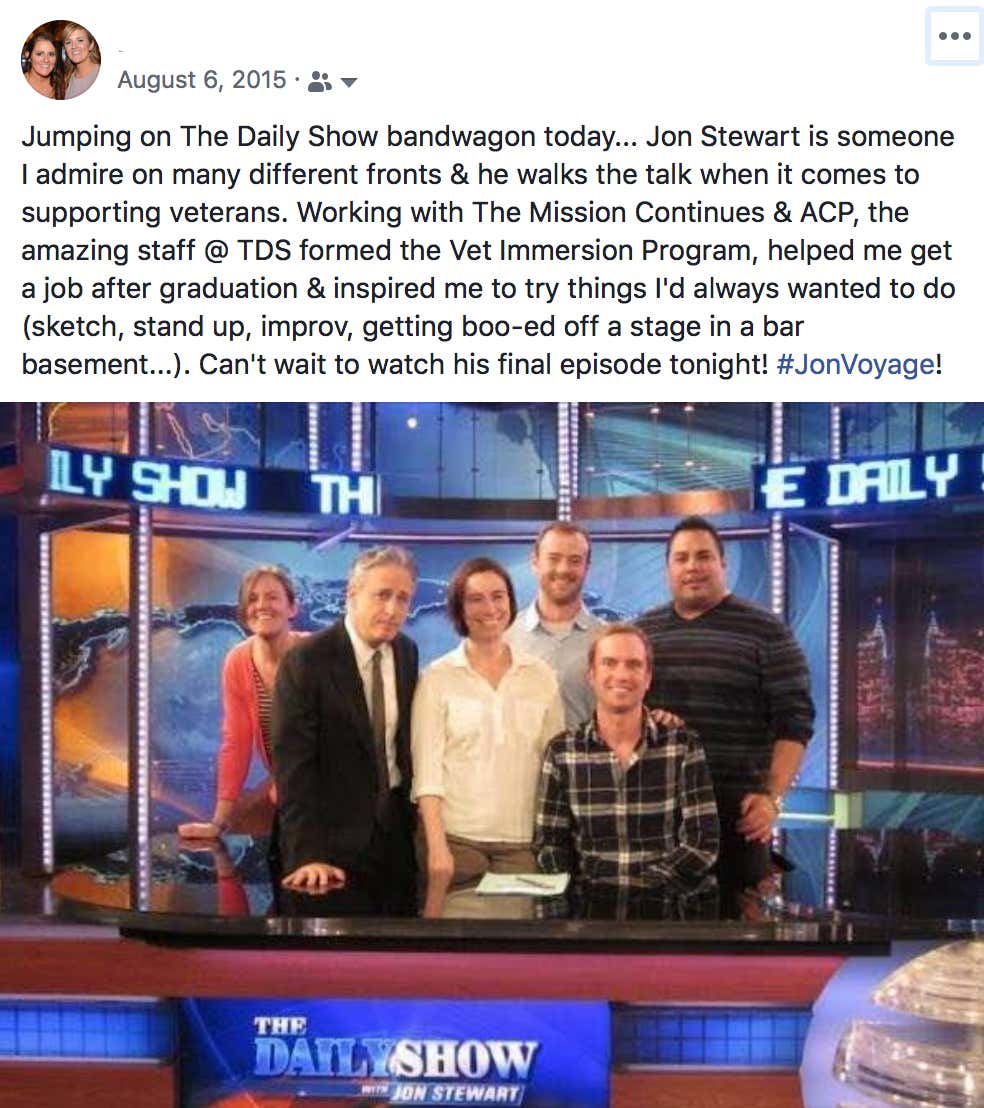 I’m not saying all this to make it about me, but because I admire Jon Stewart so much. It didn’t matter that he was an outspoken critic of the wars; he walked the talk when it came to supporting those who fought in it, and he & his team opened up a whole new world for me that seemed out of reach before. He did the same for scores of other veterans, and he did it quietly, on top of raising millions in support, without drawing attention to himself.

He advocates for a better future for veterans, he fights for first responders who deserve the very best care & treatment without having to worry, and just throwing it out there – he stans for some pretty sweet animals as well.

In a time where it seems like everything is so divisive, he puts everything aside to simply do what’s right & what’s good. His actions today on the Hill are only a small example of a lifetime of selflessness & he’ll always be one of my heroes.
_______________________________________________________________
**FDNY Firefighter Ray Pfeifer, 59, passed away on May 28, 2017, after a long battle with cancer. Pfeifer slept in his truck for a week after the Sept. 11th attacks, spent over eight months digging through the debris “for his friends” at Ground Zero, and was a leading advocate for health care for the first responders there. Jon Stewart was given Pfeifer’s turnout coat today as thanks for his efforts.