Vice-Salmon frantically jumping around on a fish farm in Germany may have been on cocaine, according to a report released by German environmental officials.

Officials from the State Environmental Agency of North Rhine-Westphalia (also known as Lanuv) noticed the strange and erratic behavior from the Atlantic Salmon in June of 2020 while overseeing a species conservation project.

“The salmon panicked and attempted to jump out of the water,” Daniel Fey, head of the Ecology and Aquaculture department, told Der Spiegel Magazine, adding that the behavior is indicative of contaminated water. “It was a response to a feeling of discomfort.”

Vice recently posted an article regarding fish that have been exposed to cocaine. 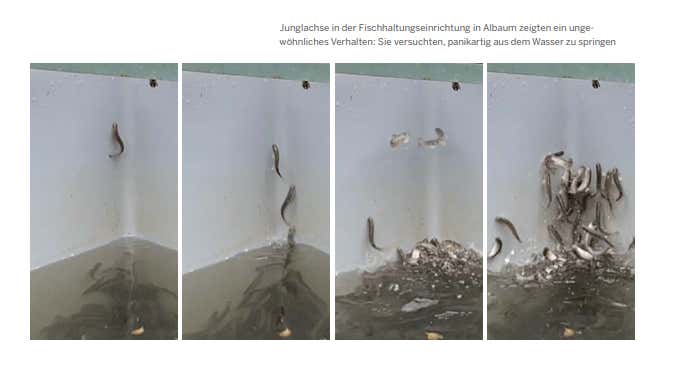 They found it in a German report, that I tried reading to see what was really going on, but it was all in german so I put it into Google translate and we are going to check out the highlights of google translated german about fish on cocaine.

Basically from the German.

"The fish started going absolutely bonkers and communicating to each other extremely fast. They then started making lofty and unrealistic plans of motivation and achieving success. One of the fish suggested that they try to escape the fish farm they were currently being held. As the photos show that one fish attempted the jump and then all the other fish followed. The frenzied nature of the fish communicated to the fish farmers something unruly was afoot, especially when the fish kept entering the bathroom in groups and coming back with nasal irritation. When the farmers went to check on the fish all the fish would avoid the farmers and swim around extremely paranoid. After about 20 minutes all the fish seemed to calm down but start to get increasingly antisocial, opposed to their previous united group activity."

Yeah, so that is the exact google translate from the Germans regarding the fish.

What they found out was there was a drainage runoff upstream of the fish, and in Europe, many drugs are synthesized from raw materials smuggled into the country as opposed to ready-made products smuggled into the U.S. This means there is a manufacturing component of making drugs within the E.U. with much production runoff into local water supplies. So basically guys were making cocaine, dumping residual waste down the drain, and getting a whole fish farm buzzin.