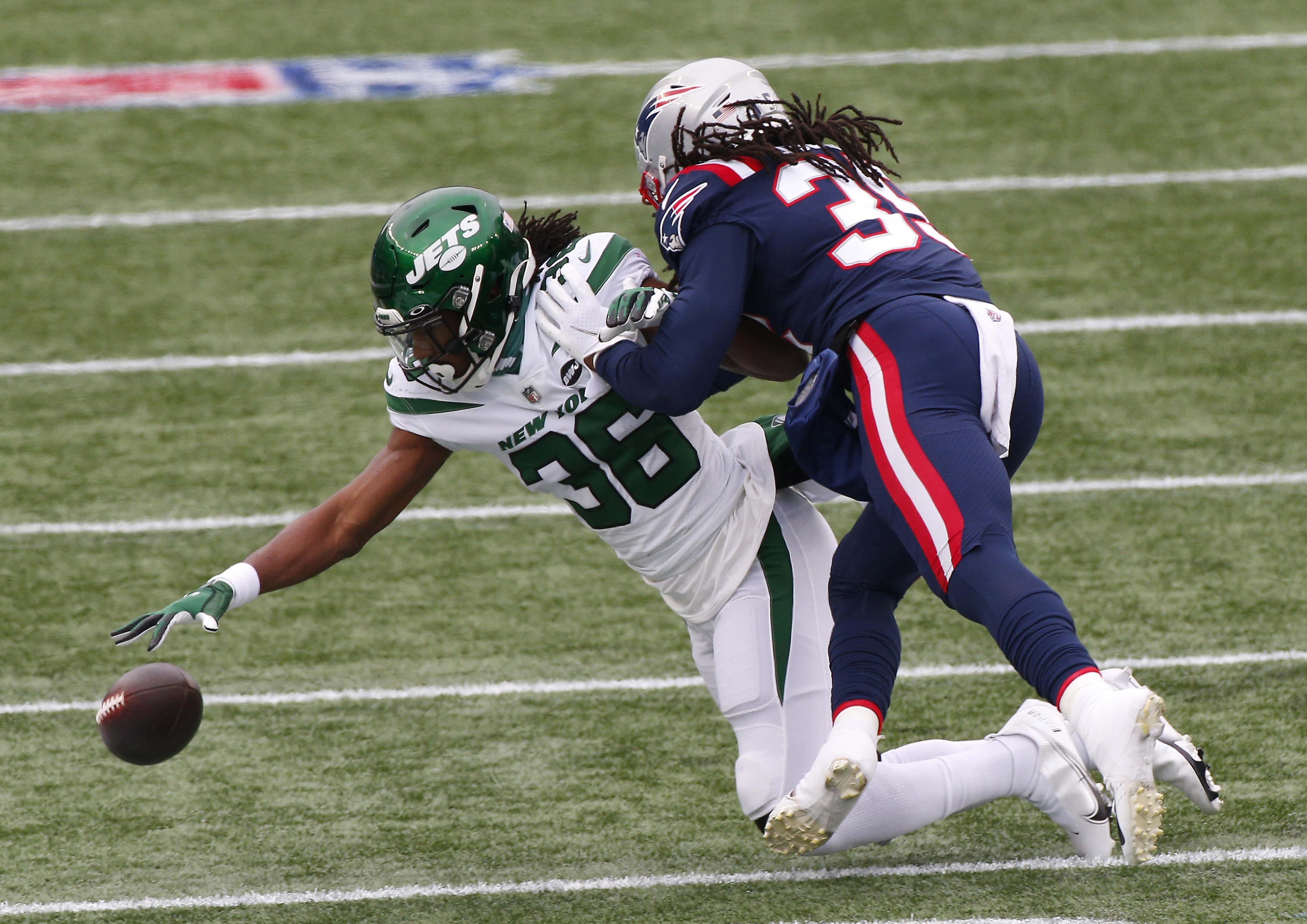 I started this series for two reasons. First, to spread enough joy and optimism among you that I might fulfill my mission and return to my homeworld. And two, to do my part to keep the memory of Ian Dury & the Blockheads alive in the 2020s. (We haven't heard the last of them. They've got another hit in them, I can feel it.) The first in the series was about the upgrades the Patriots have made this offseason in the pass rush. And sticking with the defensive front-7, now let's look at the run game.

The Elders speak of an age in the Before Times. A time of legend and myth, when mighty defenders did great deeds. The time was 2019. You may remember that season as a moment in history when a frustrated signal caller walked the land with droopy body language and a stern, angry puss on his face. Frustrated that he had but one man he trusted to throw the ball to.

But that memory, while accurate, doesn't no tell the full story. It ignores the heroic effort of the best defense in football. One that surrendered the fewest points in the league by a wide margin. That doubled up the number two defense in terms of Expected Points, with an absurd +166.75 to Pittsburgh's +86.76. (Only eight teams were in the positive numbers.) That season, 17% of opponents' possessions ended in turnovers, third best in the league.

The 2019 Pats were especially stout against the run. They surrendered the fewest rushing touchdowns (seven), the third fewest rushing 1st downs (72), and the sixth fewest yards on the ground, with 1,528. In 2020, those numbers were way up across the board, with 17 rushing TDs, nearly twice as many 1st downs (132) and 2,108 yards allowed. And their run DVOA was dead last in the league. Not surprisingly, the Expected Points plummeted to a middle-of-the-pack -113.1.

That was the effect. The cause is obvious: Personnel. They simply lost too many unlosable run-stopping bodies in the front-7 from one year to the next. Dont'a Hightower and Pat Chung to Covid opt outs. And free agents from linebackers Kyle Van Noy, Jamie Collins and Elandon Roberts, double-wide nose tackle Danny Shelton and goal line safety Nate Ebner. That is a huge flush of talent swirling the drain for any one offseason. And so the best defense in the league fell to 10th best.

They drafted replacements. But with all that loss, the usual Patriots modus operandi of bringing rookies along slowly was not an option. Like the US Marines in WWII, the new recruits were given shorter boot camps and sent to the front where they were needed while they were still green. And still, with a practically non-existent offseaon, they produced. Top pick Kyle Dugger got more reps as the season went on, and graded out as the 17th best safety at stopping the run by Pro Football Focus. Third pick Anfernee Jennings had a smaller sample size than Dugger, as part of the linebacker rotation. But among all LBs in the league with more than 150 rush snaps, PFF graded him as 11th best run stopper.

Another solid addition last year was Adrian Phillips, who stepped in for Chung as the Pats primary Big Nickel in their base 4-2-5 and led the team in solo- and combined tackles.

Of all these aforementioned names, the 2021 Patriots roster will have Hightower, Van Noy, Dugger, Jennings, Phillips and Jennings. To go along with returning edge rushers Chase Winovich and Josh Uche and interior defenders like Lawrence Guy and Deatrich Wise, Jr. All of which is a positive.

But to me, the most reasonable reasons for the cheeriest of cheer (end this sentence with an offensive ethnic stereotype and it's straight out of early Dr. Seuss) are the additions to the defensive line. Last spring, while all of New England was giddily opening packages like someone through us a Skill Position Shower, we put aside some of the best, if least sexy gifts we got. Jonnu Smith, the tight ends, the wide receivers and Mac Jones got all the oohs and ahhs, but we also unboxed:

Davon Godchaux, DT.  Godchaux is one of those classic Bill Belichick acquisitions. Signing a guy who he's seen in person playing some great football against his team. In all, the 6-3, 311 pounder faced the Patriots seven times in his Dolphins career, and seemed to always have me doing this thing:

Just consistently gumming up two gaps in the middle of the line of scrimmage, with four- and five tackle games. Like that late December game at Gillette that cost the Pats a playoff bye, when he posted two tackles for loss. Beyond that he's just 26 and coming into his prime. And having played for Brian Flores will have no learning curve in this system. And should be exactly what this defense - one that relies on at least one guy on the interior to occupy both sides of a blocker in order to have all the gaps accounted for - needs.

Henry Anderson, DL. Four years older and half as expensive as Godchaux, Anderson has also had some standout games against the Patriots. Last year he posted 10 total tackles and two TFL against them. And at 6-6, 301 lbs, he has the body type of the 3-4 defensive end that perfectly fits this system. The tall drink of water who can leverage blocks from a smaller guard but stout enough to hold his ground to set an edge against a tackle. As well as  get his mitts up in the passing lane. The role was perfected by Richard Seymour. And at the bargain price of $7 million over two years, hopefully Anderson can be a pale, faint, high noon shadow of what Seymour was in a much more limited role. The analytics nerds certainly think so. PFF had Anderson graded in the top 30 among all defensive linemen against the run in 2020. And that was the second lowest grade he's had in his six year career. This guy might sneaky be the steal of this free agent class.

Montravius Adams, DT.  The 93rd pick of the 2017 draft, the 6-4, 304 pounder has played two full seasons and two half seasons due to injury. Last year, before going on injured reserve eight games into the season, he was ragdolling blockers and on pace for his career high in tackles:

He signed with New England on a Clearance Rack deal of less than $1 million, and is playing for his next payday. Did I mention Anderson was in PFF's Top 30 at his position when it comes to stopping the run? Adams was No. 21. And had the 15th best tackling grade. A Day 2-drafted 26-year-old on a Prove It deal who was playing the best ball of his career before getting injured last year? That is exactly the kind of depth guy you want as part of your D-line rotation.

Christian Barmore, DL. I included Barmore in my RTBC I because he's considered by consensus to be the best interior pass rusher in the Class of 2021. But by no means does that make him a specialist.

Ronnie Perkins, Edge. Same with Perkins, the Pats third pick in the draft. A guy who was primarily considered an edge rusher, he's nevertheless shown he's no specialist.

My factory setting might be pure optimism when it comes to this sort of thing. I admit that. But when the Patriots are getting back key veterans from opt outs and free agency, have promising young players returning with a full year in the system, have added solid free agents and (appear to) have drafted well in order to fill this critical area of need, can you blame me? Besides, you don't have to be Ian Dury to know there's a legit reason to be cheerful when a harbinger of doom like Ben Volin is saying good things about your rookies, sight unseen. Here's hoping he and I are both right.