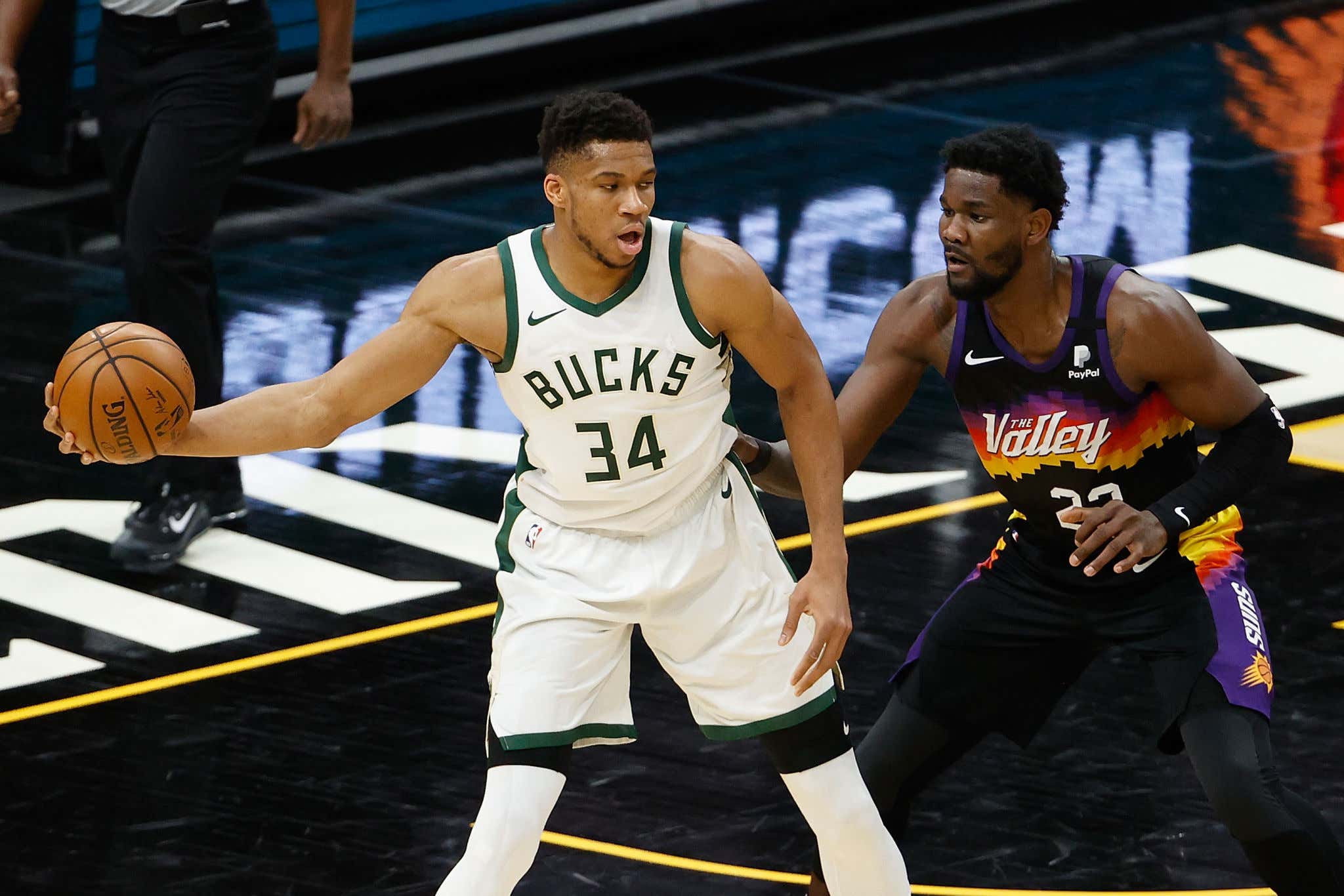 When we got to the Conference Finals and were left with a final four of PHX/LAC/MIL/ATL, I was of the belief that no matter what the Finals ended up looking like, it was a great storyline. There's just something about having a completely new crop of teams and stars that I found appealing. Legacies could be cemented, franchises could win their first ever title, the quality of basketball was pretty damn good, it really didn't matter to me how things shook out. As someone who didn't have their favorite team in that final four, I was down with any combination.

Of course, you get the takes on Twitter that the TV ratings are going to be awful, people think this title is tainted because of all the injuries, these teams are boring because there's no LeBron etc. Such an insane way to look at these NBA Finals if you ask me. First of all, not only have TV ratings been great this postseason, but who gives a fuck about TV ratings. Why should that matter to me. If people want to miss out on great and competitive basketball, that's on them. So with Game 1 slated to kick off tomorrow night, I thought I'd share why there are a ton of reasons to be excited for this NBA Finals. These aren't in any sort of order, just what popped into my brain as I write this blog.

Finally, we're all able to see Chris Paul play in an NBA Finals. It's been the one thing missing from his first ballot Hall of Fame career. His reward to finally making it this far is a date with arguably the best on ball defender in the entire NBA. That's not me talking, that's the best of the NBA talking

Holiday missed the first meeting between these two teams, but in the second matchup we did see Holiday guard CP3 on 25 possessions and hold him to 7 points on 3-6 shooting. I just think there's something cool about CP3 needing to go through an elite guard defender in order to win his first title. The Lakers didn't really have that, the Nuggets surely didn't, you could say the Clippers had Pat Bev but he be tricking ya'll a bunch so really this is the biggest test CP3 will face this entire postseason. That's a fun storyline.

2. Both regular season games were decided by a combined 2 points

Game 2 was another Suns win, this time 128-127 in OT. This time around it was a more complete Suns win with four of their five starters finishing with at least 20 points. The Bucks Big 3 all showed up with Giannis having 33, Middleton 26, and Holiday 25.

The point is, everything we've seen this year when these two teams get together has been nothing but down to the wire high pressure basketball. Why should I think the Finals will be any different?

3. It looks like Giannis is on track to play

I still don't really understand how Giannis can have that type of knee injury which looked horrific in real time and then be ready to go just 7 days later but I'm sure thankful he is. These Finals are obviously better if all the stars play, that goes without saying. Considering we're finally able to see Giannis play in his first ever Finals, that has me excited and thankful that his knee injury wasn't something devastating.

Maybe you're someone that believes Chris Paul needs a ring to solidify his place among the all time great NBA point guards (I do not). Maybe you're someone who never truly thought Giannis could be the best player on a championship team. That you couldn't win a ring if he was your #1 option because he's too flawed.

Well, one of those things is going to happen in this series. Either Chris Paul gets that elusive ring he's been chasing for the last 16 years, or Giannis is going to put to bed every single doubt that someone might have. It's pretty crazy that a player in Giannis could have 2 MVPs, 1 DPOY, a 5x All Star, 5x All NBA, 4x All Defense, MIP, and an NBA title (and prob Finals MVP) all by age 26. 26!!

Call me crazy, but that has him as a HOF talent before he even finishes his second contract.

6. These teams are really really good

One thing that never really made sense to me was why people would try and pretend like both of these teams aren't really good and absolutely deserving of being in the Finals. I'm talking regular season or playoffs, they've been nails. The Suns were 2nd in wins, 7th in offense, 6th in defense, and 3rd in net rating during the year. The Bucks were 7th, 5th, 9th, and 4th.

In the playoffs, while both have been pretty mid offensively (PHX - 10, MIL - 11th), we're looking at the top 2 defenses of the entire playoff field with the Bucks standing 1st and Suns 2nd. The Suns also have the 2nd best net rating of any playoff team with the Bucks 4th.

I'm sorry if you didn't really watch either team over the course of the year so maybe you didn't exactly have an idea of how good these two teams are, but they've been legit Finals contenders since the start of the season. Just because ESPN doesn't suck their dick like they did LAL/LAC/PHI/BKN doesn't mean these aren't two very good basketball teams. Isn't that what we all want? Two evenly matched teams who were great all season going head to head with a title on the line? How could that not excite you?

You've seen the videos. Both Suns and Bucks fans are losing their goddamn minds during this run, as they should. There's something about seeing a fanbase finally reach the top of the mountain after decades of futility. Whether it's Suns in 4 guy, their fans going nuts when the team gets off the plane, or the entire city of Milwaukee drinking and partying their face off, these are two fanbases that are going to go INSANE if their team pulls off a title. This isn't like seeing asshole Lakers fans or annoying ass Warriors fans win. Nobody enjoys that. These are two fanbases that the casual fan with no rooting interest can get behind.

You see, these two teams do have a connection well before these NBA Finals. Did you know that it was between the Suns and the Bucks for who got the right to draft Kareem Abdul-Jabbar? It all came down to a coin flip. Think of how NBA history changed with the result of that one flip. The Suns lost out on Kareem despite having the worse record. That's tough. They wouldn't have another high stakes encounter for the next 52 years, but here we are. Weird how things can come full circle. There's also ya know…this

9. We have no idea who will win

When is the last time we said that when it came to an NBA Finals? That's really been the story these entire playoffs, but it's even more true now in the Finals. I have legit no clue who is going to win. You could make a compelling and convincing case for each side. Everything you look at between these two teams shows you how even they truly are. Somehow the Bucks are in this position despite not being able to make a three to save their lives and they got here without their best player. The Suns are loaded with guys that are making their playoff debuts yet are playing like 10+ year playoff vets. The NBA Finals are a toss up, and that's pretty insane to say.

This might be one of my favorite parts of these Finals. Neither team is a superteam. The Suns were built through the draft and savvy trades. The Bucks pretty much the same way. There was no bullshit of NBA stars plotting to join forces, demanding trades and ruining the league. You could say both teams went about it "the right way" in order to get to the Finals. It's cool that one of them will be rewarded at a time where it feels like the only path to a championship is building that superteam. Not every franchise is that lucky.

I wonder if that changes things moving forward. Probably not, there will always be stars who are searching for their first ring and want to team up with other stars for the easiest path possible. That'll be here forever. But maybe the outcome of these Finals will convince a current star player that they don't need to go that route. That it is possible to win where you are. It's a pipe dream for sure, but I definitely think it helps the league that neither of these teams are superteams and one of them is about to win a title despite that fact. Truly shows that anything is possible.

So here's to hoping this thing goes the distance. The perfect ending to what has been an awesome 2021 playoffs is a Game 7 with the title on the line. It's happened 18 times in NBA history, and we all remember how epic it was the last time we got it back in 2016. Getting it this year would be the perfect way to close this bizarre 2020-21 season out.