Christian McCaffrey was limited to only three games in 2020 but still managed to average 125 total yards and 2 total scores per game. Obviously health will be a concern given his smaller stature (5'11" 205 lbs.), but looking at his first three seasons, he didn't miss a game. In 2019 he had a 1,000+ yard seasons both on the ground and through the air.

CMC can really do it all and assuming he stays healthy, I'd look for him to be right back on that track in 2021.

Nick Bosa was outstanding as a rookie in 2019 and one of the catalysts to get the 49ers into the Super Bowl. But he's another one coming off an injury plagued 2020 appearing in only two games. Now injuries were a concern for him coming into the league and he's got to prove he can stay healthy, but when he's on the field, he is a beast.

And not just your typical EDGE rusher as far as rushing the passer. The Bosa family is like the Manning family on Defense and Nick is a heady player. He was at one point in 2019 considered a front runner for Defensive Player of the Year and his Football Intelligence is off the charts.

While Young isn't as refined as his former Buckeye teammate Nick Bosa, he does have the freakish athleticism at his size (6'5" 264 lbs) to dominate at the NFL level. As a rookie, he burst onto the scene with 7.5 sacks and showed big time ability like this:

To pair with his size/speed profile, he also has a tremendous motor. He terrorizes opposing offenses for 60 minutes every week.

The common football fan may be less in tune with the Colts interior defensive line, but they should be, especially DeForest Buckner. He made headlines in 2020 by being traded from the 49ers to the Colts for a 1st round pick. The bottom line is the 49ers couldn't afford him and Buckner signed a 4-year/$84M deal with the Indy shortly thereafter the deal. He's been worth every penny so far as the former Oregon Duck has given the Colts some real juice up the middle. At 6'7" 300 lbs. he's a monster of a man who can toss Offensive Lineman on his initial move:

or wiggle free with some slippery counter moves. He finished 2020 with 9.5 sacks and is averaging over 9 sacks/season over the past three. So look at for him flirting with double digit QB takedowns again in 2021 from the interior position on the Colts D-Line.

It's always a treat while watching film when you see a blocker completely wipe his guy off the screen. Terron Armstead does it often.

At 6'5" 304 lbs., he's plenty nimble in the passing game and has protected Drew Brees' blindside since coming into the league in 2013 (fully earned the starting role in 2014). But he really shines in the run game where his power just overwhelms Defenders, both on the edges and those lined up head up over him. This block was a worthy nominee for my 2020 Block of the Year.

10 INTs in 2020 kind of says it all, but the guy also had 20 PBUs last season. QBs really need to stop trying Xavien Howard's side. Not only can he lock up the other team's #1 WR, but he'll make you pay and take the ball too. In fact, nobody has had more than 10 INTs in a season since 1981. Howard is an absolute stud at the Cornerback position.

We've heard the criticism that Lamar Jackson can't pass from the pocket, but he continually shows he has the ability to just put it on guys like this:

And while he came back down to Earth a bit from his MVP campaign in 2019, he still is a legit top 25 player in my book. You do have to tailer an offense around his skill set, but who doesn't like running and throwing? Jackson is coming off back-to-back 1,000+ rushing yard seasons and the Ravens are a tough out anytime he's on the field. He has the ability to make game-breaking highlight runs like this:

But it's these 3rd & long runs that make him so frustrating to gameplan for and play against. His legs are his 'break in case of emergency' trait in 3rd downs, but they're a heck of a Plan B.

If ya don't know, now ya know. Fred Warner is the NFL's best Linebacker. He is quite simply top notch in pass coverage.

I mean this guy is picking off Patrick Mahomes!

Kamara has one of the most diverse skill sets in the entire game. He can run the ball both inside and outside, and he can also line up in the slot or out wide and run routes like a Receiver. He's got great hands and piled up some monster numbers last year with 21 total touchdowns, including six against Minnesota on Christmas.

But what separates him from other RBs is his contact balance:

But it's not like he doesn't work on it. So when you see these insane runs on Sundays, just know that they're the product of hard work and wild preparation. Gotta tip your hat to a competitor that refines his craft like Kamara year round.

Chris Jones is an absolute force in the middle of Kansas City's defense. There is a reason Patrick Mahomes took such a team friendly contract, and he's #21 on my list. Jones was going to be a Free Agent but took a 4-year $85 million dollar deal to stay in KC which was made possible by Mahomes deal. He's a fantastic finisher at the Quarterback:

And you've got to gameplan for that strength. But what happens when you plan for the bull rush? He can beat you with some finesse moves too: 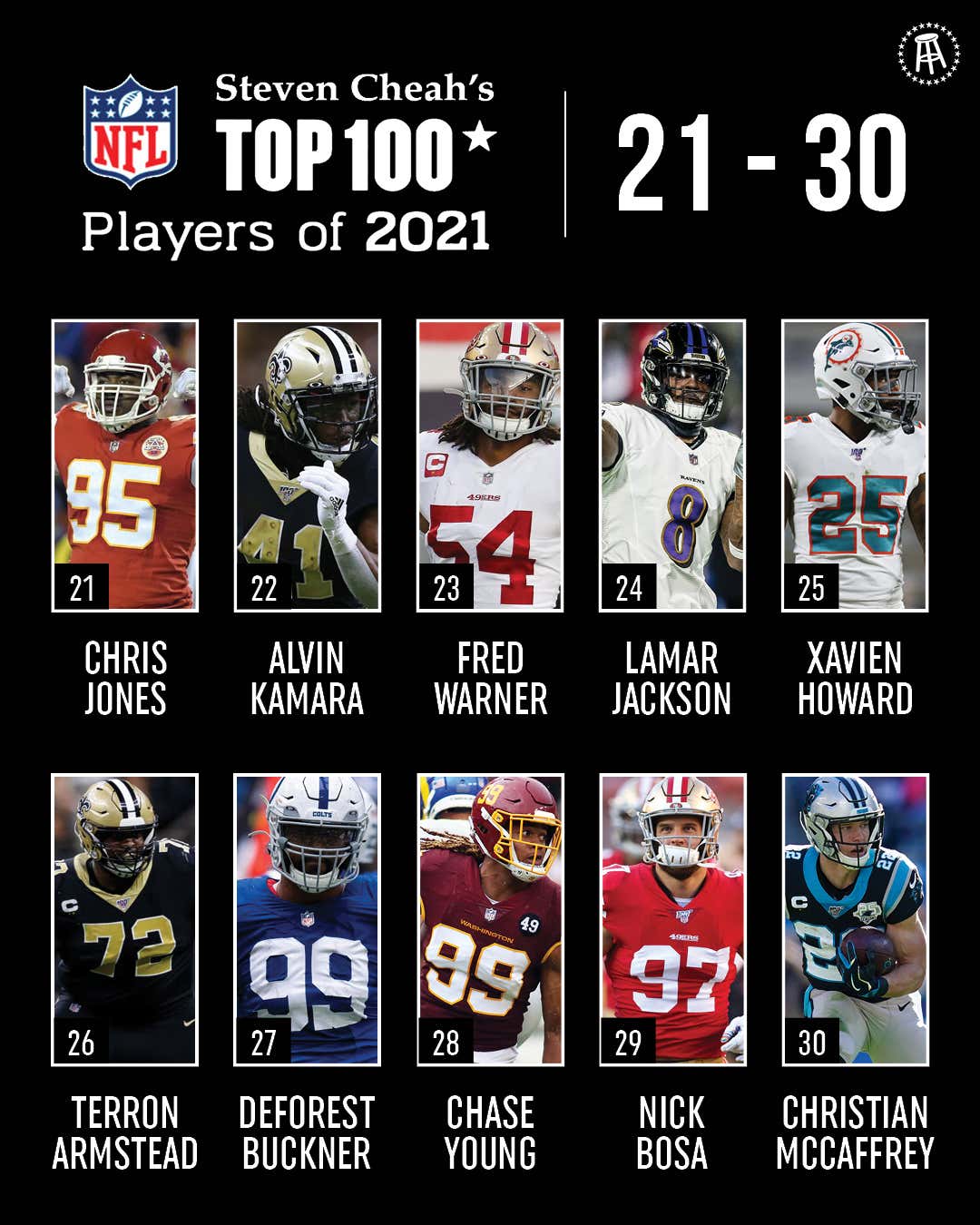