Teller has been in the league a few years but really started to get some shine this past season. He's an absolute mauler in the run game and is always looking for work.

He's also a Block of the Year Award Finalist after this showstopper:

And this dude's training also includes carrying alligators on his shoulders.

Alexander is a bit undersized for a boundary CB at 5'10" 196 lbs., but he plays big. He is one of the best press Corners in the league and has great feet, hips, and instincts. That makes up for his height as he's able to play both small and big WRs very effectively. The national media is finally giving him his shine as he made his first Pro Bowl this year.

Another 5'10" guy that made his 1st Pro Bowl in 2020, Murray had a really nice follow-up to his Offensive Rookie of the Year campaign finishing with 26 passing TDs to 12 INTs while adding another 11 TDs on the ground to go along with 819 yards on 6.2 YPC. For my money, he's the most exciting player in the NFL as there is absolutely nothing he can't do. He's so quick, has good arm strength, and throws one of the best deep balls in the league.

The first thing most people think of when they think of D.K. Metcalf from the 2020 season was his insane chasedown of Cardinals Safety Buddha Baker.

But he's actually a really really good Receiver too. He's changed the narrative that he's just a go route guy and is much better laterally than everyone expected. Metcalf is simply bigger, stronger, and faster than everyone that tries to cover him which is a huge problem for opposing defenses.

It's takes creating turnovers on Defense to really change the game. Humphrey did that better than anyone in 2020 as far as creating fumbles with a league-high eight. He's just so good an instinctual at ripping or punching the ball out, always doing it at the perfect time, and [turnover] luck favors the prepared.

Big Bear Joey Bosa is on the list after notching his 3rd Pro Bowl appearance in just five seasons. He's a load at 6'5" 280 lbs., but he's such a refined with his hand usage he can win with power or finesse. He's the anchor of a very talented Chargers Defense.

Jarrett is your classic squatty body guy standing at only 6'0" tall and clocking in at 305 lbs. He's of that Aaron Donald/Geno Atkins mold of shorter DTs that win because of incredible quickness and strength and just having natural pad level because he's shorter. But he's a complete DT as he excels in the run game:

and the pass game:

Huge jump from Baker versus last year. Yes, DK Metcalf chased him down, but remember he intercepted that pass in the red zone which counts for a lot. He makes a ton of plays from filling alleys

to being a major player agains the pass:

He is a modern day, complete Safety who can not only do it all, but do it all well.

Darren Waller is a beast, but this is an incredibly lame caption for this tweet:

He's such a versatile chess piece at a position that's becoming more and more coveted. This year we saw Kyle Pitts taken #4 overall and the Falcons are hoping he can be just like Waller. A dominant pass catching weapon who can even split out and use his size/speed combination to dominate opposing DBs.

Stanley tore his ACL just two days after signing a 5-year $99 million dollar extension. He'll likely be good to go to start the season (a big reason he's much higher on the list than the other highly rated LT David Bahktiari). He is a great run blocker

and has outstanding feet, length, and balance in pass pro

So here you have it: 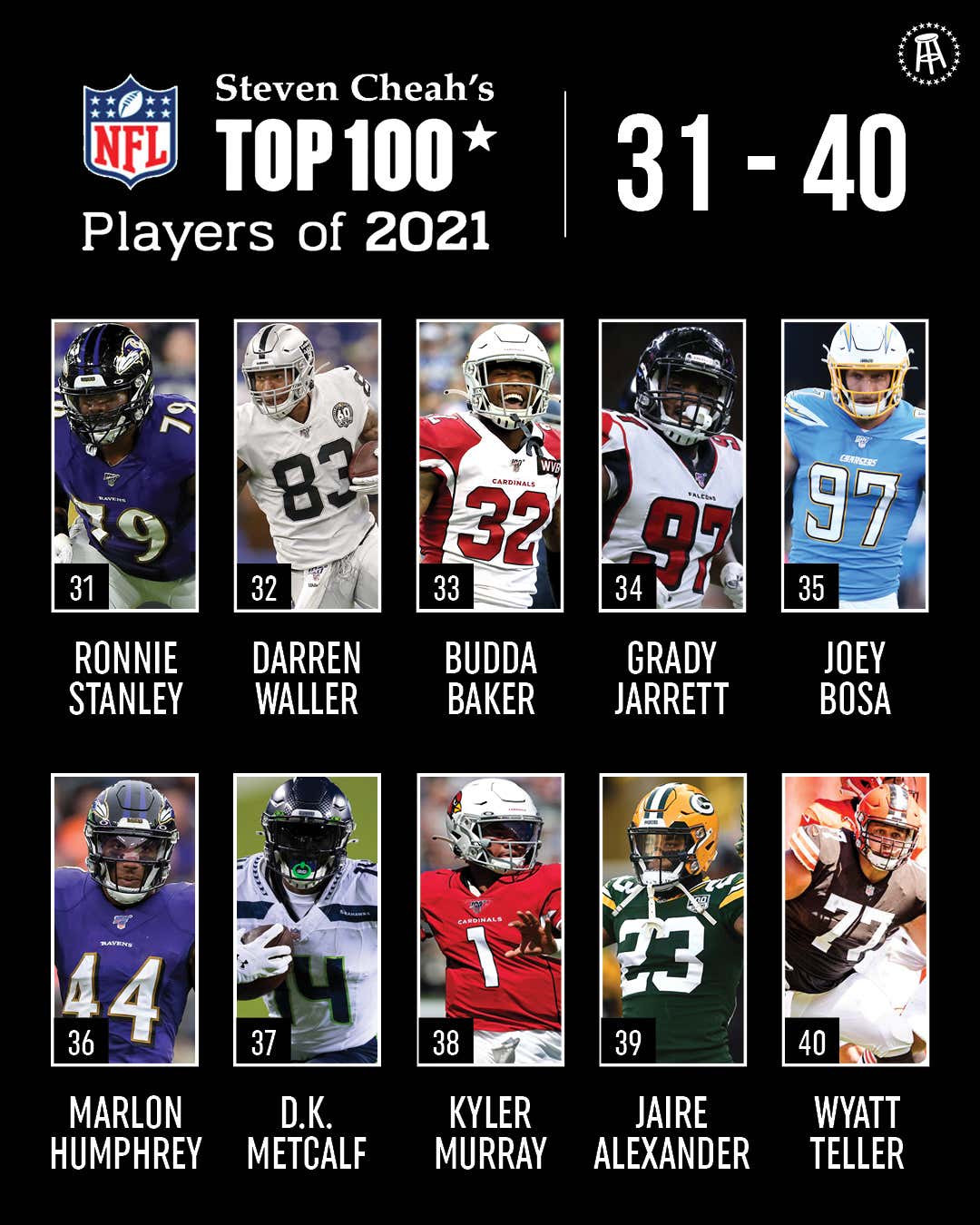