Now that we've entered into Top 50 territory, here are my guys #50 - #41. The next batch will come out every Tuesday at 11am eastern, no breaks for the 4th of July week.

Chubb is an instinctual runner and just refuses to go down on first contact. A former 2nd round pick in 2018 he's going into his contract year and I wouldn't be surprised if it was a career year. His catches were down after Kareem Hunt played a full season, but he showed improved hands. He's one of the best RBs in the league and will likely be one for the foreseeable future.

Calvin Ridley broke out in 2020 with 90 catches for 1,374 yards and 9 TDs. Now he's going to get his chance to see exactly how bright he can shine. Julio Jones is out of town and they've got a young, promising rookie TE in Kyle Pitts to keep full focus off of him. While Matt Ryan may have lost some zip, he's still more than capable of getting the job done and Ridley makes it easy on his QB with route running like this:

Cox is a complete Defensive Tackle. Even though he's going into year 10 in 2021, he's still playing at a very high level. Despite playing from behind a ton in 2020, Cox still had 6.5 sacks. He's also a great run stuffer and offenses simply must account for him because of how disruptive he is.

Something wild I discovered while researching this, this guy's name is Eric-Nathan. As in 'The Dog'. What a world. 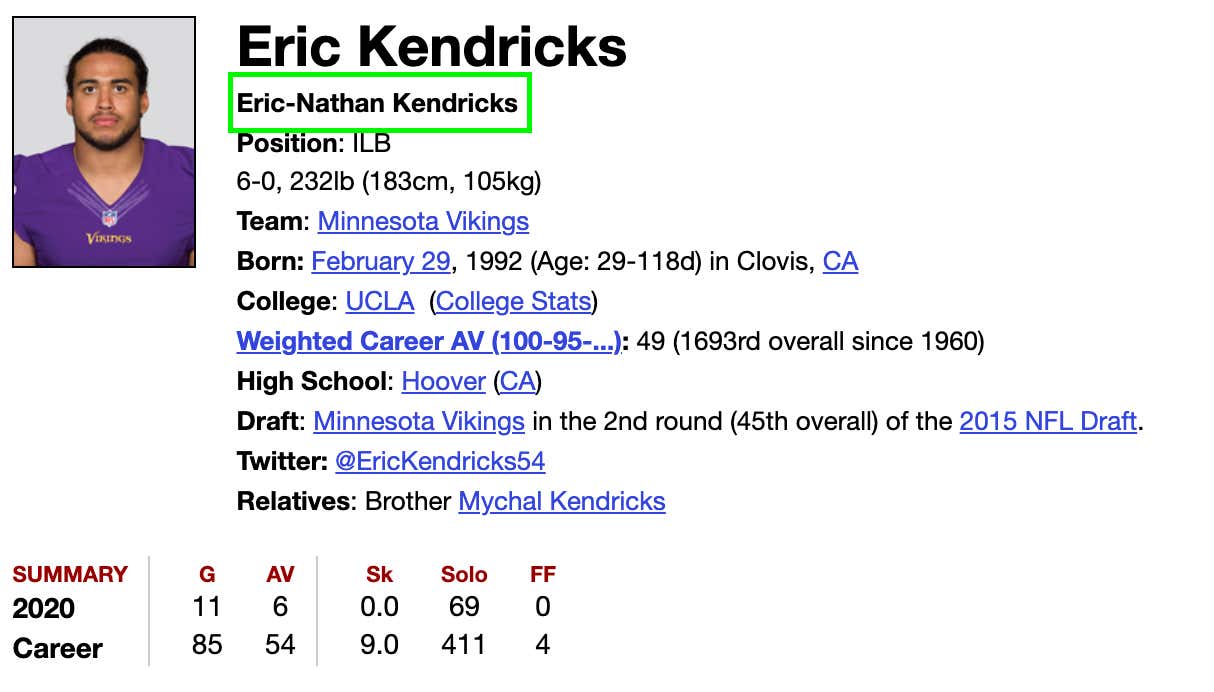 What a world. Anywho, Kendricks is a fantastic coverage LB with impeccable instincts and soft hands. He had 3 INTs in just 11 games and was forced to miss the final five games of the season after a freak calf injury he suffered in warmups vs. Jacksonville. But despite that, he was only six tackles behind his career-high finishing with 107 total tackles. He's a modern LB and should be fully healthy going into the season. I mean watch this athleticism:

Calvin Johnson gets a ton of hype for just being a freak of nature at the Wide Receiver position, but Evans is the same size but 8 lbs. lighter. At 6'5" 231 lbs. he's got the size to out-jump and out-muscle guys on deep balls. He also can break tackles or drag guys across the goalline like he does here:

But Evans is a likely Hall of Famer after breaking Randy Moss' record with his 7th consecutive 1,000+ yard season to start his career. Owner of a Super Bowl Ring, his resume has now been enhanced and he's still playing at an elite level. He had a career-high 13 TDs in the regular season and added another 2 TDs in the playoffs.

Fitzpatrick was traded in-season to Pittsburgh in mid-season last year and was a candidate for Defensive Player of the Year. He has a knack for being around the ball and made his 2nd straight Pro Bowl along with being named 1st Team All-Pro for the second consecutive year. Fitzpatrick is a winner with a savvy that's matched by very few of his peers.

Zack Martin has been a dominating force at Right Guard for the Cowboys since he was drafted in 2014. He did miss the Pro Bowl for the first time in seven seasons in 2020. But I'm actually betting on Martin, along with the Cowboys offense to have a big bounce back this season. He was limited to only 10 games in 2020, but a fully healthy Martin will mean big things for Dak Prescott and especially Zeke Elliott in 2021.

With all the injuries across the Cowboys OL this past season, Martin even had to shift out to play some Right Tackle at times. And as you may expect, he looked awesome doing that too.

Since coming over from Baltimore in Free Agency in 2019, Za'Darious Smith has been worth every penny. He's coming off a 12.5 sack year and his second straight Pro Bowl appearance. Smith is slippery off the edge, but can move Offensive Lineman with a powerful bull rush if you sit on his speed rush.

The winner of the ultra prestigious Block of the Year Award in 2019 had another banner year in 2020 making his 3rd consecutive Pro Bowl and 1st Team All-Pro. He's a punishing Left Guard that is a truck in the run game and nimble enough to block two guys when needed in pass pro.

Brown burst onto the scene in 2019 with 52 catches for 1.051 yards and 8 TDs as a rookie. In 2020 Brown topped that despite missing two games with 70 catches for 1,075 yards and 12 TDs. It seemed like every time the Titans needed a big play in 2020, Brown would come up with a huge play. He did see his drops go up from 2 => 5 this past season, but outside of that, it's pretty hard to find any holes in his game. He's terrific on 50/50 balls, a legit deep threat, and one of the best YAC guys in the league. I'm expecting a much bigger 2021 from this superstar Receiver.