Barstool Vs. America wrapped up last night with an incredibly entertaining and drama filled season finale. If you haven't caught up yet, stop reading this recap obviously and go binge watch the entire series right now. But for those of you that have watched, let's get into the action.

With Marty now swapped from the blue team to yellow team, Pat lets us know that he's done with the three-headed dragon of himself, Dana, and Marty. Pat says he's now just a one-headed dragon, a harbinger of things to come this episode as people would start to play more strategically and selfishly. We then see a montage of the haves and have nots. The yellow team of Marty, Spider, Kayce, and Kelly had a lovely time flying from Chicago to New Jersey while enjoying the AirBnB, a limo, and playing some games on the boardwalk. The blue team of Glenny, Pat, Dana, and Vibbs, meanwhile, was miserable on their 16 hour RV ride. Balls woke up with a sore neck from eating pu sleeping on the couch wrong.

It's then time for the final impromptu captain challenges, as Jeff D Lowe woke up everybody on the RVs and let them know they'd be staying on their buses for the challenge. And what was this last challenge? Trivia of course. 10 questions on things that happened during the road trip.

First up is the blue team, where Vibbs won fairly easily. Considering Balls and Dana were two of his three opponents, I don't think this came as a surprise to many. There was talk that Vibbs was considering throwing the captain challenge, but he didn't feel confident enough in his deals with the yellow team to go through with it. Over on the yellow bus, it was a two horse race between Kelly and .... Marty? Mush, a moron, was somehow able to remember many different things about the trip. I was impressed. It was a sign of things to come this episode, as he proved that he does indeed have a brain. But for now, the power couple of Kelly and Vibbs were captains for their respective teams. The person set up best for this was Pat, who was aligned well with both. Vibbs said he would keep Pat if blue wins, and Kelly said she would take Pat if yellow wins. The strategy talk was really heating up. There was talk of shifting captains, throwing challenges, adding and removing players, it was chaos. But I like chaos.

Dana then began his exhibition of being the dumbest human being in reality show history. It started by opening talking about his Big 3 alliance with Pat and Marty. The problem? Kayce was sitting literally right there. It's like telling someone at tribal council that they're getting voted out.

But the idiocy didn't end there. In the parking lot, Dana started to say that he doesn't give a fuck about Pat and only cared Marty. He'd rather take Glenny than Pat. The problem this time? Pat was sitting in the RV with the window open and heard everything. After hearing that, Pat said he was now set on fucking over Dana.

Our next topic of conversation was if Glenny Balls is the richest man on Earth. I have said before that Balls will legitimately be a millionaire one day, and that is not a joke. He's been full-time for four years, doesn't pay rent, wins free roll bets, and has minimal expenses. Balls Beachwear is probably going to take off and he'll end up being as rich as Dave. So there was some discussion of Glenny "not needing the money" even though Balls insisted he's not exactly Jeff Bezos. But Balls wasn't in this for the money. He's in it for the beach house. And nobody wanted to be the one to take away Glenny's lifelong dream, so he was set up pretty well.

The yellow bus had a very open discussion about who should be the captain. Marty said it made the most sense for him to be captain, both selfishly and for the team. His best chance of winning was being the captain, winning the challenge, and taking Dana. Vibbs would then have to kick off either Spider, Kayce, or Kelly from the winning team. Kelly figured that Vibbs wouldn't kick her off if this was the case (due to their sex having) so it did make sense for her to give it up. Plus, if the blue team won, she figured there was a chance Vibbs would add her to the winning team or Marty would give her over to the winning team. So Marty being captain made the most sense for everyone, and that's what they decided to do.

The yellow team could set themselves up even better and essentially guarantee victory by having Dana throw the challenge for the blue team. Marty guaranteed Dana that if yellow won, he'd pick Dana to join the yellow team. This would mean that Marty and Dana were guaranteed wins. Then one of Spider, Kelly, or Kayce would be removed by Vibbs, but if you're one of those three you'd have to figure that you have a 67% chance of staying on the team. So Dana throwing the challenge made sense for really 5 people. Meanwhile, Vibbs, Pat, and Glenny could only win if the blue team won. Because if they lost, they knew Marty would take Dana. So heading into the challenge, it seemed like Dana throwing the challenge was going to happen and it clearly made the most sense.

As for that final challenge, it was awesome. It was a combination of all their challenges so far. It started with a maze, then the slippery slide, then the ball pit, then a puzzle, then raising a flag.

Vibbs decided to stay the captain for blue, while Marty became captain for yellow. The catch was that the other three team members had to go through the course first, and then once they were done the captains would go. But before the challenge could start, Dana once again pissed himself for no apparent reason.

Onto the challenge. After getting through the maze and slide, Balls and Spider were in the ball pit first looking for frisbees. This led to the funniest moment of the series, and one of the funniest things I've seen in quite some time. 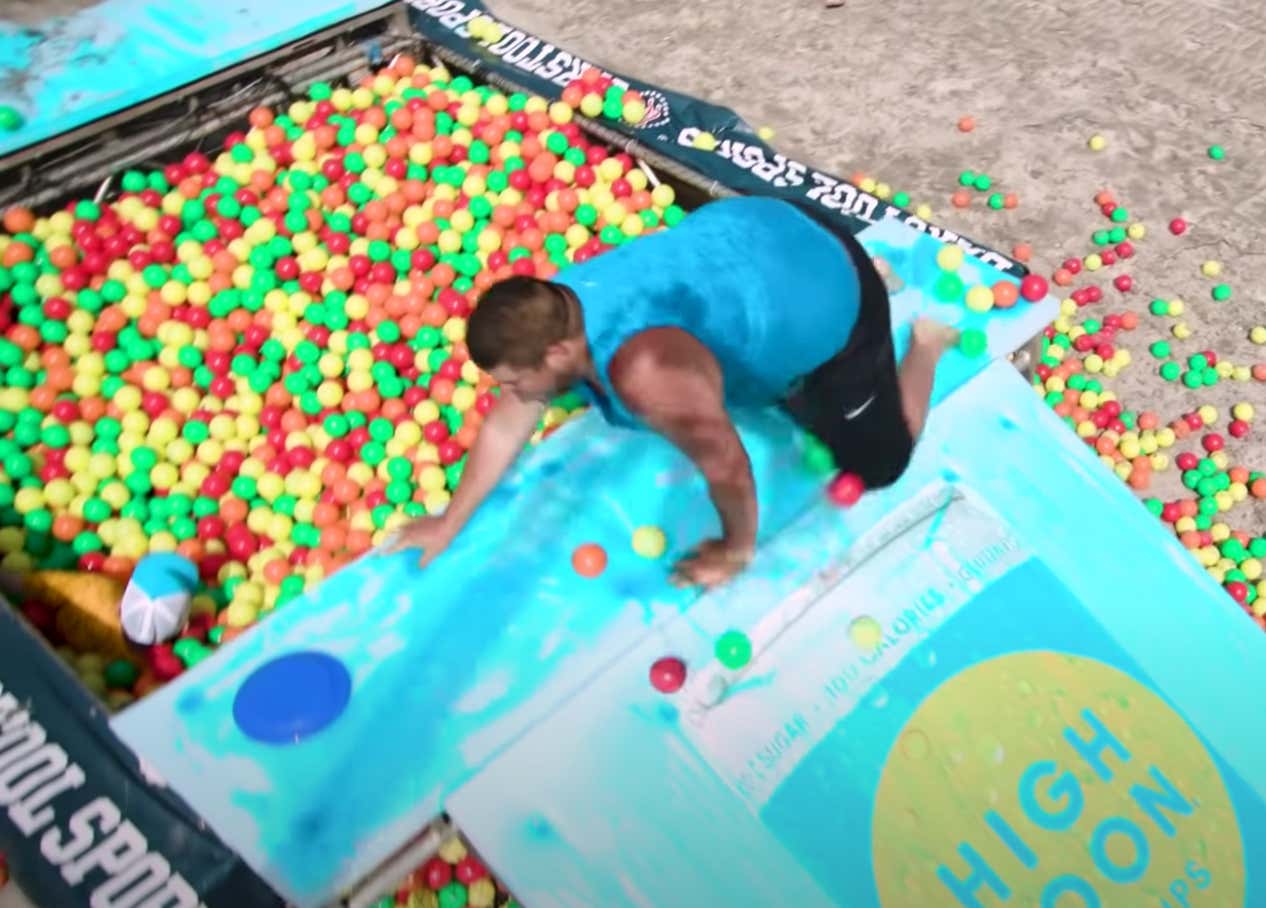 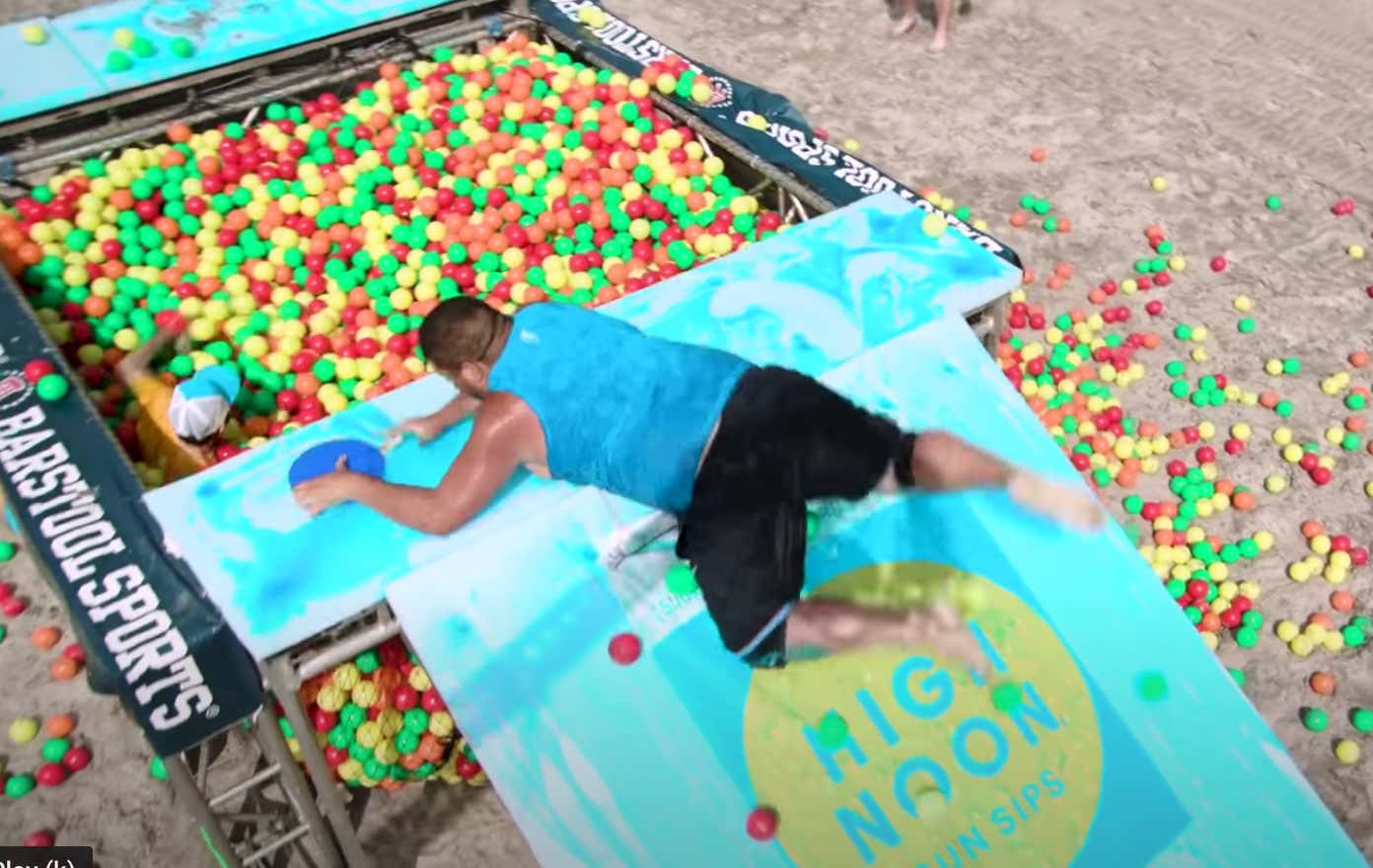 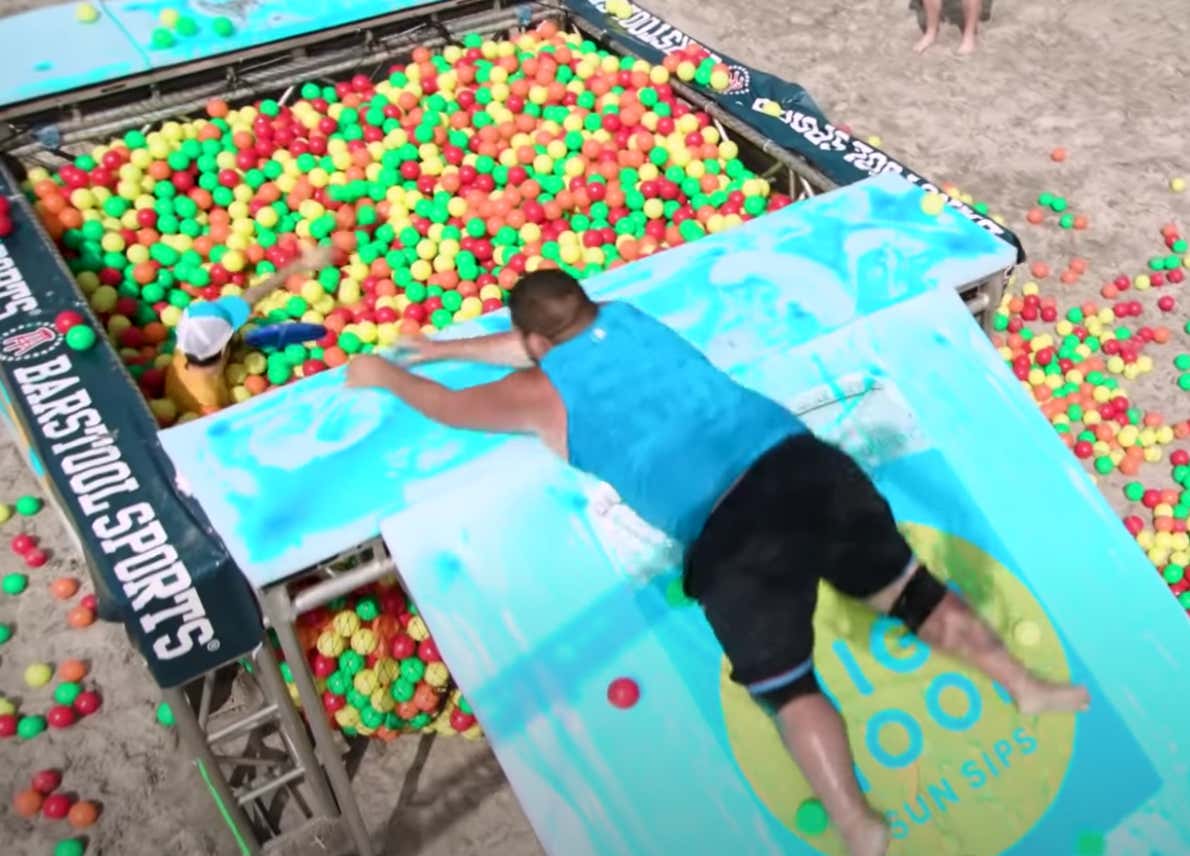 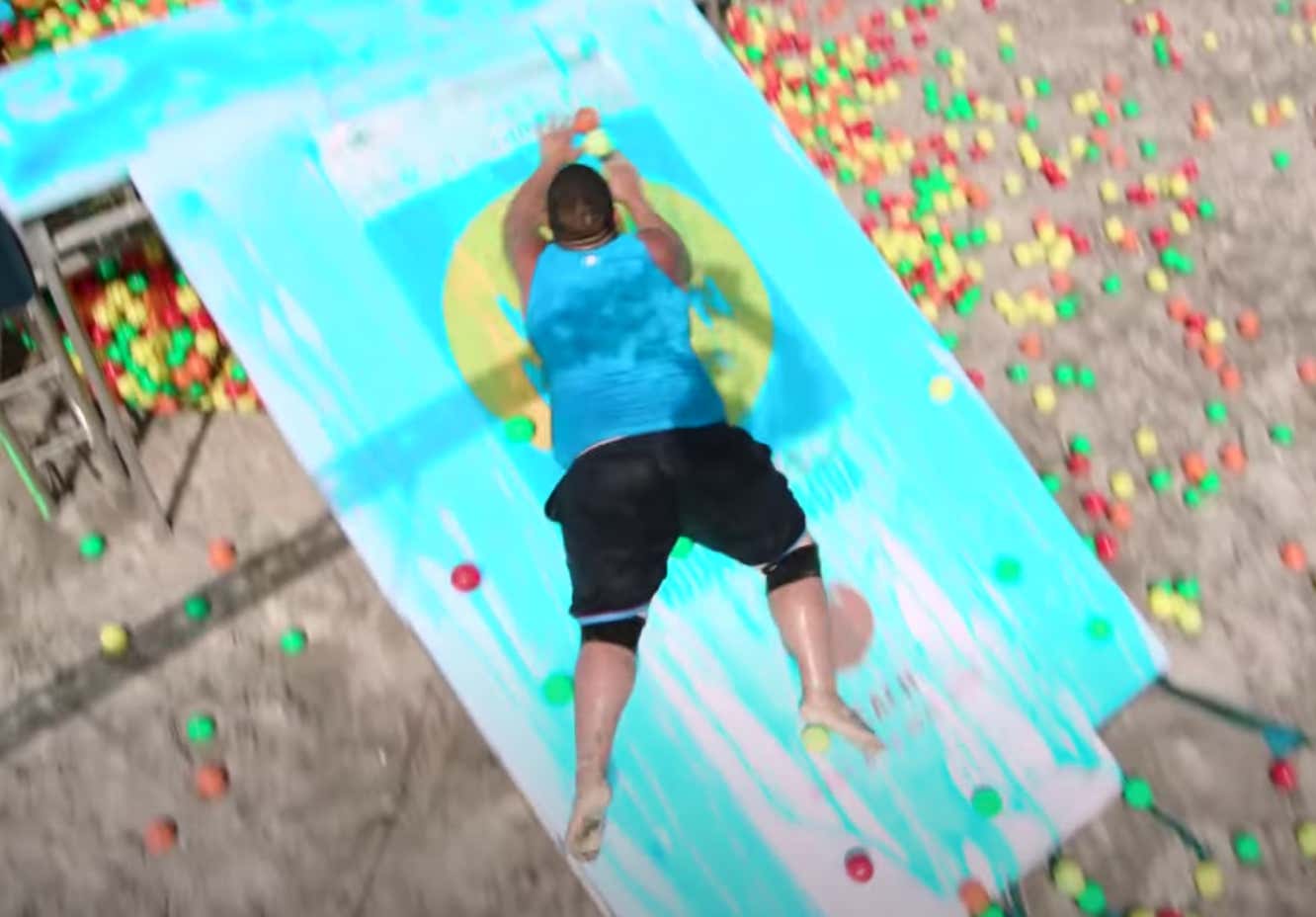 Anyway, finding the frisbees was proving to be difficult and taking awhile for everyone …. except for the one person supposed to be throwing the challenge, Dana B. Dana found his frisbee in record time, confusing everyone (himself included) who thought he was throwing the challenge. It was an incredibly easy way to take a long time and pretend he couldn't find it. But Dana is one of a kind.

Thanks in part to that, the blue team was out to a big lead and had a huge head start on their puzzle. Vibbs was working on it as Pat, Glenny, and Dana yelled clues at him. Now it's important to note that if any teammate besides Vibbs touched the puzzle, they'd have to restart the entire obstacle course. Another AMAZING opportunity for Dana to look like an idiot and "accidentally" touch a puzzle piece.

But he either didn't think of it in the moment, or did and chose not to be an asshole. Either way, blue was first to finish their puzzle and then after some slight difficulties, raised their flag first to win the challenge. 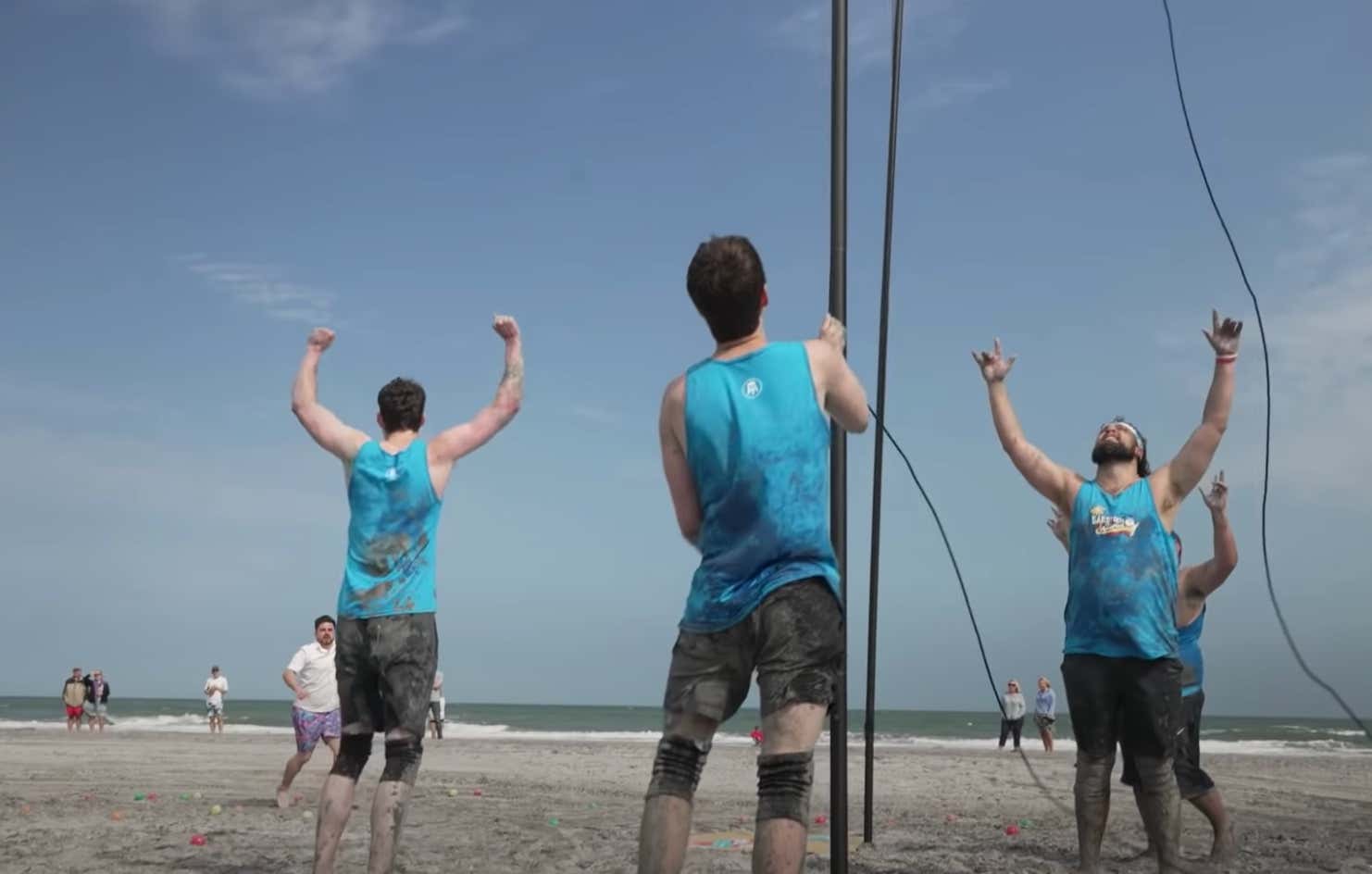 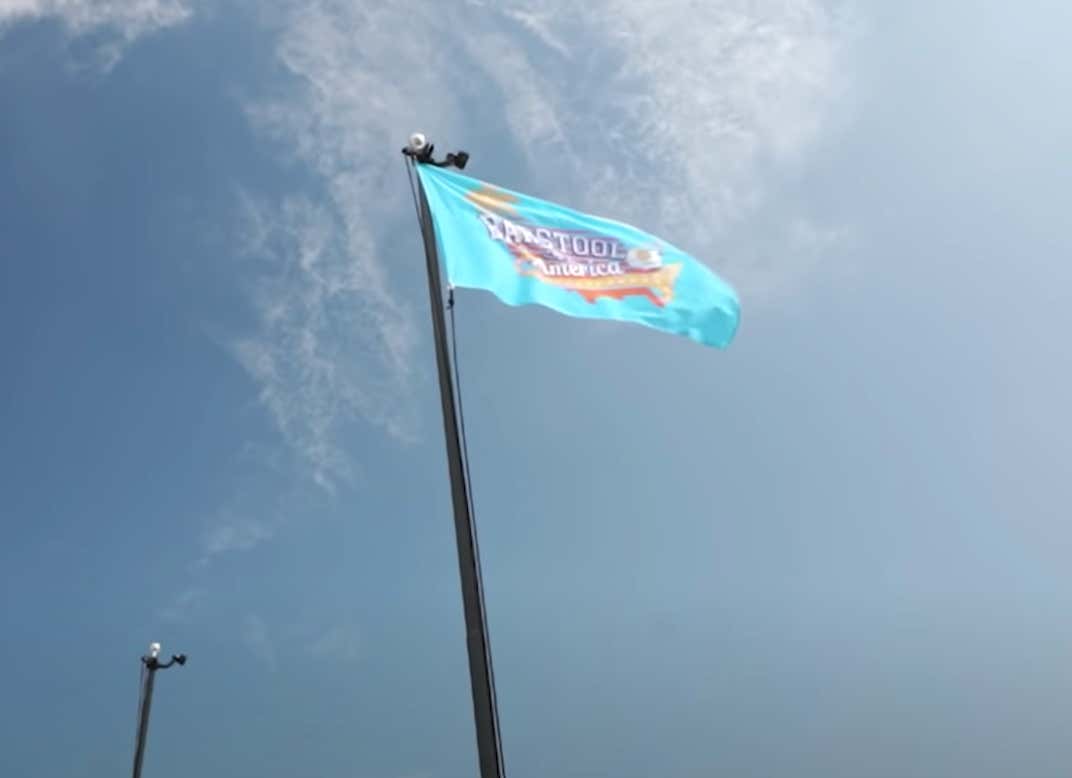 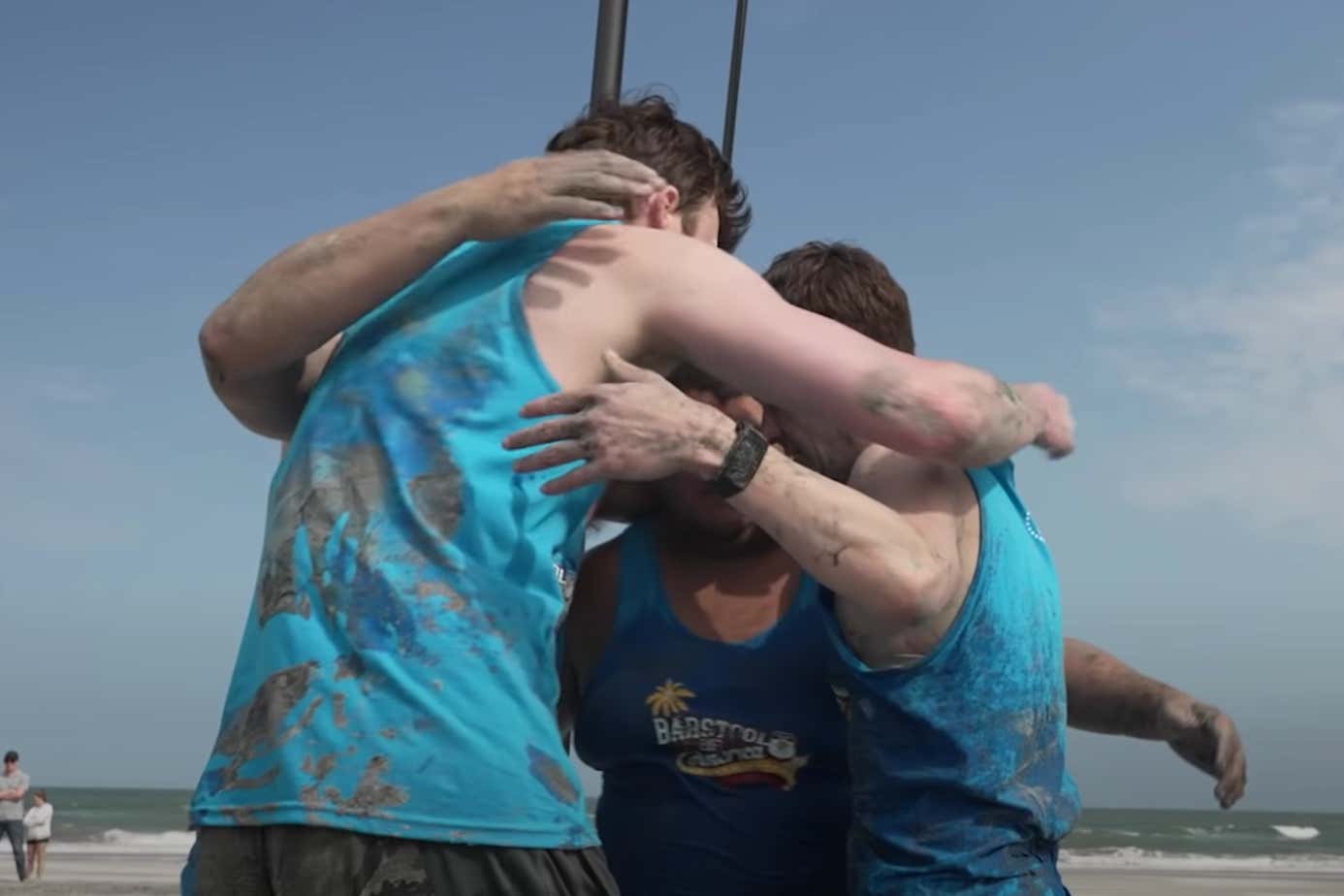 They celebrated the victory, but couldn't celebrate too much. One of them was about to lose out on the prize, and Vibbs had a tough decision to make.

The eight contestants sat around with Jeff D Lowe in the middle. It was decision time. 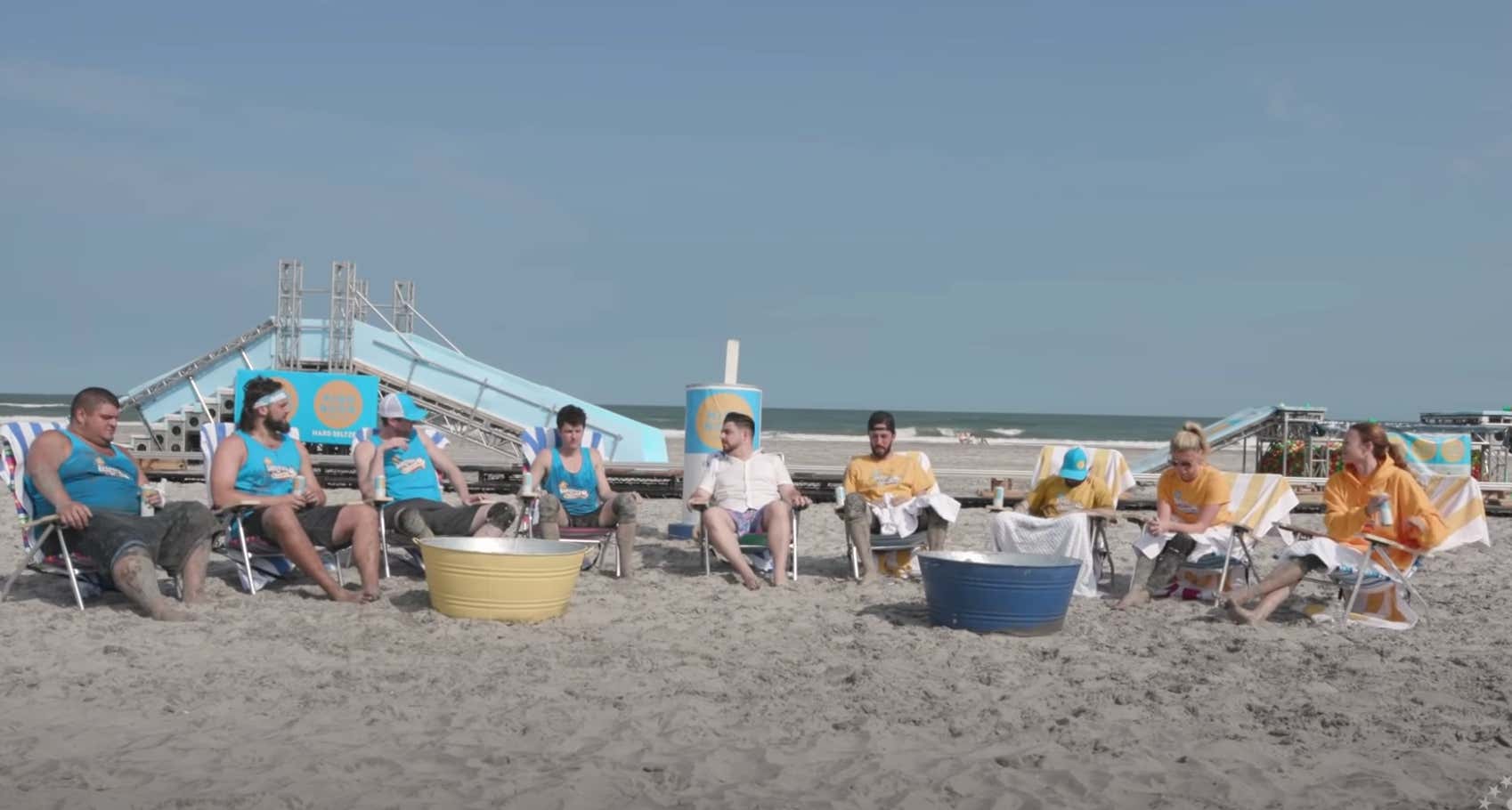 Vibbs had to decide if he was going to remove someone from the blue team or add someone from the yellow team. Marty would have to do the opposite of whatever Vibbs chose to do. Ultimately, Vibbs decided he'd be removing someone from his team, while Marty would then have to pick someone from his team to win the money and house. It was a surprising move. Instead of being the good guy and handing someone $10,000, Vibbs basically decided to instead be the villain and take $10,000 from someone. Ultimately, I do understand his decision but we'll get to that in a second.

-Balls just had a good time and wanted a beach house. He also gave Vibbs that sandwich

-Dana went hard all game and once donated 100K to charity

-Pat said he had an alliance with Vibbs on Day 1 where they promised to not screw each other over in the end if they were in this position.

Everyone then whined and cried about Pat being a snake and making too many alliances. Hey morons, that's the whole point of the fucking game. "Wah wah wah!!! Pat played too hard! He played too well!" That's exactly what you're supposed to do in a reality competition show. The fact that some people still can't comprehend that is baffling to me. (And yes this hits close to home). Pat played the best social/strategic game out there and very much deserved to win.

Over on the yellow side, they made their cases too for why Marty should pick them.

-Spider was loyal and a ruthless competitor.

Not exactly a compelling pitch from anyone.

At the end of the day, Vibbs decided to remove Dana from his team, while Marty handed Kelly the prize.

I understand both decisions. While Vibbs ends up looking like the bad guy, he ultimately wanted to stay true to his alliance with Pat. He knew that if he added someone from yellow (likely Keegs), then Marty would've probably screwed over Pat before screwing over his pals Dana and Glenny. So Vibbs stayed true to his word with Pat, screwed over Dana who he had bad blood with earlier in the game, and his girl Kelly still got the money, which he might've figured would be Marty's decision. Marty likely decided to give it to Kelly over Kayce and Spider out of just who needed the money most, and Kelly has worked hard on two different reality shows this year. So at the end of the day, Vibbs said it best: "I got the cash, I got the house, and I got the girl." What a moment.

This led to some serious tension and bad blood between Vibbs and Dana that has still carried over to present day.

Nothing gets me harder than genuine bad blood between Barstool employees. And that's exactly what we have here.

But hey at the end of the day, everyone sort of comes out a winner.

-Vibbs got the cash, the house, and the girl.

-Glenny, thanks to a $10,000 sandwich, lives out his dream of having a shore house

-Kelly gets emotional after winning that $10,000 and she also found some romance

-Kayce drank some High Noons and made no enemies

-Dana B is fully back and got two blow jobs

Shoutout also to Jeff D Lowe for doing an incredible hosting job. If Jeff Probst ever retires from Survivor, we may have found a replacement. Also credit to Logan, MB, Nick, Kelsey, etc. for putting everything together. All the production people, editors, etc. did an amazing job making it feel like a legitimate reality show.

I was slightly skeptical at first of how well the show would work because I didn't know if there'd be enough strategy. But there proved to be plenty. Plus plenty of drama, romance, funny moments, and amazing challenges. Barstool has now made two of our own reality shows this year and crushed them both. The possibilities are endless for what this company can do. We now wait for Surviving Barstool Season 2.