Four episodes down. One to go.

The penultimate episode of Barstool vs. America aired last night, and it was probably the most jam-packed one yet. We started off the episode with one of the major storylines of the show: Glenny's nude body. 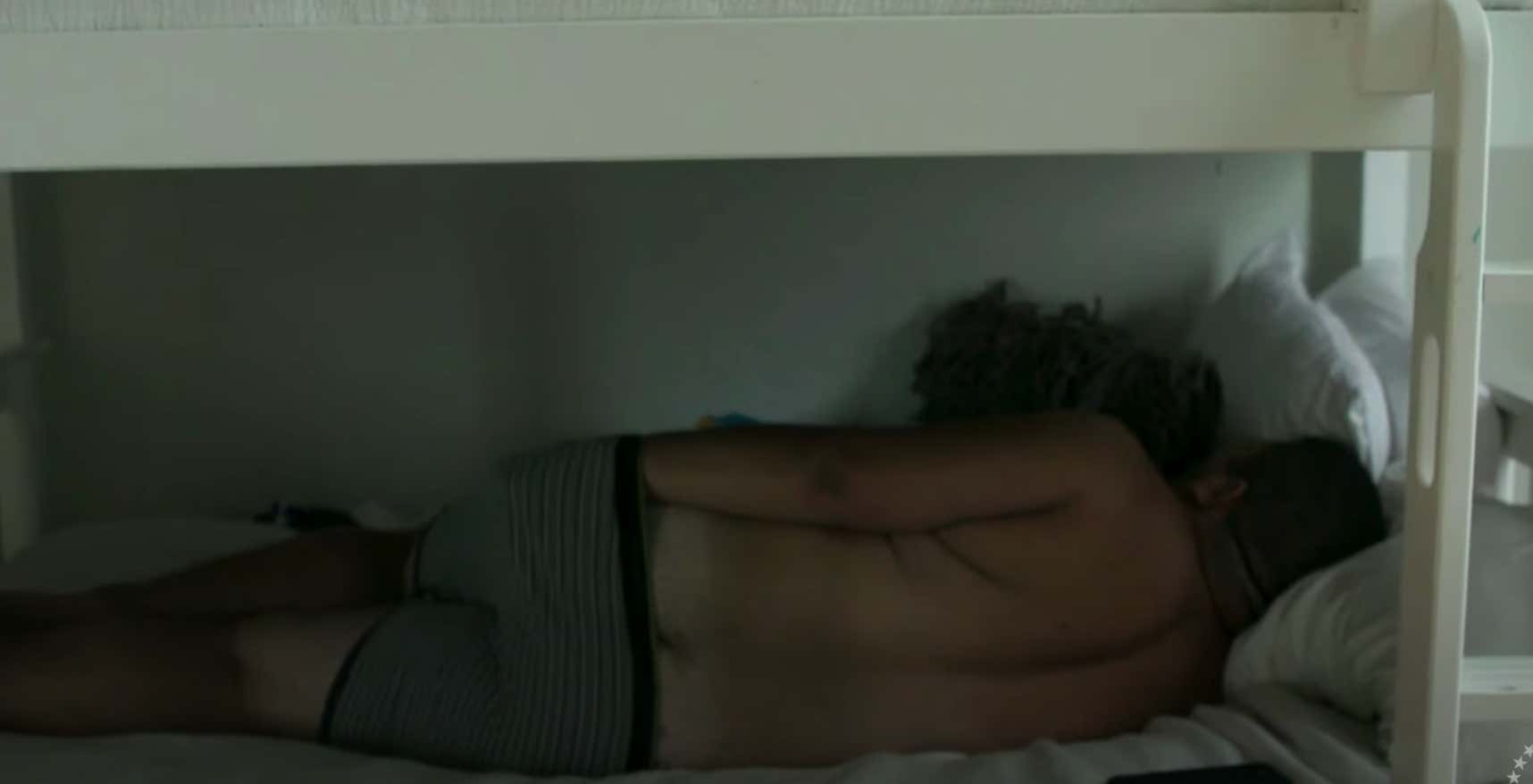 Glenny took a lot of slander from his teammates this episode, and it started early. The Big 3 of Pat, Dana, and Marty kept talking about how they couldn't be beat in any physical challenges, and they just needed to make sure Balls didn't win captain or else they'd be screwed. They were definitely getting the edit of overconfident villains. You can't treat people with disrespect and make enemies in a game like this, and they were getting awfully close to disrespecting Glenny. Glenny had a great Survivor drop when he said Marty was walking around like he's Boston Rob.

In addition to all this strategy, we had Balls spewing some Mary Todd Lincoln trivia to his moron teammates. 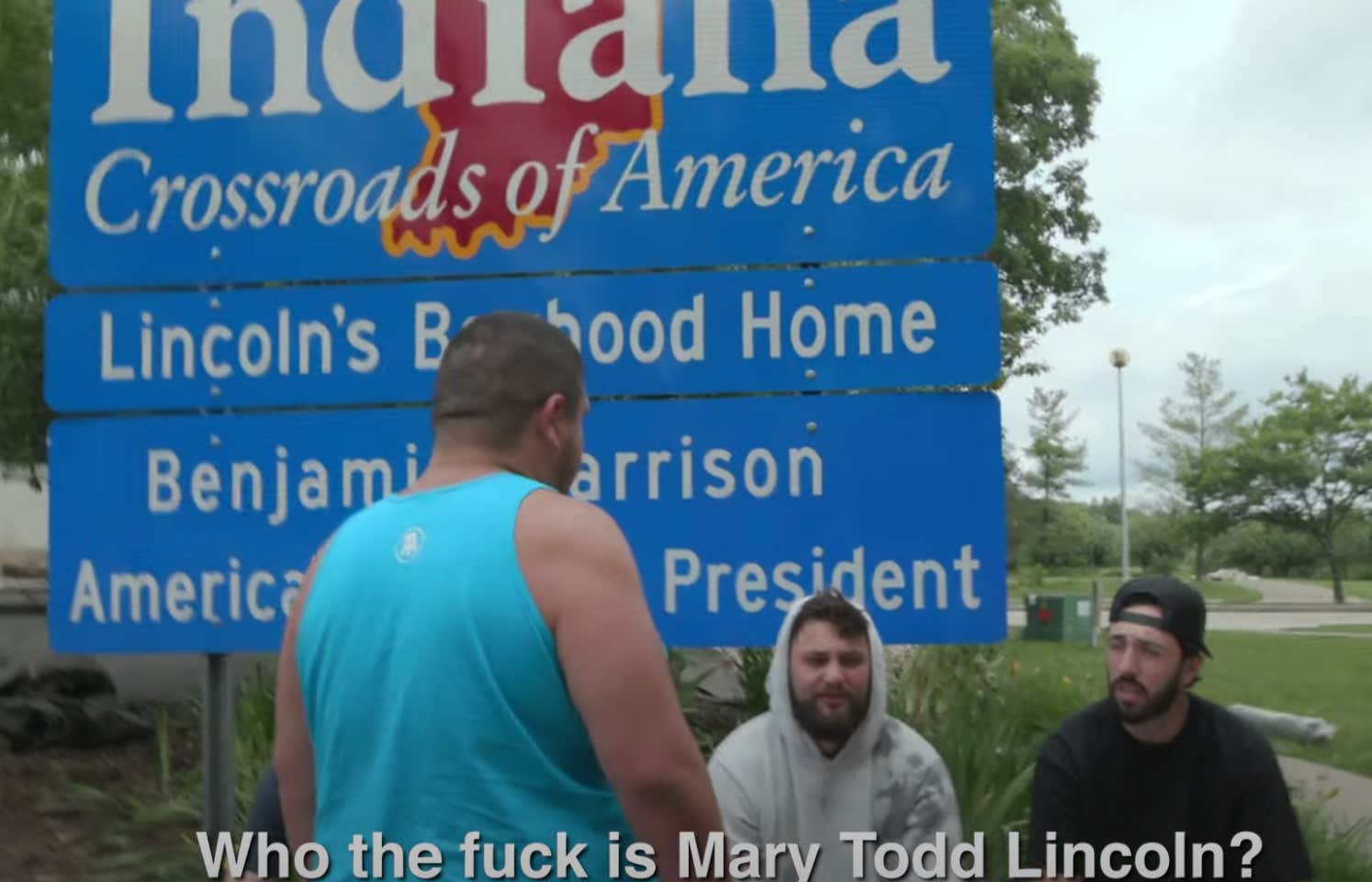 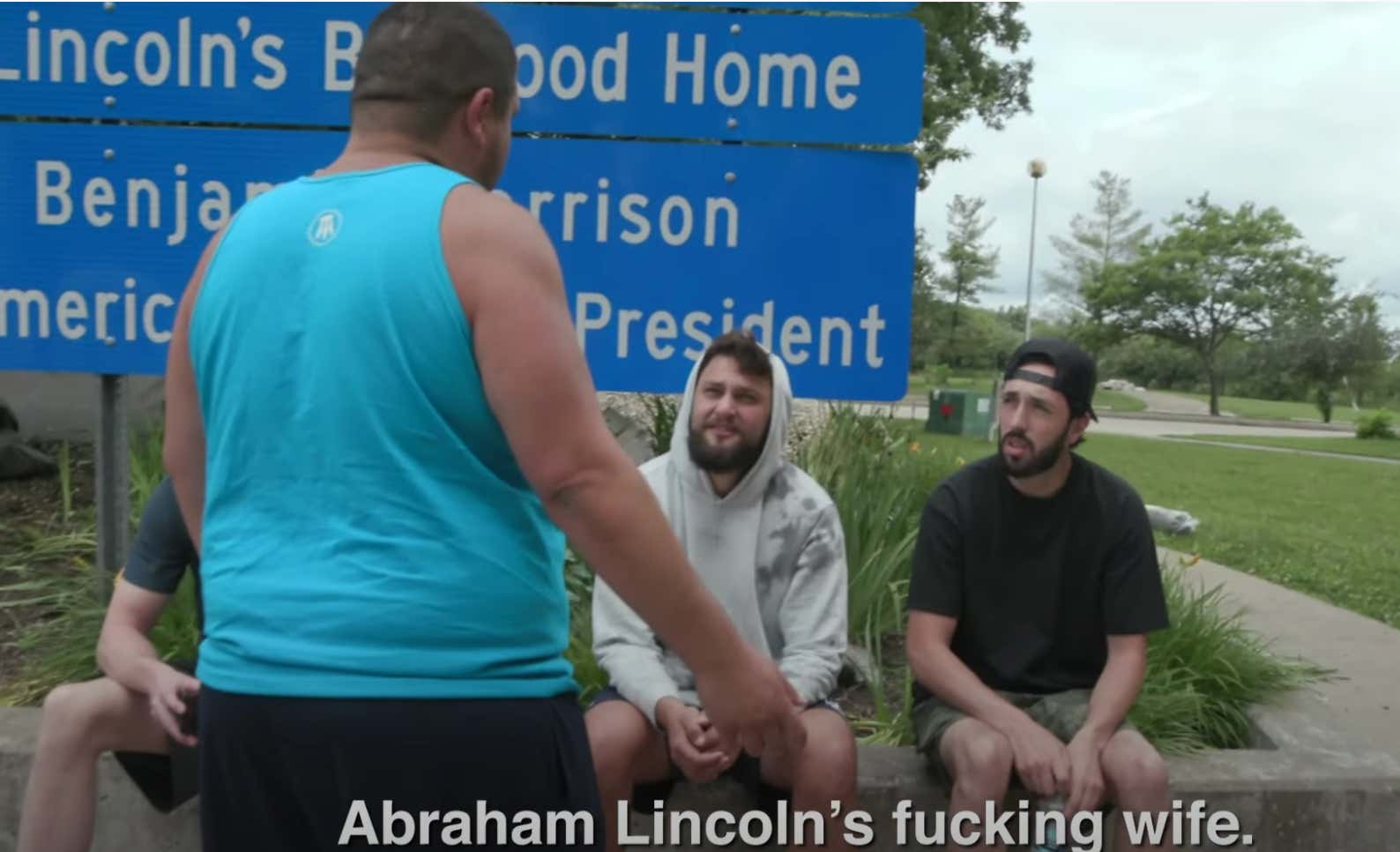 On the yellow RV, they stressed the importance of breaking up Marty and Dana. They had been together on the blue bus all show and were dominating challenges. It is pretty funny that people talk about Marty and Dana as if they're world class athletes, but compared to some people in the group, they almost are.

It was onto Chicago for the captain challenge. This time it was bowling. With the first pick, Pat prevented another Balls bonking by stealing the hot girl away from him. The last pick was this weirdo in a hood, mask, and sunglasses. 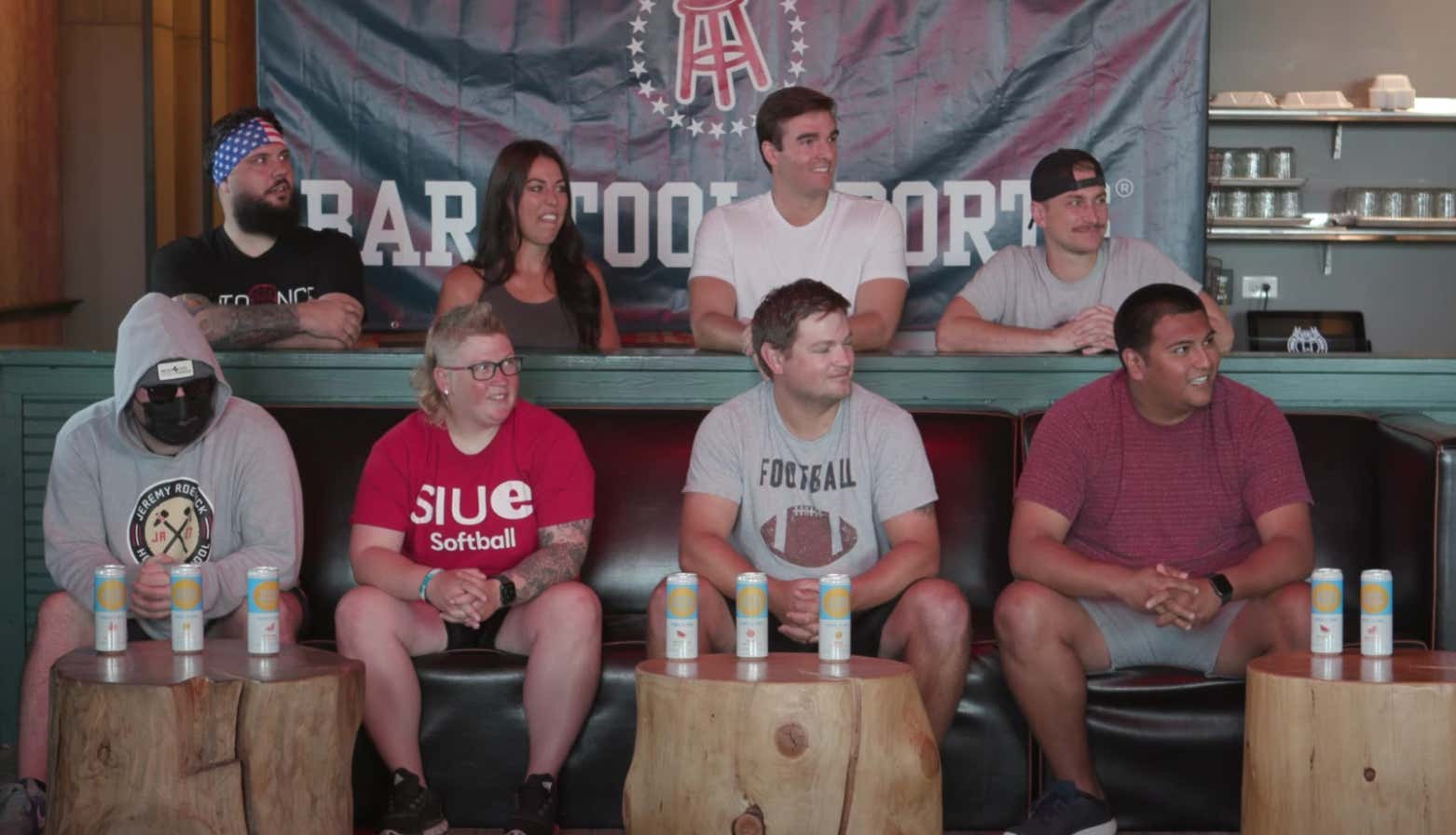 Who could this freak possibly be??? 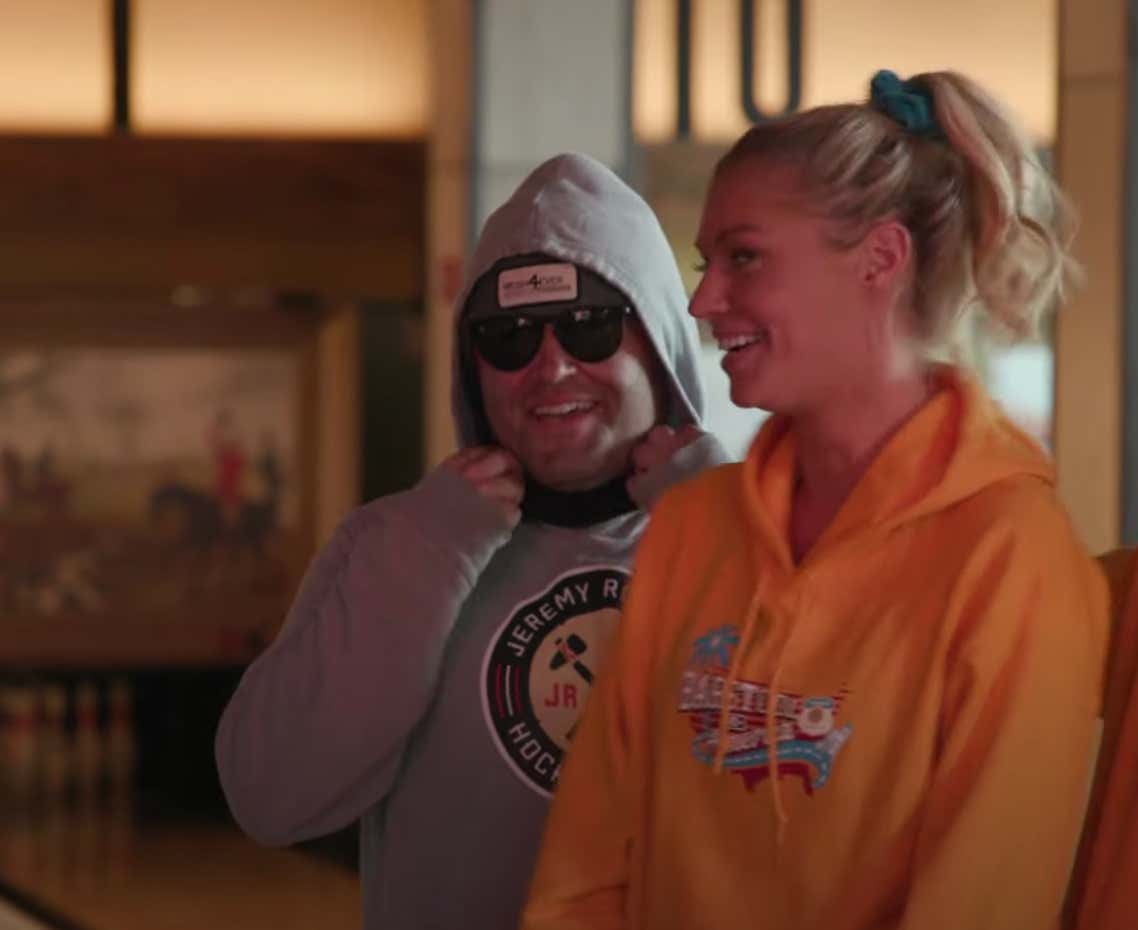 As an elite athlete in all aspects of life, White Sox Dave let us know that he is also a top bowler. There's simply nothing the man can't do.

The blue team was up first and despite Pat having a grandpa in the bowling hall of fame, and Marty and Dana being Olympic level athletes, it was Glenny Balls pulling through with the win. Thanks in part to Marty's partner Jimmy being maybe the worst bowler to ever live. On the yellow side, Kelly Keegs pulled out her first captain challenge win.

With Balls winning, the Big 3's plan was in trouble. With him as the captain, it would be impossible to keep Marty, Dana, and Pat all on the same team. Unless they could convince Glenny to give up the captain role. In return, they promised him that if they win the final challenge, they'd pick him to go on the winning team.

But it would be naive of Balls to believe this. Here was my thinking. Let's say that on the final day, the blue team is Marty, Pat, Dana, and Person X (not Glenny so either Kelly, Spider, or Kayce). If the Big 3's plan works, either Marty, Pat, or Dana would win the last captain challenge and they'd then win the last team challenge. Let's say Dana won the last captain's challenge. This would mean that Dana would have the choice to either remove someone from his winning blue team or add someone from the losing yellow team to get that final prize. But in that spot, Dana would obviously kick off Person X. Assuming the Big 3 alliance of Marty, Pat, and Dana stayed true to each other, the only way to guarantee they all win would be removing the fourth person from their team. If they added Balls, that would leave one of them vulnerable to being removed from the winning squad and missing out on the prize. So while I caI can understand Glenny wanting to give up the captain spot to not make three enemies, he also had to consider everything I said above. Let's see what was going through his head. 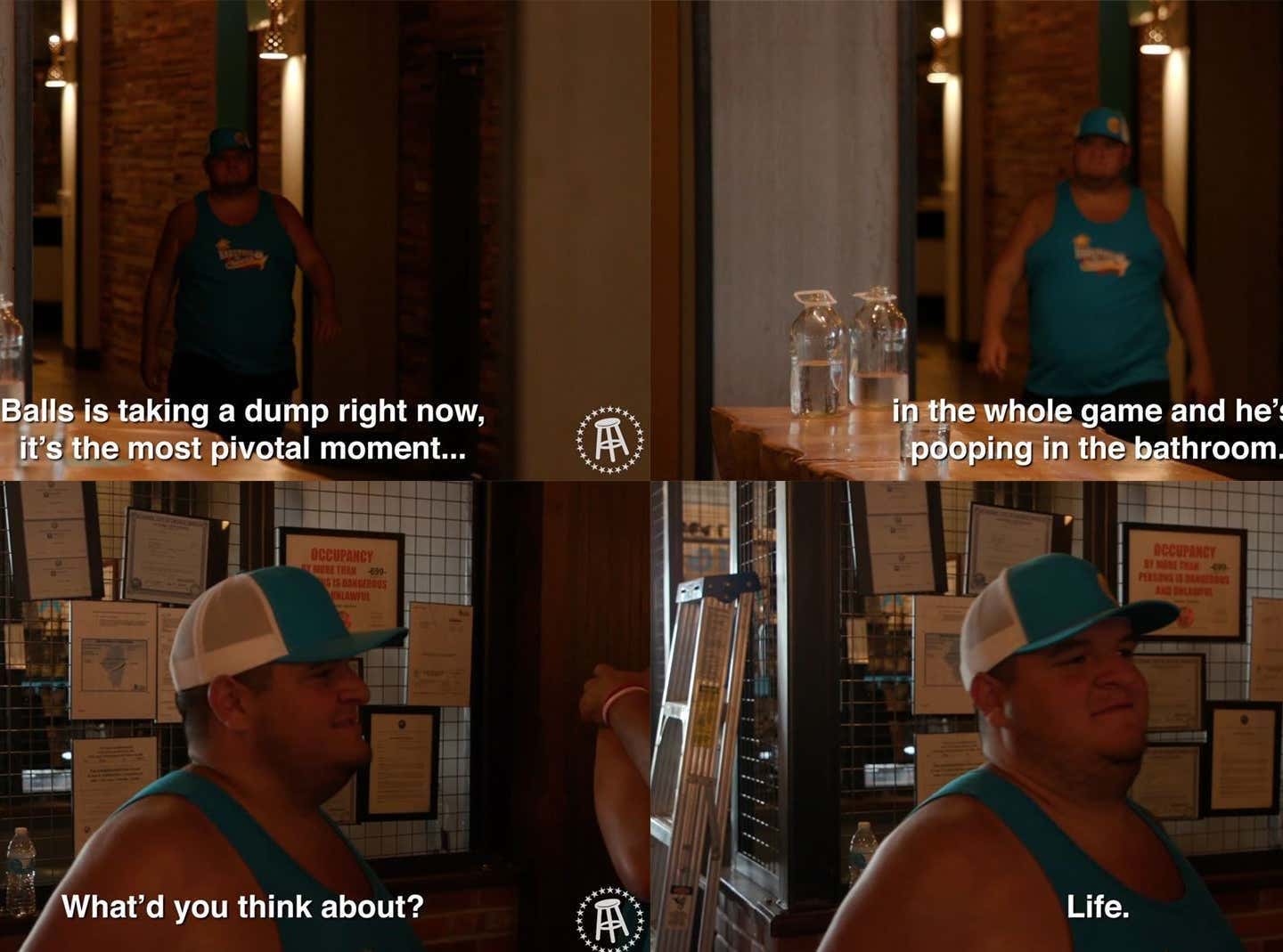 Despite his ill-timed bowels, Glenny was in a power position. Being in a position of power that late in the game is big. For the reasons I said above, I don't think I would have given up the captain role if I was him. Maybe you instead leverage that power into some other kind of deal. Behind the scenes, Pat was saying that they were very much just trying to trick Glenny. Balls was being very wishy washy, leading to a disgruntled Big 3.

But at the end of the day, Balls took the word of the Big 3 and decided to forfeit the captain role to Pat. He said that if they didn't stay true to their word in the end, their friendships were DONE. He also claimed to me today that he didn't realize at the time that the winning team would have the option to remove someone at the end. He thought the winning team just got to pick their four? I don't totally understand what he was saying if we're being honest. Anyway, onto the challenge in Chicago. 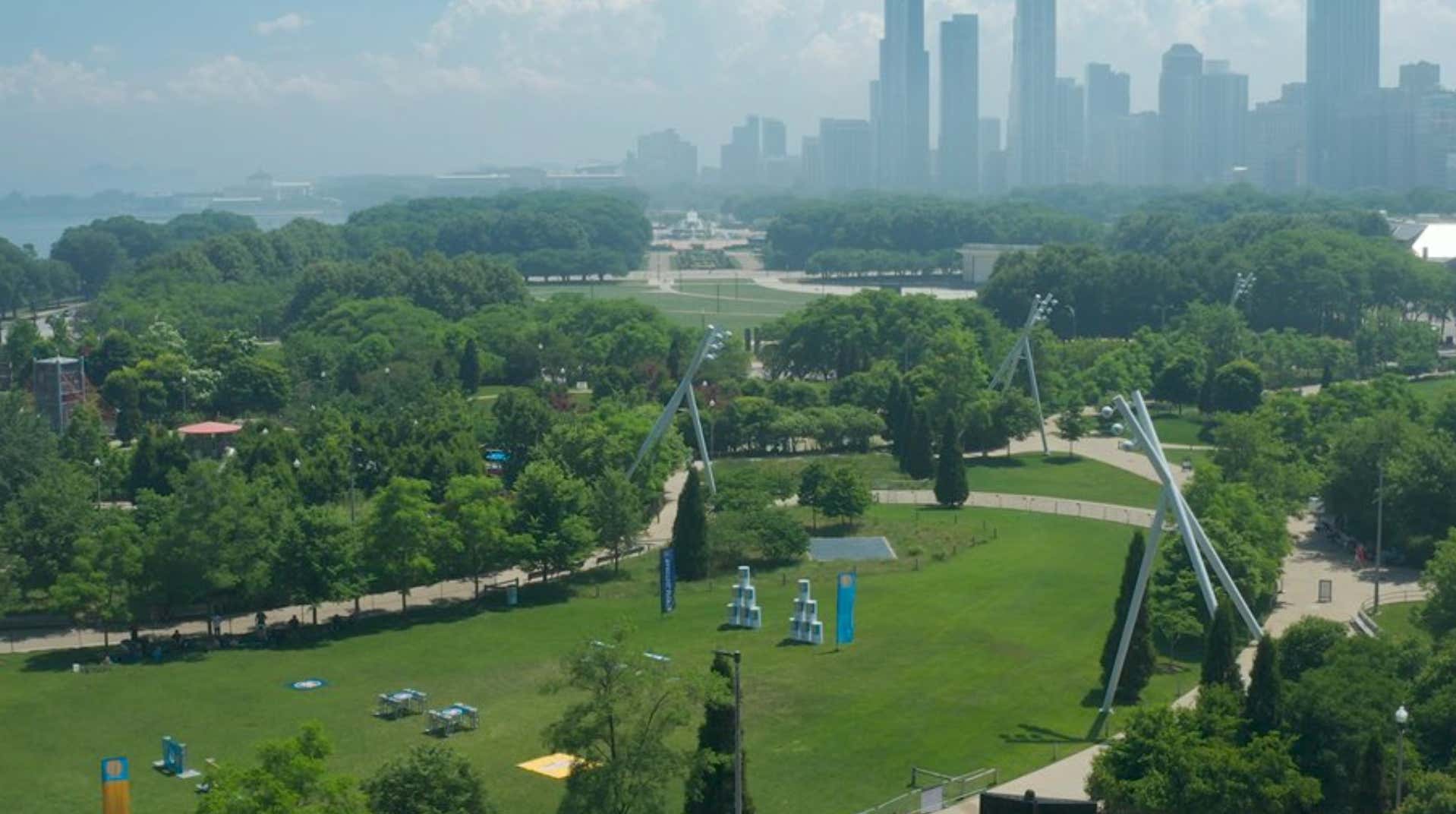 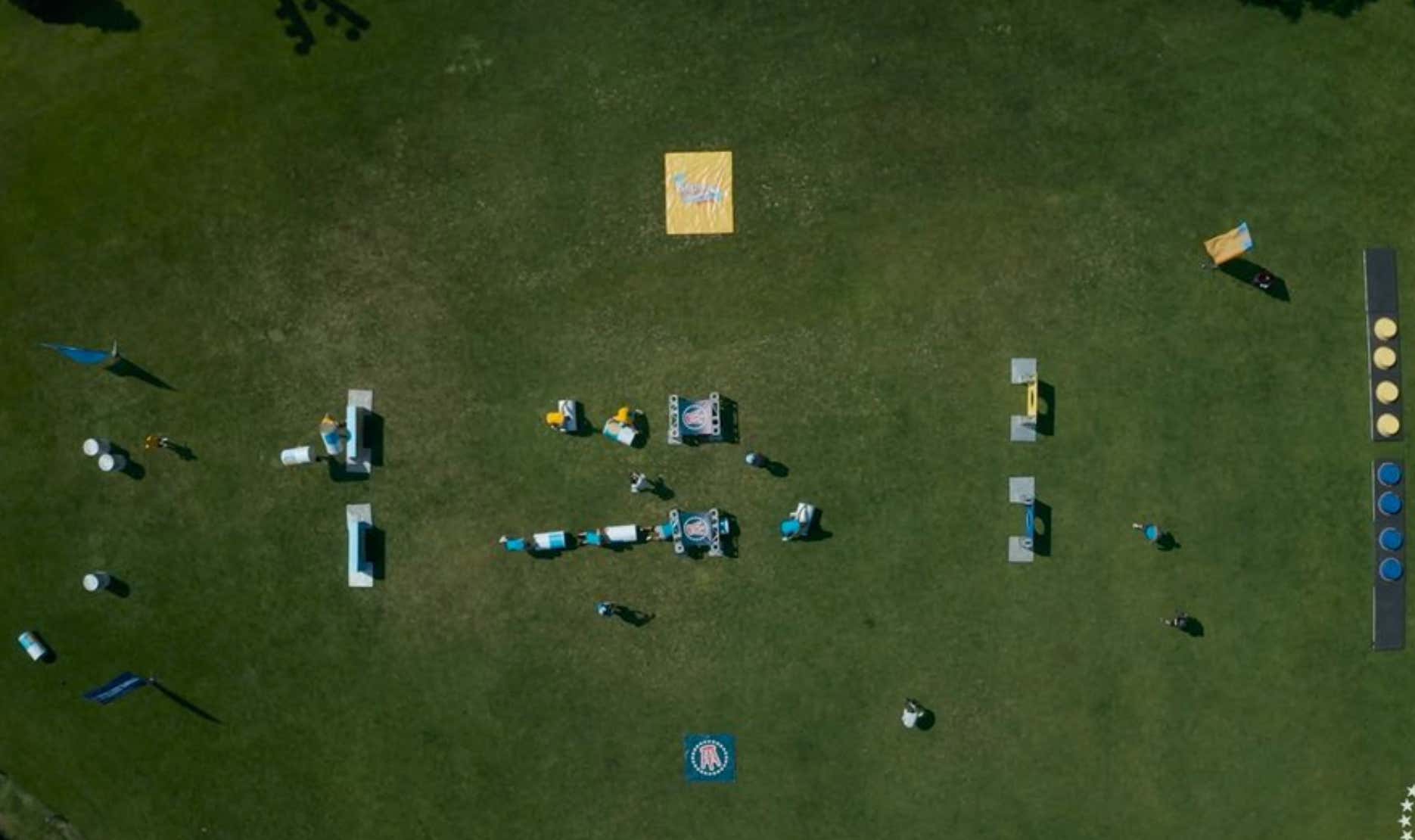 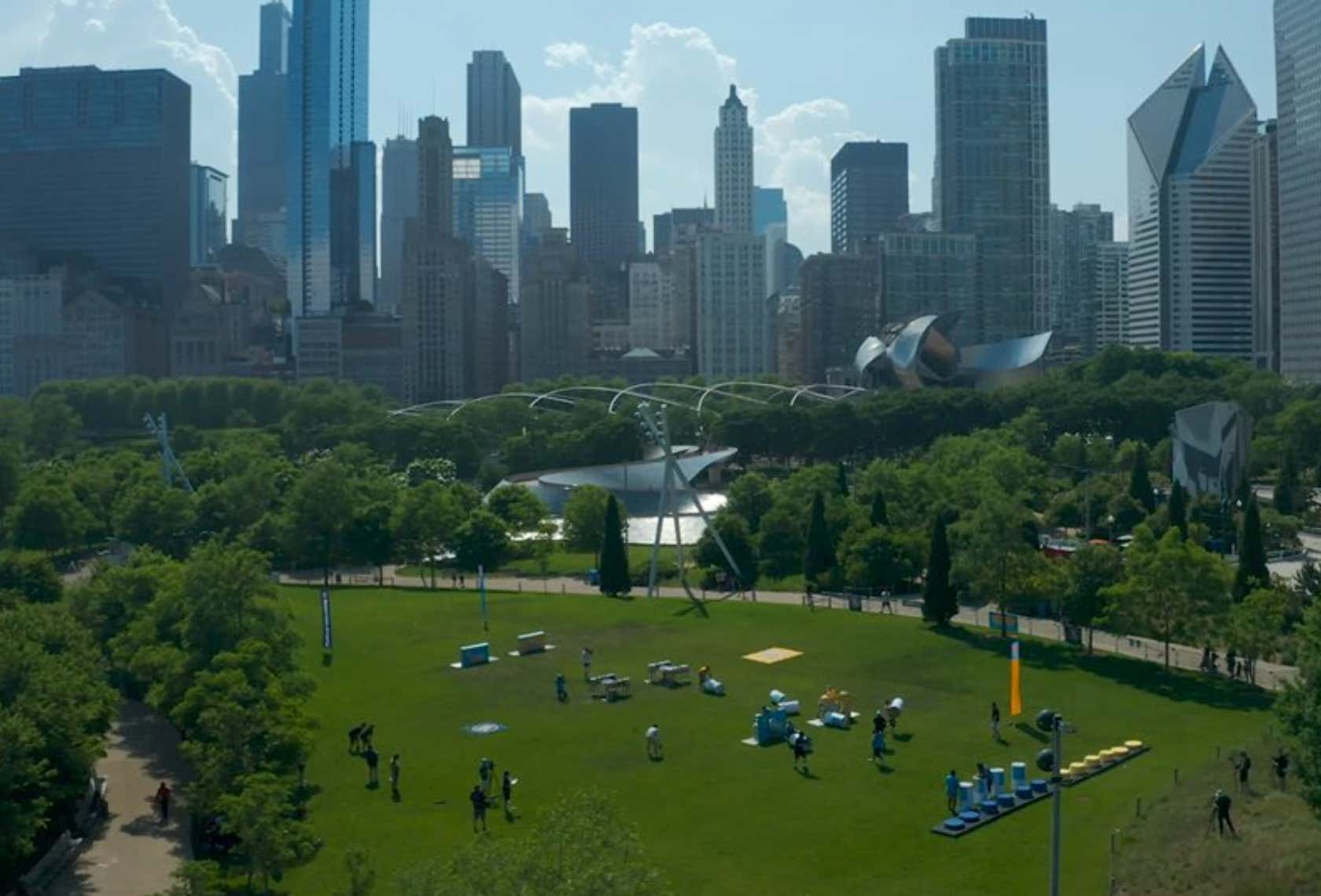 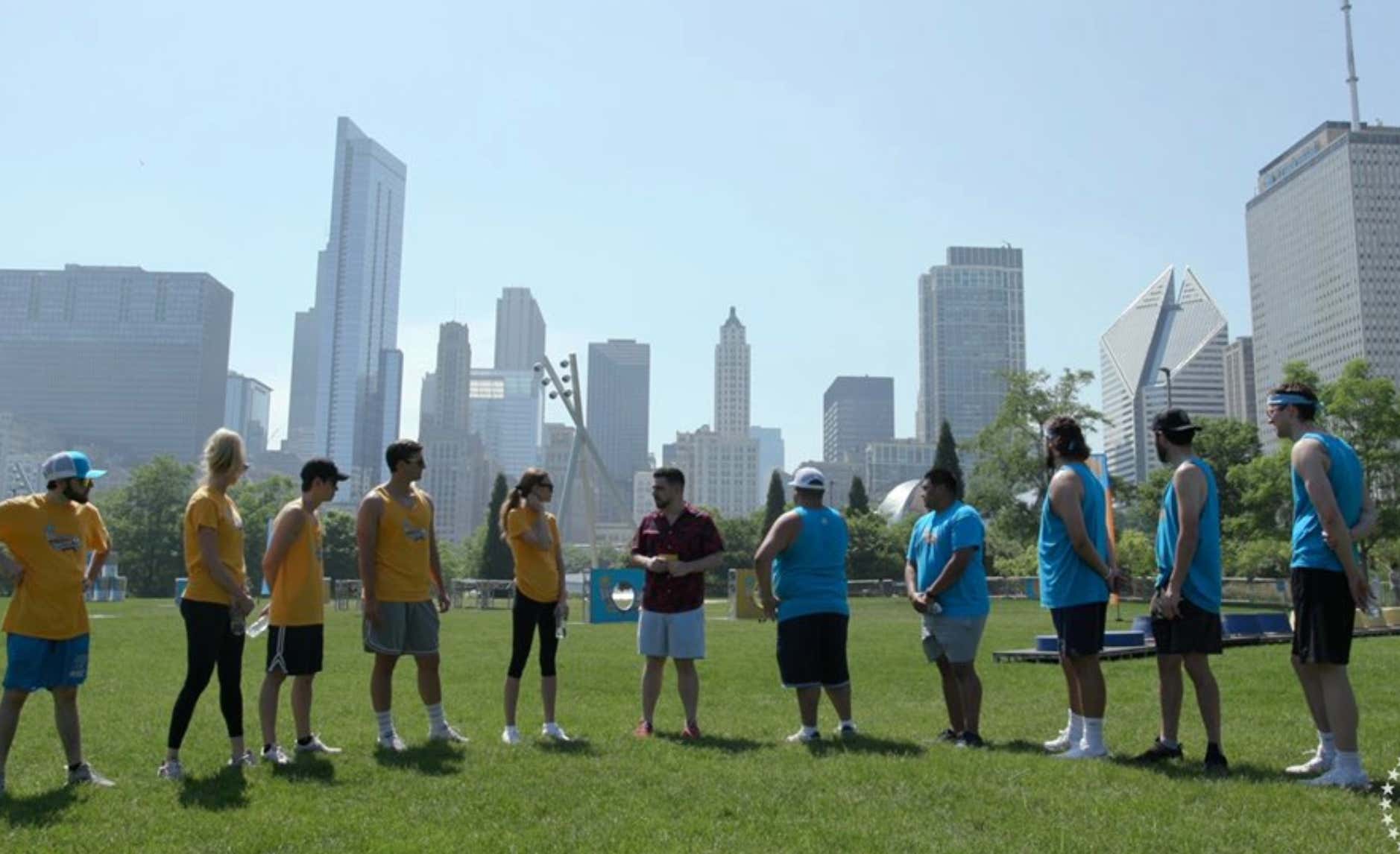 This was probably my favorite challenge yet. Incredibly visually impressive. Loved the set up of the challenge. Good mix of physical and mental. Genuinely felt straight out of Survivor. I will do my best to recap it, but I highly recommend just watching it again. It's worth it.

This challenge had a little bit extra on the line. In addition to the AirBnB, the winning team also got a flight from Chicago to New Jersey instead of sitting on a long bus ride.

For the blue team, Pat was the captain responsible for memorizing the can orders and running the most. Kelly was the captain for yellow. After getting out to a 2-0 lead in the Best of 5, the blue team felt good. Glenny Balls was looking like the most graceful athlete of or lifetime.

But Spider said not so fast.

And he proved to be correct with his prediction. It went to 5 and the fifth round was a doozy. Neither team could manage to order the six High Noon cans correctly. It was wrong order after wrong order. It was starting to become statistically improbably that both teams could be wrong so much. In the end, Kelly was finally able to remember the order and won it for the yellow team, shocking everyone.

The blue team's dominance came to an end. The yellow team finally had the chance to break up Dana and Marty, and they did just that, taking Marty away from the blue team. To replace Marty, the blue team chose Vibbs over Spider and Kayce. So heading into the finale our new teams are…

Excited to see how it all turns out into tonight's finale.