Via the Los Angeles Times:

A major explosion in South Los Angeles on Wednesday evening damaged homes and injured 17 people, including police officers, as a bomb squad attempted to safely detonate improvised explosive devices that had been seized from a home along with about 5,000 pounds of illegal fireworks.

The blast damaged cars in a residential neighborhood and left debris on the streets, video on social media showed. A truck that was being used to collect the explosives also appeared to be severely damaged.

Here's a few angles on the blast:

An LAPD bomb squad transferred the improvised devices into the iron chamber of a semitruck that’s meant to contain such explosive material, he said. 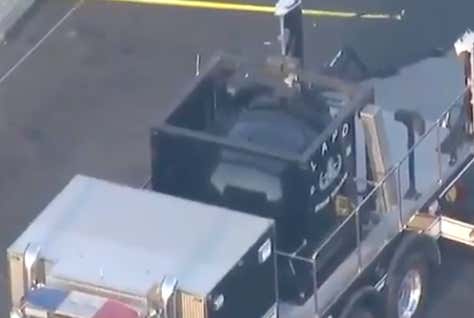 Police detonated the devices at 7:37 p.m., believing that the vehicle would be able to contain the explosion, but there was a “total catastrophic failure of that containment vehicle,” Moore said.

According to the LAPD some of the injuries were serious but thankfully none are life-threatening.

I understand that mobile-pizza-oven-lookin'-pod is meant to have explosives detonated safely inside of it, but why on Earth they chose to detonate it in a tightly packed neighborhood, and with that amount of fireworks & improvised explosives (homemade fireworks in this case) all at once is beyond me. Then again, taking them through other neighborhoods & on the highway is not a great idea either, especially since cordoning off the entire route would be an enormous pain in the ass… but maybe not doing all 5,000lbs at once would have been the move? (If any bomb tech/EOD folks read this please let me know in the comments.)

Just a few months ago in the city of Ontario (35 miles due East of LA), another illegal fireworks explosion killed two people and caused $3.2M in damage to another tightly packed neighborhood. What sparked the initial blast isn't known but illegal fireworks probably aren't the most stable and it doesn't take much. The police were not involved in that detonation.

In closing, coming at you with the pre-Fourth-of-July buzzkill, the Consumer Product Safety Commission says firework-related injuries were up 50% last year (nearly 15,000 injuries and worse). I'm guessing that's because so many community celebrations were cancelled due to COVID that people clamored to get their hands on the explosives for DIY shows with close family & friends in their own yards.

Will that trend continue this year now that so many have a taste of the euphoria that comes with neighbors & friends 'ooooh-ing and aaaah-ing' at their own displays?

As someone who went to a Marine wedding in the boonies where everyone got blackout drunk & then started shooting them off with reckless abandon around 2am I get how things can escalate quickly. Very sobering to see a bunch of giddy, hammered dads tipping over when they squat down to light extremely slanted half sticks together, and that's even without the Scooter Sticks attached. Sobering, (yet awesome, goddamnit). Whatever you're doing stay safe out there this year. Sending good vibes for a speedy recovery to those involved in LA.