Episode 2 of Barstool vs. America was last night, and the show is really shaping into form. Nobody really knew what to expect from this since we basically created our own version of a reality show, but after last night's episode, things are starting to heat up from both a strategic and dramatic standpoint. Catch up if you haven't already. Now let's get into the recap.

We start off this episode on the heels of Marty's decision to deprive Pat of reward after our first team swap, and the strategy wheels are turning. Marty showed some evidence of having a brain by saying he told Pat he could have the bed on the RV and that he just wanted him for his athleticism in the next challenge.

But then we really start to see some strategy from Pat. He's thinking not only about his relationship with each contestant, but each contestant's relationships with each other. This is the next level thinking you need to have. He thinks he can trick Marty into liking him. He has Vibbs on his side. But he's worried about Dana B. His strategic chops really show when he starts talking about the deals he made for the final challenge. He says he can tell Kayce and Vibbs that he'd protect them both at the final challenge because they won't talk to each other and sniff Pat out. But he knows he obviously couldn't do that with two closer people like Dana B and Mush. It was impressive stuff from Pat, who is embracing the strategic villain role.

We then join the AirBnb where Glenny, Spider, Kayce, and Kelly stayed for the night. Always punctual and respectful, Balls is the only one wide awake and ready to go for their 7 AM call time. He walks us through the house and tells us that there was "a very bad occurrence last night" involving this horse head that looks like the Illuminati head from the Denver airport. 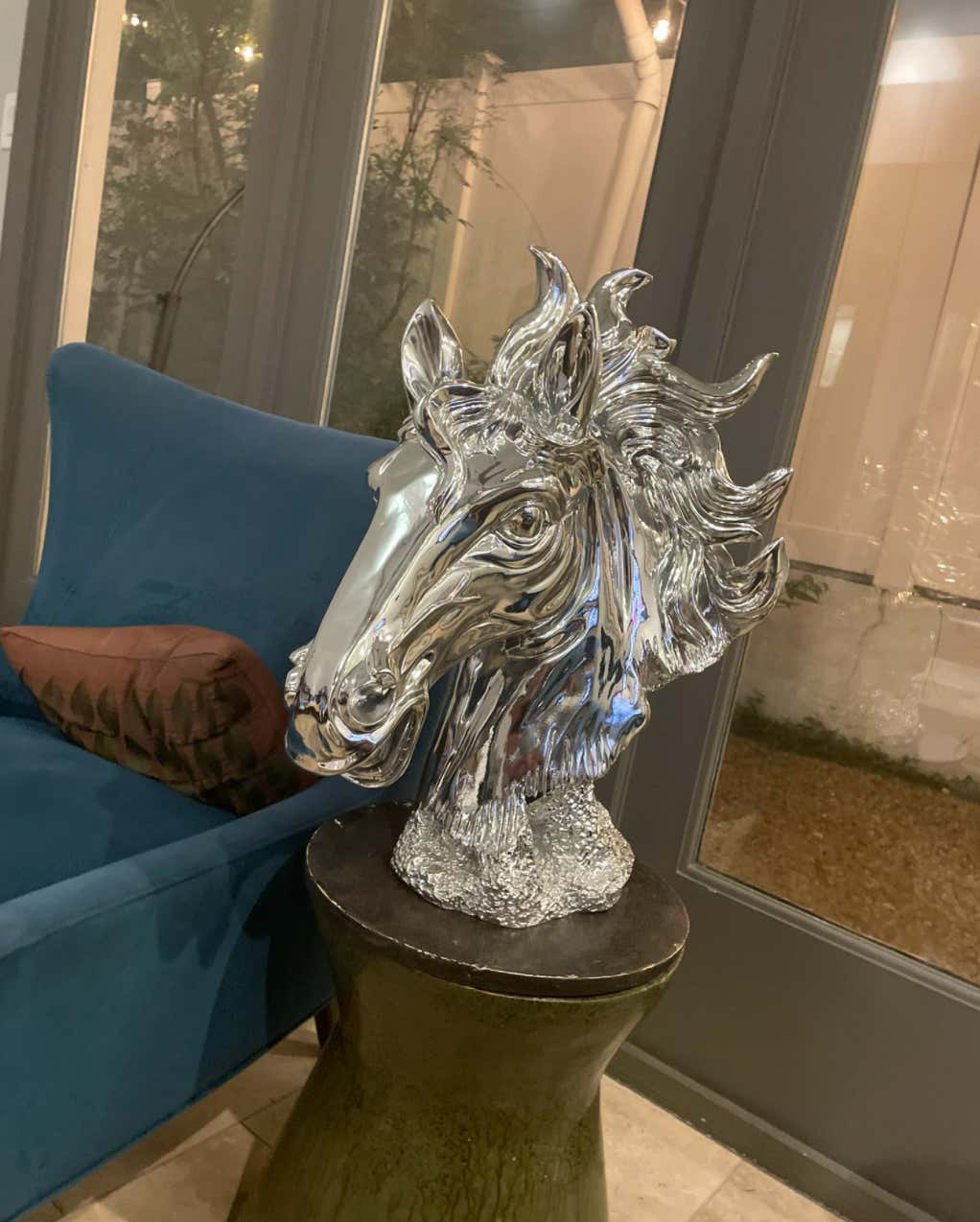 Marty (from the blue team), played a prank and put it next to Glenny in his bedroom, leading to Balls complaining that he wanted to go back to the RV and doesn't like AirBnBs to begin with. Does he know that part of the prize is a month long AirBnB? Unclear. Anyway, this somehow led to a fight between Spider and Balls that got pretty heated. To be honest, I don't totally know why they were fighting? Spider demanded an apology for Glenny acting like a "baby back bitch" and then trashed Balls for living with his parents at 26 years old (to be fair he doesn't turn 25 until August). As a fan of both Spider and Glenny, I hated to see them fight. But as an even bigger fan of tension and conflict, I loved to see them fight.

We then had a very pure moment as Glenny Balls saw the Mississippi for the first time. As much as he hates AirBnBs is apparently as much as he loves rivers. It has to the most excited a person has ever been to see a body of water. But that's why we love the guy. Kelly was less impressed and let out a "This is it?" in the background. 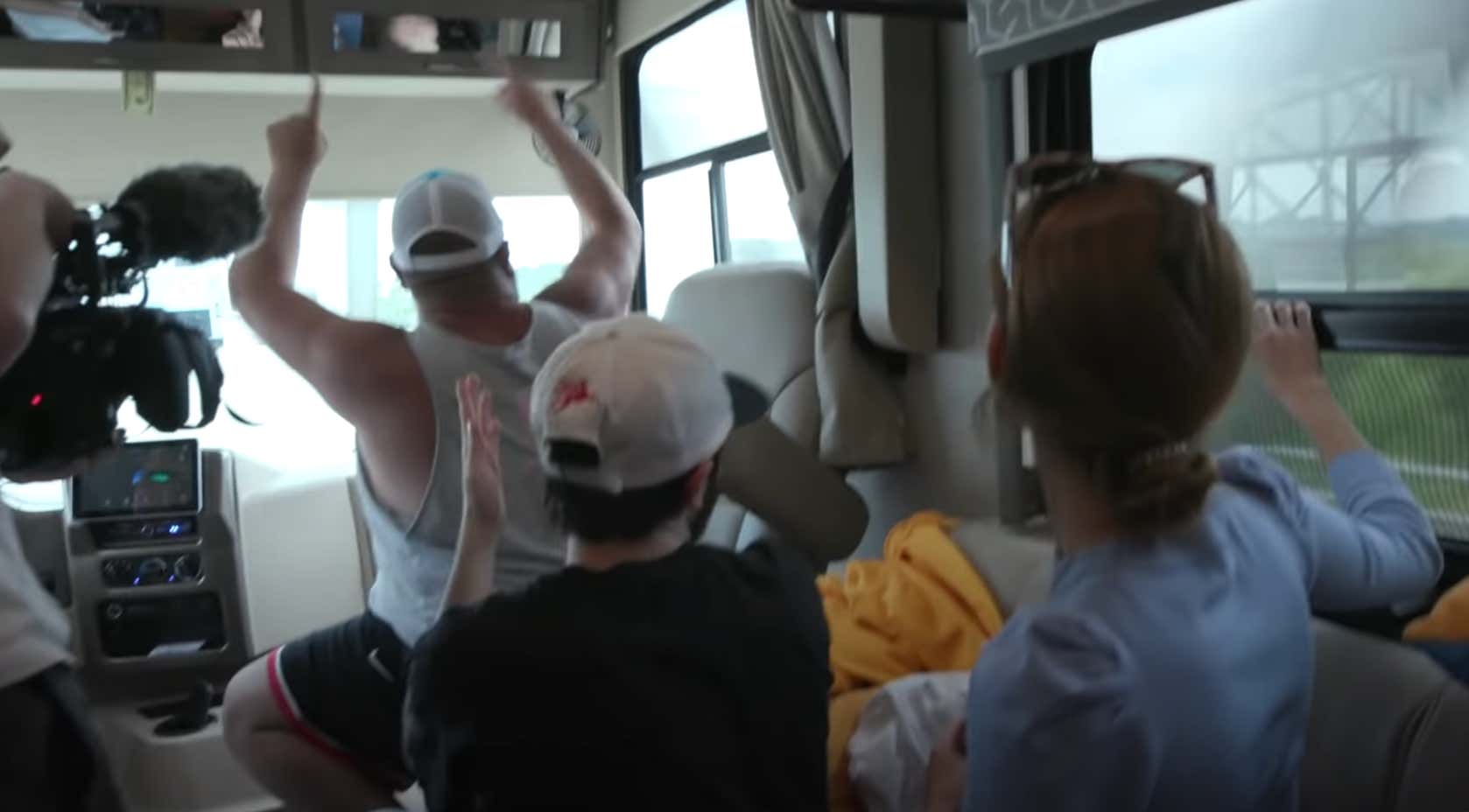 There also seemed to be a clear divide on this bus between the guys and girls. Spider and Glenny, now friends after that vicious fight over a fake horse head, did their own thing while Kelly and Kayce did theirs. One quote of note was when Spider said Kayce was starting to be high maintenance. Obviously he didn't see her introduction where she described herself as not high maintenance. It was funny that he wanted to keep his voice down so she wouldn't hear him, as if it wasn't being recorded with a camera. Let's see if this rivalry starts to form.

On the other bus, Marty and Dana tried their hand at talking strategy and alliances. It went about as well as you would expect. 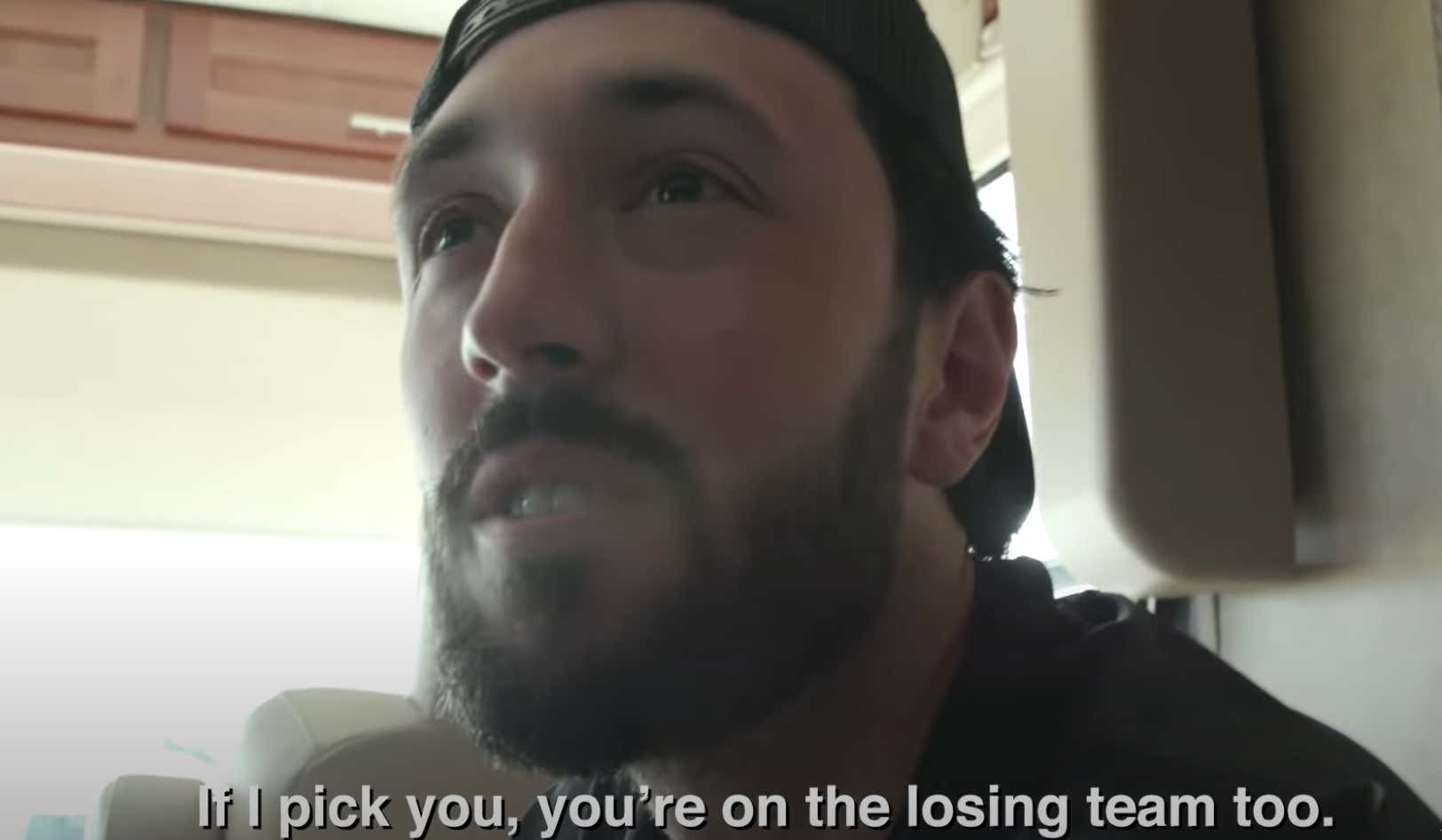 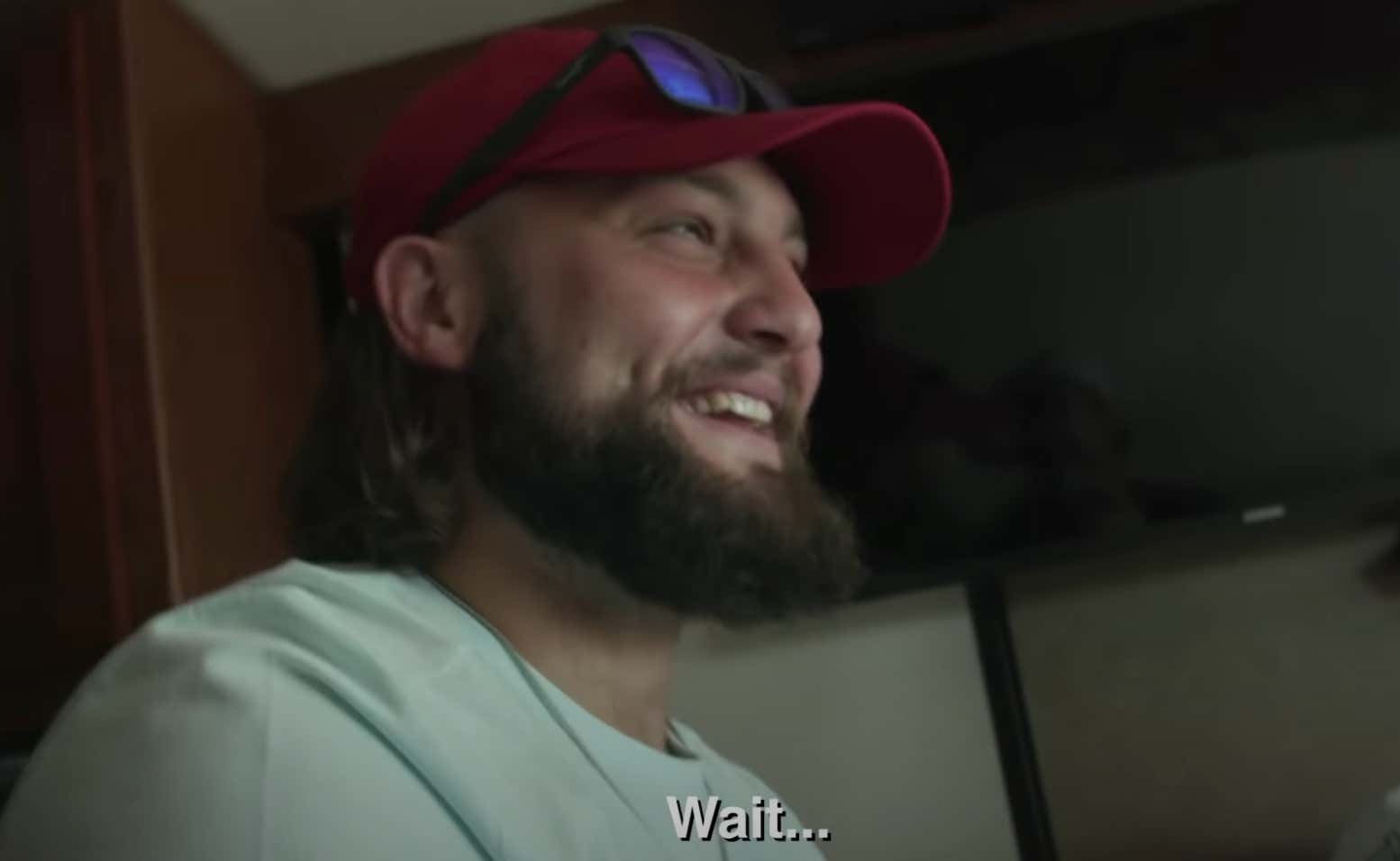 And with that stroke of genius, we're on to the captain challenge in Panama City Beach, Florida.

This time it was a food challenge, again with each employee paired up with a Stoolie. Asked before the challenge started, Spider said he felt that none of the challenges really mattered until the last day. I agree with this strategy. An AirBnB for a night is nice, sure. But you need to have your attention focused on that last day when the big prize is up for grabs. 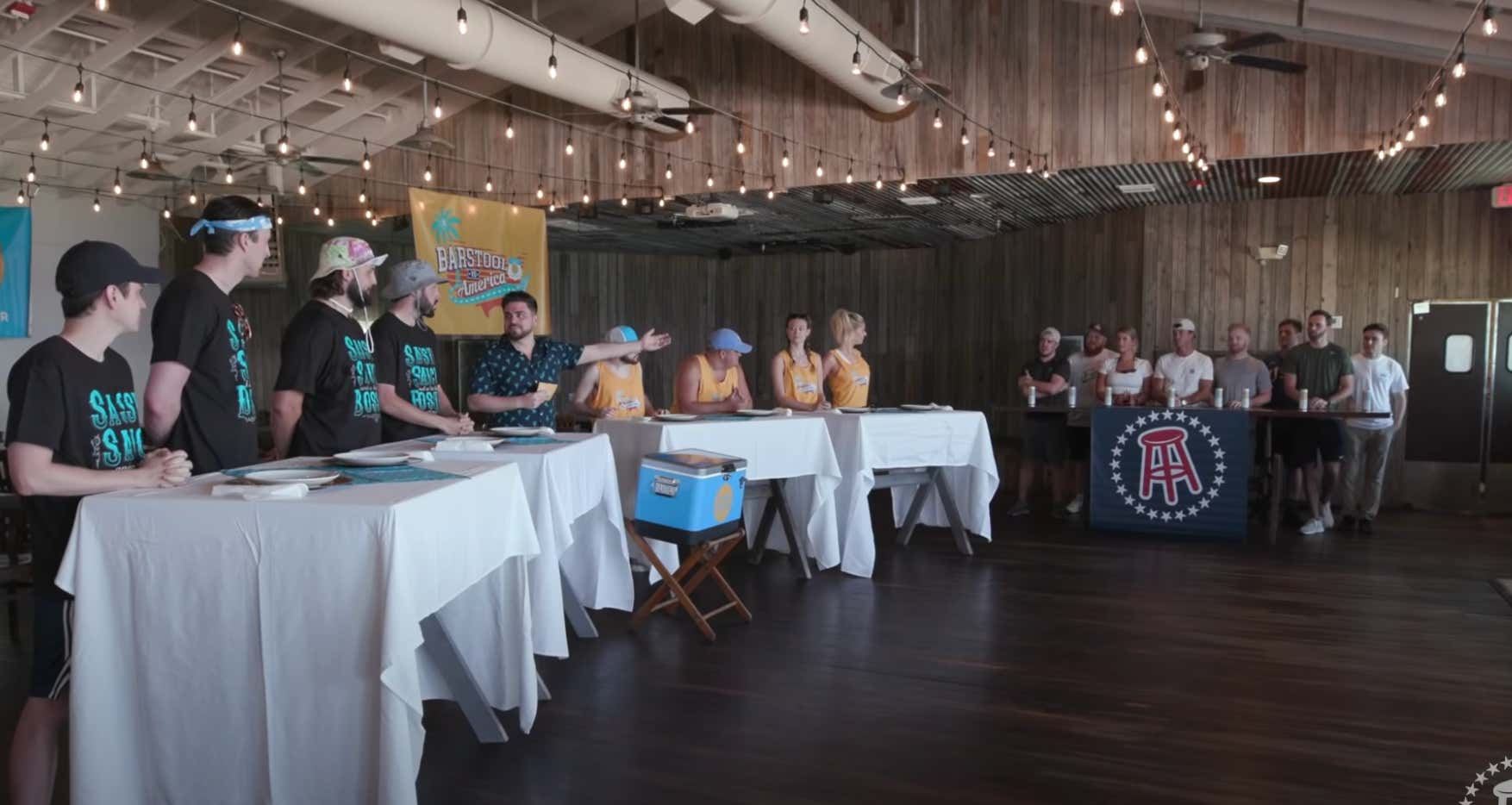 Glenny had first pick and he promptly picked the one hot girl among the 8 Stoolies. BONK

They then rolled out a live gator, scaring Glenny Balls even more than the horse head did. 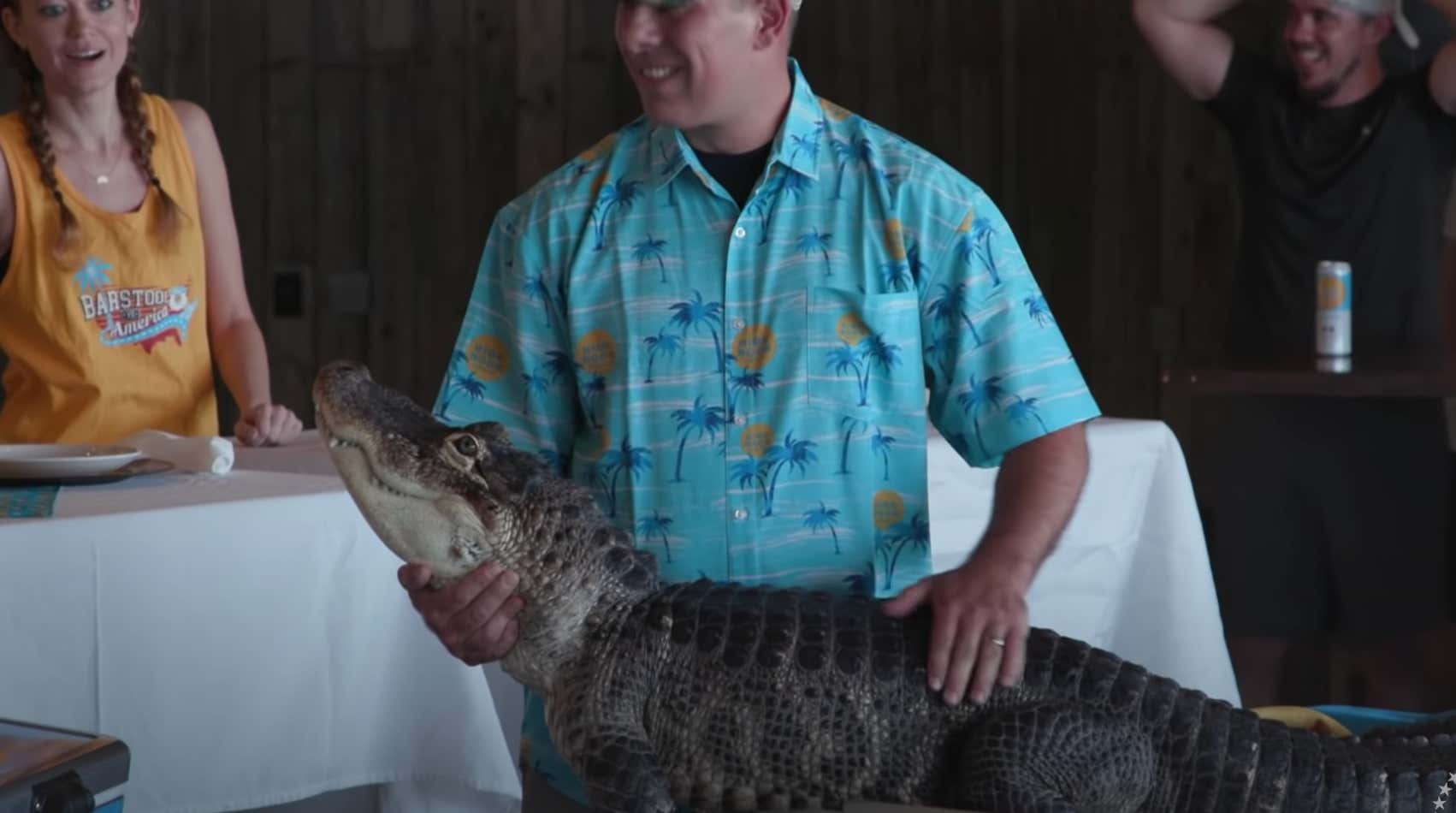 After finding out that Bubba was a therapy gator, Balls said, "At the end of the day, Bubba seems like a nice guy. He helps special needs kids. He's 25 years old so we're about the same age. He seems like a cool dude." At this moment, I started to wonder if Glenny thought Bubba was a human being based on these descriptions.

The foods they had to eat were fried gator, cole slaw, french fries, and some Florida key lime pie. Dana B lets us know that he was raised on cole slaw.

"My parents gave me coleslaw every night. They didn't raise no bitch." This is the first time I've ever heard someone associate eating a lot of coleslaw with not being a bitch. But Beers did back up the talk, winning the captain role on his team, while Glenny won the captain role on the yellow team. I don't think Glenny beating Kayce, Kelly, and Spider in a food challenge can come as a surprise to absolutely anybody.

Oh also Dana chugged some garlic aioli and then promptly threw up all over a Stoolie.

By the way, I just want to see that it's absolute bullshit this show got to eat food that is just straight up delicious while on Surviving Barstool, we had to eat dinosaur eggs and pork brains.

Over on the blue RV, the foursome of Marty, Dana, Pat, and Vibbs were talking about how they felt very confident for the team challenge since they were clearly the more physical and athletic team. Dana said that as long as him, Marty, and Pat stick together as the three best athletes, they can win all the challenges. Kind of funny considering that Vibbs is the only one of the group who played a sport at a D1 college. But regardless, it was clear this was the more athletic group. There was then some very mean slander of Glenny Balls. "We want Balls in the physical challenge. If he's in it, we have a cakewalk." Might be true but still mean!

It was time for the team challenge. After Dana gave a quick "sup?" to Allie (bonk), Jeff explained the rules for the challenge. It involved finding frisbees in a ball bit, handing it to your team captain, and then the captain had to throw the frisbee into the opening of a large high noon can from four different spots. 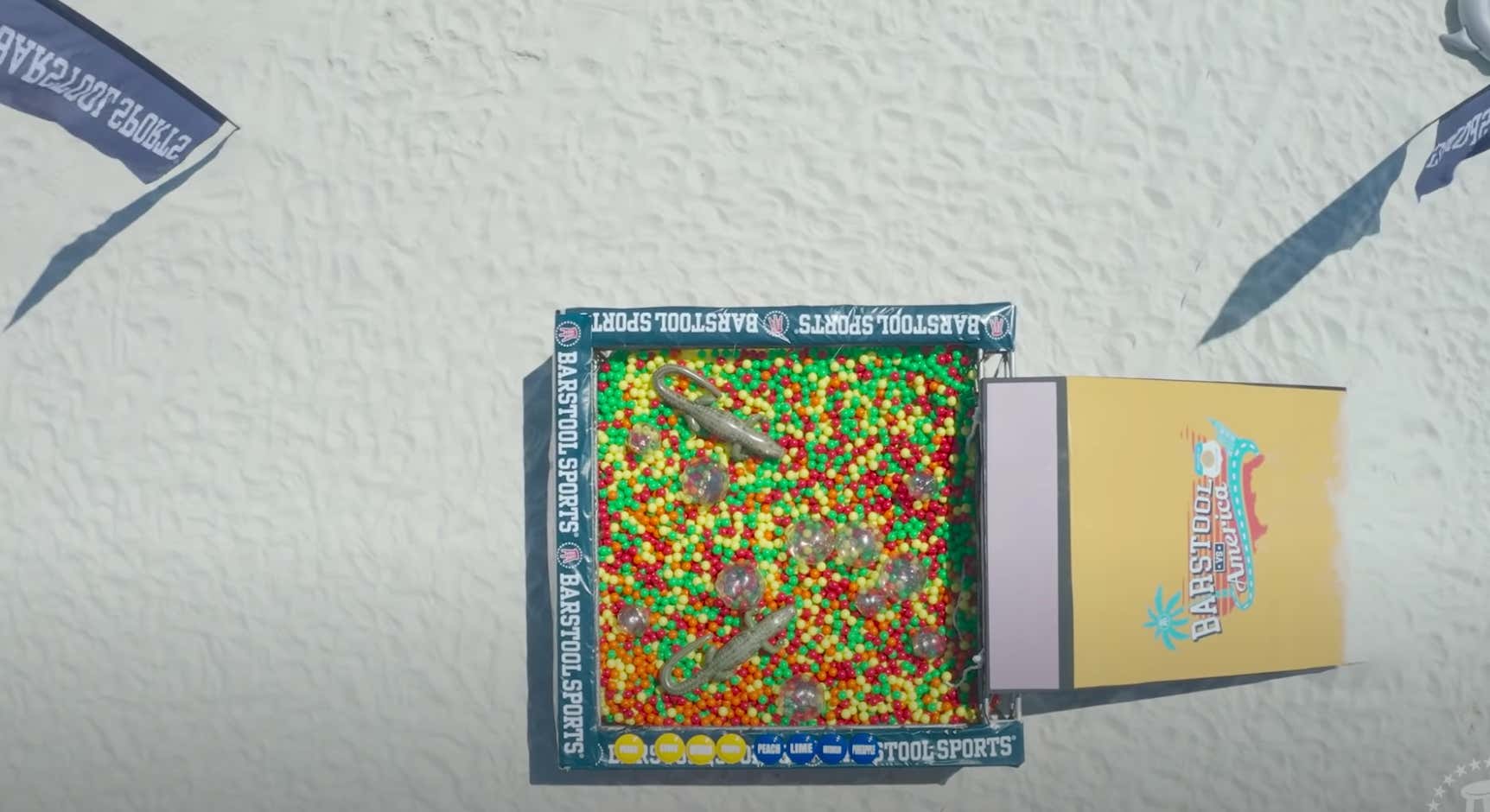 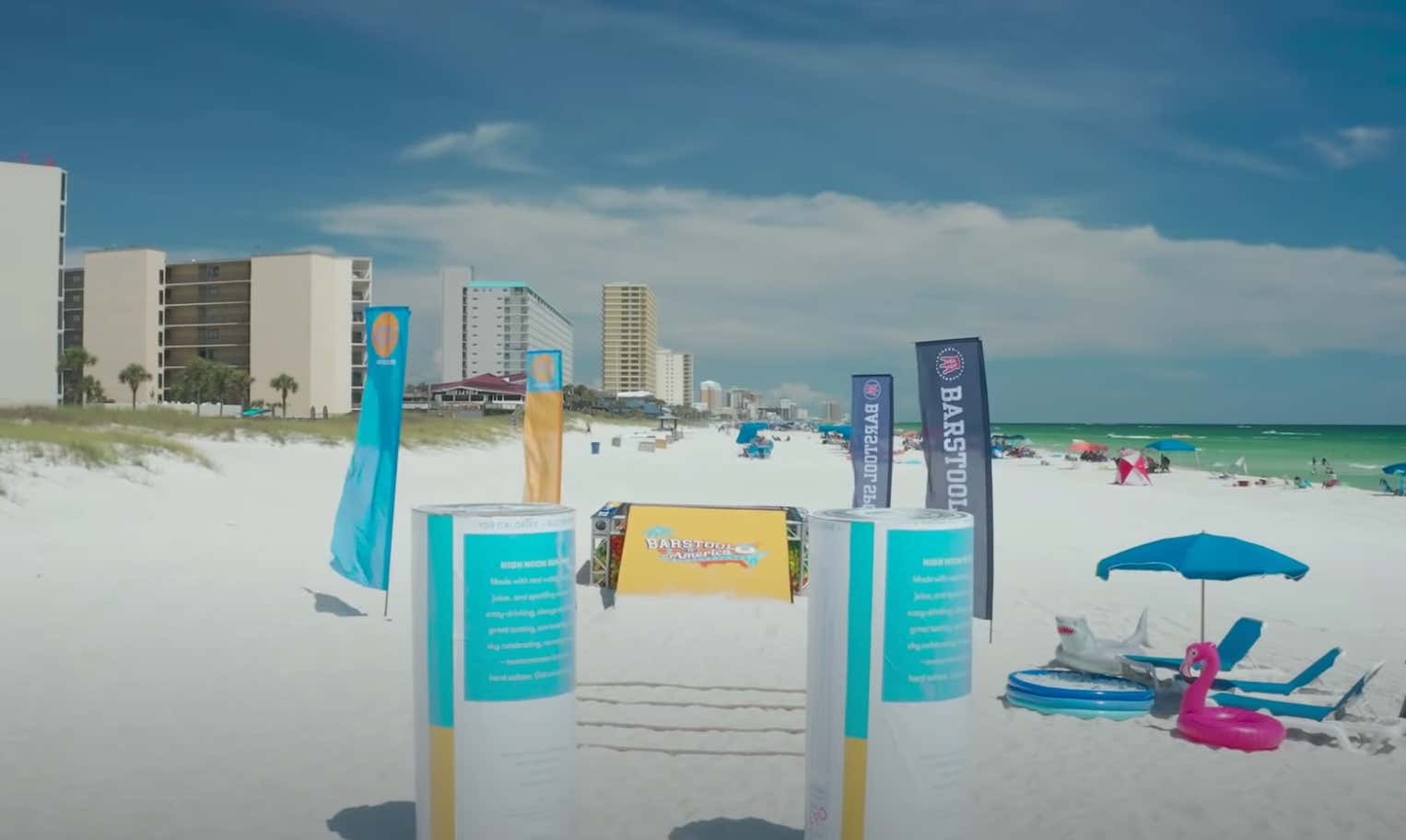 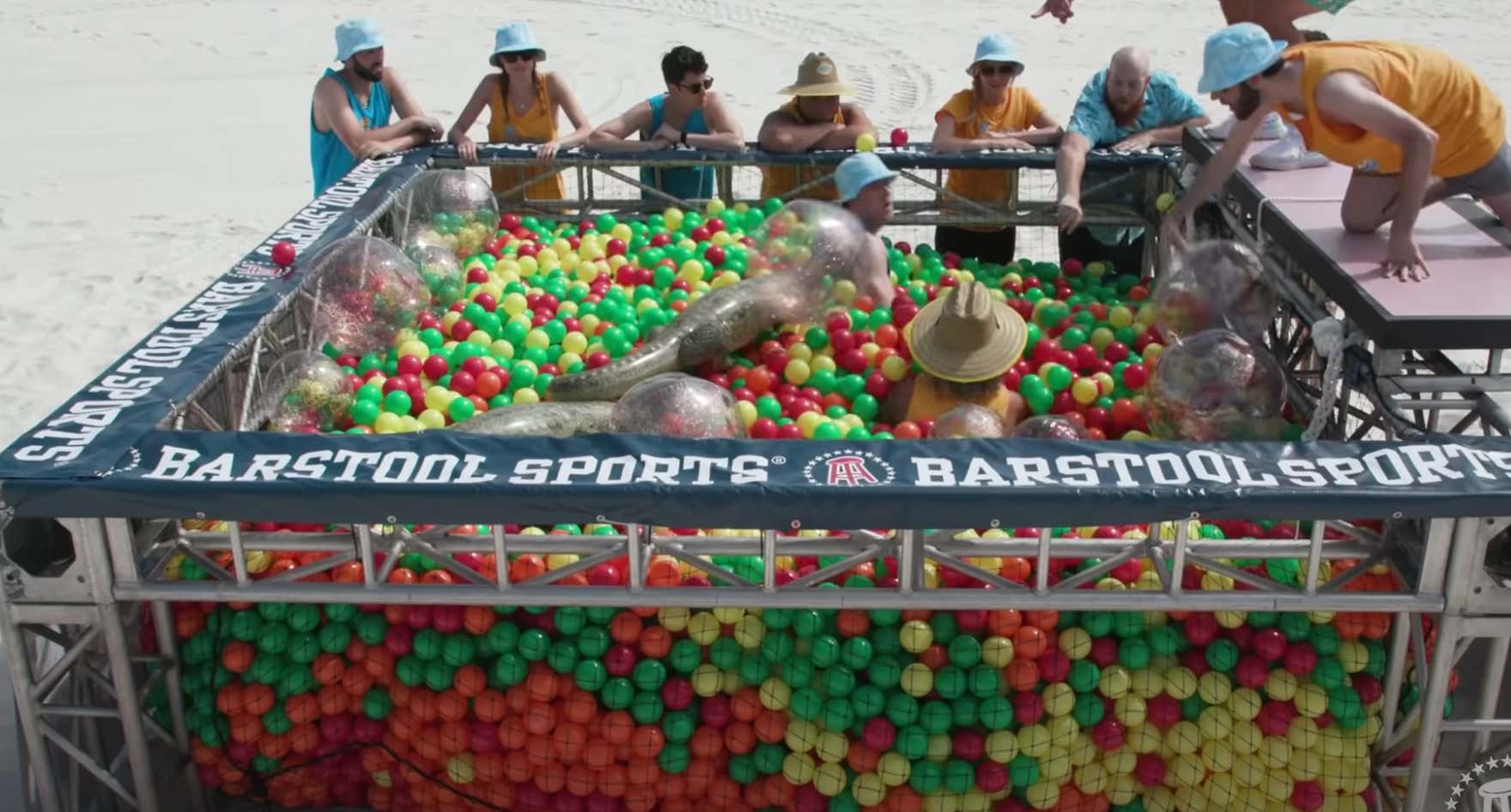 Glenny wasn't confident in his frisbee tossing abilities, so Spider took over the role of captain and frisbee tosser for the yellow team. I had no idea you could just flip captains like that. Wonder if this strategy will be implemented more going forward. As for the challenge itself, Spider established that he was going to play dirty.

In the end though, Dana got his revenge and won it for his team.

The guy just loves getting his dick sucked.

Although there does appear to be some controversy today pointed out by ABP. 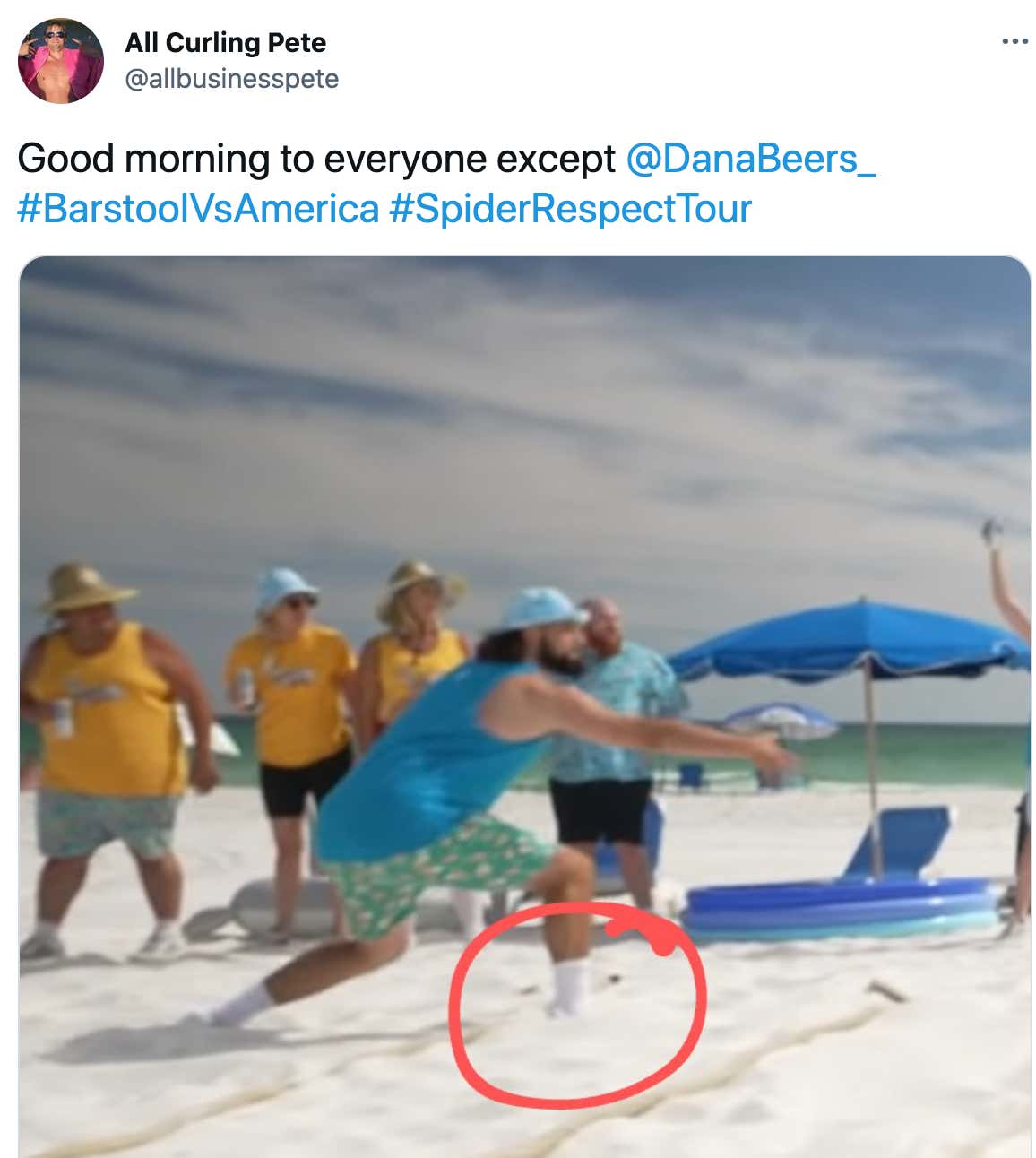 Surprised Spider didn't strangle Ref D Lowe with his bare hands over this. Also just want to give a quick shoutout to the editors for some awesome fake out music in this challenge, very Survivor-esque.

There's strategy on both sides. Personally, I would want to add someone from the other team and make an ally out of them, while not making an enemy by kicking someone off your team and having them miss out on the reward. The logic to removing someone though is that you control who from your team you want to keep. Dana clearly wanted to keep the trio of himself, Marty, and Pat together, so he chose to boot Vibbs.

I think this was a bad decision. While you kept your team strong, the show is still very far from the finish. It's inevitable you'll get broken up at some point, and now you've made an enemy out of Vibbs. To be fair to Dana though, it seemed like he didn't totally understand the rules and they are a bit confusing at first, so we'll cut him some slack.

Spider then chose to give Kelly another night in the AirBnB, delaying a possible showmance between her and Vibbs for at least another night.

So heading into episode 3, the winning blue team consists of Dana, Marty, Pat, and Kelly. The losing yellow team has Spider, Kayce, Glenny, and Vibbs.

If we're tracking relationships, Marty and Dana have an alliance. Pat seemed to be on good terms with them both, plus Vibbs and Kayce. Spider is mad at everyone. Kelly and Vibbs may have a showmance. Balls is Balls.

A lot of storylines heading into tonight's episode which is apparently the juiciest one yet. Can't wait.