After a long work week of speaking on live radio to hundreds of thousands of people being self-conscious on YouTube to an audience the size of Oskaloosa, Iowa, hearing Feitelberg belly laugh at something that would make any other human barely exhale through their nose, and living in fear that the Barstool subreddit would repost my resume again, Nicky needed a fucking beer.

I needed to ingest a few alcoholic drinks made from yeast-fermented malt flavored with hops.

And I wanted to do it with a crew.

Unfortunately, this was an issue, as my only friends are an agoraphobic wrestler, a 20 year old cryptid, and John Feitelberg. 3 people I couldn't medically, legally, or reputationally be in public with.

This left very slim pickings, and I was a desperate man. A desperate man who was about to do the unthinkable. Ask Barstool's very own, KenJac, to grab a beer after work. For those who aren't familiar with Jack "KenJac" Kennedy, he would be the final product if 4chan came to life and had a child with Spencer Gifts.

What's the worst that could happen? He shows me a vile tiktok of a disgusting British foot? He destroys the manly public persona I have spent years building?

Sadly, both of these things came to fruition.

As we sit down at the bar, my stomach grumbles. A feeling only the hottest girls can ignore; hunger. As the waitress comes back to the table to refill my water (an obvious flirtation tactic) she asks if we'd also like any food (another tactic, now blatantly trying to fuck me). I make her feel special, and ask what she recommends.

"Our reuben is delicious."

"Cool, I'll get a pound of Korean wings."

She nods her head and puts the order in. Around 7 minutes pass as she returns with my plate.

"Enjoy your wings, hun." Ridiculous. I scoff. She's not even trying to hide her lust at this point.

I enjoy my meal, get the receipt, and tip the traditional 12%. As we are standing up to leave KenJac asks me to hold up my plate for a photo. 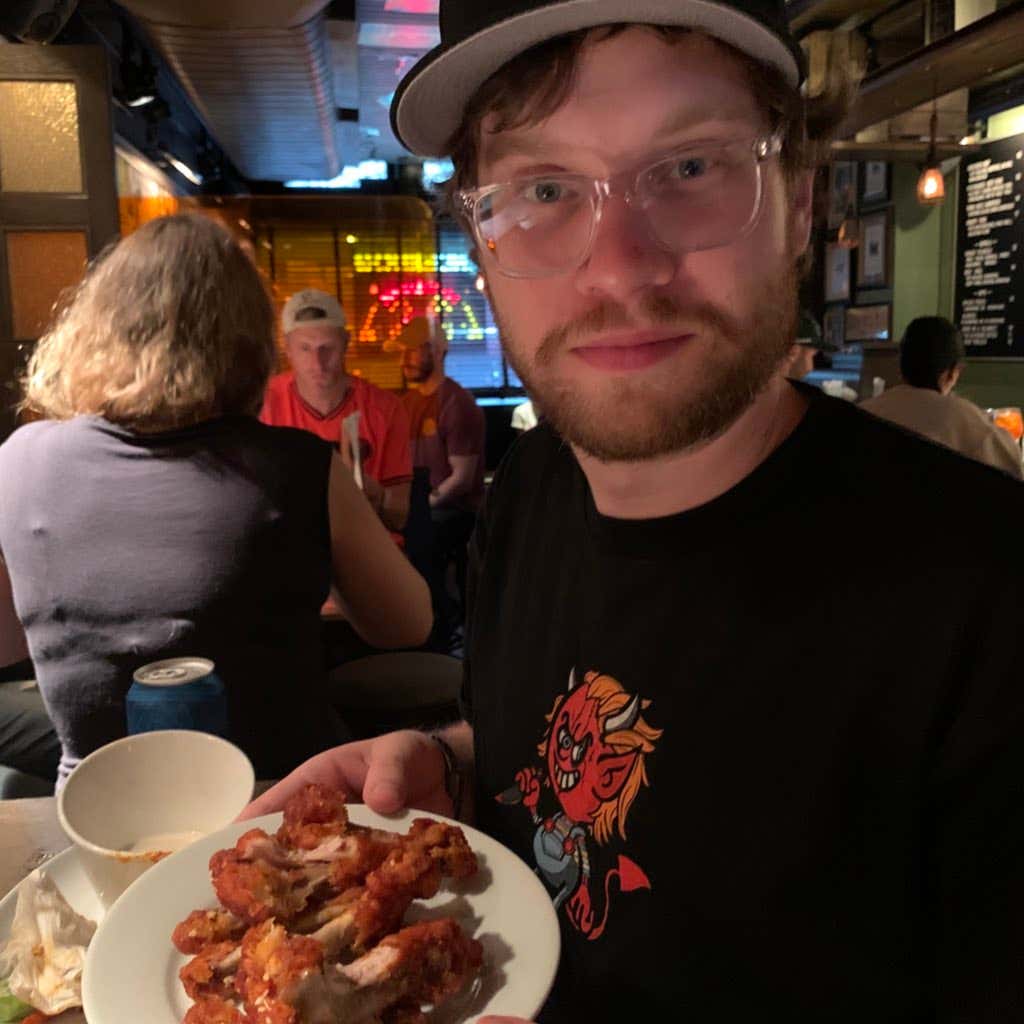 I initially thought it was a sly way for him to capture the middle class Francis Ellis sitting right next to us. Little did I know, this photo would change my perspective on everything forever.

I awake the next morning to a slew of texts, messages, and notifications.

"Nick are you serious?"

I open Twitter only to see every man and woman, every race and creed, joined together over one thing. Shitting on me. 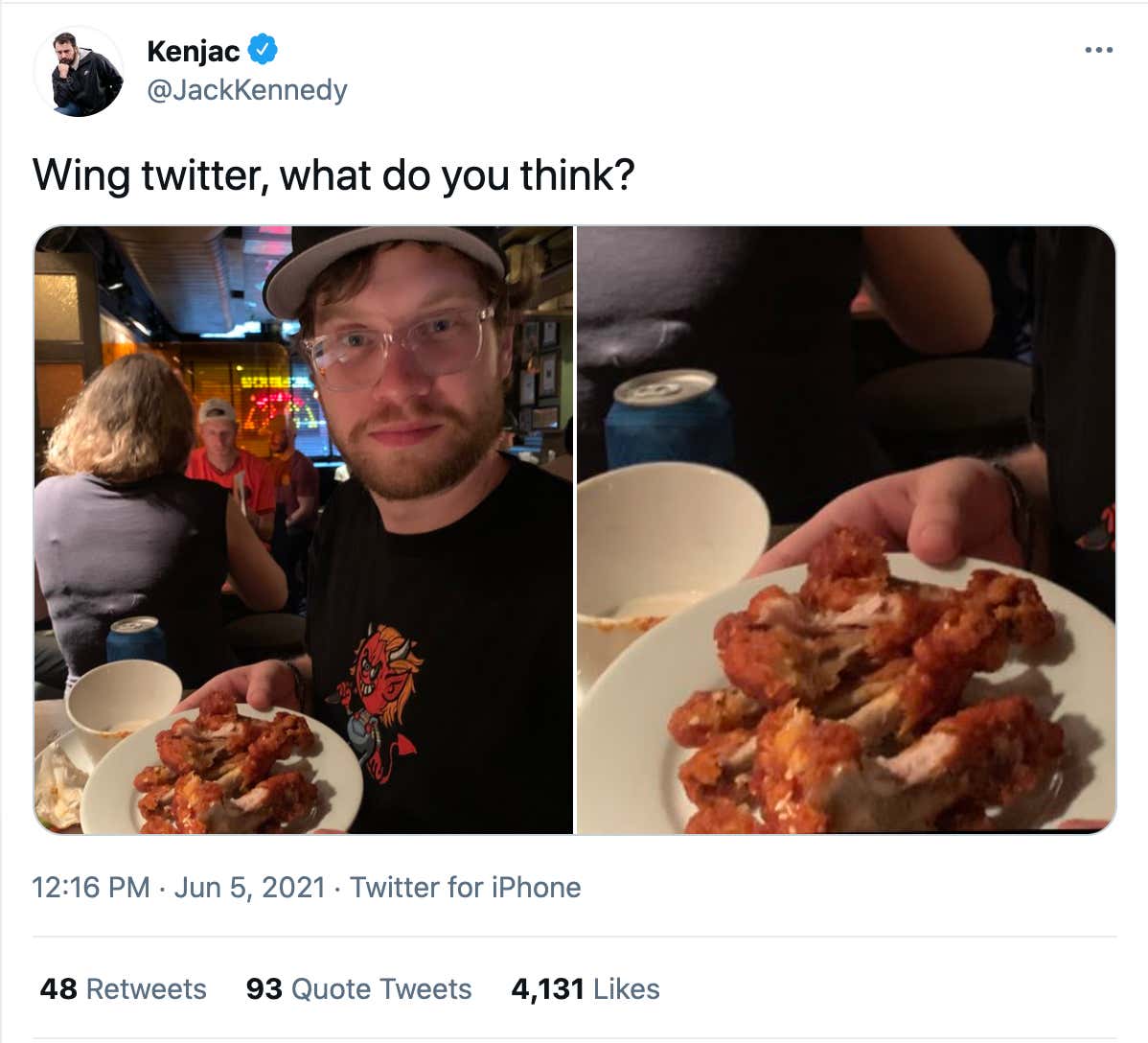 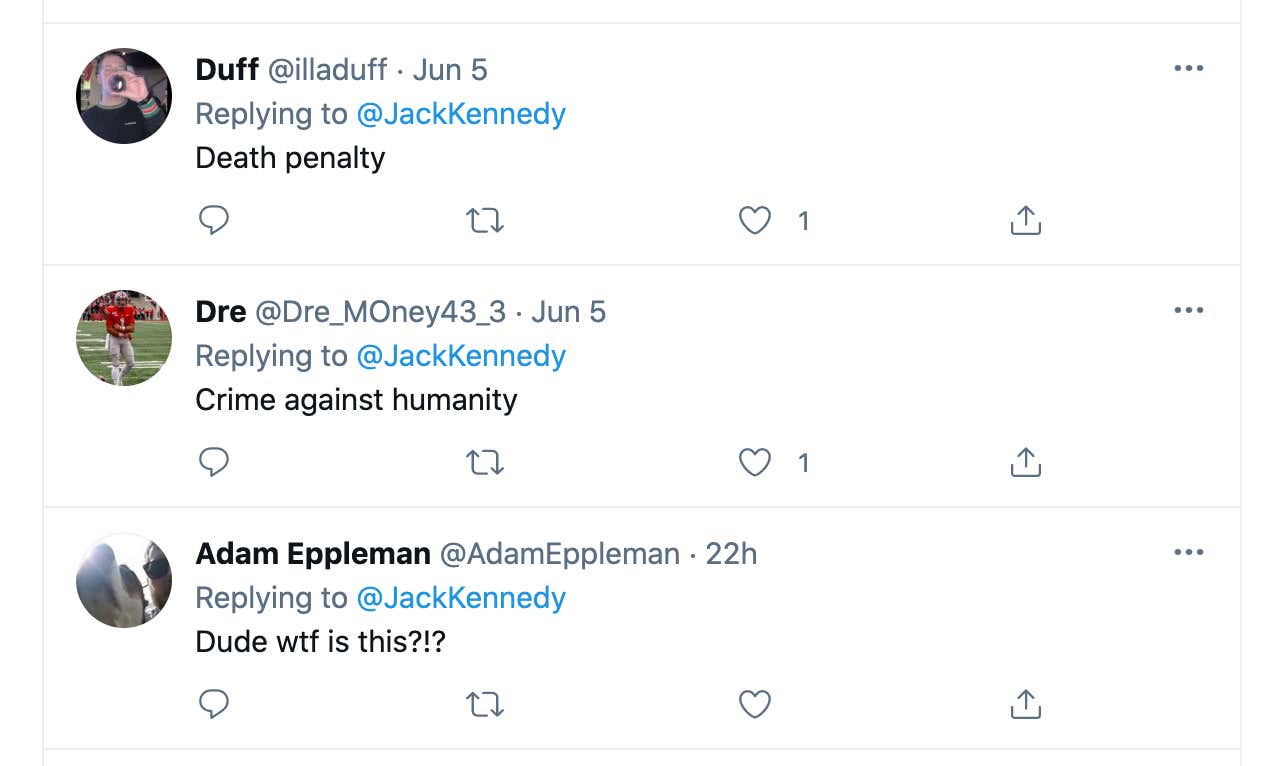 I gulp, do the sign of the cross, and call my Dad.

"What are you talking about? Shut the fuck up dad. I've angered the meat guys, can you let Mom know I love her."

He immediately hangs up the phone, certainly to tell my mom the bad news. The news that her son is no longer a man.

I want to ignore what is happening but I am still glued to my phone, preparing to argue with grown men that don't understand the irony of telling me I lost my man card for literally not sucking on a bone. 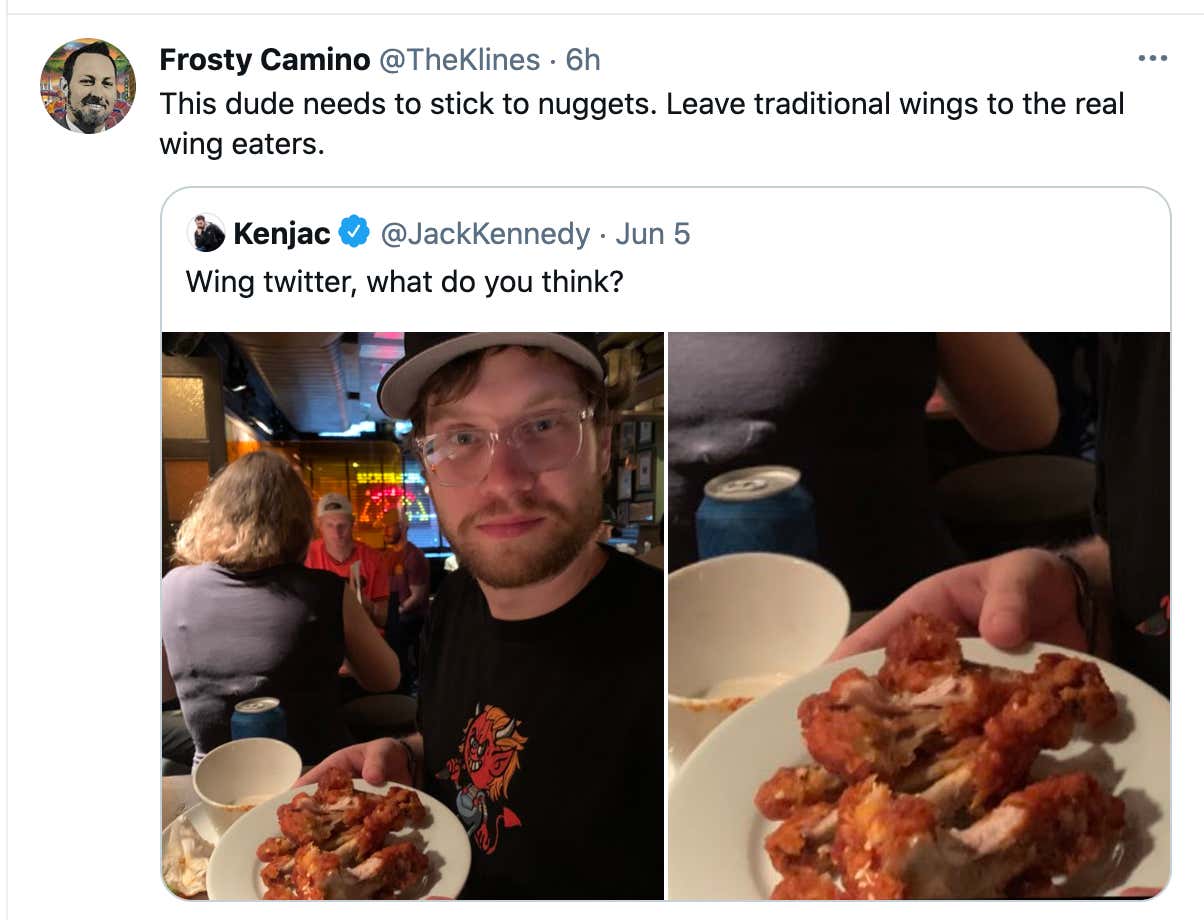 Some even brought race into the mix. 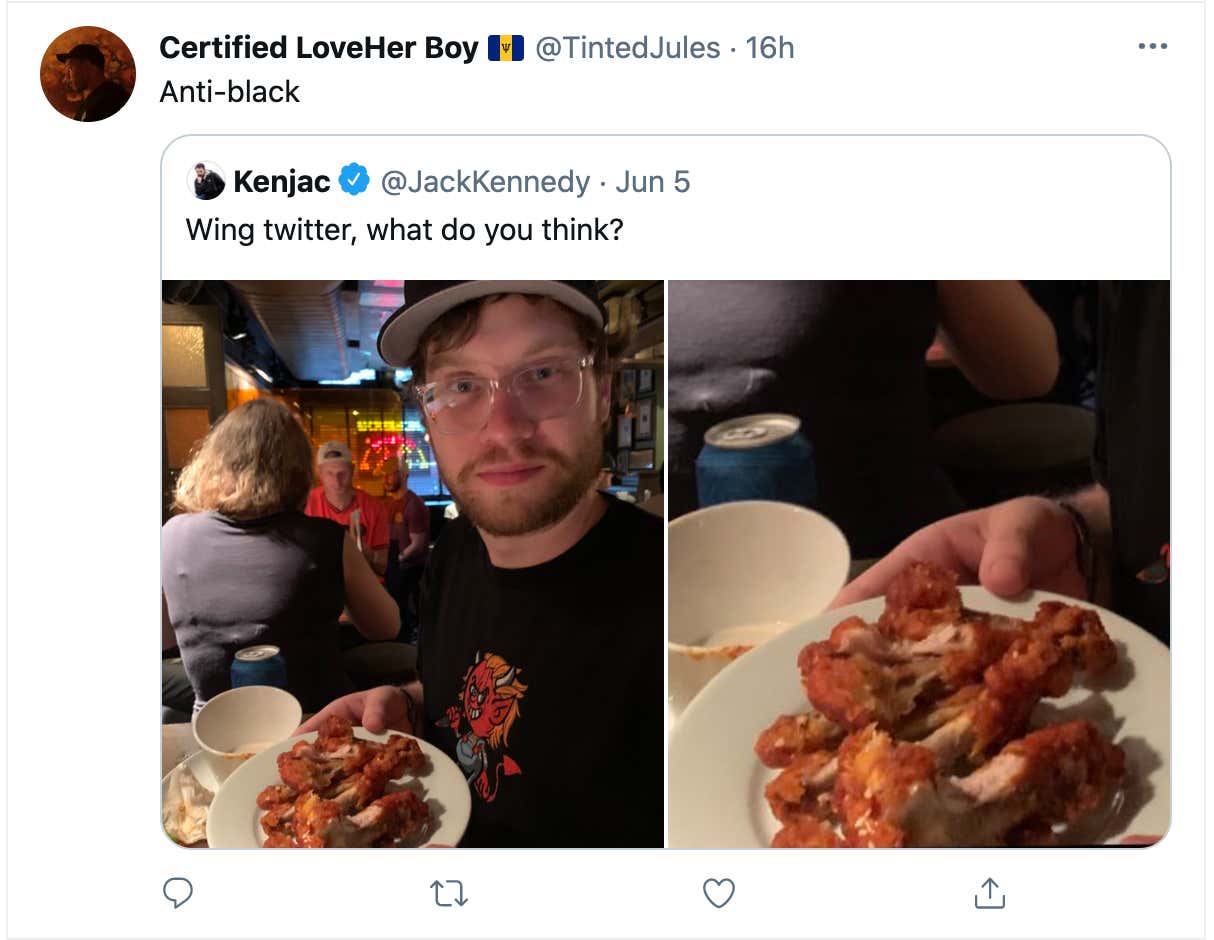 Some brought up the fact that I wasted my money on the wings, which isn't the case at all. Plus at least I ate some of it. Plenty of things are purchased and then ignored forever, like every single bit of ANUS merch, or Puerto Rico.

I kept looking, seeing something beautiful unfolding. Unity. People coming together. My mind was at ease. Until it was hit by a storm. No. Worse than a storm. A Hurricane. 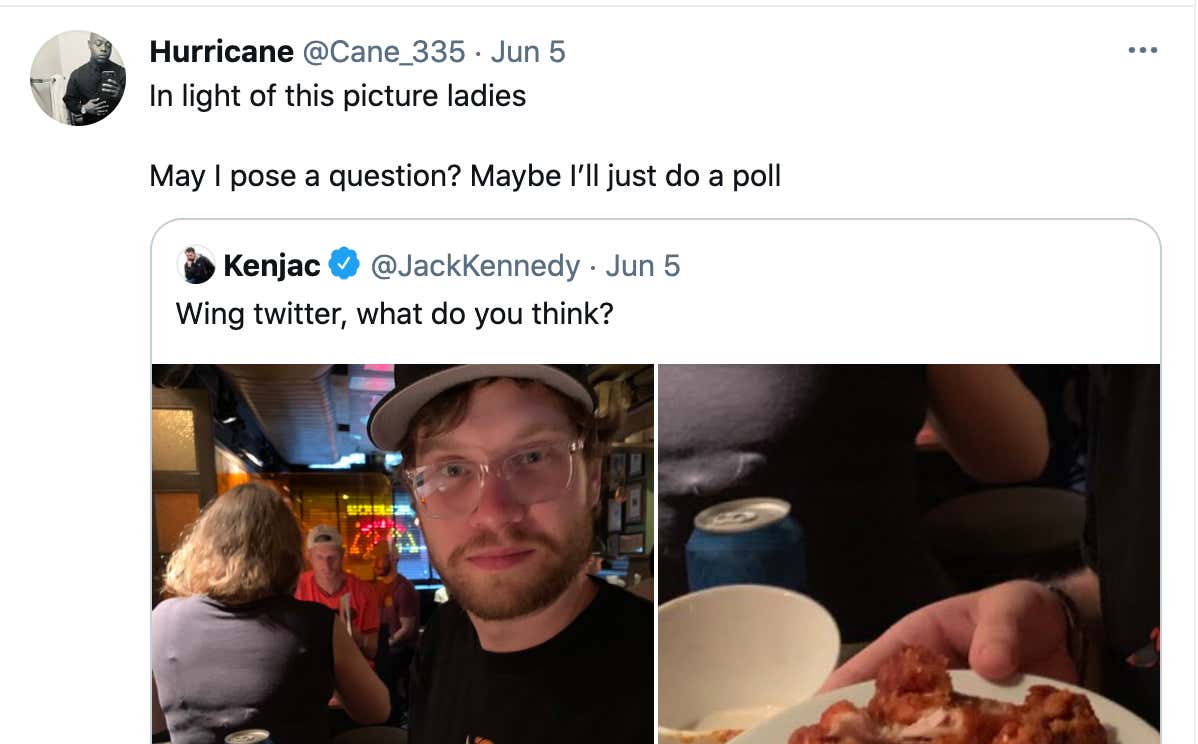 A lady specific question. This should be normal. 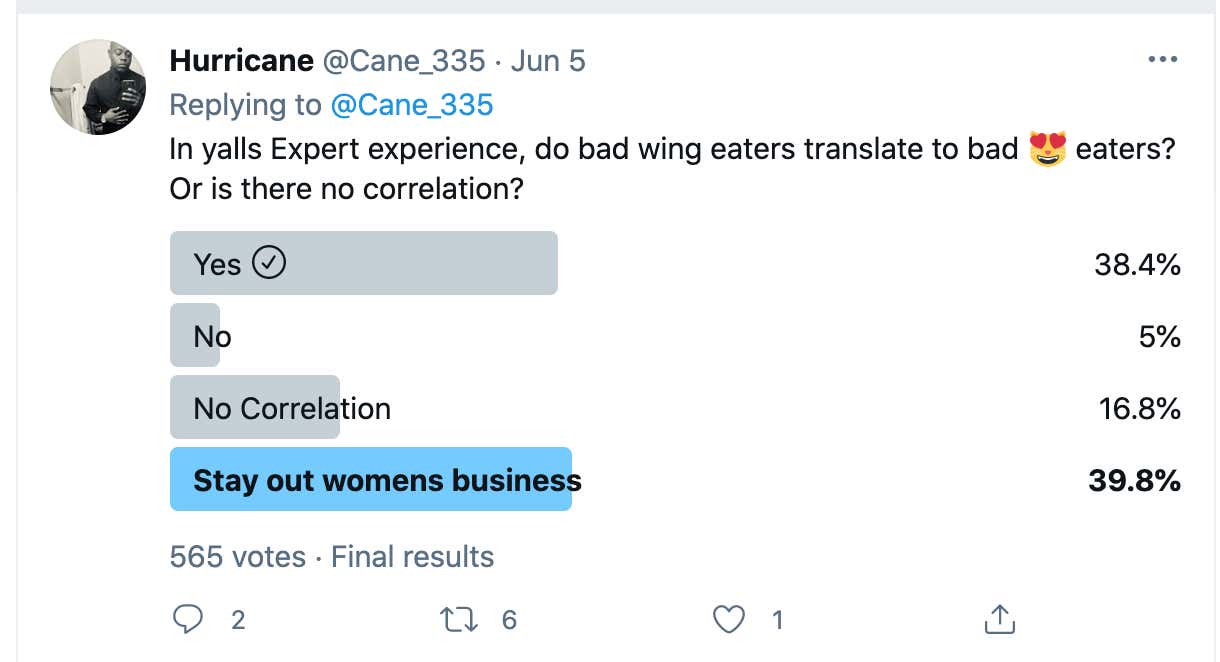 Do bad wing eaters translate into bad pussy eaters? This question sent me spiraling. I was left with no less than a zillion ton of questions. How does it correlate? I mean, yeah, you get to bone when you're finished doing both, but other than that, I was at a complete loss. Is there a better food out there that can prove your pussy eating abilities? I dove into research, starting with the basics.

If there are no photos of Michael Douglas eating a wing, that immediately rules out chicken wings.

After this though, I was desperate for any more leads. I took it to extremes, and….asked women. 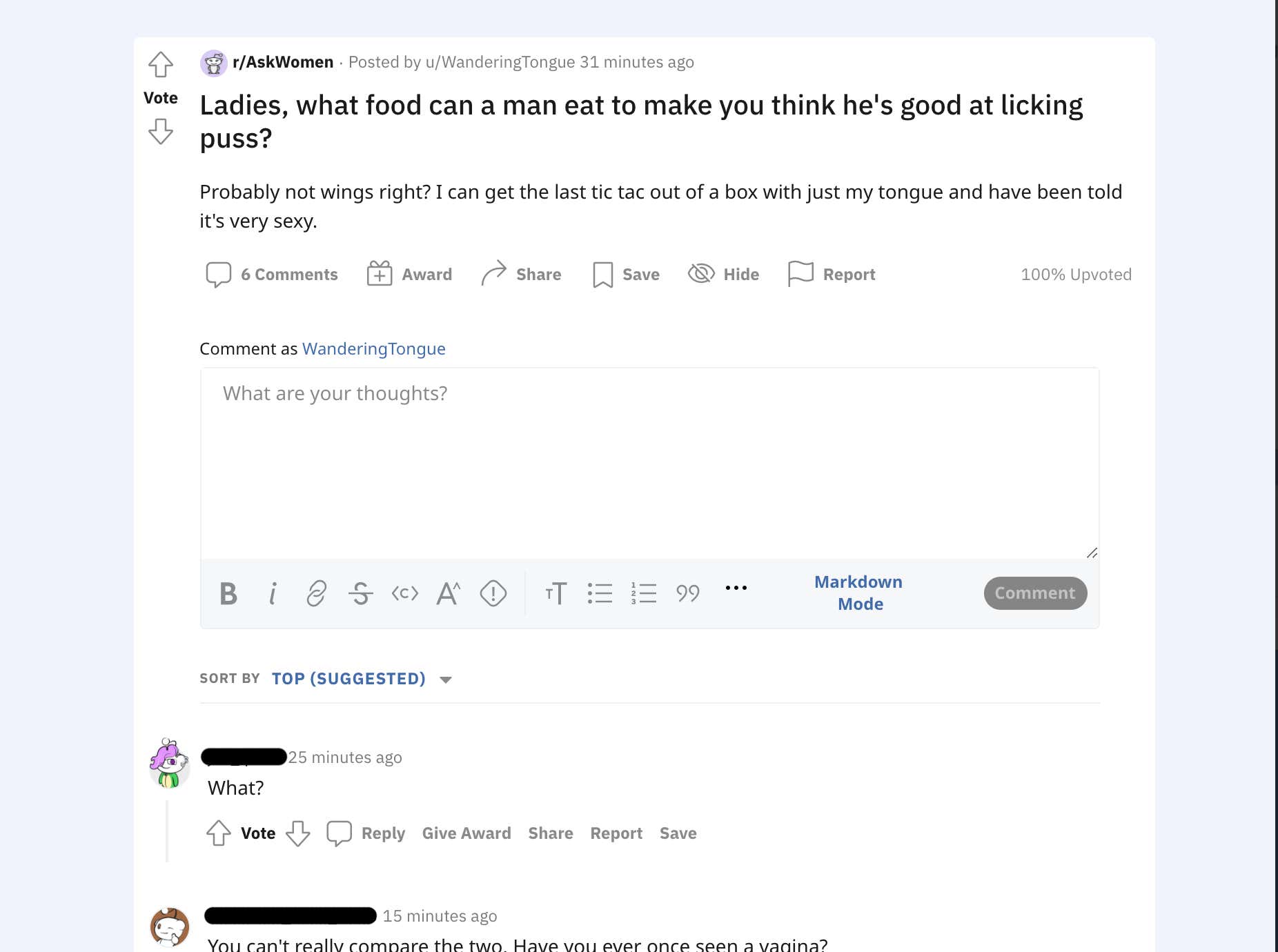 I soon realized I was getting nowhere. I needed to take it back a step and ask myself, what makes pussy pussy? I needed to reverse engineer the vagina and see what foods also fit into the criteria. 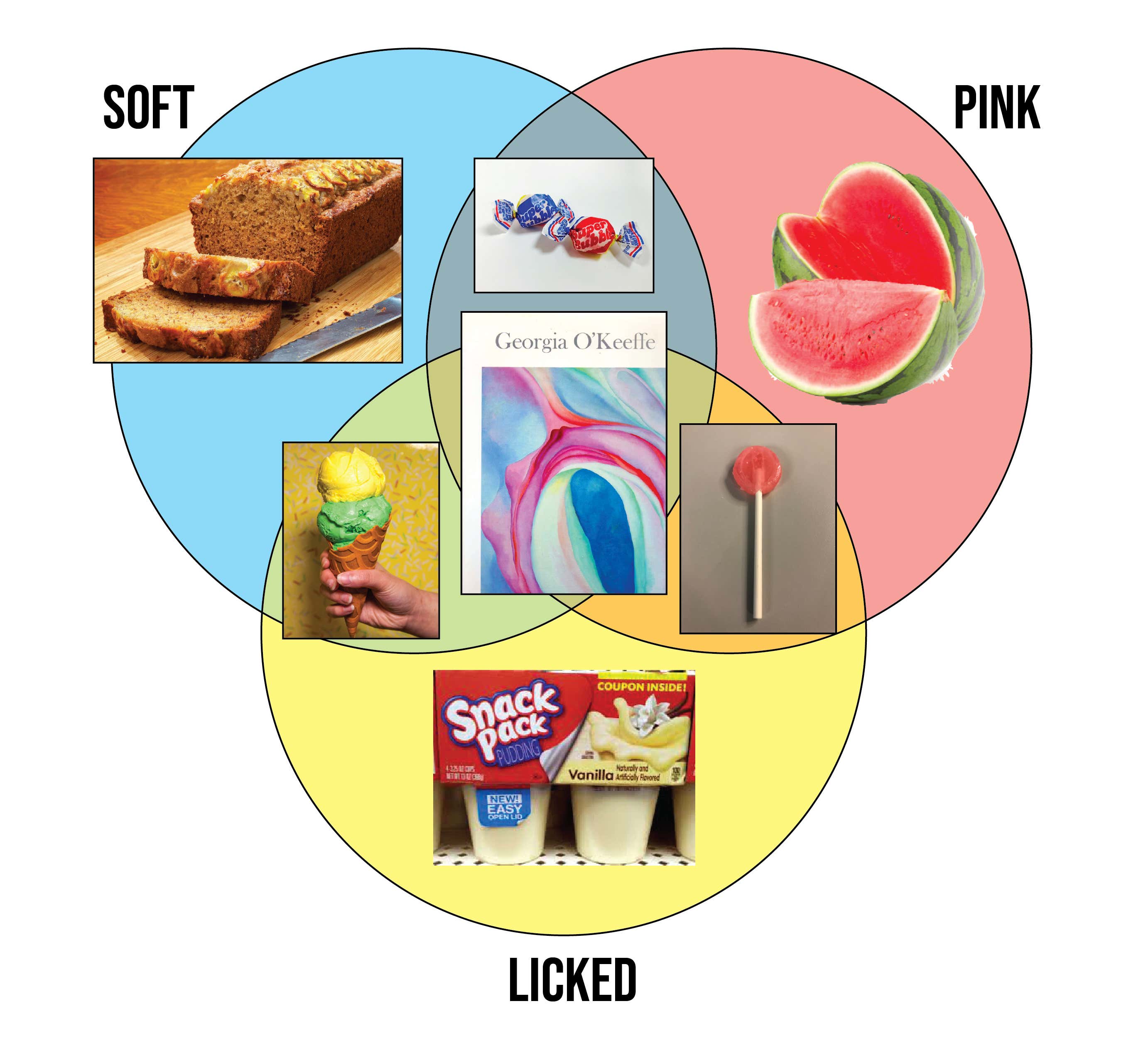 Okay so I need something that's pink, soft, and a food that is also licked. Ice cream is too cold. And suckers are too hard. There has to be something out there that meets this criter- 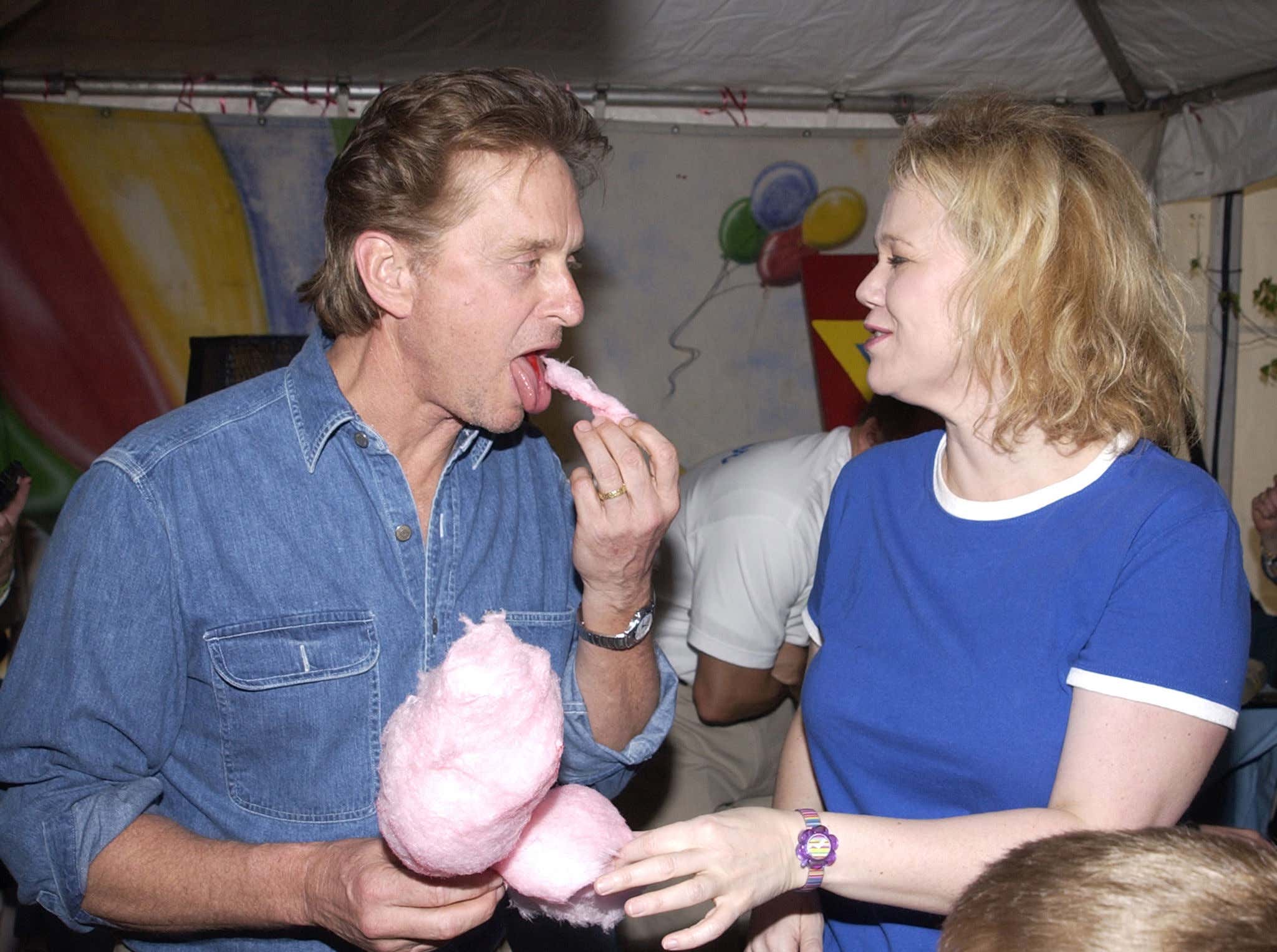