The word "Hate"  was a word that I wasn't allowed to use in my house as a kid. That type of energy is considered toxic and unhealthy. No one should ever go to bed at night feeling so dark inside about a particular person or place, that the mere mention of their name or state can provoke such an emotion. Catholics believe if you lack remorse or empathy, you're sinning. However, sports can be a breeding ground for "Hate". It is sometimes filled with an obnoxious fan base and filthy mouth banter between competitors. You find a long history of heroic players sticking a fork in the opposition's heart, crushing their hopes of ever winning a championship.

Going into this game I couldn't wait for the bell to ring! I was ready to bang!  You never try to look ahead on your schedule as a ballplayer, it's one game at a time, and always respect the process and your opponent. Tom Brady and the 2007 Patriots, weren't just anybody. They were the Gold Standard.   Brady gave us the blues and unfortunately, we had a loud-mouth young safety who went by the name of Anthony Smith out of Syracuse. Smitty made a horrible mistake leading up to that game. He wanted Tom Brady and the Pats to know that the Pittsburgh Steelers were coming to skull fuck the living shit out of them and there wasn't a thing they could do about it.  Not smart at all.  Tom Brady kicked the shit out of us and every time the Pats scored, Tom Traffic made sure to find Smitty and let him know how much of a dumb ass he was for opening his mouth. We all had to bare that ass whooping. Walking onto that field, you knew you were in hostile territory.  As much as I couldn't stand these assholes, I respected their game. The Patriots played a 3-4 defense just like our defense.  Mike Verbal and Ty Warren had me in their sights and I was ready to chew through their chests. Teddy Bruschi hated me and the feeling was mutual.  We went back and forth the whole game just raining filth at each other. I talked about his momma to his square ass head.  Mike Verbal would chime in and tease me about my teeth and weight. Those were the good old days. But there is just one Patriot that haunts my memories, the scumbag #37 Rodney Harrison.

It's the middle of the game and we are grinding it out trying to establish some type of run game and give our defense a break.  The game is getting away from us and it's starting to get chippy. It's a cold rainy Sunday night and humble pie is being forced through our face mask. We break the huddle, the ball is on our 30 and we need something to happen fast. This is a grown man's game and the Patriots are looking to make it hurt. 36 power was the play call. We are snapping the ball on one. My assignment is a tres-block which is a combination block with me and the tight end to the backside linebacker. We are pulling the left guard around to go get the front side linebacker. Our running back fights and digs to pick a couple of yards. The play comes to a halt.  As I am standing over the pile looking to help my running back get up off the ground, I get the holy spirit knocked out of me! Now I am on the ground and all I could think is, who the fuck hit me?? Sure enough, I look up and Rodney Harrison is standing over me calling me every name but the child of God. I pick myself up and chuckled, he got me. It's a known rule in football, don't get caught standing around the pile, but now all I care about is fucking Rodney Harrison up. I spend the rest of the game trying to clean his ass up. However, the opportunity never presented itself. I got, got! 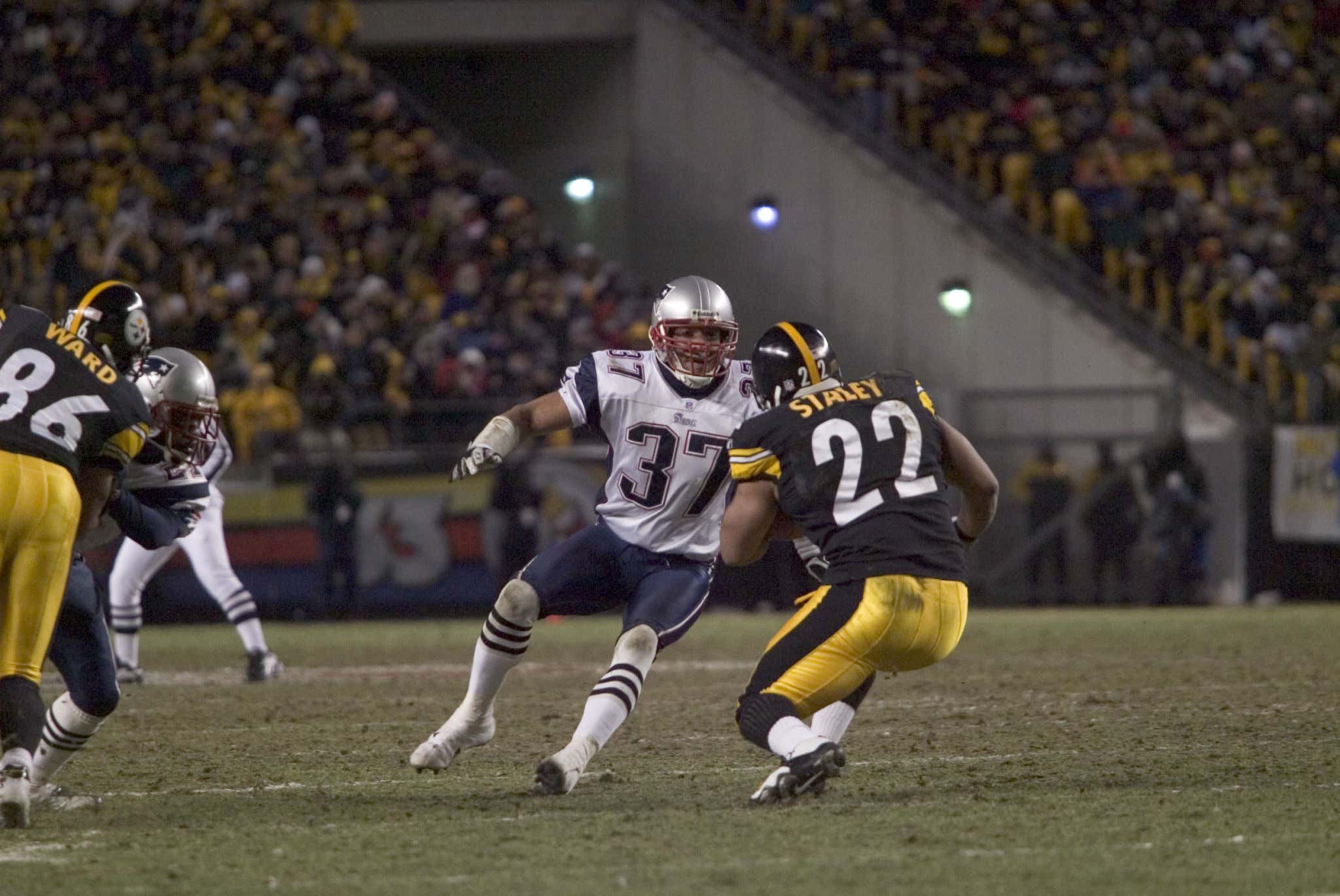 When we returned back to Pittsburgh licking our wounds, Coach Tomlin gave us the real.  He started by telling Smitty he's a dumb ass. If you're gonna write a check, make sure you write that check with only your name on it, not on behalf of the Pittsburgh Steelers. The next gem he gave us was the most important in my eyes. He broke down the game film and showed us exactly what a Super Bowl contender looks like and what a pretender looks like. We were the pretenders and it wasn't even close. The standard is the standard in Pittsburgh, Super Bowl, or bust.  As we sat in the team meeting room salty as the Jordan Sea and embarrassed by the outcome of that game, Coach Tomlin wanted to make one thing clear, we are a team that takes pleasure in making other teams tap. It's in our Steeler DNA to always be the more psychical team. The Patriots weren't only just as physical but smarter. They didn't beat themselves. We had penalties, mental errors and the worst thing about it all, they made us tap.  Dec. 9th, 13-34 was the final score, Pats win, Ouch

Now I never got my revenge, 2008 Rodney Harrison wasn't on the field when we went back up to Foxborough to play the Pats. We beat those assholes that game, but I was bitter. Rodney Harrison called it quits in 2008 and officially hung it up in 2009.

The NFL schedule is currently out and the Pittsburgh Steelers have the hardest schedule in the NFL,  on January 3rd, a Monday night, I pray my beloved steelers have as much hate and revenge in their hearts as I did for Rodney Harrison.  They need to make up for the débâcle they displayed last year against the Browns. That loss handed the Browns a playoff win and sent the Steelers home questioning the state of their franchise. I was more concerned for my brother Big Ben. He has owned the Browns for a very long time. If this is his last go at a chance at number seven, I pray he gives them all hell.  Eat shit, Cleveland! Super Bowl or Bust!