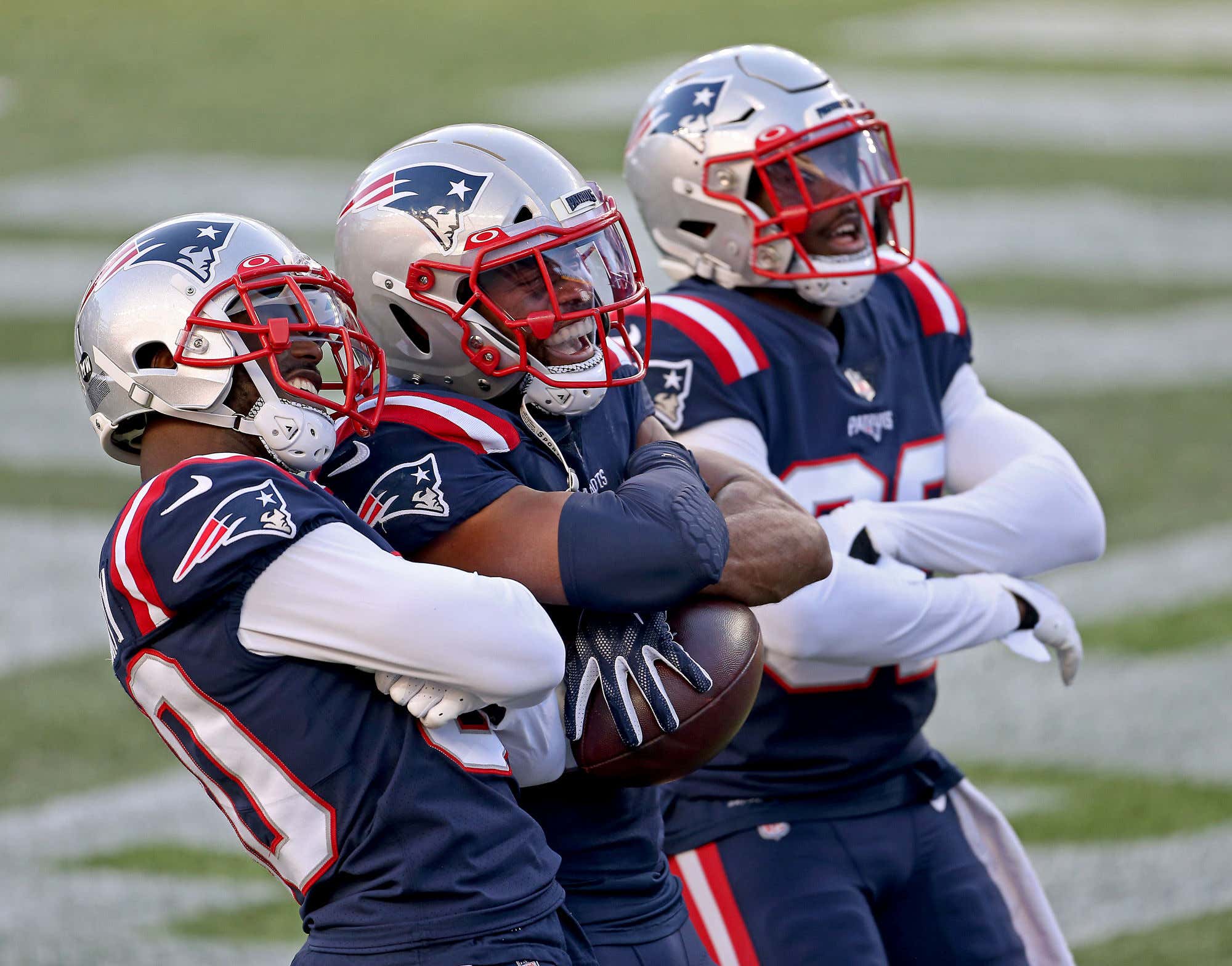 Positional Overview: For the last several years, the secondary has been a strength of the Patriots, and safety in particular has been a reliable spot of high end talent and depth. In 2018 and '19, Pro Football Focus had the defense graded second in overall coverage, before dropping them to the middle of the pack last year after losing Duron Harmon to free agency and Patrick Chung to his opt out. Adrian Phillips was a nice addition in the middle, replacing Chung as the in the box "Rat." Kyle Dugger flashed the athleticism that made him their first pick last year, though he's very much a work in progress after rolling off the assembly line of that legendary football factory, Lenoir-Rhyne. Jalen Mills was a quality pick up as that versatile, play-anywhere, gameplan-specific hybrid. And Devin McCourty remains my choice as the second best (all things considered, like longevity, availability and leadershipity) Patriot of the Dynasty era. But McCourty is 33. Each of the last two offseasons, he was at least in the same conversation as the words "considering" and "retirement," whether or not there was any validity to the speculation. And given this is a team that not only plays a base nickel, a lot of dime and probably plays as much if not more Cover-1 and Cover-0 in the NFL, this will never not be an area of some need. Not to mention, last year this defense was in the bottom third of the league (and I'm being kind) in pass rush. So safeties with the skill set to take away the deep routes as well as come up in run force are a necessity.

As far as this years class of safeties, it's sort of an eye-of-the-beholder thing. There's not a lot of top-end talent, but there is a strong middle class. And at a position that is becoming more and more specialized, with more designations than just the old free safety/strong safety designations, teams who know what they're type is can definitely find someone to give the Final Rose to. To help those teams (because as Mr. Rogers said about times of crisis, always look for the helpers, and that's me), I'll try to categorize where I think these guys are best suited as well as I can.

The Most Likely (and Probably Only) 1st Rounder:

As long as we're making "The Bachelor" references, if you're looking for that "wow factor" first impression, Moehrig is the one you want to see stpping out of that limo. He's got the size and frame you look for in a pro safety. The converted corner got significant reps as a freshman, being named the Horned Frogs Special Teams MVP, then started pretty much ever since, winning the Jim Thorpe award this year. He's an intelligent leader type, making all the calls from the back end of the Gary Pattterson's scheme and showing a lot of ability to read stem routes. He's also dropped down and played some press. He's a sure, reliable tackler, even if he's not explosive. But his real strength is demonstrating his elite ball skills in man, where he's the best in this group. You could easily see him as a Cover-1 defender covering all 53 1/3 on the top of your secondary, or as the middle of the field guy in a Cover-3. He's never been hurt, a rare find at this position. If any safety comes off the board Thursday night, it will be Moehrig.

Compares to the other leading brand: Justin Reid

Holland is one of those guys who'll be hard to evaluate. He opted out, which was of course his option ("opt" being right there in the noun), and then followed up his season off with an incredible Pro Day. He not only posted that 40 time, he added a 35" vertical and a 10' 6" broad jump. He would've been the star of his day at the Indianapolis Debutante Ball. It's just that NFL scouting is very often a film game, and you have to go back to 2019 and find where all that athleticism showed up. And it did for much of his two seasons as a starter, where he combined for nine interceptions, many of them coming face up to the offense and breaking on the ball. In fact, he might have the best instincts for tracking the ball from a backpedal and closing on the pass in flight. Where he has issues is staying in coverage with his back to the pass, and he might be a guy who projects best as a nickel type. Regardless, he can contribute right away as a punt returner, where he averaged over 14 yards per return.

Compares to the other leading brand: Minkah Fitzpatrick

Johnson wasn't a starter until last year, when an injury to Marcelino Ball gave him the opportunity and he made the most of it. On the season he finished with 43 tackles, 3.5 for a loss, one sack, eight passes defensed and four interceptions. Most impressively, two of those picks were off Justin Fields. Some sites have him as the number two safety in this class, others are not so sure, due to his less than impressive speed. I have a hard time thinking the Pats would be interested since his 3-cone was an average 7.22. They can overlook someone's straight line speed, but asking Belichick to go for a guy without an impressive 3-cone is like asking Hef to date a brunette with all-natural A-cups. He's probably best suited to be a half-field safety for a team that relies on a lot of Cover-2.

Compares to the other leading brand: John Johnson III

LeCounte is a guy who probably benefited from there being no Lucas Oil Olympics, because his game film makes him look like he's two inches taller, 20 pounds bigger  and .10 faster than he measures. So do his immeasurables. A five-star recruit, he made an impact as a freshman, then established himself a team leader shortly thereafter. He came back to Georgia for a senior year, and posted 26 tackles, three picks and four passes broken up in just five games before a motorcycle accident messed up his shoulder and ended his season. He made all the calls in the Bulldog's secondary, and is a cerebral, high-IQ, high-effort guy with instincts to read quarterbacks and react to passes as the ball is being released.

Moehrig's secondary mate is perhaps the most polarizing safety in this draft. Proving that not every undersized sidekick is as beloved as Robin the Boy Wonder, Garth from "Wayne's World" or Andy Richter. Some see Washington's production as NFL caliber, others see his shortness as, well, a shortcoming. Combine it with that 40-time, and that's not a lot for scouts to go on. As a redshirt freshman, he played a back half of TCU's defense, and even with limited playing time put up 46 tackles and five interceptions and got himself into the draft conversation. But this past year, he made nine starts without a pick. His size will automatically eliminate a lot of teams, who'll see him as a matchup they're losing no matter who they put him on. Others will see he's a relentless, high-motor, short area tackler with a 37 1/2"  vertical and 10' 7" broad jump that makes him play above his size. A guy whose tape far outmatches his measurables, he'll be an interesting test case, but probably will max out as a down low nickelback.

Compares to the other leading brand: Budda Baker

Sort of a positionless, subpackage, strong safety/linebacker in the mold the league is trending toward, Nasirildeen is the best run defender in this group, with NFL-ready tackling skills from Day One on the job. He's better suited to playing in a confined space, what scouts sometimes still call "the telephone booth," because I guess terms like watercloset and nickelodeon finally got too dated. Anyhoo … he matched up well against tight ends at the Senior Bowl, but you're probably going to want him taking them on slants and curls, then passing them off to safeties on seam routes. He missed some time with an ACL tear, which should make him drop some. But still, for a team looking for an enforcer type who'll give them a physical edge and can find a position for him, he can be an effective Big Nickel/extra linebacker presence.

Compares to the other leading brand: Isaiah Simmons

Considered the best zone coverage safety in this group, with high-level awareness of route development and the closing speed to play in the time of matchup zones that Nick Saban and Bill Belichick first worked on in Cleveland during the Bronze Age, Grant stood out at the Senior Bowl running 1-on-1 drills with the best wideouts in the country. He's disciplined in coverage, making the kind of quick baseball-type hip flips to stay with receivers running double moves on him. If anything could stand improvement, it's his tackling. He's not exactly Euclid when it comes to taking angles on ball carriers in the open field and while he's aggressive in run force, those angles sometimes get him lost in the wash. For those reasons and having decent but not elite size, he's best suited to a single high safety role or in Cover-3 cloud coverage.

Compares to the other leading brand: Tedric Thompson

Probably the second best coverage free safety in the Class of 2021. He's another guy who'll be hard to slot, as he opted out after just two games. Still, in just 24 career games, he managed to rack up 13 interceptions, a testament to his ability locate a ball, change direction and close. If anything, he might be too much of a ball hawk. The sort of guy every song in the '60s and '70s celebrated as a guy who's ramblin' when he's not gamblin' (apostrophes required). So there's a high risk that comes with that reward and he'll have to be coached up to not let every decent veteran QB get him committing with pump fakes or just their eyes. Still, he's got the broad shoulders and narrow lower body that makes scouts get the vapors. He should be an interesting test case in just how much pro personnel departments hold opt outs against these guys.

Compares to the other leading brand: HaHa Clinton-Dix

Any guy who's name, loosely mistranslated means "holy devil" can drink from my canteen any time. According to NFL.com, his parents gave it to him in honor of a grandfather and to balance out the last name. Works for me. A four-star wide receiver prospect, he played both ways a freshman, became a full time starter as a junior, and in his senior year totalled 55 tackles, with tow for loss, four interceptions and four PBUs in nine games. He plays undisciplined and a little sporadically. But with some refinement he could use his size to be an asset, particularly in a Robber role.

Compares to the other leading brand: George Iloka

Perfect Patriot: Besides the obvious choice of Trevon Moehrig, who's the Best in Show, I'll have to go with Richard LeCounte III. He comes from one of the Pats favorite feeder programs. He checks all the boxes as far as outplaying his measurables and being a tough, cerebral leader. It's hard not to see them grooming him to be the next D-Mac.

Whom they'll draft: LeCounte. Assuming he falls down to the late 2nd or 3rd thanks to teams who prefer their draft picks be more impressive standing in shorts getting their heights and weights taken like it's a school physical. LeCounte the guy.