We all know Roy Williams retired yesterday, it was the biggest news in sports. But now we're seeing the fall out of it all. There was this story that part of the reason he retired was being pissed about the transfer portal and NIL. I'm not quite sure why he'd be upset about name, image and likeness that's something that helps UNC. They are one of the 2 or 3 biggest programs in the sport. People will pay to use player's NIL and make it easier to recruit with that. At the same time Walker Kessler announced his decision to transfer within the last week. He was a top-25 recruit and someone who was going to be the future of UNC. But he decided to transfer. His call.

But don't tell UNC fans this. They are LOSING THEIR SHIT on Walker Kessler, convinced he's the reason Roy Williams retired:

And on and on we go. Of course Boeheim had to weigh in and take a dig at Kessler too. Perfect for him being an old curmudgeon. Not to mention Boeheim is losing guys to transfer because he didn't properly give them minutes when he should have. But anyways, this is about Roy and UNC. You're an insane person if you think Walker Kessler is the ONLY reason that Roy Williams retired. Roy is 70 years old with health problems - remember he's collapsed on the sidelines because of vertigo. Sure this could *confirm* why he retired. But this isn't the only reason. This had been a rumor in college basketball world that it was going to happen for a couple of weeks.

Oh and Kessler even put out an IG 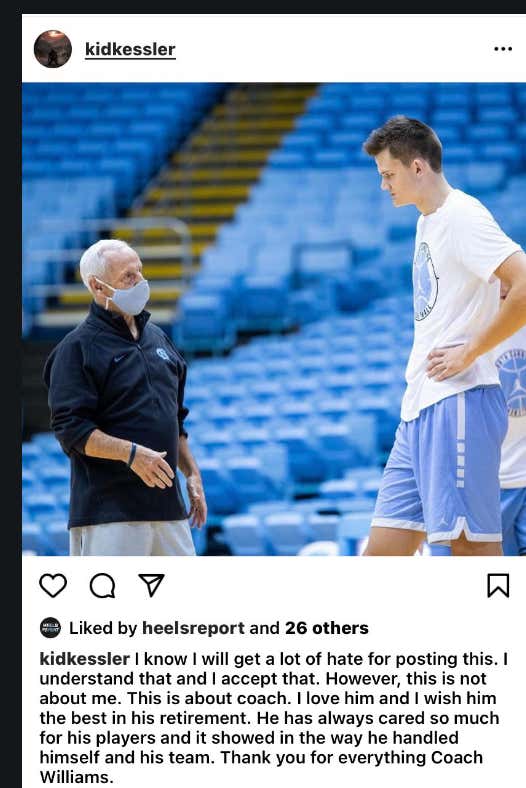 I don't know, maybe just let the kid do whatever he wants? Maybe be upset you've had two below average seasons in a row and Roy retired. Shit happens.