And so we advance in Verdansk. 64 start, 18 remain. Why an Electric Eighteen instead of a Sweaty 16? Well, tomfoolery was attempted, and justice was won: 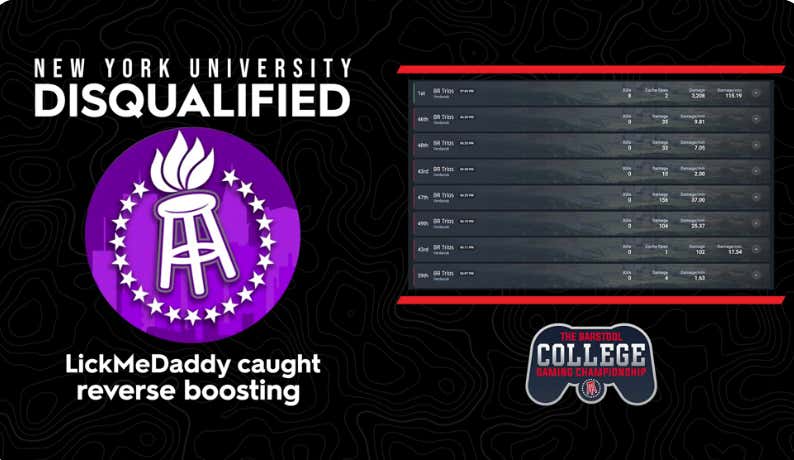 Say it ain't so, NYU! Thank you for taking a break from thinking you're better than everyone else to go out of your way to cheat in a tournament worth nothing Eternal Glory. The Violets (seriously) featuring "LickMeDaddy" (even more seriously) were destined for a dynasty of glory, but alas, they got GOT.

And, yes, reverse boosting is officially cheating. We cleared it up after the last debacle and instituted multiple Broom Rules to ensure what happened in our first tournament never occurs again:

Akin to Icarus, LickMeDaddy just flew too close to the sun. Tis a damn shame. But the ELECTRIC EIGHTEEN is set and we've got many characters still vying for that crown. Including U of Tampa who took care of business EARLY last game by wiping out fellow competitors at CU:

Same went for MSU who dominated one of the better squads at ND during a firefight:

Sleeveless = Jesus on the battlefield. Allegedly.

But can you even get scared if you someway, somehow go to a D-III school in Texas? That's debatable, as we see with my wildcards at Trinity (TX).

And then there's the Dukes at JMU. Always here. Always prepared. Forever dominant.

It'll be exciting to see, for sure. Wednesday at Twitch.tv/barstoolsports. For now, we ride with White Sox Dave and some of the contenders because if you can mindless, dickless, hopeless corpse of WSD to victory in Verdansk, the #CollegeGamingChampionship should be a walk in the park.