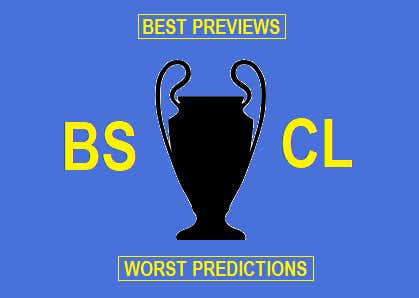 Last couple days of the Round of 16 are upon us. If this week is anywhere near as interesting and entertaining as the previous one then we are in for a treat. Still some close ties to be decided and at least one that is not very close at all

but doesn’t mean we can’t lose some money on it and having fun doing so!

First, though, take a moment to set the mood by letting the sweet sounds of soccer sex wash over you:

So this is what we are looking at this week: 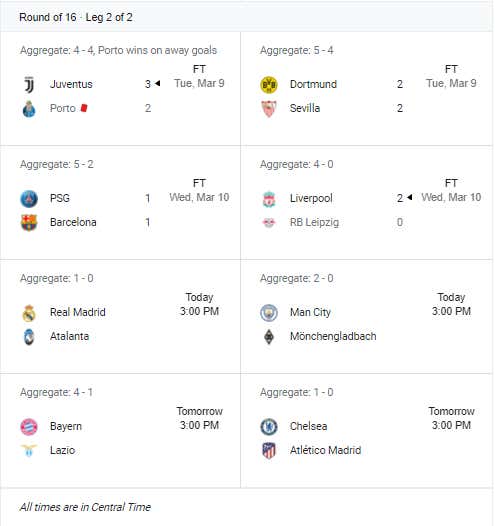 Real Madrid were bailed out BIG TIME in the first game. Atalanta were hamstrung by an early red card from a brain dead ref that ended up strangling every last bit of excitement out of what could have been the best game of the matchday. Thus, this game is going to be a lot of fun. Why? Because the soccergods owe us damit, that's why.

Obviously the Madridistas come in sitting on a big advantage of a 1-0 lead (plus an away goal). If we are being dead serious they did NOT deserve to win the first leg, and were not much – if any – better than 10-man Atalanta side. Yeah, they still have talent galore but the absence of Casemiro in the middle could be huge. Atalanta rested some guys on Friday, notably Duvan Zapata, and if that first leg was a guide it is hard not to think this is a big time upset alert. Besides, I've basically created a once-man cottage industry of doubting Real Madrid in the Champions League and getting burned for it…

City’s ridiculous undefeated streak was finally snapped in the Manchester Dærby proving that they are still mortal, and like I said last time if this was the Gladbach side from October then I would be giving them serious consideration as a viable underdog. As it is though the team has been really going through it lately even since coach Marco Rose revealed plans to head to Dortmund after the season, which seems to have (sort of understandably) sapped the team’s mojo. Maybe they can come together and win one for the outgoing gipper… but probably not. Especially since Pep rested half his squad this past weekend against Fulham. Gladbach will have to throw caution to the wind – not point in playing it safe at this point after all – so perhaps that may end up unlocking City's ridiculously good defense, but my guess is it will come at the expense of shipping a handful of goals themselves.

Lazio got WORRRRRRKED in the first leg despite taking advantage of Bayern’s less than stellar backline to create some opportunities. Bayern’s attack is just too much for them though. I wouldn’t be shocked if this turned into a near carbon copy of the first game.

Chelsea have lost precisely zero games since Tommy Tuchs took over. Defensively they are as good as they have ever been in the last few seasons but where are the goals gonna come from? They don’t seem to know and if they don’t then I certainly don’t. Also keep in mind that Thiago Silva (injury), Mason Mount and Jorginho (both suspended) are all out this week. Tough not to love the odds available for a very good Atletico team that comes in relatively healthy and plenty motivated (as if that is even a question for a Diego Simeone squad). Speaking of Simeone though, the only thing that kinda scares me about Atleti is his penchant for playing way, way, waaaaaaaaaay too conservative. He’s done it time and time again in big Champions League games… but perhaps coming in down a road goal will force him to release the hounds a bit.

Reminder: another big slate on Spursday. Kidding, it’s just Europa (aka the only thing left to live for in North London this season). 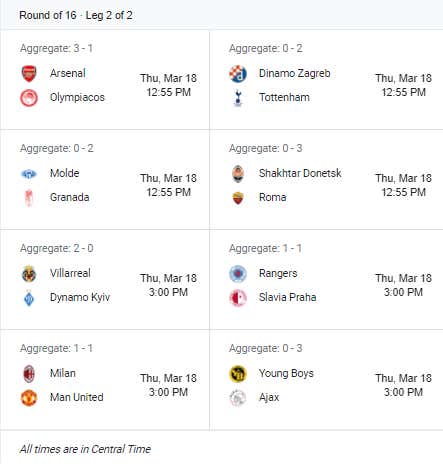