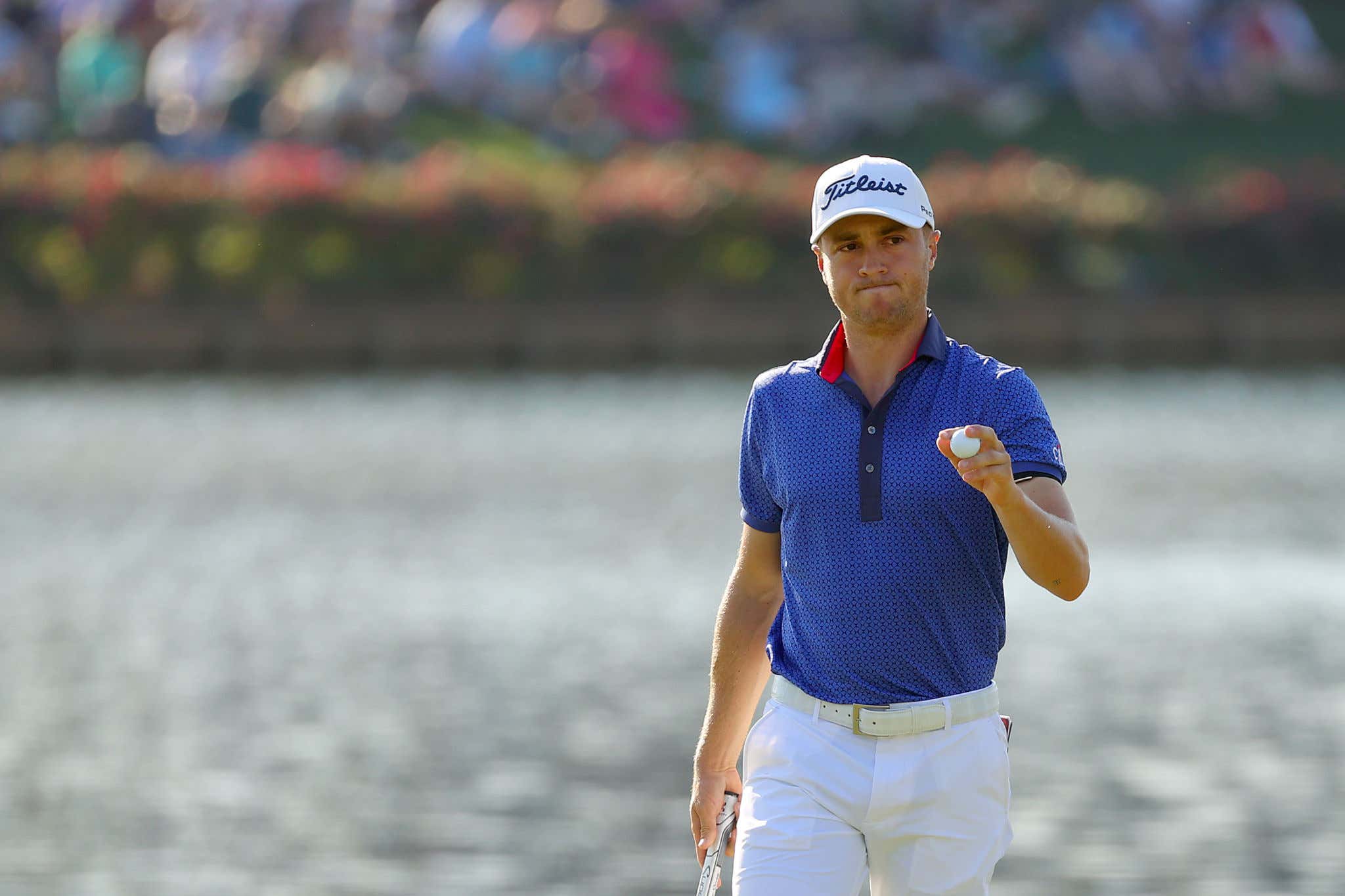 Man what a freakin weekend by JT. The guy's been playing some mediocre golf by his standards for a few weeks since his grandfather passed away. The self-inflicted mistake he made at Kapalua certainly didn't help his cause either. This week started like much of the same with him +1 thru 27 holes and needing to fight his way onto the right side of the cut. He was able to do just that with a 33 in on Friday to sit at -2 going into the weekend. Given that I was out there at Sawgrass on Friday and Saturday, I was just glad that he was going to be around to watch as he played out the rest of the weekend.

Well the Tour set up some gettable pins on Saturday (as they tend to do), and JT came out FIRING. There's few better in the game than JT when he gets going, and he came out with 4 straight birdies to jump into the picture. All of that led to a low round of the tournament 64 and a spot in the 2nd to last pairing on Sunday amongst a packed leaderboard. It was really anybody's tournament for whoever could go out there and take it.

We learned relatively quickly that neither Lee Westwood nor Bryson DeChambeau had their best stuff today. That disaster on 4 was like nothing I've seen before. Somehow those two got out of there with only a bogey and double bogey. Meanwhile we had watched JT hit green after green after green, yet fail to really make a big move because he just couldn't get a putt to fall. At one point the broadcast said that he had hit 20 consecutive greens, but really didn't have all that much to show for it. He was finally able to break thru with a birdie on 9, and another on 10.

It was his eagle putt on 11 that helped him to leapfrog Westwood and he was off to the races.

That put him in control of the tournament, and a player as experienced and talented as JT isn't likely to let it go. He got to Sawgrass' signature finishing 3 holes with a 1-shot lead and that's where he started to flex. The sling hook stinger (or whatever the hell you want to call it) to pierce a headwind on 16 was straight NASTY.

He nutted a 5 wood pin high on 16 and cleaned up his 2-putt birdie to move his lead to 2 strokes. JT tore up the par 5's this week. That's the name of the game at a lot of courses, but what he did this week was insane. He was -14 for the tournament overall. He was also -14 on the 16 Par 5's he played this weekend. Just pure dominance.

He played the safe shot on 17 and made the clutch 2nd putt to make par.

Then at 18 he went back to the sling hook… so saucy and made for some great theatrics as we watched the ball flirt with the drink.

This marks his 14th PGA Tour win at the young age of 27. He's got a major championship, a FedEx Cup, and now a PLAYERS Championship to his name. That's damn near close to a Hall of Fame resume already, and his best golf is probably in front of him. He's joined some pretty special company at his age.

If there's one more thing to add about this tournament, it was how tough a day it was for Lee Westwood today. He definitely just didn't have it today. The mistakes on 2 and 4 were brutal and it looked like he was fighting his swing all day. At one point he caught JT on the back 9 for a brief moment with a clutch birdie on 14 and I couldn't believe my eyes. It didn't feel like there was a single hole today where he wasn't grinding. It's definitely disappointing for the 47 year old to fall short of a win for the 2nd consecutive week, especially a win that would have been career-defining. However he's definitely continued to show that he continues to be a factor in big time tournaments and I'm fascinated to see if he can take a run at Augusta in a few weeks.

What a great week. Unbelievable golf course that delivers every single time. Congrats to JT on yet another big W.