Kansas City.com - A Missouri pastor is on leave after delivering a sermon telling women to lose weight and submit to the sexual desires of their husbands to keep them from straying.

“Now look, I’m not saying every woman can be the epic — the epic – trophy wife of all time like Melania Trump. I’m not saying that at all. Most women can’t be trophy wives, but you know ... maybe you’re a participation trophy,” Clark said as a photo of the former first lady appeared on screen. “I don’t know, but all I can say is not everybody looks like that. Amen! Not everybody looks like that. But you don’t need to look like a butch either.”

First General Baptist is a church in the General Baptist denomination, which released a statement Monday saying Clark’s sermon was “not consistent with the positions and values” of the organization. ...

Clark includes one Bible verse in the sermon — which he told husbands in the congregation to display on the headboard of their beds.

“The wife has no longer all the rights over her body, but shares them with her husband,” he said, quoting the verse. “So whenever she’s not in the mood, dig out your Bible.” ...

Here are a few more quotes from Clark’s sermon:

“Why is it so many times that women after they get married let themselves go? Why is that? Why do they do that?

“Men have a need for their women to look like women. Sweatpants don’t cut it all the time. Wearing flip flops and pajamas to Walmart – that ain’t going to work. Ain’t nothing attractive about that. It’ ain’t. And men want their wives to look good at home and in public, can I get an Amen!”

“Ladies, it’s the way God made us. It’s the way we are. Men are going to look. He made us to look. You want them to be looking at you. Don’t let yourself go.”

"Let me tell you something. I have a friend. He has put a 'Divorce Weight' on his wife. That is how important this is."

“Listen ladies, we are not lust monsters. We’re not that lust monster that chases you around the bed every night. We can’t help ourselves. God made us this way. He made us this way. Listen can I just tell you this? This may never pass your mind when you’re saying ‘I do,’ but I’m going to tell you it does his. It’s the main reason he married you.”

Ladies, ladies, ladies. Now, let's not get hysterical here. Just calm down, OK? Let's not get your panties in a bunch. Just because Pastor Stewart-Allen Clark told you it's your sacred duty to look like Melania Trump and not all frumpy, is no reason to fly off the handle and get all irrational, amirite? Besides, you know how you get. One little upset and you run off to the kitchen for some ice cream therapy and that just defeats the whole purpose of his message.

Look, we can quibble about whether or not his sermon was about what God wants or what Pastor Hyphenated here wants. I'm no Bible Scholar, but as far as I know there's no Old Testament passage about "The wages of sin are fat thighs." To my knowledge Jesus didn't say "Blessed are the Pilates instructors" in the Sermon on the Mount. Nor am I aware of him telling the parable of The Prodigal Hottie, slaughtering the fatted carb.

What I do know is that people who've studied these things say something very different from the good Pastor here. That Jesus preached the opposite of this sermon, which made Him very much unique for His time.

For Christ, women have an intrinsic value equal to that of men. Scanzoni and Hardesty point out that “Jesus came to earth not primarily as a male but as a person. He treated women not primarily as females but as human beings.”3 Jesus recognized women as fellow human beings. Disciples come in two sexes, male and female. Females are seen by Jesus as genuine persons, not simply as the objects of male desire.4 Hurley believes “the foundation-stone of Jesus’s attitude toward women was his vision of them as persons to whom and for whom he had come. He did not perceive them primarily in terms of their sex, age, or marital status; he seems to have considered them in terms of their relation (or lack of one) to God.”5

So, like First General Baptist, I'd appreciate it if everyone would not put that ragtime on MY Savior, thankyouverymuch.

But that's beside the point. What's more important here the underlying message of the sermon. And that is, what is it you women would rather get into? The Kingdom of Heaven, or Pastor Stewart-Allen Clark's 44-inch elastic-waisted jeans? 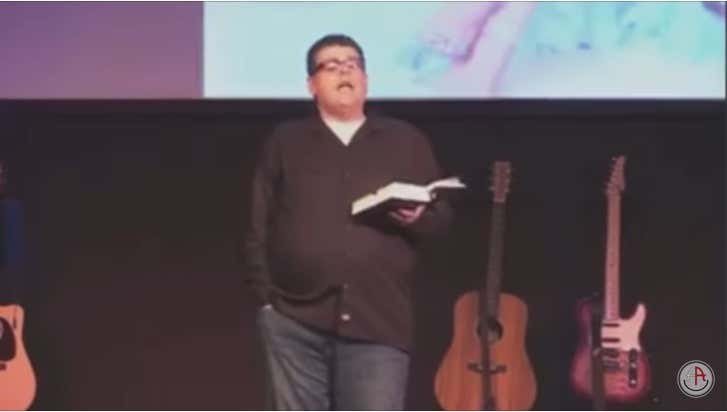 You don't land a catch like this letting yourself go. Sweatpants and pajamas and flip flops at Walmart are not gonna cut it. It'll take effort on your part. Make up, perfume, nice dresses and all your best girly finery 24/7, or else this honeydripper will slip right through your unmanicured fingers, there Ms. Butchy. He'll end up in the arms of the next Melania Trump who gives a damn enough to keep up appearances. His buddy's wife might have a Divorce Weight, but he hasn't reached his yet.

So you better work it Sister, if you ever expect to see the Bible quotes on his bed's headboard. Men like him don't grow on trees. They can be found only on the pulpit of First General Baptist and Bobby Moynahan's Drunk Uncle sketches. You have to fight with all the other hot babes to get one. And that competition will be fierce. God might only care about what's inside you. But this Sex God is only interested in your outside.