Crains - Sure, it sounds cool enough: Decking over the unsightly train tracks skirting Soldier Field and creating an entirely new neighborhood studded with shiny high-rises, restaurants and shops is an appealing daydream.

That said, the One Central idea pitched by sports-stadium-builder-turned-would-be-neighborhood-maker Bob Dunn seemed like a stretch even before the pandemic. Indeed, the Wisconsin developer's audacious proposal seemed to fade from view since it last made the rounds in 2019. But it just turned up like a bad penny, when Ald. Pat Dowell, 3rd, hosted a virtual town hall on the evening of Jan. 25 to allow Dunn to describe a more detailed version of his plan.

Dunn now wants to build up to 22.3 million square feet of apartments, shopping and a transit center on 31 acres decked over Lake Shore Drive and Metra Electric tracks, all funded in part by $6.5 billion in state financing. As Crain's columnist Greg Hinz reported in advance of the meeting, the development would be anchored by a $3.8 billion transportation center that would include stops for Metra and Amtrak trains, and a spur line over to the CTA's Red Line. Dunn notes that the transit center would become public property in 20 years under his plan. The first, $3.8 billion phase of construction would include the transit center and 3,500-car parking garage, plus 1.5 million square feet of "urban entertainment, dining and retail." The next phase, pegged at $16 billion, would feature a series of large high-rises on the west end of the development site.

Dunn asserts that public investment would pay for itself many times over, with $59.9 billion in "new tax revenues and other economic impacts" for the state, $59.9 billion for the city and $14 billion for Cook County. Those figures come from an analysis prepared for the developer by AECOM, an engineering firm—a study Dunn paid for. 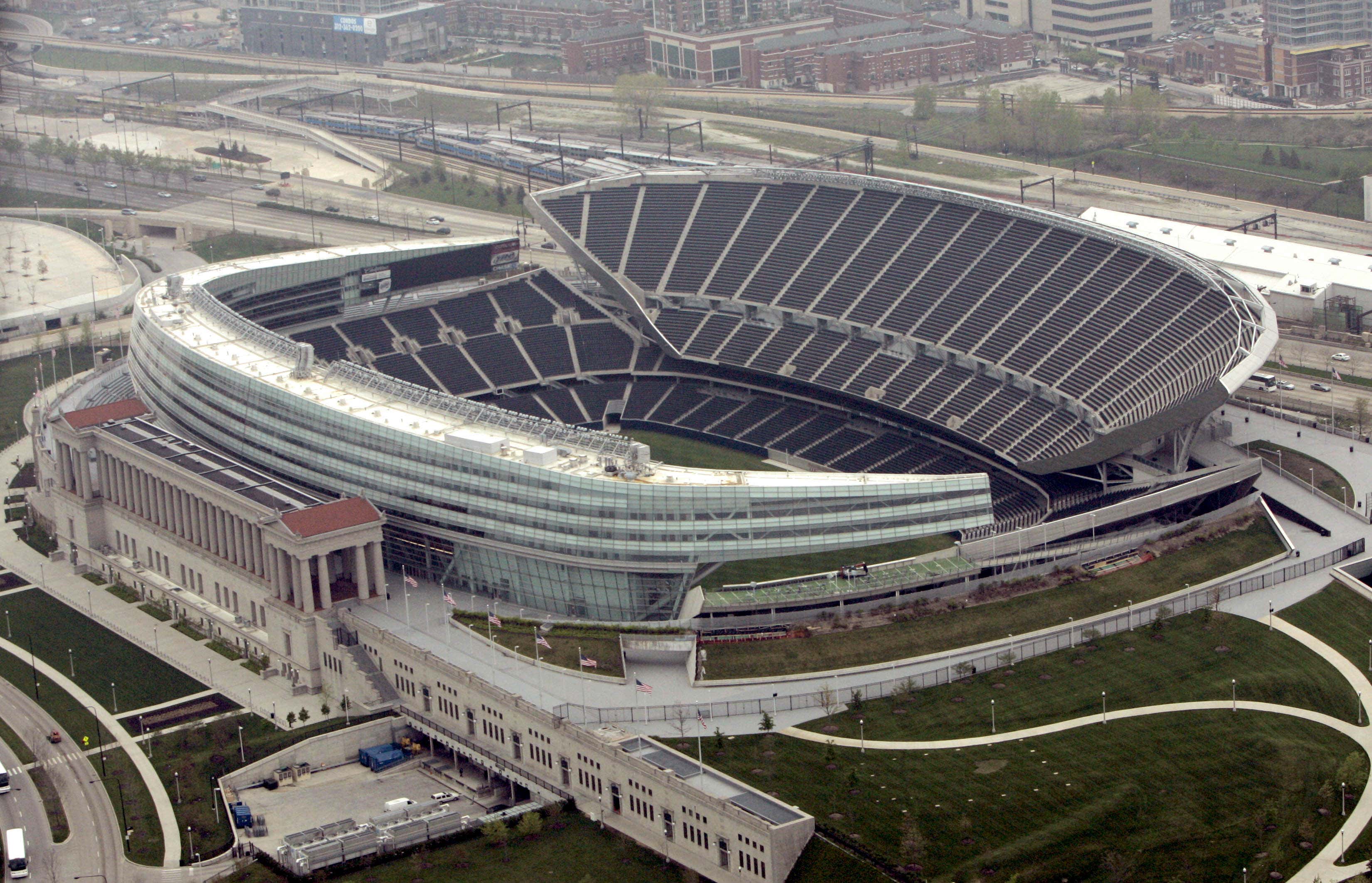 I just spent twenty minutes digging through legal images of Soldier Field to use that depict the "scenery" around it for those of you that haven't had the privilege to visit the stadium in person. And more importantly the rail yard eye sore to the stadiums'  adjacent west. 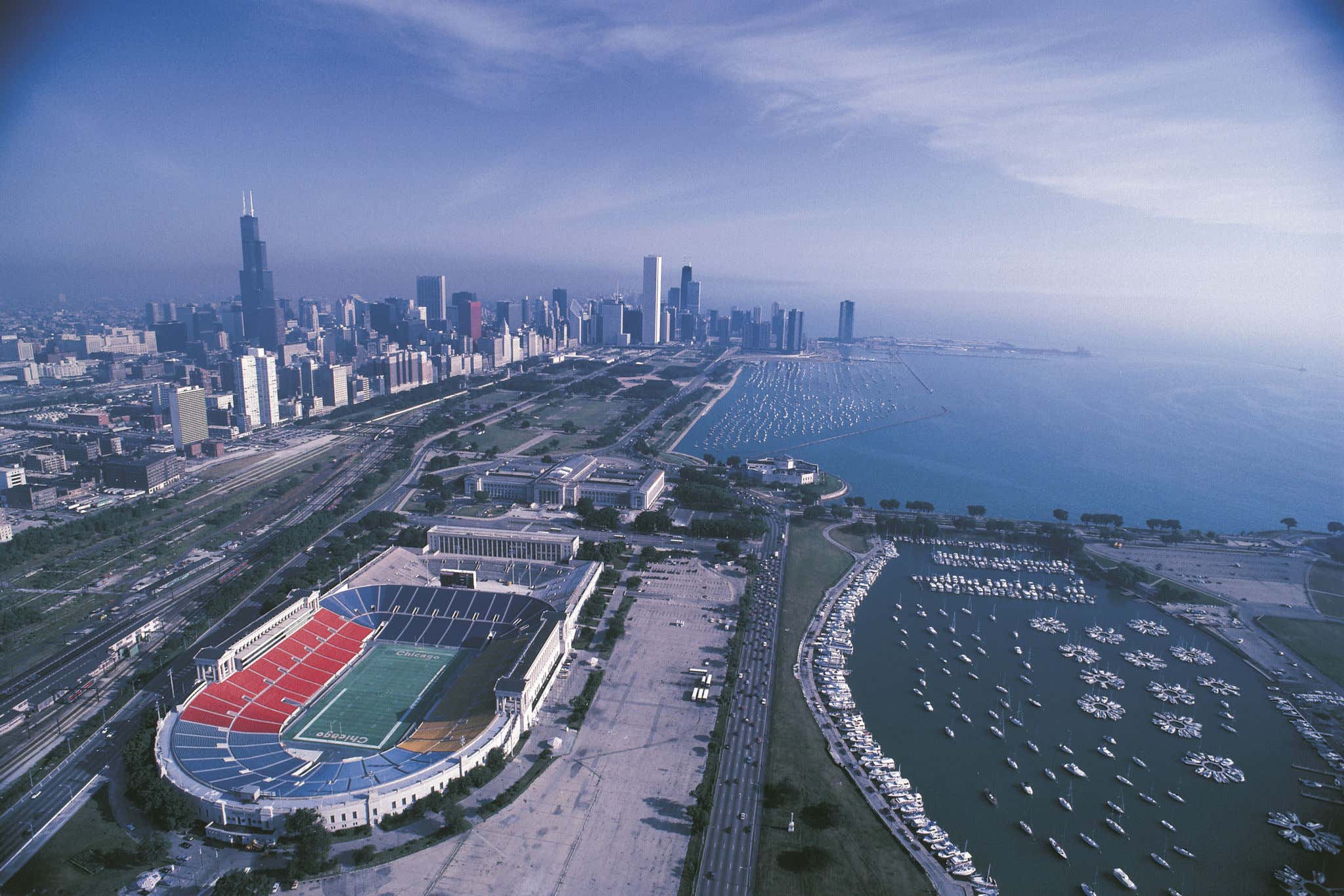 You only ever see her from the East/Southeast. With the lake, the boats, and the skyline behind it.

The rail yard next to the stadium isn't just an eyesore either. It's a pain in the fucking ass.

There's not much worse than tailgating at a buddy's lot that doesn't happen to be in Waldron. You have a fucking hike to get to the stadium and that concourse to get over the traintracks is a bitch. Especially when you consider 9 times out of 10 you're making that trek in the winter elements (- temps and hurricane force wind chills off the lake) or in the summer for concerts (90s-100 + humidity).

You can always pay a rickshaw $250 to take you if you roll like that, but if you don't have the funds you're schlepping it up. And nothing sobers you up quicker than exiting the stadium and realizing you have a 2.5 mile walk back to civilization.

This plan makes all the sense in the world not just because it will alleviate the horrible look around the stadium but it will also give plenty of pre-game options in a spot where if it weren't for Guaranteed Rate would definitely be the worst sports entertainment venue in the city.

Soldier is home to some amazing tailgating (unless you're comparing it to Lambeu, First Energy, or Rich Field). But if we're being honest, it's in the middle of a bar and restaurant desert.

The lakefront beauty surrounding it is a blessing and curse. It's all untouchable park land so the nearest bars are miles away over in the South Loop. And to make matters even worse, the Bears pre-game mainstay The Scout closed down this past year. Really depressing news. We've still got Kroll's (and their fire burgers btw) though luckily.

For those Chicagoan's that have been to Xfinity Live in Philadelphia before, during, or after an Eagles game can you fucking imagine if we had a bar area like that right outside Soldier Field? It would be the greatest Sunday party you'd see from September - February.

And not just during football season.

The South Loop is and has been exploding residentially. South Michigan Ave/Motor Rowe is the next "hot neighborhood" according to my hotshot realtor buddies.

The current and future residents over there need restaurants, bars, entertainment.

And the city needs to rebuild its fuckin tax base.

Yah I know this guy Dunn is looking for $6.5 Billion in state financing but that's rule #1 in negotiating. You ask for the moon on your first offer. Ever heard of countering Greg Hinz and Crains? Read a book for me one time.

That figure will come way down and plus the developer only wants the land for 20 years. Then it'll become the city's. It will carry with it a projected $59.9 billion for the city and $14 billion for Cook County in tax revenue which is kind of a big deal as well as boosted infrastructure for the Metra and Amtrak.

And I know it makes far too much sense and for that reason, I'm not even going to propose it, but if it didn't make sense I would say Chicago's officials should look into this as a potential site for the mythical casino they keep debating on doing. It will be 2031 and they'll still be arguing on where to put their downtown casino so if you're thinking "this project will take too long to complete, they need the casino, the jobs it will create, and the tax revenue asap" you're incorrect.

8 guaranteed weekends a year you’d have 60,000 depressed and despondent staggering around like that scene in Saving Private Ryan,

filing out of Soldier and walking right onto your casino floor to lose away their sadness.

That my friends is called shooting fish in a barrel.

But just imagine a decent casino, next to an Xfinity Live type venue, or just a handful of nice bars right outside Soldier.

p.s. - Moved here post renovation and never really understood why everybody hated it so much. I thought the new Soldier Field was always amazing. Great place to watch a game. Great home-field advantage from a fan perspective. (Fuckin awful for the players, the field itself is one of the worst in sports). Great concessions, beer lines aren't too bad. I love the place.

Then a few years ago somebody was telling me about the high school games they use to play there like 100 years ago and that they'd draw 115,000 people. For a high school football game. I looked up old pics 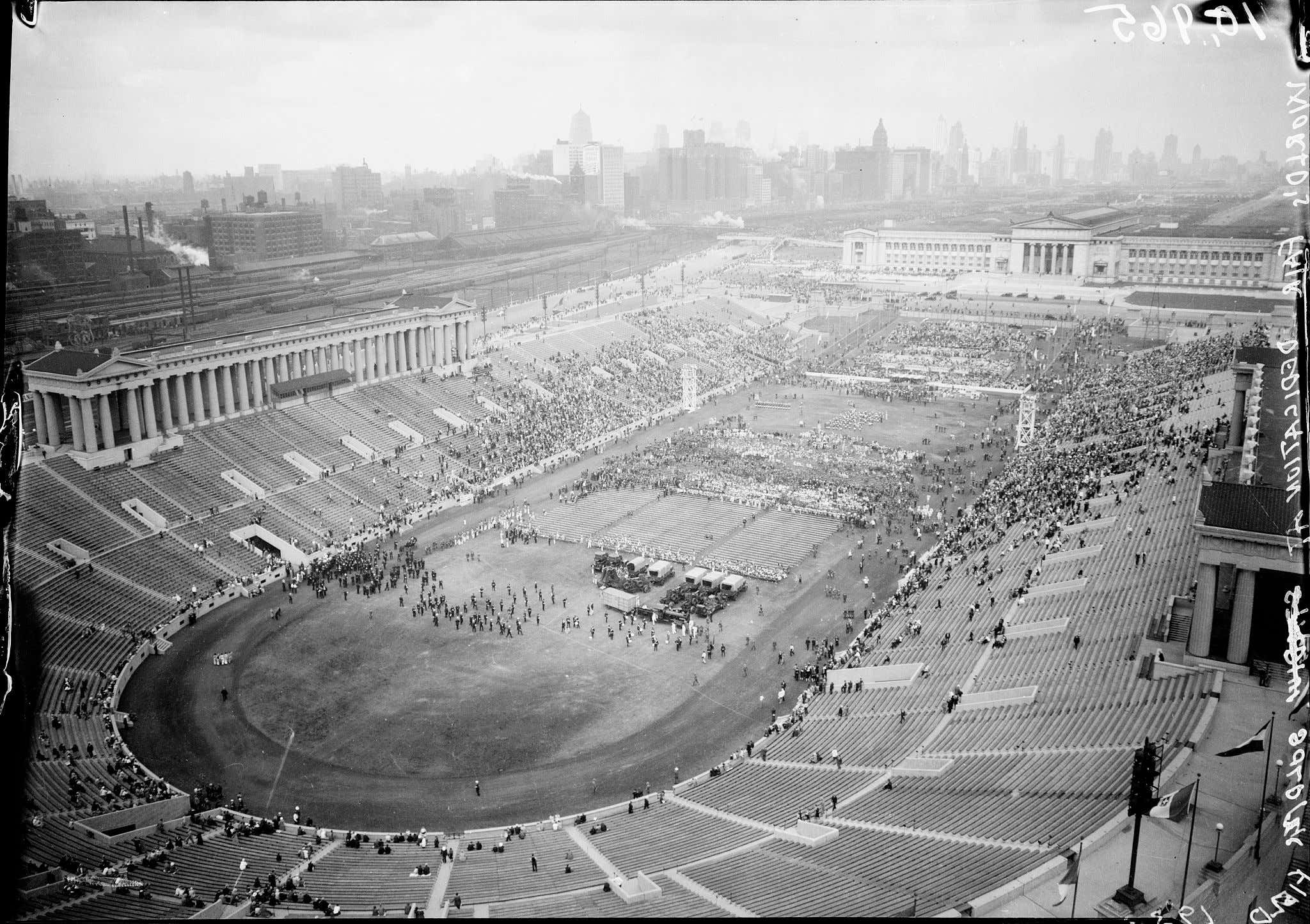 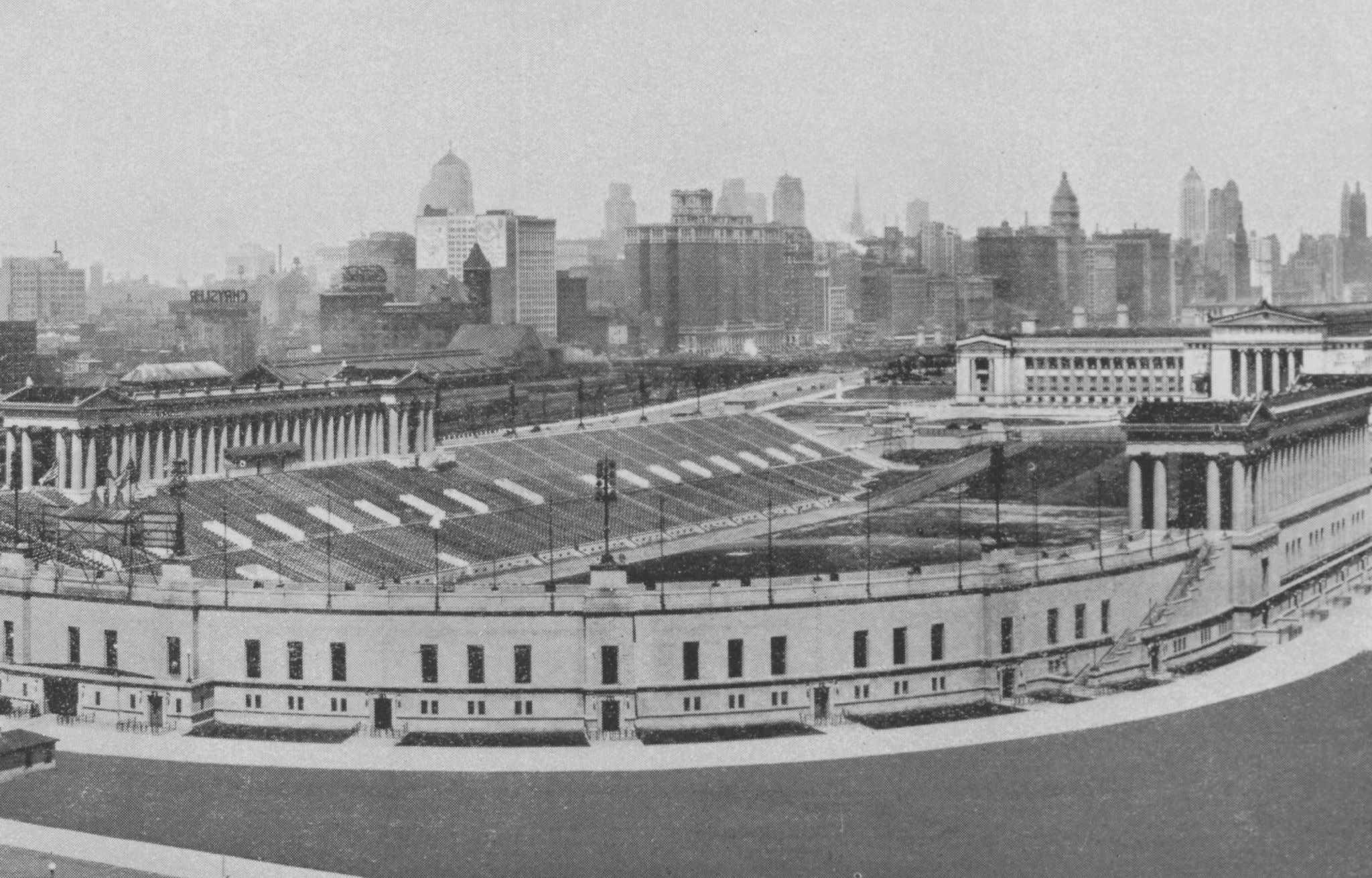 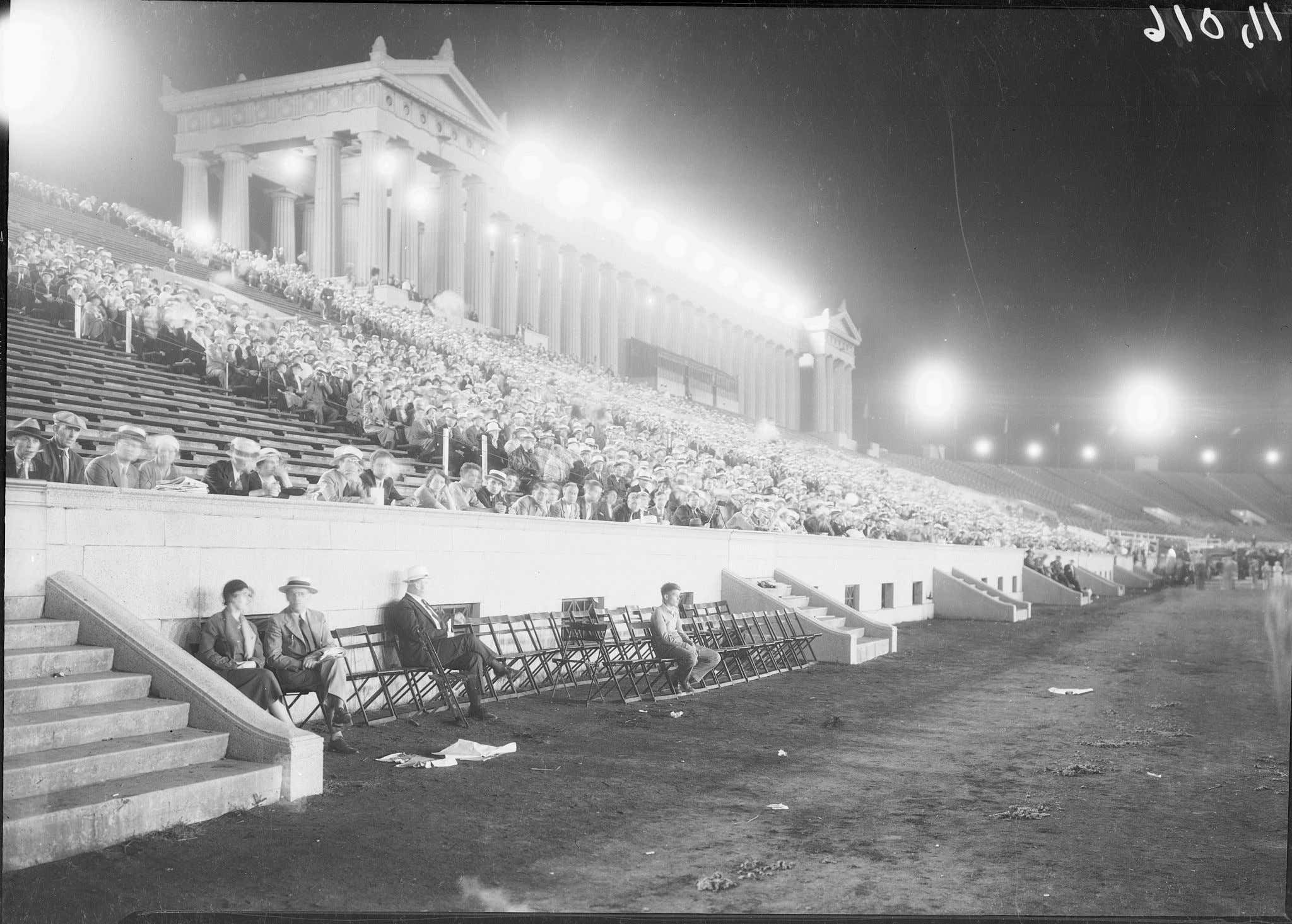 It was also so big they used to hold Ski Jump events at it.

and then I got it. The place used to be unreal. Those beautiful monument pillars all around it, and the upper bowl that was like two or three times the size it is now. Incredible stuff.