Last week I wrote a blog about the crazy world of NBA Top Shot highlights. It's a wildly addicting, fun, insane phenomenon that makes little to no sense. Again, we're talking non-exclusive highlights that are being treated the same way as baseball cards you used to collect. It also is wildly profitable and that's all that matters! Since I've written that blog it's only gotten bigger. WAY bigger.  Look at this growth in the last week in the above graph.

Now we're starting to see lots more NBA players get involved. Is this genuine interest in block-chain trading and an exploding market or is Top Shot personally reaching out to these guys to get them in the game and promote their product. Might be a combo of both, maybe some insider trading, but I'm not complaining. It's working. 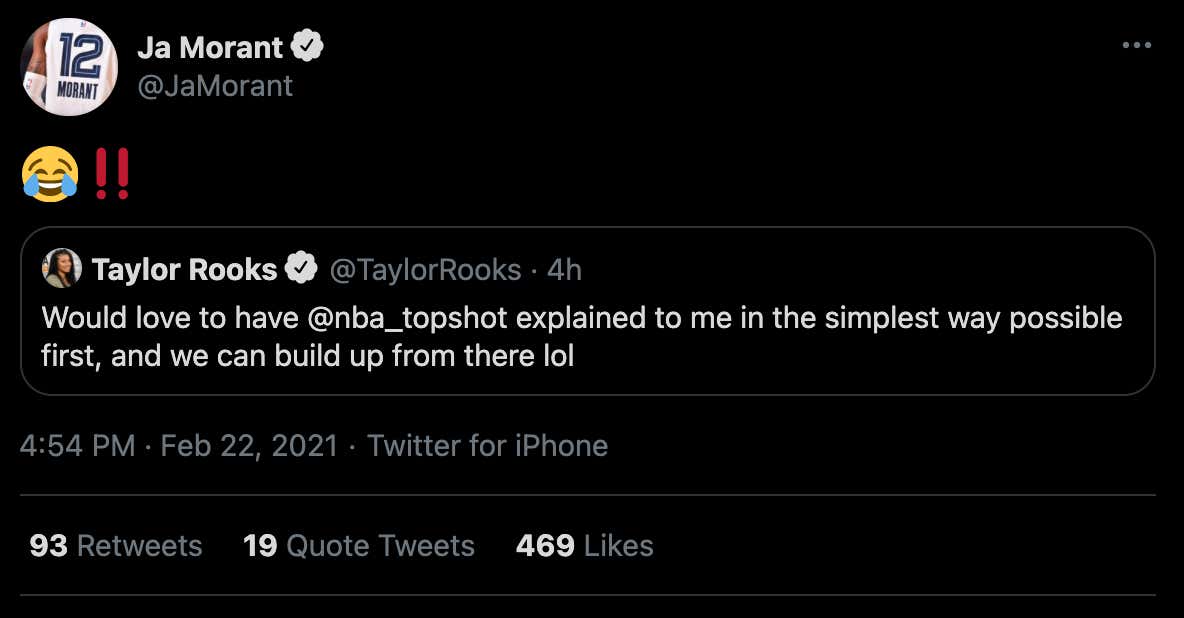 Regardless, it's still so so so early in this thing. Just wait until there are commercials for these things during NBA playoff games. Also how about this guy gifting Josh Hart a moment out of the kindness of his heart only to see Hart put it on sale immediately.

Diabolical, but I respect the move. Wouldn't really recommend selling anything this early, but to each their own. My advice? Hold. Hold. Hold. Don't be Tommy.

If your moment is making a killing and you cannot resist selling, use those profits to buy a big boy. We're not here to flip a quick profit. I don't wanna pay rent with the profits when this is all said and done, I wanna buy an island.

Here's a peak at my friend's account which is valued over $130,000 based on lowest ask (check your account value here). The number on the left is what the moment is worth now. Number on the right is what he got in for. Green number in parenthesis is how much it's gone up since he bought it. That RJ Barrett highlight is just a simple layup. We laughed at him when he bought in, but now it's up 2000%. The LeBron James one is what can happen when you get in on a big boy.

This thing is still so early in its life. The site is still in beta with maintenance being done daily while the interest seemingly doubles or triples by the day. I guess the adult in me should be in on Bitcoin, but I'm all-in on Top Shot and I don't care what people think. Buy buy buy, hold hold hold. Welcome to the future.