WSJ - Fernando Tatís Jr. was 18 years old, just a low-level prospect from the Dominican Republic trying to work his way up in the San Diego Padres farm system, when he made a financial deal that would impact his entire baseball career. And it wasn’t with the Padres.

Tatís signed a contract with Big League Advance, an unusual investment fund that pays minor-league players money up front in exchange for a share of their future MLB earnings.

Tatís, now 22 and widely viewed as one of the sport’s best young stars, today knows what those earnings will be. He agreed to a record-setting 14-year contract with the Padres on Wednesday night worth an eye-popping $340 million, the third-highest total in MLB history.

His new contract also creates a significant obligation for Tatís: to pay a sizable chunk of his new bounty—perhaps close to $30 million—to Big League Advance.

Big League Advance began raising money in 2015 and made its first investment in a player in 2016. The company’s founder and CEO, Michael Schwimer, is a University of Virginia graduate who pitched in 47 games for the Philadelphia Phillies in 2011 and 2012.

Investors in Big League Advance include Cleveland Browns executive Paul DePodesta and Marvin Bush, the son of the late President George H.W. Bush. Schwimer says the company has invested more than $150 million in nearly 350 players so far, none more prominent than Tatís. Many of them never played in the major leagues at all.

Big League Advance’s average pact with players is for around 8%. In the case of Tatís, that would add up to $27.2 million. Representatives for Tatís declined to comment.

Before the accusations that I'm a communist and hate capitalism (like Eddie) start getting thrown around here, let me preface this that I am not, and do not. Love money. Love capitalism. Love working hard and being rewarded.

That said, this seems incredibly predatory does it not?

It's as if these young future stars weren't being taken advantage of enough by slimy friends or family now they have to deal with fancy-suited investment fund managers now too.

I have no problem with people making a buck.

I have a problem with people making a buck off other people that maybe aren't smart enough to make life-changing decisions for themselves.

And I definitely have a problem when they coerce somebody into making a huge decision on their own without somebody smarter's advice.

In their meeting, Schwimer said he told Tatís to envision the possibility that he makes $500 million in baseball and to think about how much he’d have to pay to Big League Advance if that happened. Schwimer didn’t deal directly with Tatís’s agent. After thinking about it, Tatís and his family “ultimately decided that it was the best decision for them at the time,” Schwimer said, with Tatís opting for security at the expense of maximizing his earning potential.

Yes I know he just signed a $340 million dollar deal and $30 million seems like "a drop in the bucket" for that, but that $340 million gets whittled away very quickly when you consider the fact that:

1- he's paying taxes in the dumpster fire that is the state of California.

That's what he's looking at. Over the next 14 years of his life. Playing elite baseball.

You factor all that in, and suddenly that $27 million he has to kick to Big League Advance (what an outrageous "Investment Firm" name) doesn't seem so nominal anymore does it?

These sort of income-sharing agreements are controversial. Not long after Big League Advance began investing in players, the general counsel for the MLB Players Association sent a memo to agents that said, “Many of you have asked whether the Association has endorsed or otherwise approved BLA and its products. The answer is categorically ‘no.’” It went on to advise players and agents to “proceed with caution.”

Agents have criticized Big League Advance’s business model, with some accusing the company of preying on young players who are often Latin Americans who live in poverty and might not fully understand the ramifications of their agreements. Young minor-leaguers historically have made less than $10,000 for the entire season, though MLB recently announced MiLB salaries will increase in 2021 anywhere from 38% to 72%.

So far, legal attempts to nullify deals with Big League Advance have failed.

The thing I don't understand here is his dad played. How was he not giving his kid guidance and telling him not to make a deal like this.

Yes, we know Tatis Jr. wasn't even a Top 50 prospect when he signed his minor league deal. So any money seemed like good money. But this is a flat-out awful deal for somebody that wasn't exactly poor growing up.

The other thing I don't understand is why would Tatis Jr. even need money as an 18-year-old when his father was such an accomplished painter in his post-career?

Have you already forget the masterpieces he collaborated on with Big Cat?

I'm pretty sure this one is hanging in MoMA. 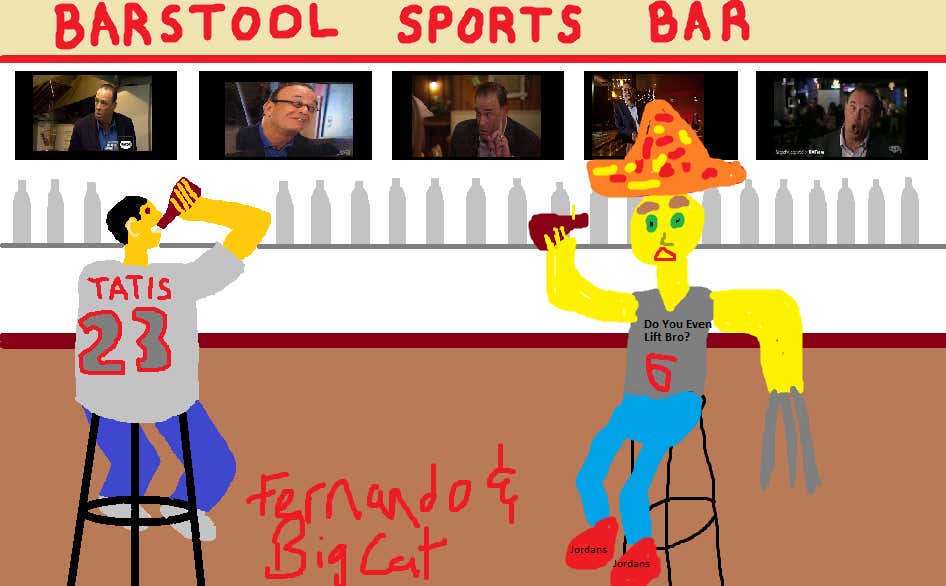 He's had to have made bank off these.

Does he not take care of his family with his art spoils?

I need some answers.

p.s.- We've talked about this on radio and on Dogwalk before, but when I used to work at big boy law firm Katten Muchin, which was Jerry Reinsdorf's "firm", one of the things that made me gain a ton of respect for him was that any player either of his organizations drafted was immediately set up with an in-house financial advisor and attorney who helped guide them with their finances and legal counsel. So so smart. I know a lot of teams do this now but decades ago Reinsdorf recognized the need for this.