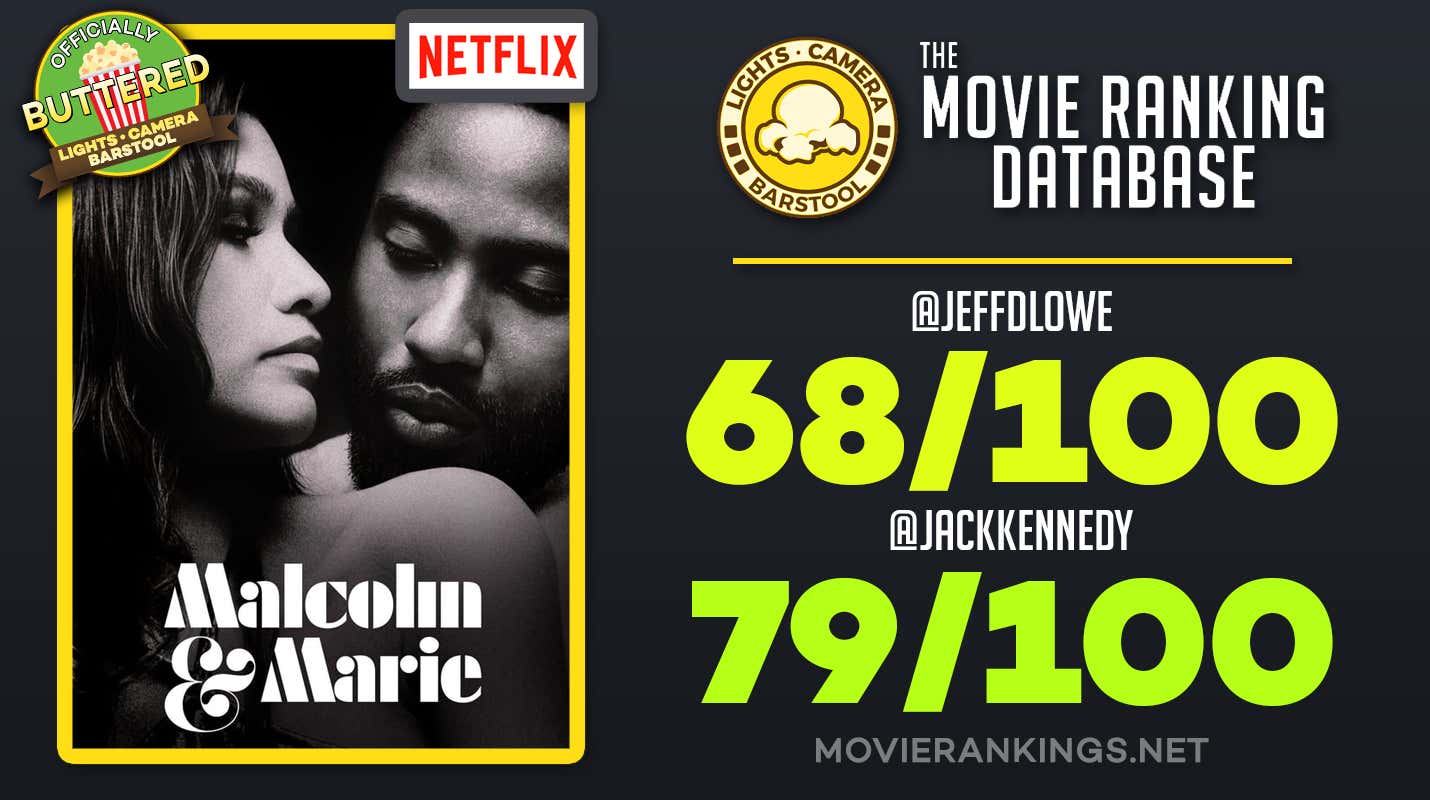 We reviewed this movie last week…

…and have a few thoughts on it.

A filmmaker on the brink of Hollywood glory and his girlfriend, whose story made his career, find themselves pushed towards a reckoning as a single tumultuous night decides the fate of their relationship. (via Google)

So I actually wrote a fairly long review of this movie but ended up losing my notes. So I will now be a lazy mother-fucker and just list everything out in bullet points. Sorry.

In terms of things made in quarantine (I am looking at you, 'Locked Down', you piece of shit), 'Malcolm & Marie' is a valiant effort. It is certainly pretentious at times and comes off as a vessel for Sam Levinson to complain. But there's enough here that it's more than worth the watch, sometimes just watching to stud actors do their thing is good enough for me.

KenJac (79/100): This is a movie that shouldn’t be relatable at all. It’s two industry people coming back from a party, it’s a screenwriter and a model/actress, it’s fighting over and discussing things that none of us can really relate to. That said, I think it sorta found a way to break through that and make me relate to the two main characters on a human level and make us feel something.

I really liked both leads, and really think that their chemistry was out of this world. Basically, the entirety of this movie’s success hinged on their ability to bounce off each other and I really enjoyed how they did. It felt like both of them dominated the screen without either of them taking away from the other. John David Washington is delivering these booming loud monologues attacking with blunt force while Zendaya has these subtle but SHARP lines that cut sharper than his. Honestly, it blew me away how they pulled this off and It made me want to be able to see the two of them perform this on stage.

A lot of the critiques I see about the movie make sense, and I share them. People think it’s preachy/pretentious and I get that. Malcolm’s main gripe is with racism in the film industry, and his attitude and dialogue about it is obviously coming from Sam Levinson who is very much a white dude. One interesting quote that I saw about that was from Kathleen Newman Bremang from Refinery 29. She said “First of all, Black people don’t sit around talking about white people and what they think of us that much. We just don’t.” The way that Malcolm and Marie talk about that is not something I picked out on my first watch, but it’s one that holds a lot of water.

For me, I think that overarching conversation is not what I initially paid attention to. I was more focused on the back and forth between Malcolm and Marie and the nature of their relationship. How they’re both so obviously terrible for each other. How they have this shared experience that they think binds them.  How they’re in this toxic relationship that neither of them wants out of because, in their eyes, the intensity in which they despise each other is the same in which they care for each other. To me, it brings to mind when you see people say “why don’t you leave that person!”, and I think a lot of us have been in a toxic relationship(maybe not to the same degree as this one, but still), or experienced one through family, friends, etc. Watching it and the way they treat each other made me feel very uncomfortable, For others, though, I can see this being a movie that is too uncomfortable to finish.

My main gripe with this movie is that I wish the focus was more on the personal experience between Malcolm and Marie without the meta-conversation on the industry. Outside of that, I still think JDW and Zendaya were outstanding, and their ability to break through the barrier and cause an empathetic response is a success.

--
The movie is Officially Buttered, thanks to a big push from KenJac. You can head to Lights Camera Barstool right here to listen to our latest episode where we interview Jay Duplass of the Duplass Brothers, draft the Best of 2000s Television, breakdown the Snyder Cut 'Justice League' trailer, and review 'Judas and the Black Messiah'.