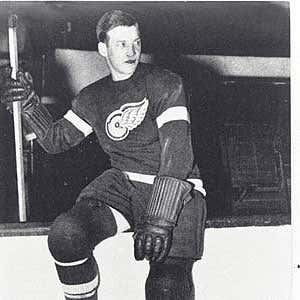 Syd Howe of the Detroit Red Wings becomes the first player to score six goals in an NHL game in 23 years. Howe’s efforts lead the Red Wings to a 12-2 win over the New York Rangers at Olympia Stadium in Detroit. Cy Denney of the Ottawa Senators was the last player with a six-goal game in 1921. The record is seven set by Joe Malone of the Quebec Bulldogs in 1920.

Sydney Howe was born on September 18, 1911, in Ottawa. Howe learned to play hockey on the Rideau Canal in Ottawa. After playing with the Ottawa Gunners Junior Hockey club, Syd Howe made his NHL debut with the Ottawa Senators in 1930. After 12 games with the Senators, Howe was loaned to the Philadelphia Quakers in the 1930/31 season. After the Quakers went on a hiatus, he was picked up by the Toronto Maple Leafs in the dispersal draft.

After spending most of the 1931/32 season, Syd Howe returned to the Ottawa Senators. He spent two seasons in Ottawa before the Senators moved and became the St. Louis Eagles in the 1934/35 season. Before the Eagles were set to fold, Syd Howe was sold to the Detroit Red Wings in 1935. At the time of the acquisition, Syd Howe was serving as the captain of the Eagles. He also served as a captain in the Senators' final season.

Syd Howe had the best years of his career with the Detroit Red Wings. He served as captain of the Red Wings during the 1941/42 season and won the Stanley Cup in 1936, 1937, and 1943. In 1940, he set a record for the quickest overtime goal at 25 seconds against the New York Americans.

In the early days of the NHL, there was a slew of high scoring games in the early days of the NHL as players often played 60 minutes. The first six-goal game in NHL history was by Newsy Lalonde of the Montreal Canadiens on January 10, 1920. Three weeks later, Joe Malone had his record seven-goal game with the Quebec Bulldogs. Malone would add a second six-goal game on March 10, 1920. In 1921, the Denney brothers each had a six-goal game. First, it was Corb Denney of the Toronto St. Pats on January 21st. Cy Denney had his six-goal game on March 7th. It would be more than two decades before the next double hat trick game.

In reaching six goals, Syd Howe had two goals in each period. Don Grosso would play a key role, with five assists as the Wings crushed the Rangers 12-2. In the years since on, Red Berenson with the St. Louis Blues in 1968 and Darryl Sittler of the Toronto Maple Leafs in 1976 have had six goals in a game.