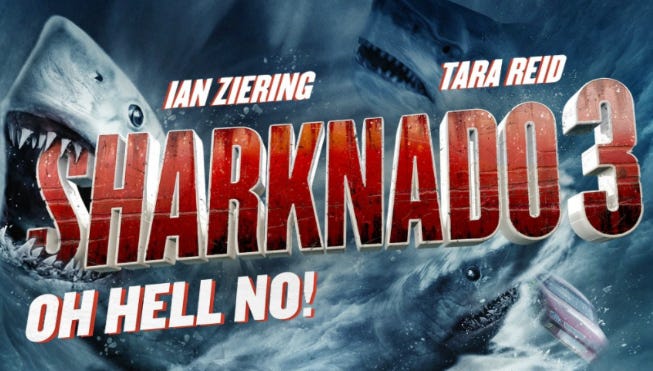 I know it’s July, I know there is very little going on in the world of sports outside of Schwarber, but I have a confession, I hate Sharknado. My only problem is that I should love it. I’m the king of “turn your brain off” television. Some could even argue that I never turn my brain on. I still watch COPS all the time, I’m a religious viewer of the Challenge, love Guy Fieri in an unironic way,  and put Bar Rescue in my top 10 show list. But Sharknado feels different.

You remember in grade school when someone would tell a joke and then the loser kid would repeat the joke hoping to pick up a few extra residual laughs? That’s what Sharknado is. The first one was just totally random and out of nowhere. It became a viral sensation organically. People were bored in the middle of the summer and the movie was so bad it was good. They should have just left it there, but no, they pushed it even more with a second and cheesy cameos and a huge PR staff behind it trying to make things re-viral. Fine, I get how it all works, but now we’re at 3 and I’m totally off it. I can’t do it anymore. I can’t take people making Vines and GIFS of a shark eating Tara Reid and screaming OMG and using emoticons. It physically pains me to be Mr. No Fun here but I just can’t do it. If it weren’t for twitter, the very thing that created Sharknado 1, I would probably love this series, but now it all seems so forced and calculated. Watching Sharknado tonight is letting the suits win. You’re letting them shove jokes down our throat over and over until we’re puking jokes on ourselves and can barely breathe. I understand if you watch it, especially if you’re a DC person because I would watch it if the sharks ate Wrigley, but I’m out, I just can’t do it anymore, Sharknado has jumped the shark for me.